A Nickelodeon Green Slime candy bar? Not quite – but pretty close!

To my knowledge, Nickelodeon never licensed its Green Slime property to the confectionery business.  But wouldn’t it have been a great idea if they did?

Even though Nickelodeon never produced an official Green Slime bar, the folks at Australia/New Zealand’s Cadbury division came up with something pretty darned close.  And I’ll be revealing that bar wrapper in just a minute.

Green Slime became the sort of unofficial mascot/stuff of Nickelodeon through their licensing as well as its use during Nick’s Kids Choice Awards shows.  But its use and connection to Nickelodeon goes back to a show I watched quite a lot of in the 1980’s, “You Can’t Do that on Television”.

On YCDTOTV, anytime one of the young actors would make the statement “I Don’t Know”, green slime would pour from the rafters onto their head.  In the same way, anytime one of the actors would say “water”, they’d get similarly drenched.  It was silly goofy fun, and it was just one of the factors that made You Can’t Do That On Television a great program.  What can I say – I’m a fan.

Here’s a clip from YouTube of them dumping multiple colors of slime upon Christine, the original host:

By the 1990’s, YCDTOTV was gone, but the green slime remained, and still does today.

In spite of quite a lot of licensing for Green Slime over the years, it never got the candy bar treatment.   But Cadbury did give us something that screamed Nickelodeon Green Slime;  1997’s Ooze Bar!

You won’t find an image of the Ooze Bar! anywhere else on the internet, so this is another CollectingCandy.com world exclusive.  And here it is: 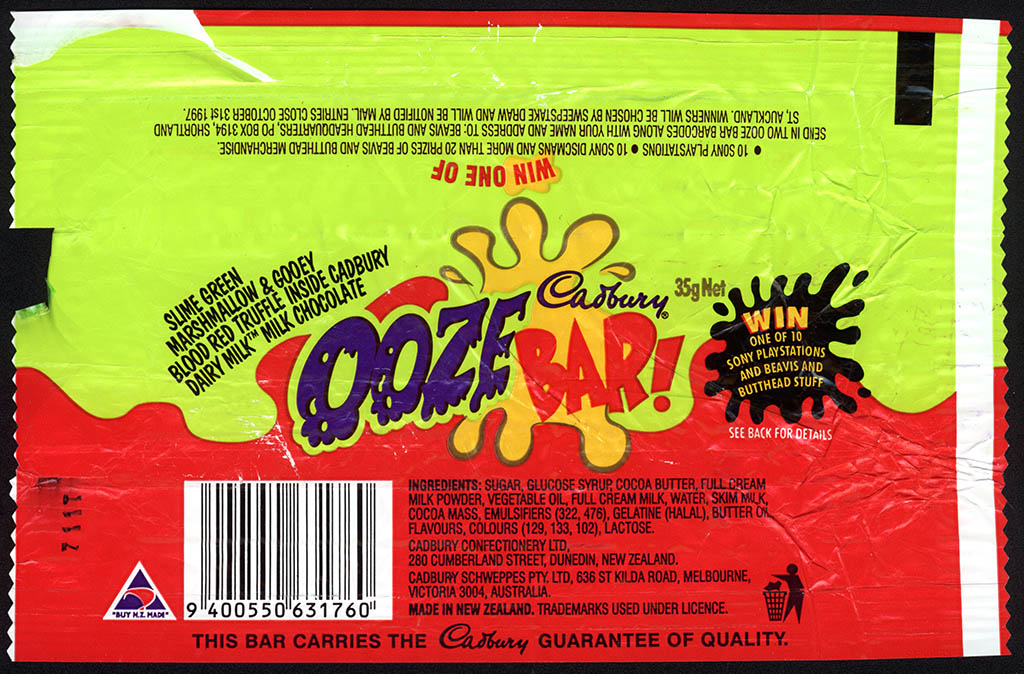 I love this wrapper, as it evokes the look of what made 1990’s Nickelodeon designs so fun.

Before I go, I will note that we did get some form of Nick’s Green Slime in edible form – That was General Mills’ Green Slime cereal.  This was on store shelves back in 2003: 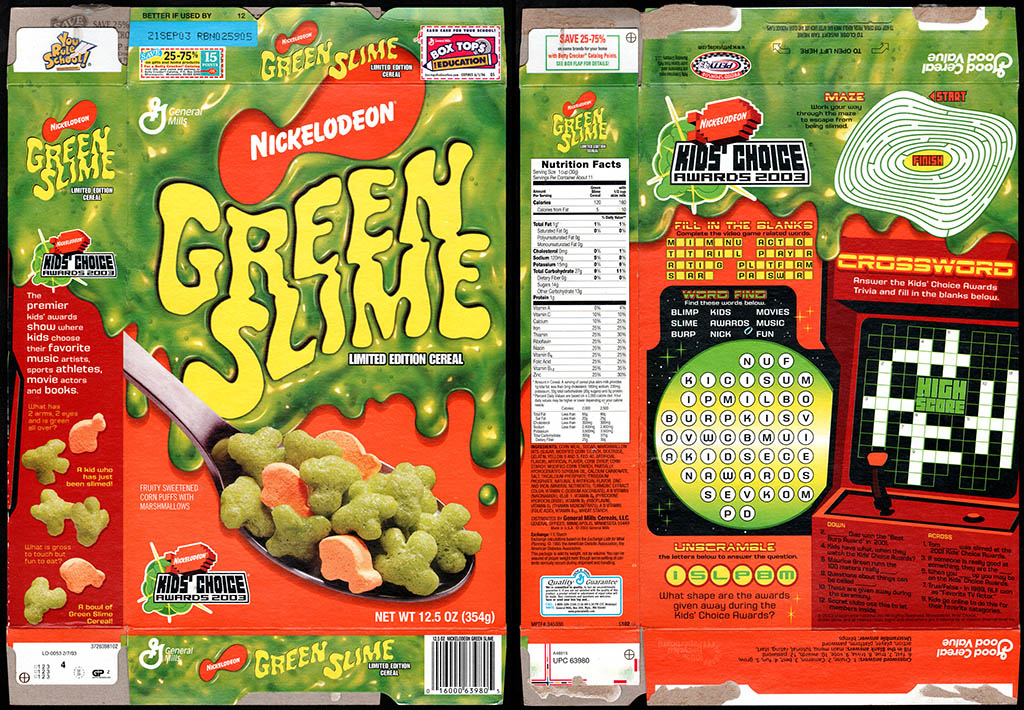 And that’s all I’ve got today on Green Slime and candy bars.  I hope you all enjoyed getting to see Cadbury’s Ooze Bar! wrapper – it’s a fun one!   See you next time!

A New York City based writer, editor and sometimes actor. After spending much of the 1990′s in the comic book business helping tell the stories of Marvel Comics’ X-Men as series editor, he has since split his time between developing his own entertainment properties while still consulting and working on others. Having been described as “the Indiana Jones of lost and forgotten candy”, Jason is one of the country’s premier candy collectors and historians with his discoveries appearing in countless blogs, magazines, newspaper articles, and books. Always happy to share his knowledge and unique perspectives on this colorful part of our popular culture, Jason has consulted with New York’s Museum of Food and Drink and has also been a featured guest on Food Network’s Heavyweights, France’s M6 Capital, and New York’s TheActionRoom.com. My Google Profile+
View all posts by Jason Liebig →
This entry was posted in 1990's, Novelty and tagged Cadbury wrapper, candy collecting, candy collection, candy collector, candy wrapper collection, candy wrapper collector, collectible, collecting candy, confectionery, confections, green slime, green slime candy, New Zealand candy, Nickelodeon, packaging, sweets, vintage candy wrapper, wrapper, You Can't Do That On Television. Bookmark the permalink.

4 Responses to A Nickelodeon Green Slime candy bar? Not quite – but pretty close!