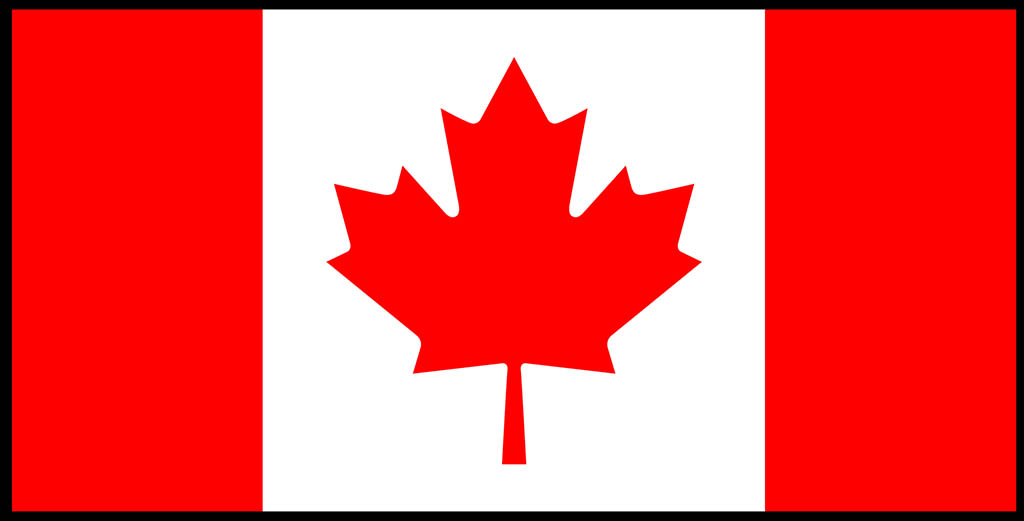 Canada Day was yesterday, though most Canadians have the day off of work today due to the holiday, so this is for my Canadian friends on their extra day-off – I hope you’re having a great one!   While I’m getting to this a day late, I still wanted to acknowledge the day with a bit of Canada-themed candy packaging.

First up is a great Canada-themed box for Smarties.  This limited edition box actually gives the brand a special name which cracks me up; Smarties, Eh?

The candies themselves are red and white with Canada’s maple leaf emblazoned upon them.  Great stuff: 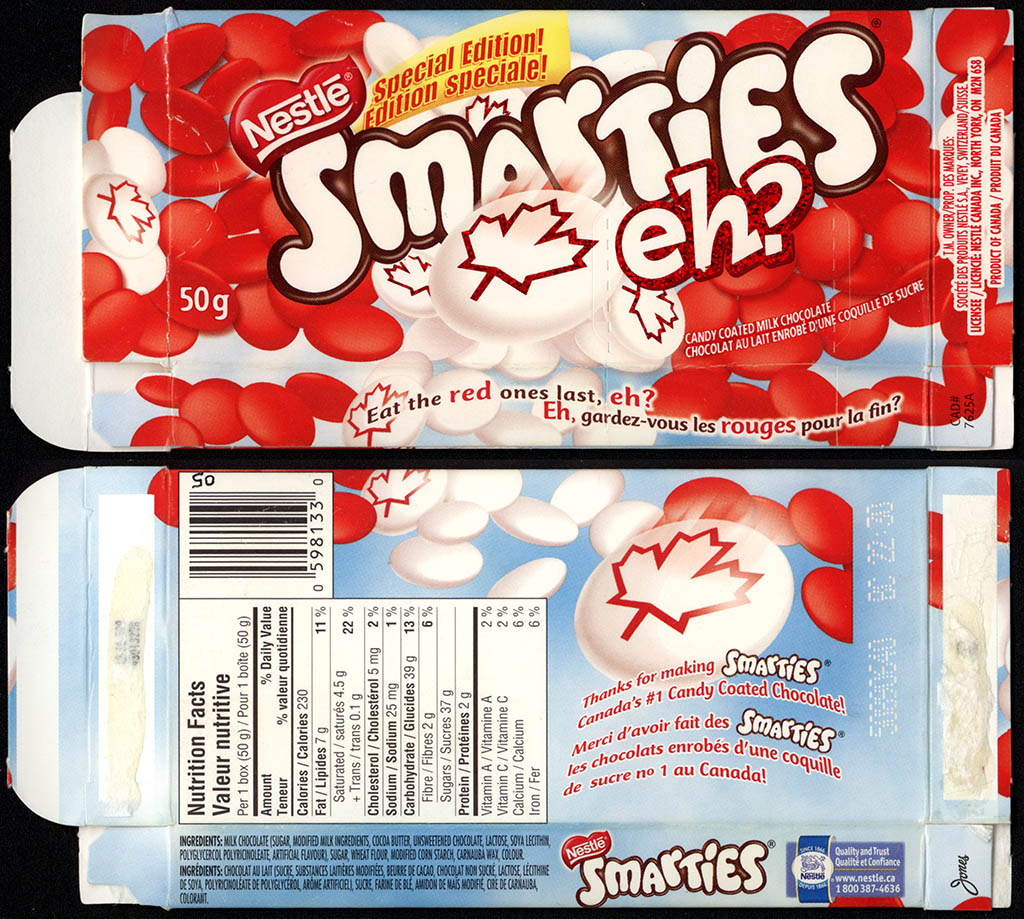 The other packaging I’d like to share today is a bit of a stretch as it’s not actually a Canadian product, but one which takes the name: Necco’s Canada Mints and Wintergreens.  These days, most of you will recognize these as something you’d find “at Grandma’s house”, but they used to be more of a candy isle staple. 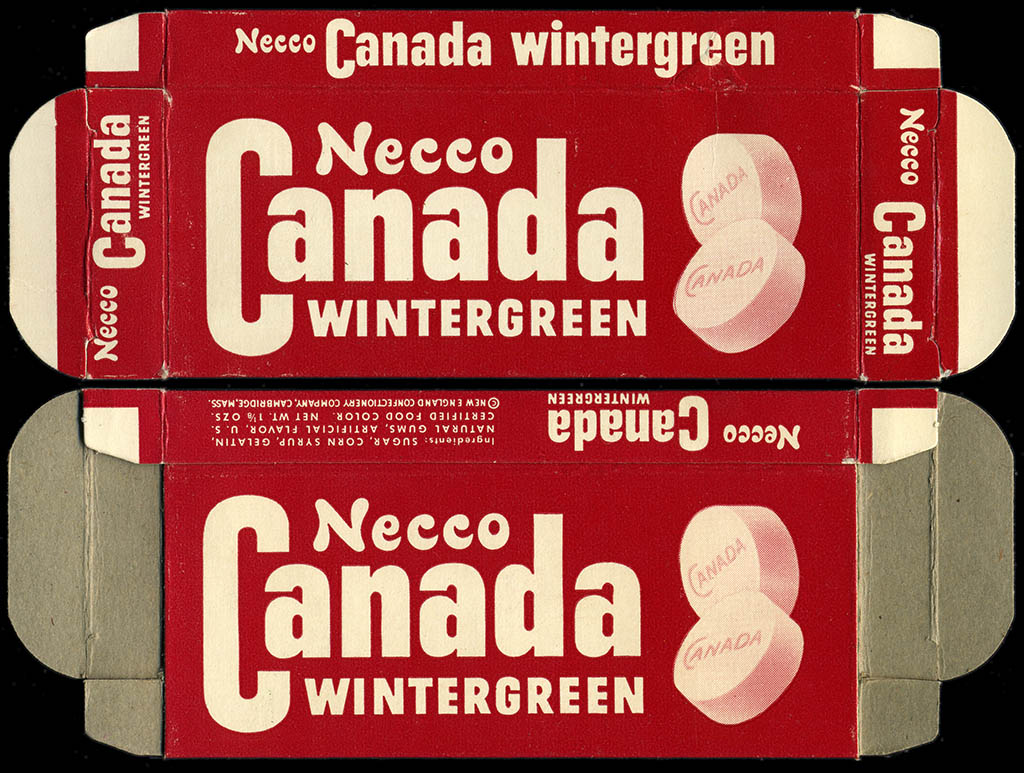 I love that blobby mid-century Necco logo on the 1950’s boxes – fun stuff.  Here are a pair of boxes for the same products, from two decades later: 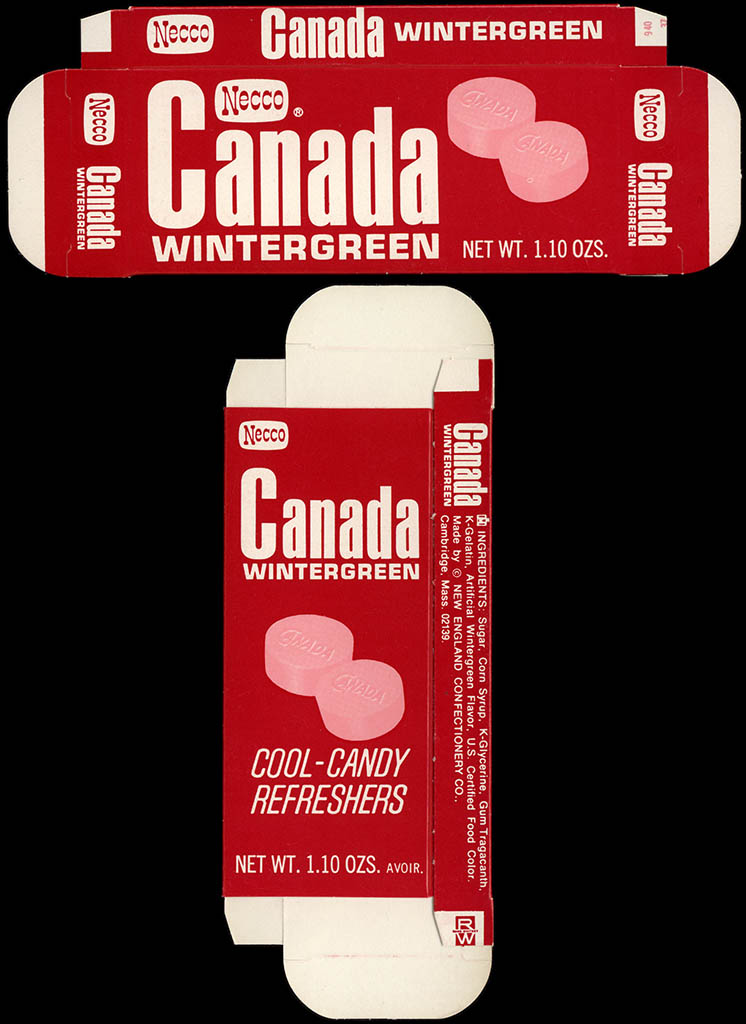 Those boxes look pretty old-fashioned these days, though the Necco brand logo they feature is the one we still have today.

I tried to find current versions of Necco’s Canada box lineup, but I was unable to do so.  I don’t think they’ve been sold in small-size boxes for some time (though I may just have not seen them).  The Necco website only has images of their Canada product in larger poly bags:

And that’s everything for our humble acknowledgement of Canada Day. See you back here tomorrow!!

A New York City based writer, editor and sometimes actor. After spending much of the 1990′s in the comic book business helping tell the stories of Marvel Comics’ X-Men as series editor, he has since split his time between developing his own entertainment properties while still consulting and working on others. Having been described as “the Indiana Jones of lost and forgotten candy”, Jason is one of the country’s premier candy collectors and historians with his discoveries appearing in countless blogs, magazines, newspaper articles, and books. Always happy to share his knowledge and unique perspectives on this colorful part of our popular culture, Jason has consulted with New York’s Museum of Food and Drink and has also been a featured guest on Food Network’s Heavyweights, France’s M6 Capital, and New York’s TheActionRoom.com. My Google Profile+
View all posts by Jason Liebig →
This entry was posted in 1950's, 1970's and tagged 1950's candy, 1970's candy, 50's candy, 70's candy, Canada, Canada Day, Canadian candy, candy collecting, candy collection, candy collector, candy wrapper collection, candy wrapper collector, collectible, collecting candy, confectionery, confections, Necco, New England Confectionery Company, packaging, sweets, vintage candy wrapper, wrapper. Bookmark the permalink.