Carlos V – Building a history for the King of Chocolate Bars.

I first became aware of Nestle’s Carlos V bar a year or two ago, when I saw the oddly-smallish bar at a Walgreens.  At the time I wondered if it was an import or a new Nestle product, but I soon learned that it had a much richer history in Mexico.

Here’s the modern wrapper that was my first encounter with this brand: 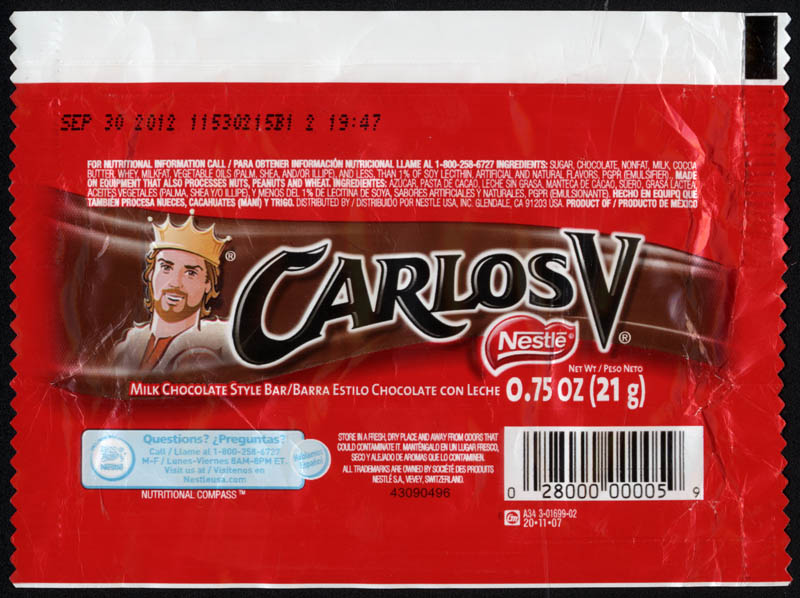 Though I’d run into a few earlier wrappers from the late 1990’s and earlier 2000’s, I’d never seen any truly vintage wrappers for this brand, until I discovered the examples in the L.M. Kallok Collection.

The background on this brand is not documented at all, at least not in English, and not that I could find.  While I can’t add much to the hard data on the history of the brand, I can put forth a number of these vintage wrappers, which can’t be found anywhere else online.  My hope is that these vintage wrapper images can serve as a foundation for piecing together the evolution of the brand.

These wrappers are undated, but based on my sense of them, I’m placing them in the order I think they belong.  Starting with this one: 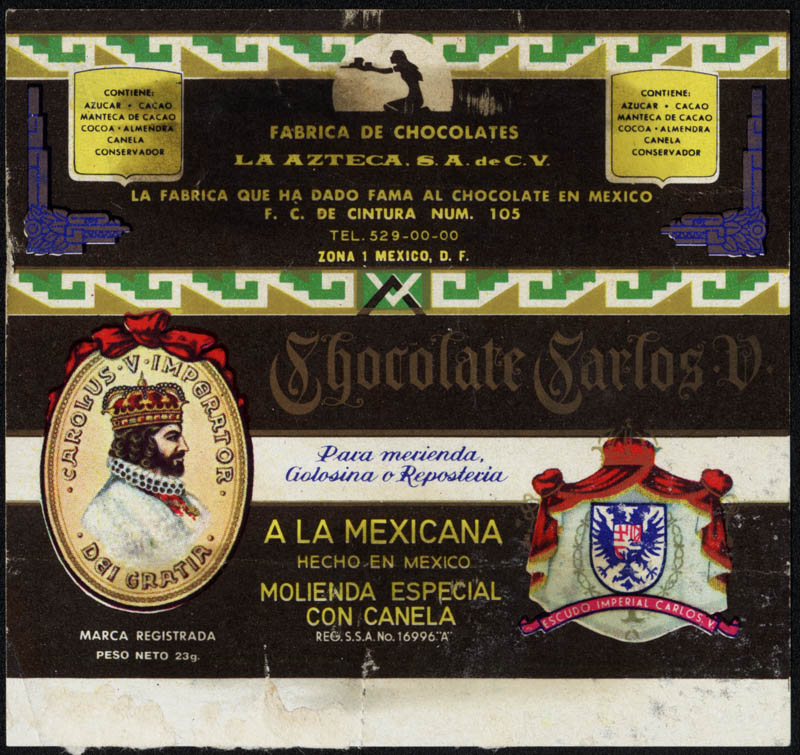 La Azteca is the company name that is listed on all of the Carlos V wrappers, up until the time when Nestle bought them out.  And that wrapper certainly had the oldest style look to it. 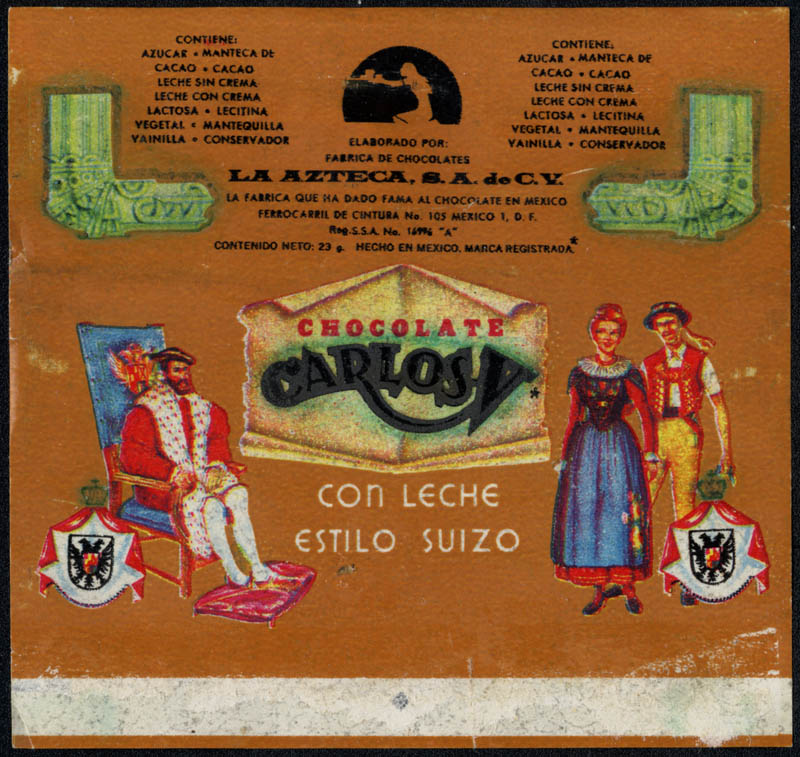 This next style would seem to have been marketed for English-language markets: 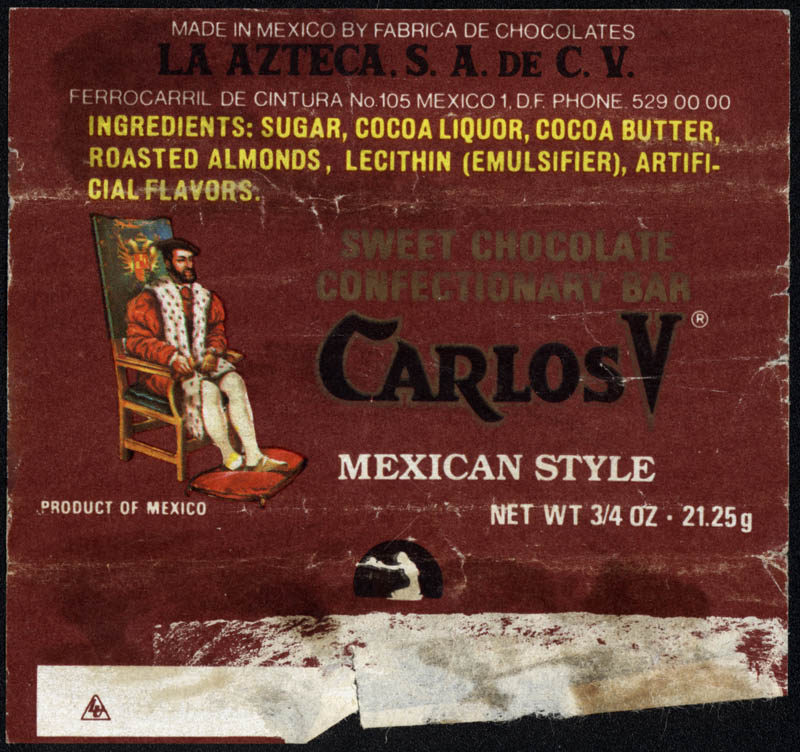 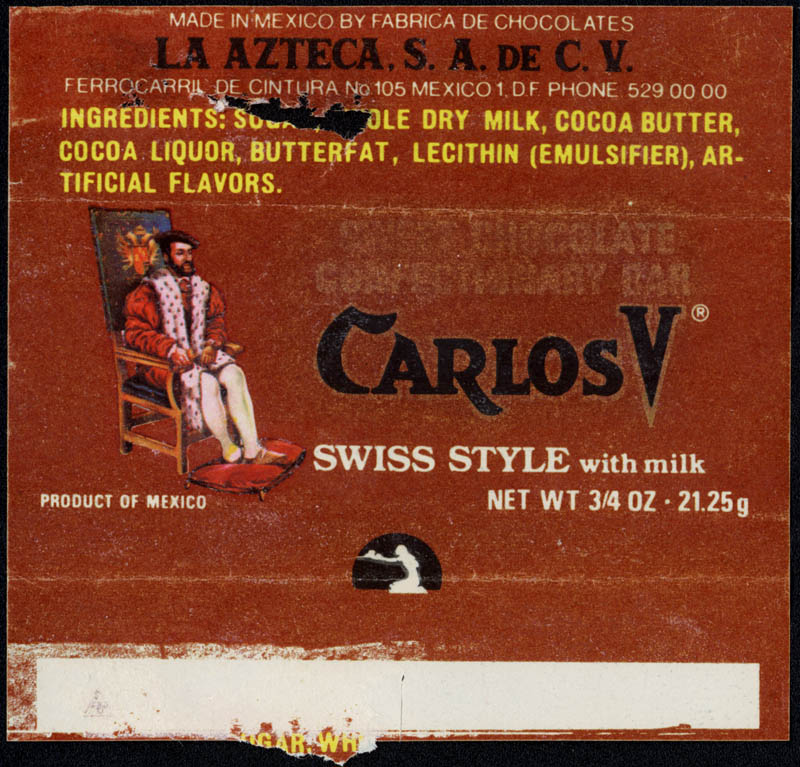 Changing it up on this next wrapper is a cellophane version, this time another all-Spanish language wrapper.  It’s safe to say that this wrapper falls into the 1980’s, maybe even into the 1990’s: 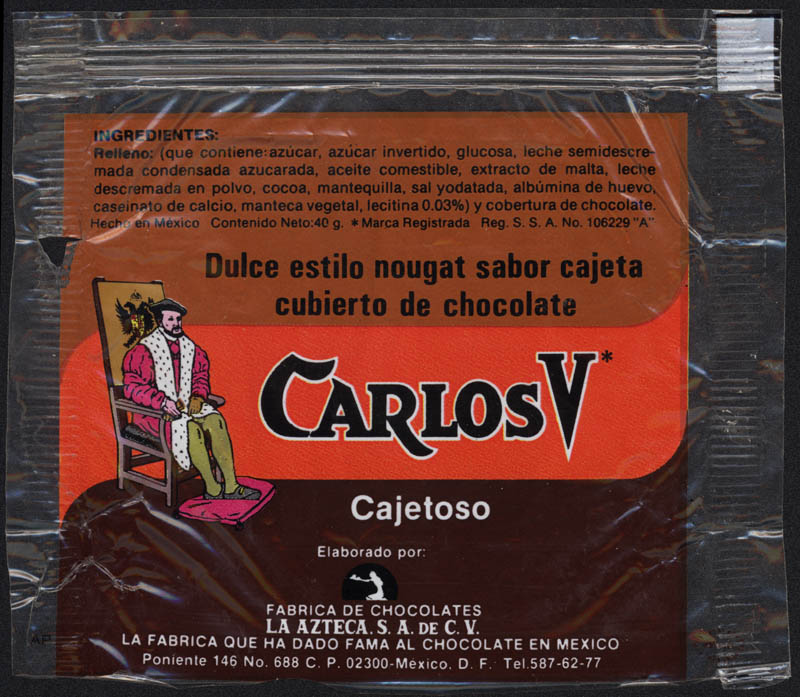 The next of the La Azteca Carlos V wrappers I have sports a tie-in with the film Toy Story, which tells us La Azteca was still the brand’s sole owner as late as 1995: 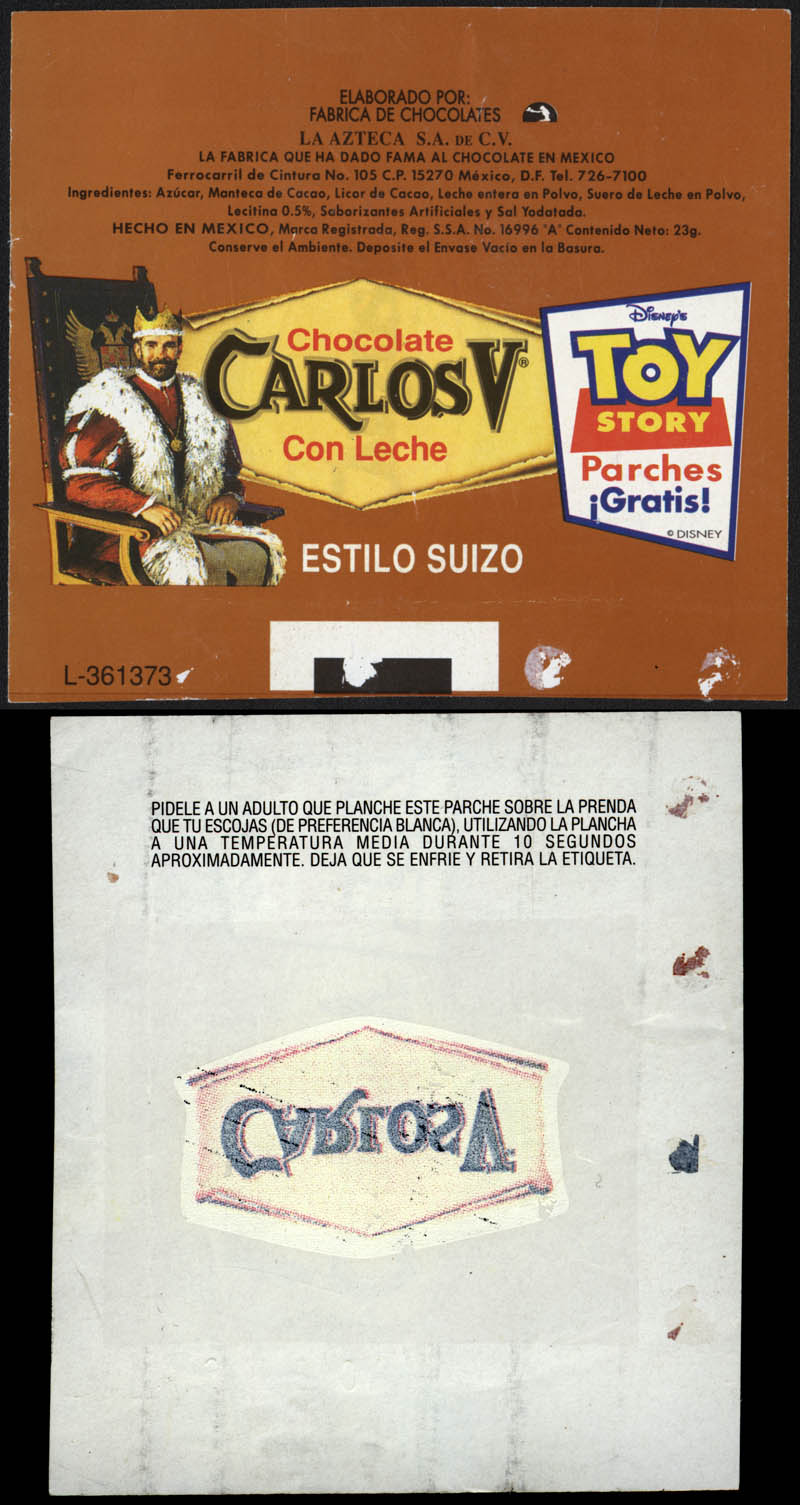 The next Carlos V wrapper, and final one including the La Azteca name, is an interesting example, as it also shows Quaker as a parent company or distribution partner. 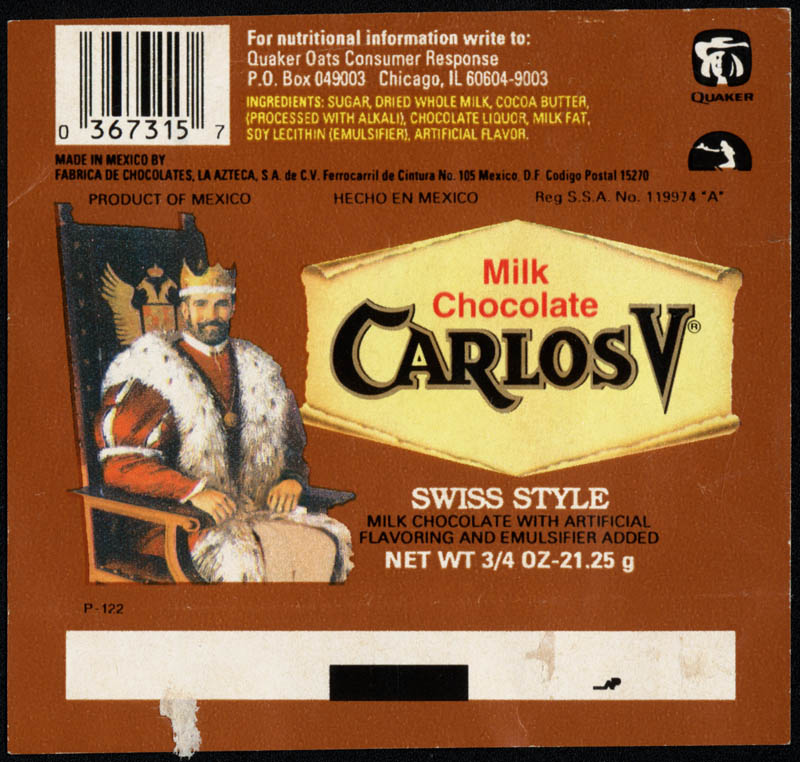 Last but not least is the earliest Nestle-branded Carlos V wrapper I have.  It features a design nearly identical to the latest La Azteca version I have: 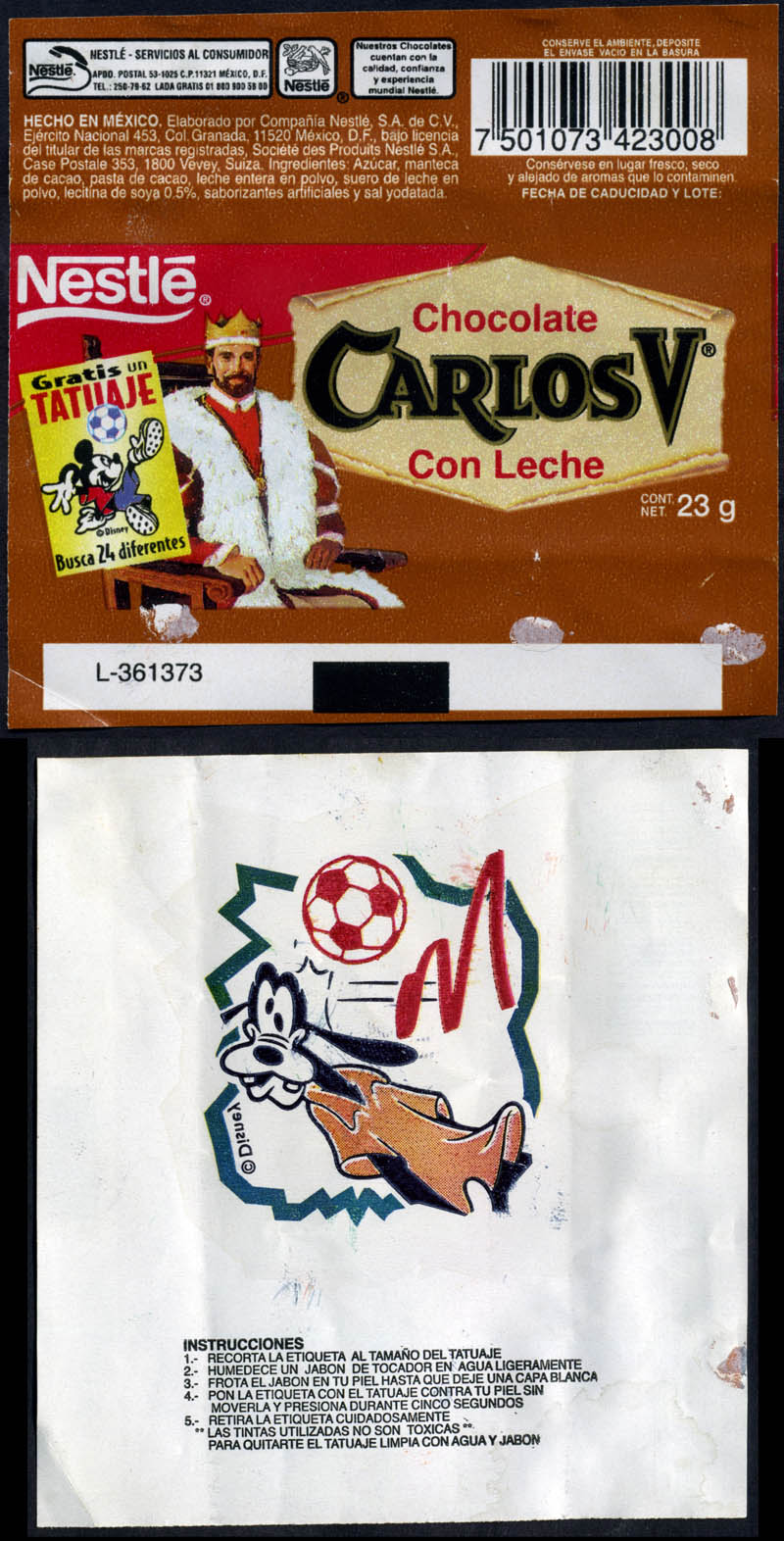 So that rounds out the variety of Carlos V wrappers presented today.  If anyone out there knows specifics on the pre-1990 history of the Mexican “King of Chocolate Bars”, please share.

I’ll close with a visual timeline-of-sorts.  No dates, but a nice way to showcase the major styles of wrappers show here, collected into one visual: 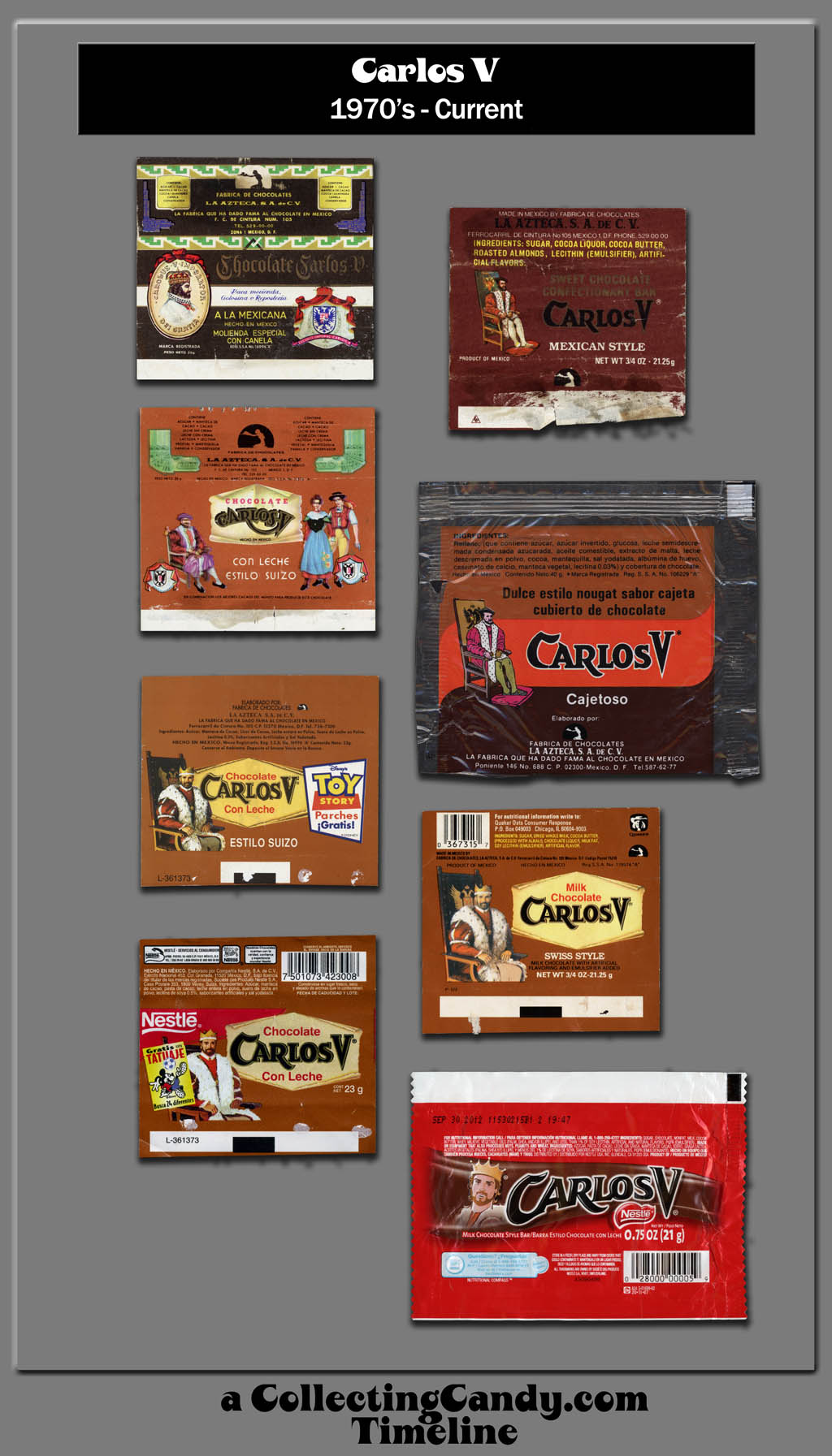 A New York City based writer, editor and sometimes actor. After spending much of the 1990′s in the comic book business helping tell the stories of Marvel Comics’ X-Men as series editor, he has since split his time between developing his own entertainment properties while still consulting and working on others. Having been described as “the Indiana Jones of lost and forgotten candy”, Jason is one of the country’s premier candy collectors and historians with his discoveries appearing in countless blogs, magazines, newspaper articles, and books. Always happy to share his knowledge and unique perspectives on this colorful part of our popular culture, Jason has consulted with New York’s Museum of Food and Drink and has also been a featured guest on Food Network’s Heavyweights, France’s M6 Capital, and New York’s TheActionRoom.com. My Google Profile+
View all posts by Jason Liebig →
This entry was posted in 1970's, 1980's, 1990's, Chocolate, Nestle, Uncategorized and tagged 1970's, 1980's, 1990's, 70's, 80's, 90's, antique, Azteca, candy, chocolate, collectible, collecting, collection, confectionery, king, Mexican, Mexico, Nestle, old, packaging, retro, Spanish, sweets, vintage, wrapper. Bookmark the permalink.

5 Responses to Carlos V – Building a history for the King of Chocolate Bars.