The Sears Candy Shop! Plus: The Return of WishbookWeb.com!

Years before I launched CollectingCandy.com, I mounted an effort to create an online archive of vintage Christmas catalogs, like the old Sears Wishbooks.  That vintage Christmas catalog website was and is WishbookWeb.com and this week and I relaunched WishbookWeb with a bundle of all-new features, accessibility, and a brand-new look.  So today I’ll be connecting to that site’s return by first taking a look at Sears’ own in-store retail candy outlet called “The Candy Shop”.  Make the jump to check it out!

The idea of Sears having its own candy shop might seem like a foreign idea to most folks these days, but there was a time when retail stores like Sears branched out in all sorts of ways, like including a restaurant or diner on the premises of the store.  Given that context, the idea of a small candy store set inside of a Sears location isn’t that crazy.  I wish I had photos of what an actual Sears candy shop looked like, but sadly I do not.  What I do have are two pieces in my archives that originated from the Sears candy shops; a bulk candy retail bag, and a chocolate bar wrapper.  Let’s take a look.

First up is the retail bag.  This one is from 1980 and sports the snazzy “The Candy Shop” logo included in today’s title image.  Check the back of the bag for a list of some of the products offered at The Candy Shop in Sears at the time – sounds like appealing, old-fashioned goods which helps me imagine what kind of candy shop it was: 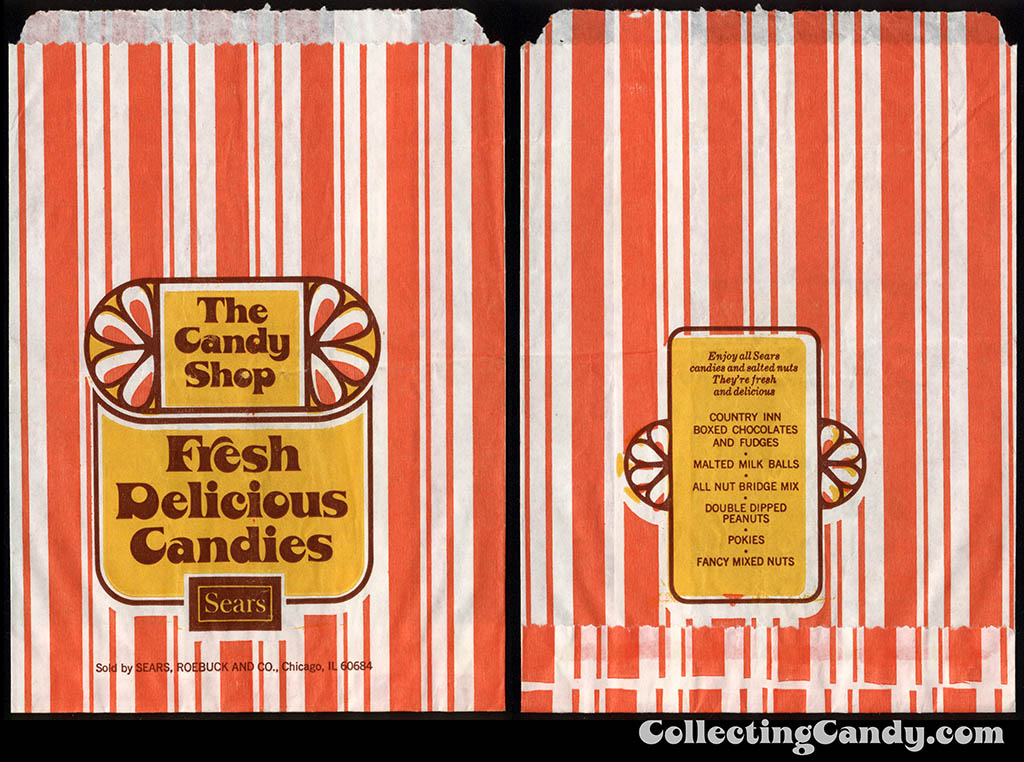 Jumping ahead a few years, Sears even had their own branded chocolate bar.  While this might seem like an oddball piece to most, these types of unusual store-branded wrappers and pieces of packaging are some of my absolute favorites to track down and share.  Note that it features the more modernized Sears logo (introduced around 1984-85, according to my research) as well as the “The Candy Shop” branding: 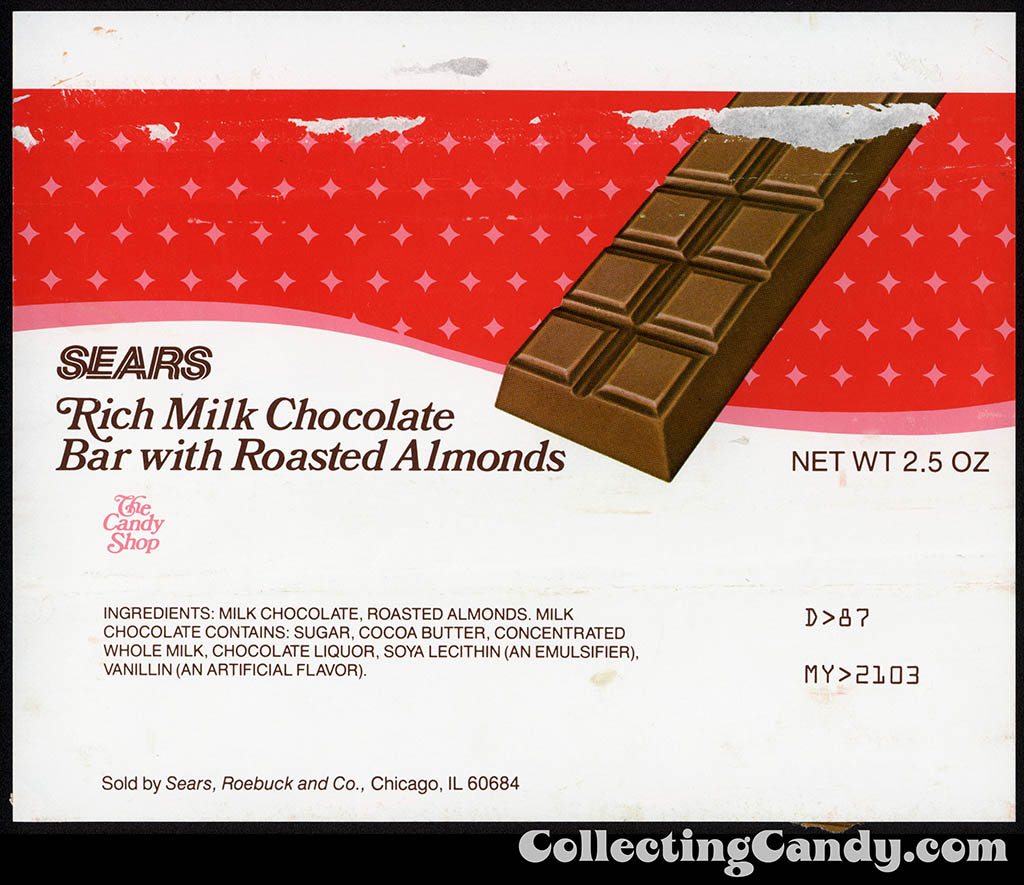 Unfortunately, those are the only pieces of Sears’ The Candy Shop ephemera or images I’ve ever come across, but I am always on the lookout for more.  I think it’s fascinating to consider how varied and diverse the retail offerings of a brick-and-mortar store like Sears once were.  It seems like such a novel, even foreign concept now.

Posting about Sears’ The Candy Shop today is partly because I think it’s a fun thing to look at, but also because of the relaunch this week of WishbookWeb.com – which is something I want to share with as many people as I can.

The following nine-year-old interview from January 2008 describes some of the early background of the site pretty well (note my stated desire to make the catalogs text-searchable): 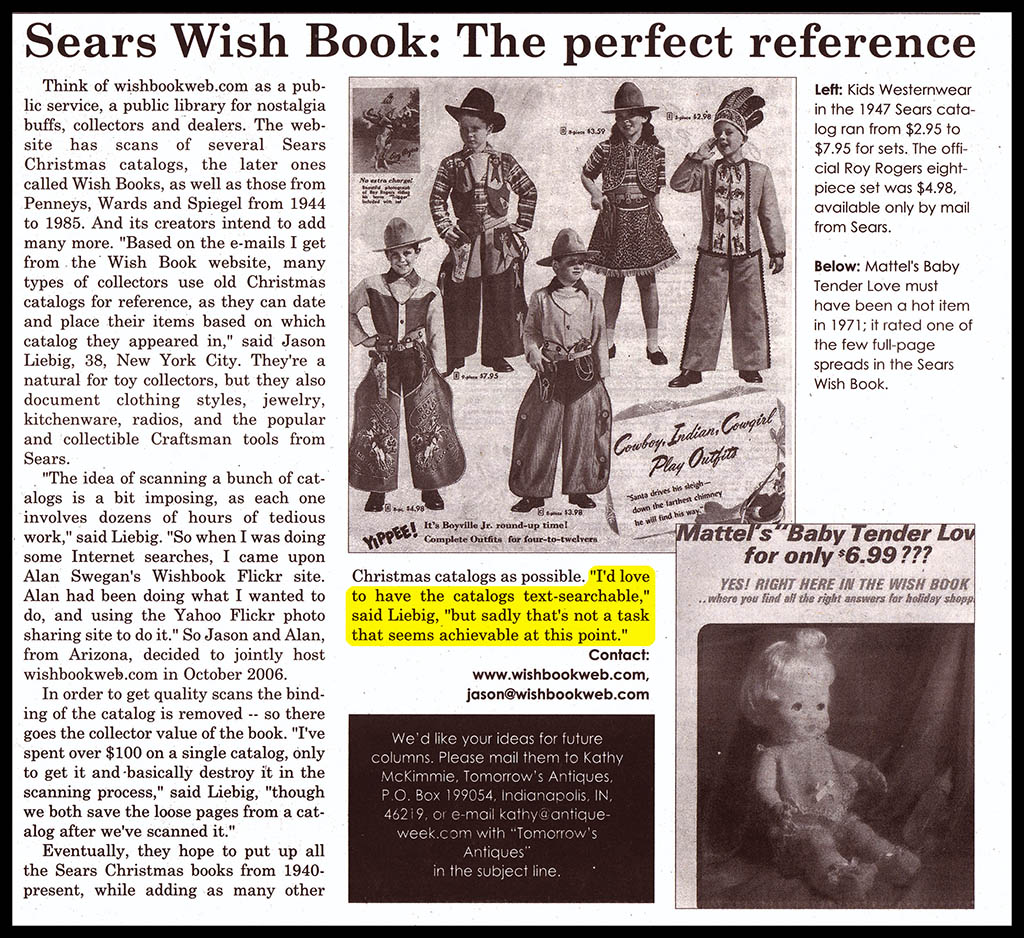 For its first decade of existence, WishbookWeb.com was a fairly blunt instrument insofar as interfacing with the catalog content was concerned.

I initially sought a way to serve the images we’d scanned by using one of the online gallery-creation programs available at the time (circa 2005).  But whenever I threw the requirements of the full catalogs at these programs (sometimes more than 500 pages in a single gallery), they would inevitably fail.  I finally found a method that worked and it became the default interface (I used a Photoshop slideshow output).  But there was no text search and when mobile devices like smart phones and tablets began arriving on the scene in the years that followed, the site was nearly unusable on them.  As I said, a fairly blunt instrument.

Early on, the front page of WishbookWeb.com looked like this: 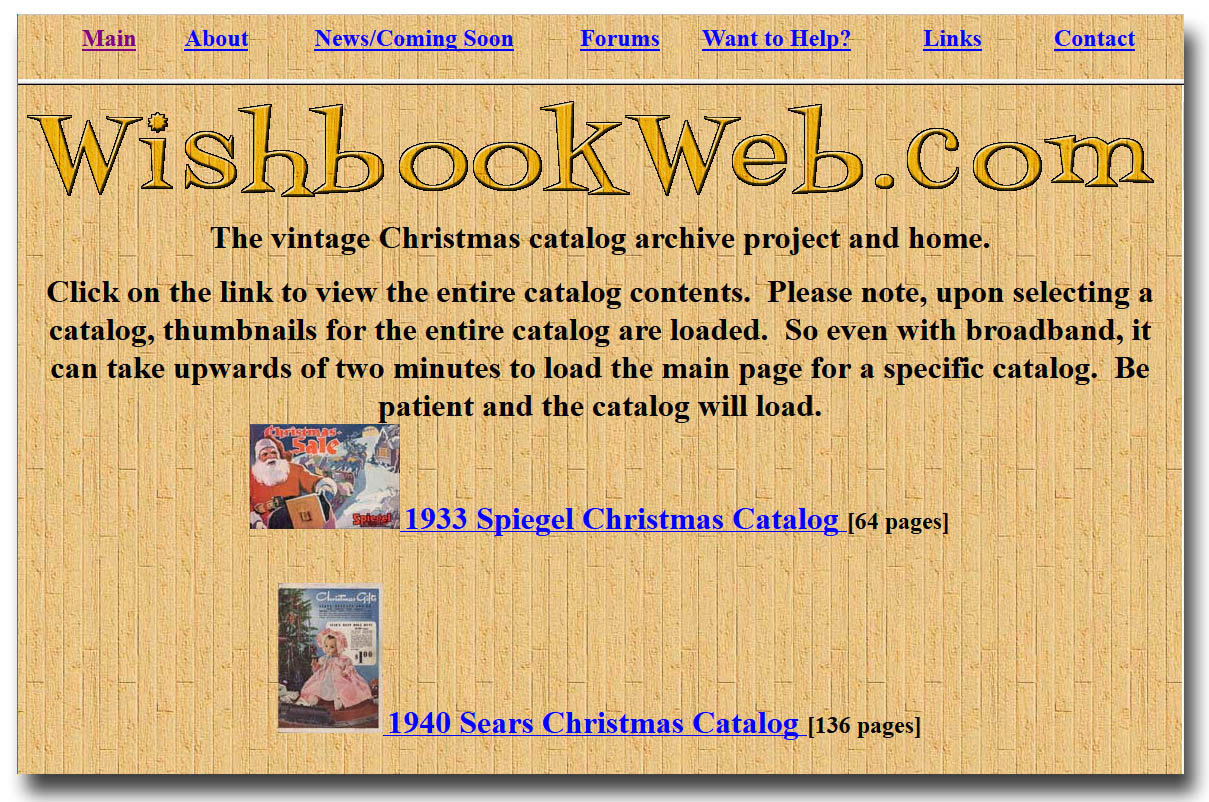 So, it had been a long time that I’d wanted to find a way to update the site while holding onto the dream of making the catalogs text-searchable as well as accessible on mobile devices.

I would finally find a piece of software to do the trick, allowing me to present the catalogs as lush flipbooks complete with text-search capability.  But even after purchasing that high-end software, the task of conversion to the new flipbook format proved to be a daunting task.  It would take another year for me to carve out the significant blocks of time needed for the time-consuming, multi-step conversion process.  But finally I was able to do it and on February 10th, 2017 WishbookWeb was relaunched in what I’ve been informally calling “WishbookWeb 2.0” format.

Here’s a look at the top of the newly-relaunched catalog navigation page: 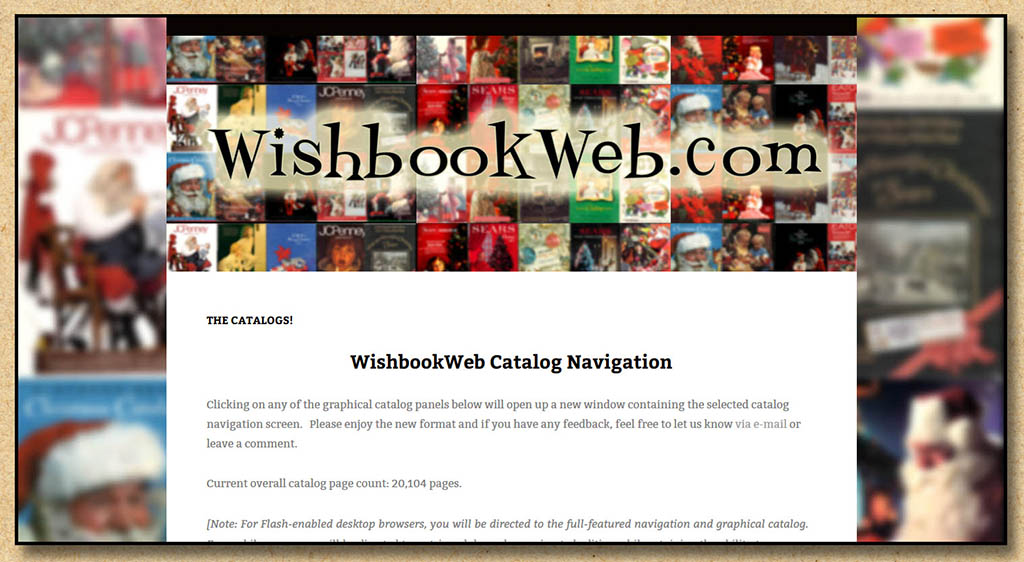 I also created a custom launch pane for each catalog.  Here are a few of them (they’re a little tiny here, but they are perfectly legible over on the site):

Here’s an Instagram video I created showcasing some of the new features:

And that’s sort of the whole shebang.  WishbookWeb has always been the combined product of countless hours of work, and the conversion to a modern format and interface has been another mountain of effort on top of that.  But the hard work on the existing archive is now done and the fun can finally be had by anyone and everyone out there who might want to visit these awesome old catalogs.  And I hope you do – they’re pretty neat.

Beyond all of what is available on the site right now, I plan for this relaunch to serve as a strong foundation going forward with LOTS of additional catalog content to be added in 2017.  I think it’s going to be a great year for the site – this is just the beginning!

For now though, that’s everything I’ve got on WishbookWeb.com and the unexpected candy shops once found in Sears retail stores.  See you next time!

A New York City based writer, editor and sometimes actor. After spending much of the 1990′s in the comic book business helping tell the stories of Marvel Comics’ X-Men as series editor, he has since split his time between developing his own entertainment properties while still consulting and working on others. Having been described as “the Indiana Jones of lost and forgotten candy”, Jason is one of the country’s premier candy collectors and historians with his discoveries appearing in countless blogs, magazines, newspaper articles, and books. Always happy to share his knowledge and unique perspectives on this colorful part of our popular culture, Jason has consulted with New York’s Museum of Food and Drink and has also been a featured guest on Food Network’s Heavyweights, France’s M6 Capital, and New York’s TheActionRoom.com. My Google Profile+
View all posts by Jason Liebig →
This entry was posted in 1960's, 1970's, 1980's, Chocolate, Christmas, Private Label and tagged candy collecting, candy collection, candy collector, candy wrapper collection, candy wrapper collector, Christmas, Christmas Catalog, collectible, collecting candy, confectionery, confections, packaging, packaging design, private label, Sears, sweets, vintage candy wrappers, vintage christmas catalogs, WishbookWeb.com, wrapper. Bookmark the permalink.

15 Responses to The Sears Candy Shop! Plus: The Return of WishbookWeb.com!