Between 1976 and 1985, red M&M’s were banished from the world due to a Russian “red scare” having to due with a food dye additive.  It is a story that has been told before, but newly discovered evidence reveals an aspect of the tale that has never been considered before now; how M&M’s own red scare may have delayed the rise of their globally-popular mascot characters for twenty years.  Make the jump to check it out!

If you are of a certain age or have a passing interest in M&M’s history, you may already know that red M&M’s were removed from the color mix for many years.  The popular mythology goes that the red dye used in the M&M’s at the time caused cancer, but that’s not the actual story.   A detailed history of why red M&M’s disappeared for a decade was expertly brought together by Zachary Crockett for the Priceonomics website back in 2014.  I will share snippets of the same information here, but I highly recommend reading that insightful full original article.

As the story goes, a Russian study of “Red Dye No.2” in 1970 concluded that the dye caused cancer in rats.  While that study would turn out to have been deeply flawed, by 1975 the word had spread and consumer fear in the United States had grown.   A good deal of media/consumer outcry combined with an abundance of caution by the FDA led to the government organization banning “Red Dye No. 2” in 1976.  And even though M&M’s had never used the dye (red M&M’s were produced using the less-controversial Red Dye No.40), the color was removed from the mix to avoid bad press or PR caused by consumer confusion.

It wasn’t until a decade later and a few passionate fans’ letter-writing campaign that red M&M’s were produced once again in late 1985 for a holiday mix, finally returning to the standard mix the following year.  And so, the red M&M’s decade-long exile came to an end.   The red M&M’s mascot character would also eventually return and ultimately go on to become the de-facto sardonic spokesperson for the M&M’s family of characters.

But that’s not the only story to tell, because I recently discovered a remarkable vintage M&M’s package I never knew about, and one that had never been documented before.  An M&M’s package from the time leading up to the original red M&M’s ban.  It is a tale that requires some backstory to fully appreciate.

M&M’s mascots have been around since the earliest days of the brand going back to the 1940’s and 1950’s.  Featured in ad campaigns and television commercials and even in-store displays, the mascots wouldn’t appear on actual M&M’s packs until the 1980’s and still wouldn’t become standard on wrappers until 1997.  During those early days, M&M’s packs were all about the “M&M” branding, as you can see here on each of these early 1960’s and early 1970’s packs: 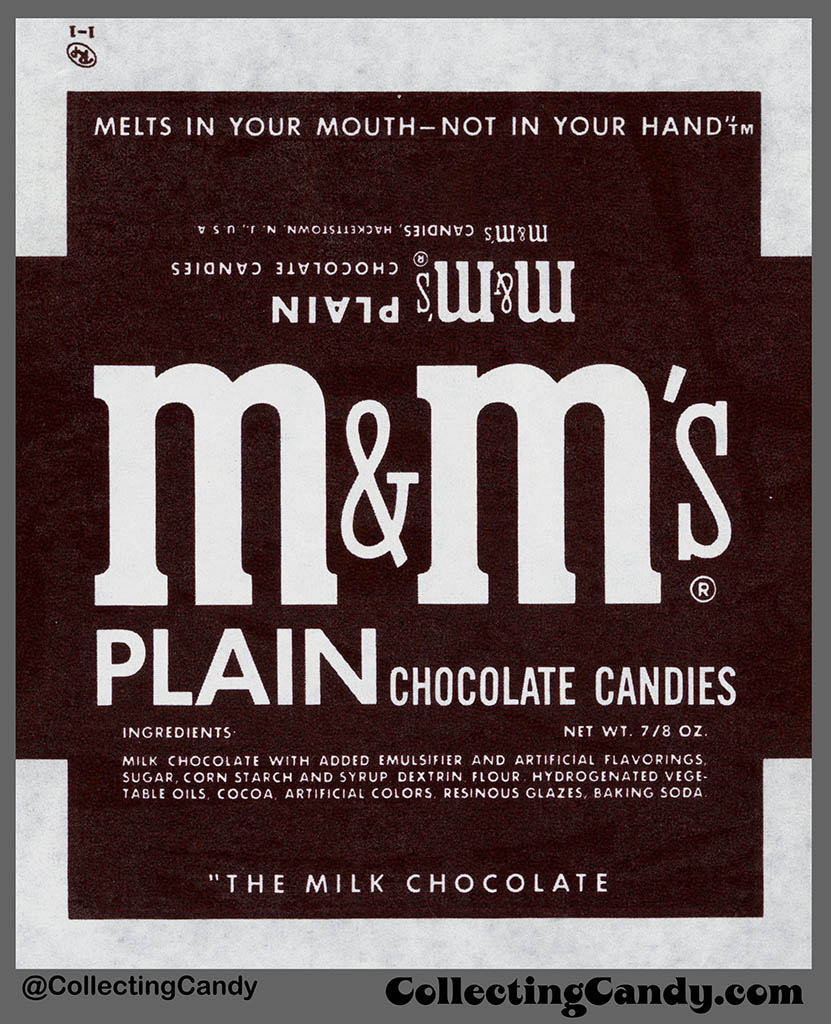 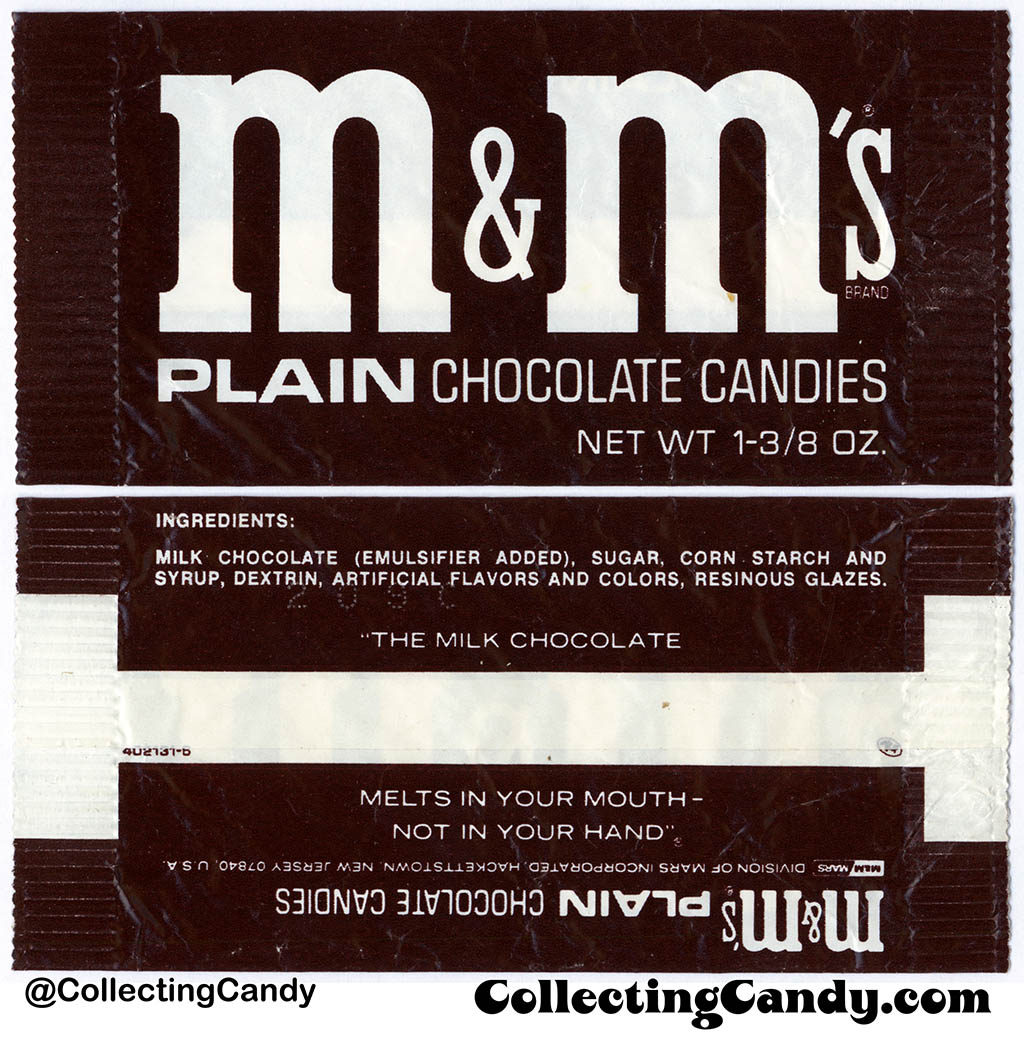 I had long thought that Mars continued on with this stark-yet-bold packaging design uninterrupted through the 1970’s and 1980’s before a serious change was ever considered, but after an amazing discovery last year, I’m no longer sure of that.  You see, early last year, I discovered a mid-1970’s M&M’s package that featured a mascot, and not only that, but a RED M&M’s mascot.  I never had an inkling that such a thing existed and when I discovered it, I was blown away: 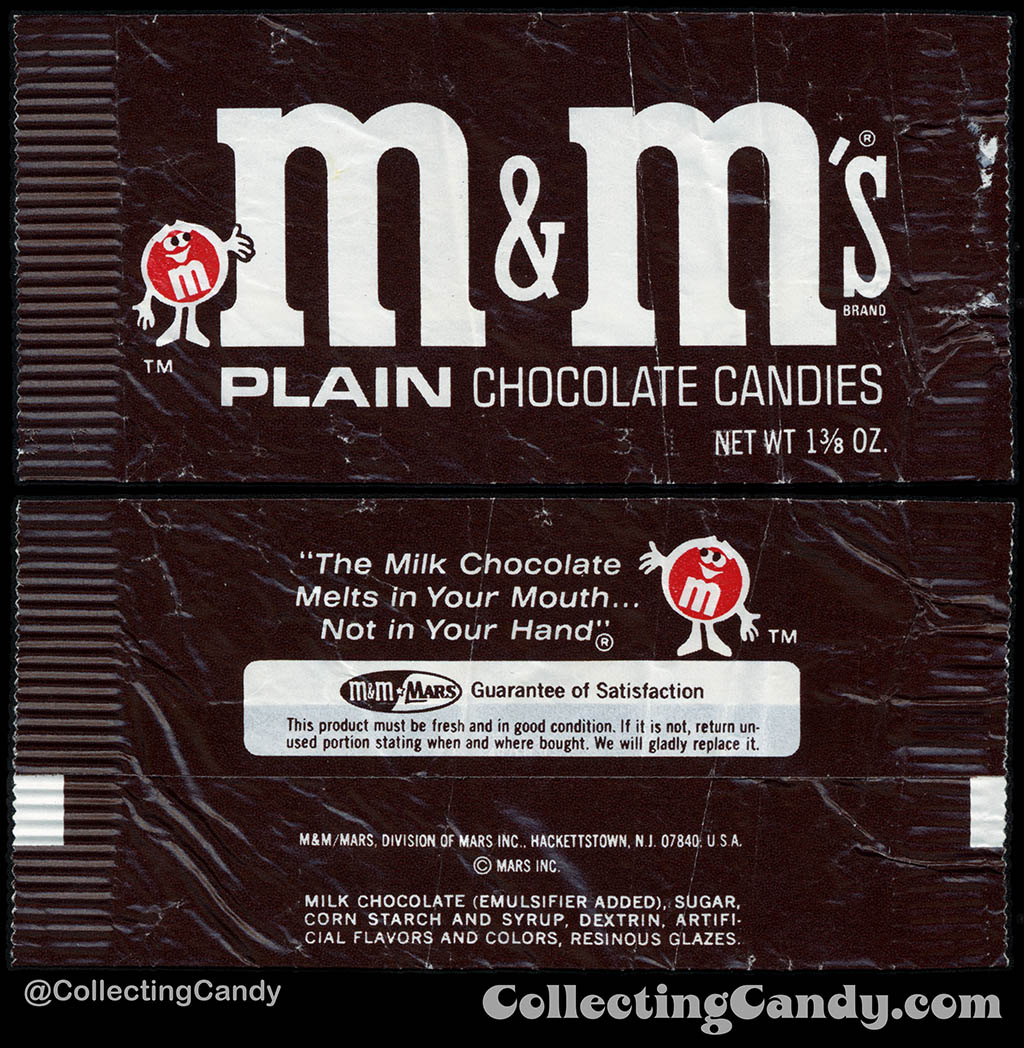 The existence of this on-pack-mascot M&M’s package profoundly changed my understanding of the branding history of M&M’s and offered up an intriguing possibility:  Contrary to my previously understood history on the matter, M&M’s toyed with the idea of putting mascots on packs decades-earlier than previously thought.  They did so here, with a pack featuring a red M&M, and I speculate that in the wake of the Russian red dye scare of the 1970’s, the red mascot was banished right along with the crimson candies.  So, rather than keeping on with mascots on their packaging, M&M’s returned to the iconic look of the past, as you can see on this wrapper from 1978: 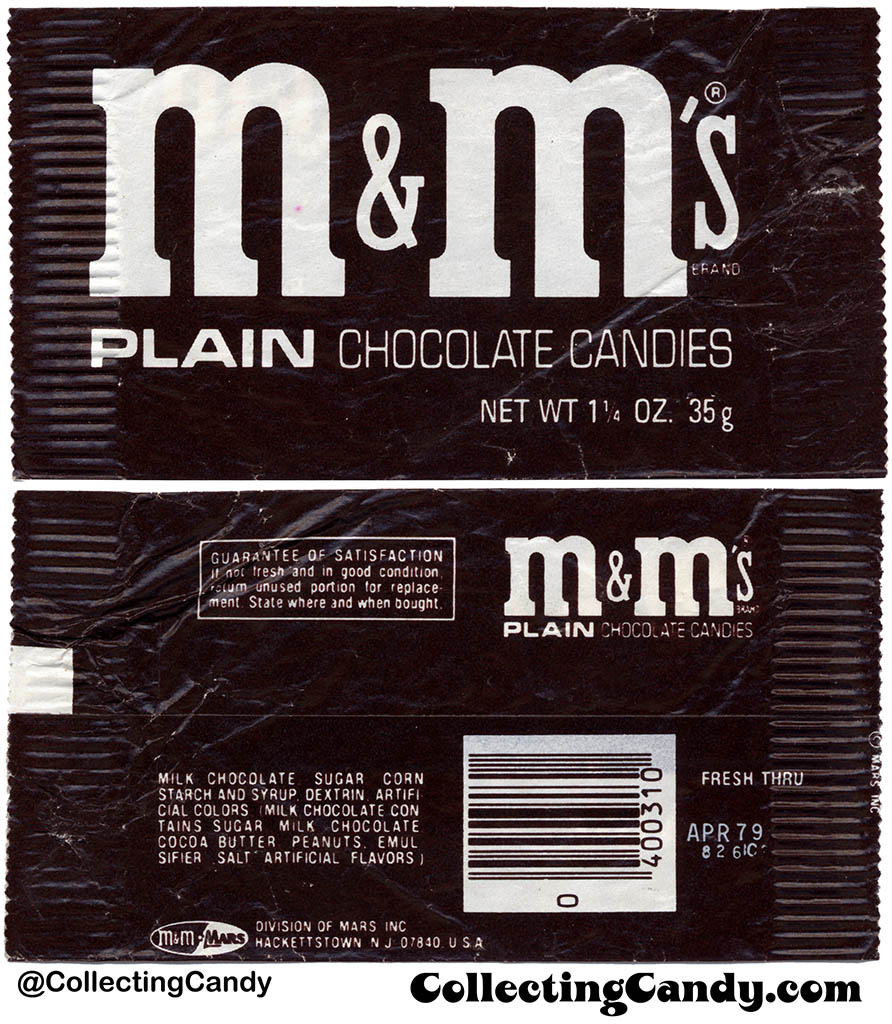 And while mascots were not being used on packages themselves, they were in liberal use on television commercials, ads and promotions like this one for an M&M’s wall clock from 1979: 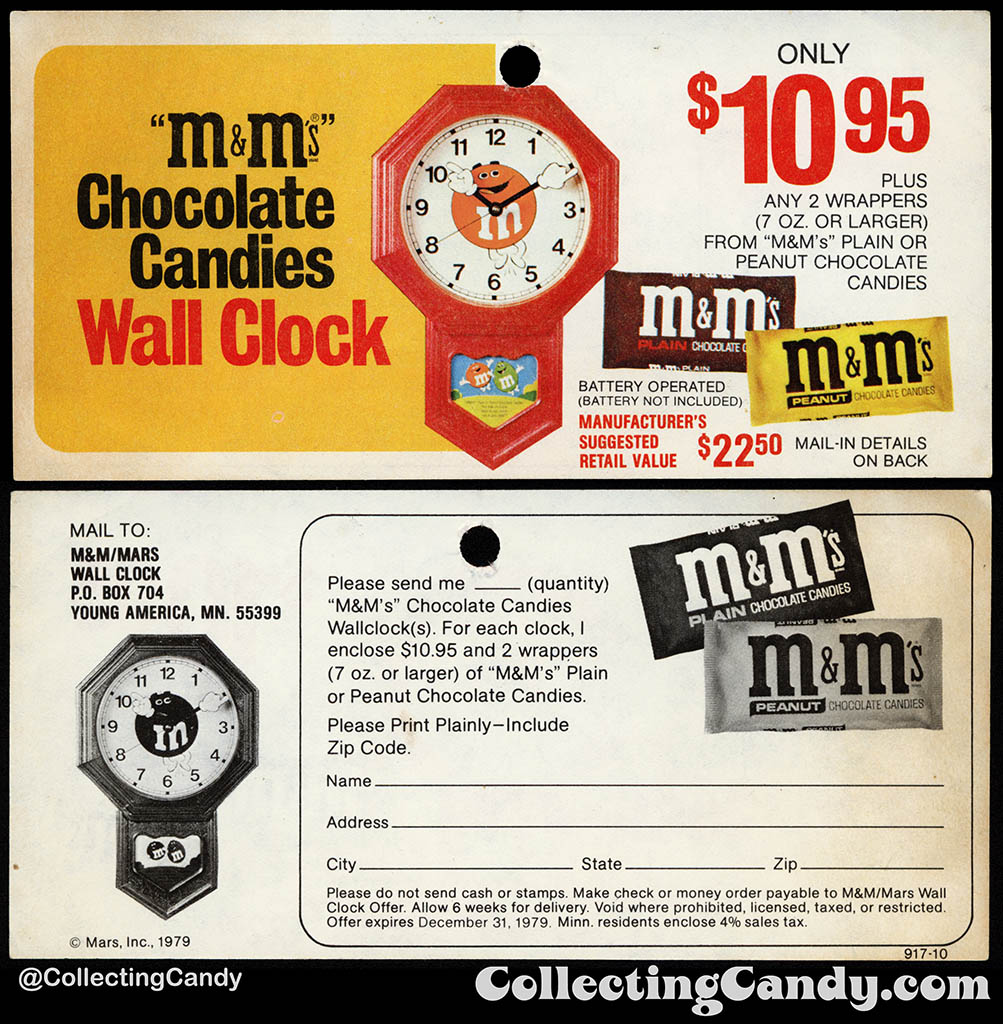 And while the regular use of mascots on packages was still many years away, the 1980’s would introduce a number of notable on-pack promotions, including an early example of Mars’ association with the Olympics, as seen on this 1983 M&M’s package:

Finally, in late 1985, Mars responded to fans and consumer desires by finally bringing red M&M’s back to the pack.  According to my research, the first packs to get red M&M’s were the newly launched Holiday line for the 1985 Christmas season, which makes sense, since they could finally do a red/green assortment: 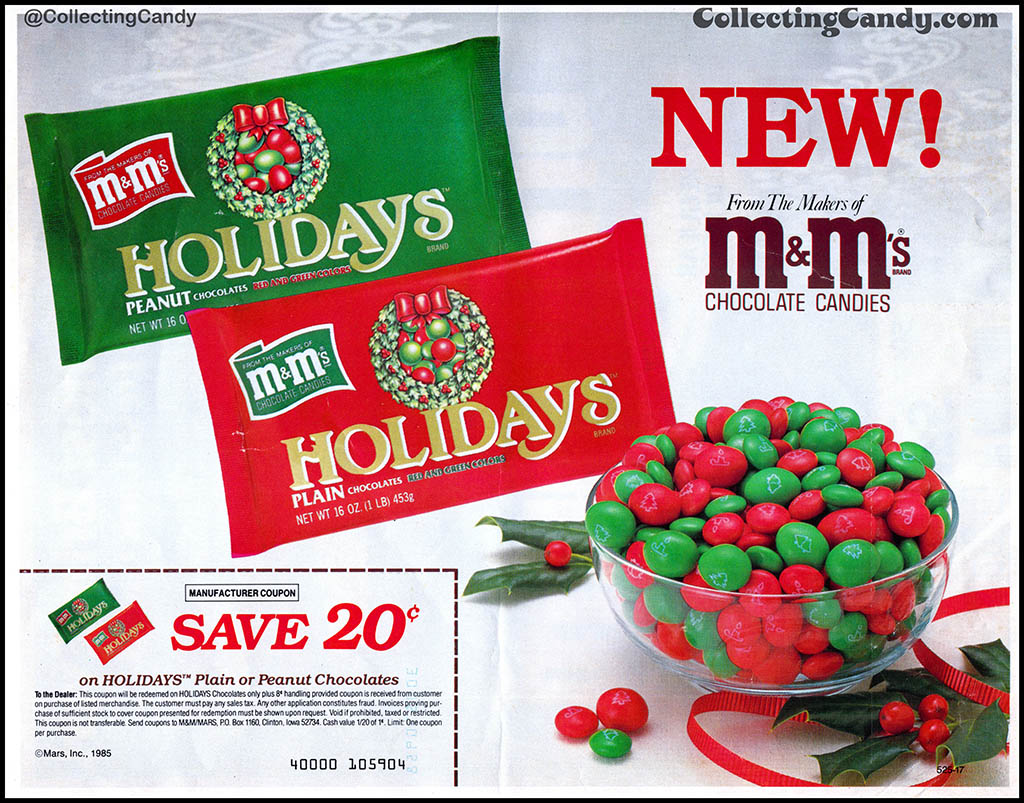 It wasn’t until the following year that red M&M’s were returned to the standard mix, but even then, the change didn’t take place immediately as you can see on this Summer circular advertisement:

But within months of that ad, red M&M’s had finally rejoined the standard assortment mix.  It was a change that was highlighted on this extra-large, pound-size bag: 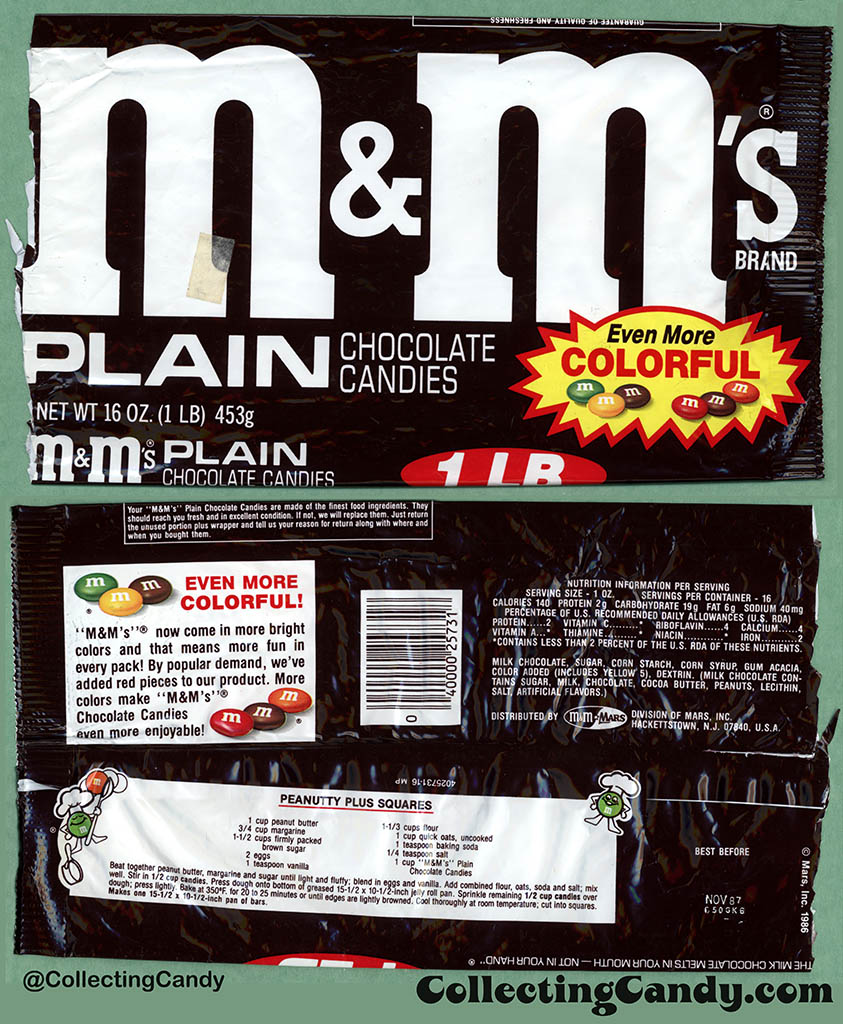 As described on the back of that historic package, “M&M’s now come in more bright colors and that means fun in every pack!  By popular demand, we’ve added red pieces to our product.  More colors make M&M’s Chocolate Candies even more enjoyable.”  That made it official.  And while M&M’s mascots would still not be standard on packs for another decade, the 1980’s would have them showing up occasionally on the large pound bags, as they did on the back of that very package. 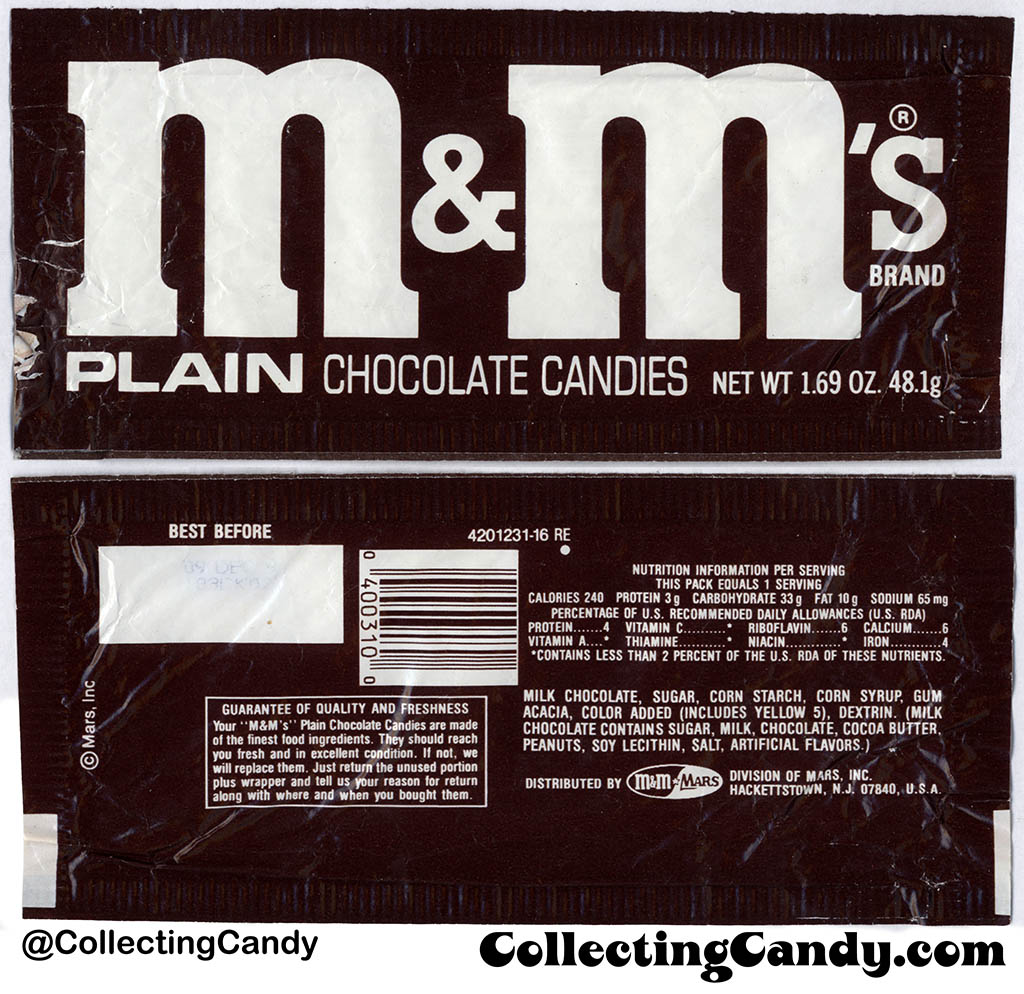 The following year however, Mars tweaked the design by moving the flavor description into a rounded box.  This change was likely due to the plans to launch the major M&M’s flavor expansions of Peanut Butter, Almond, and Mint which would come in the next two years.   Not only that, but by tying into the 1992 Olympics, Mars also played at putting mascots onto the standard-sized M&M’s packages as seen here: 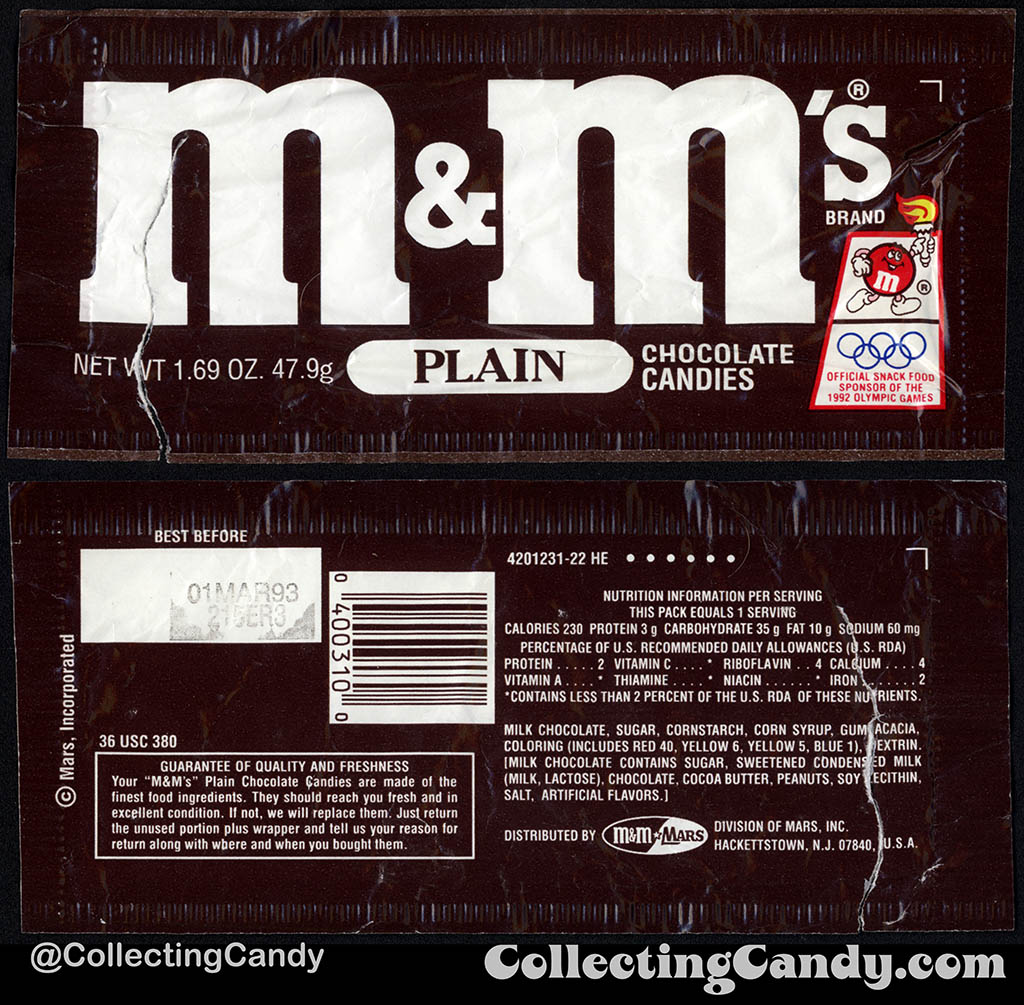 And while M&M’s mascots were beginning their meteoric rise to pop-culture phenomenon, they still weren’t important enough to be standard on the packs, as the following year, they were gone: 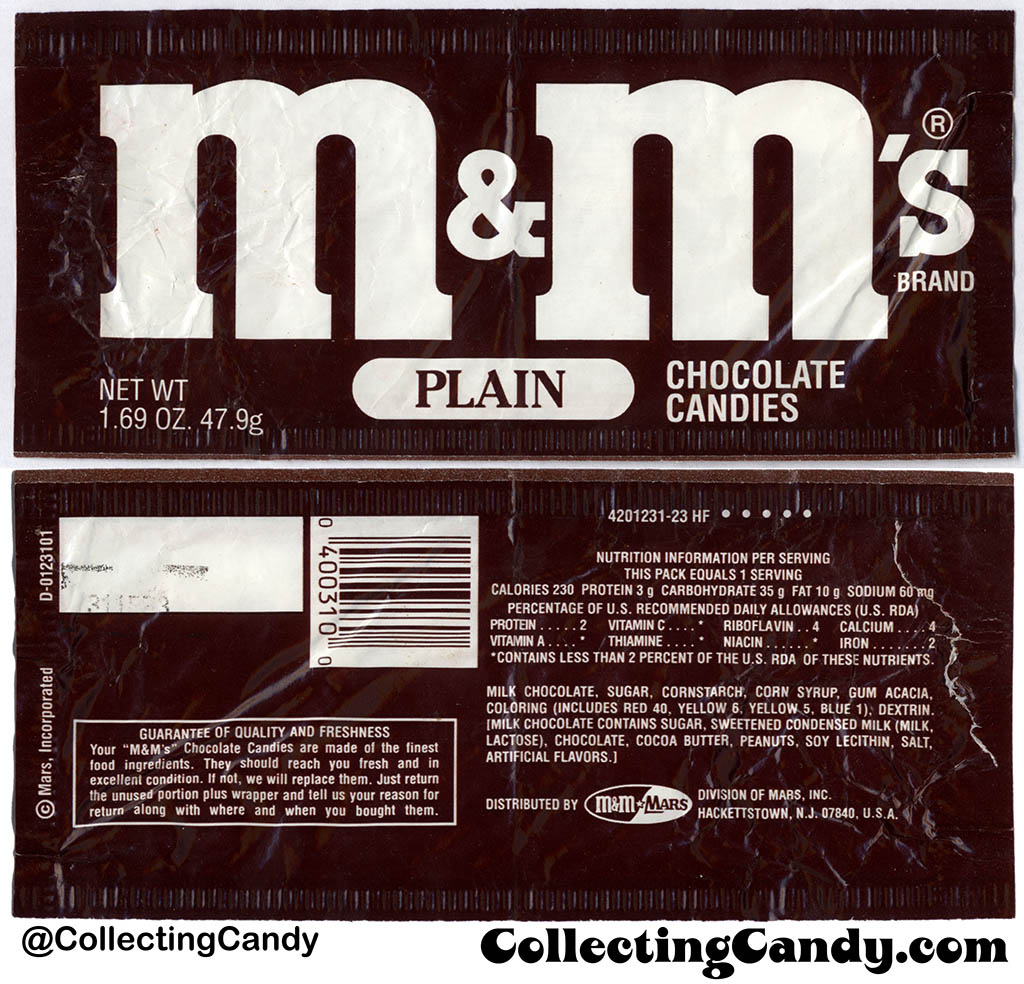 In spite of still not meriting appearances on every M&M’s pack, signs of the characters’ growing popularity could be found in promotions ongoing at the time, as well as consumer’s desire to show their love for them – seen on this pack promoting an M&M’s mascot wristwatch:

But where they weren’t standard on all packaging, the M&M’s mascots started showing up more and more on the larger and specialty packs.  They even managed to sneak onto the front of this extra large 17 oz bag in 1994: 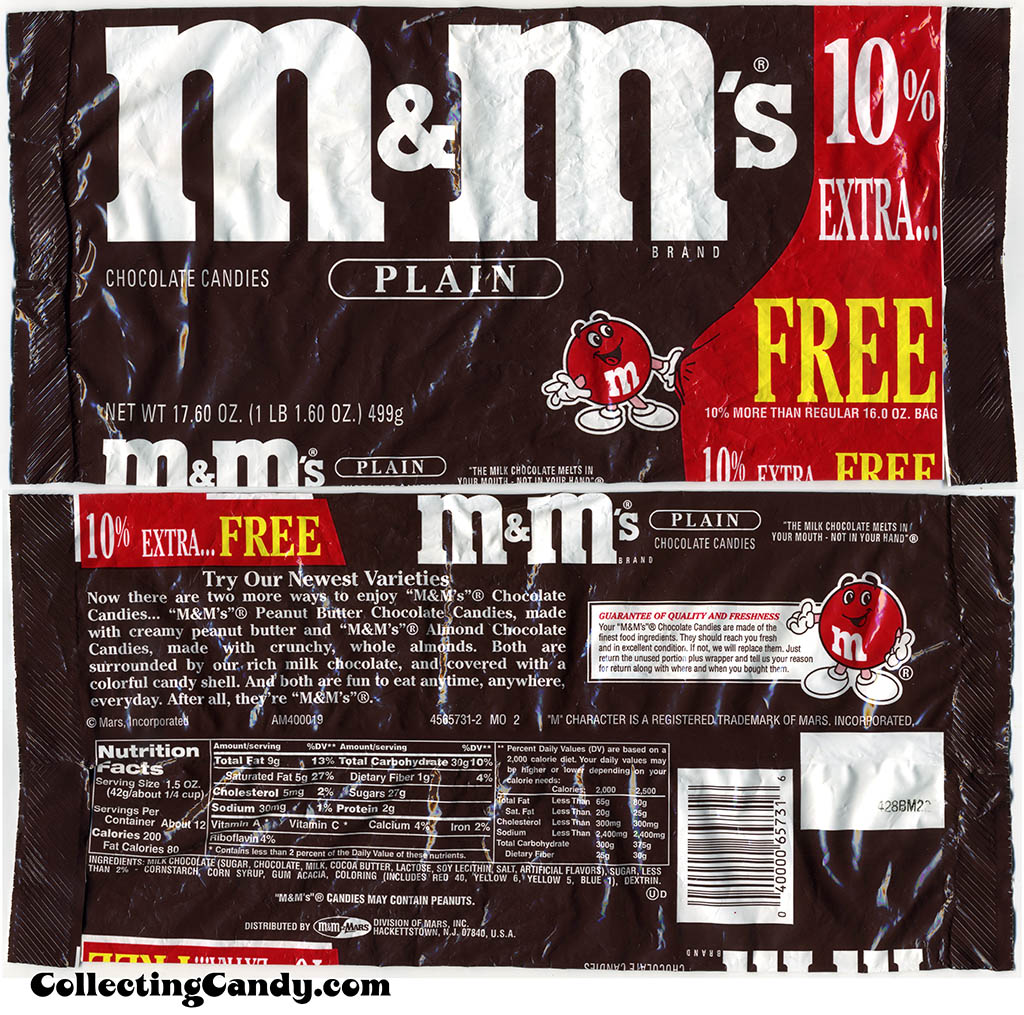 In 1995, the first major change for M&M’s packaging in many years occurred with the addition of standard product images.  This change can likely be attributed to modernizing the branding, but perhaps also to advances in printing technologies allowing for the visuals of the candies to be achieved on-pack: 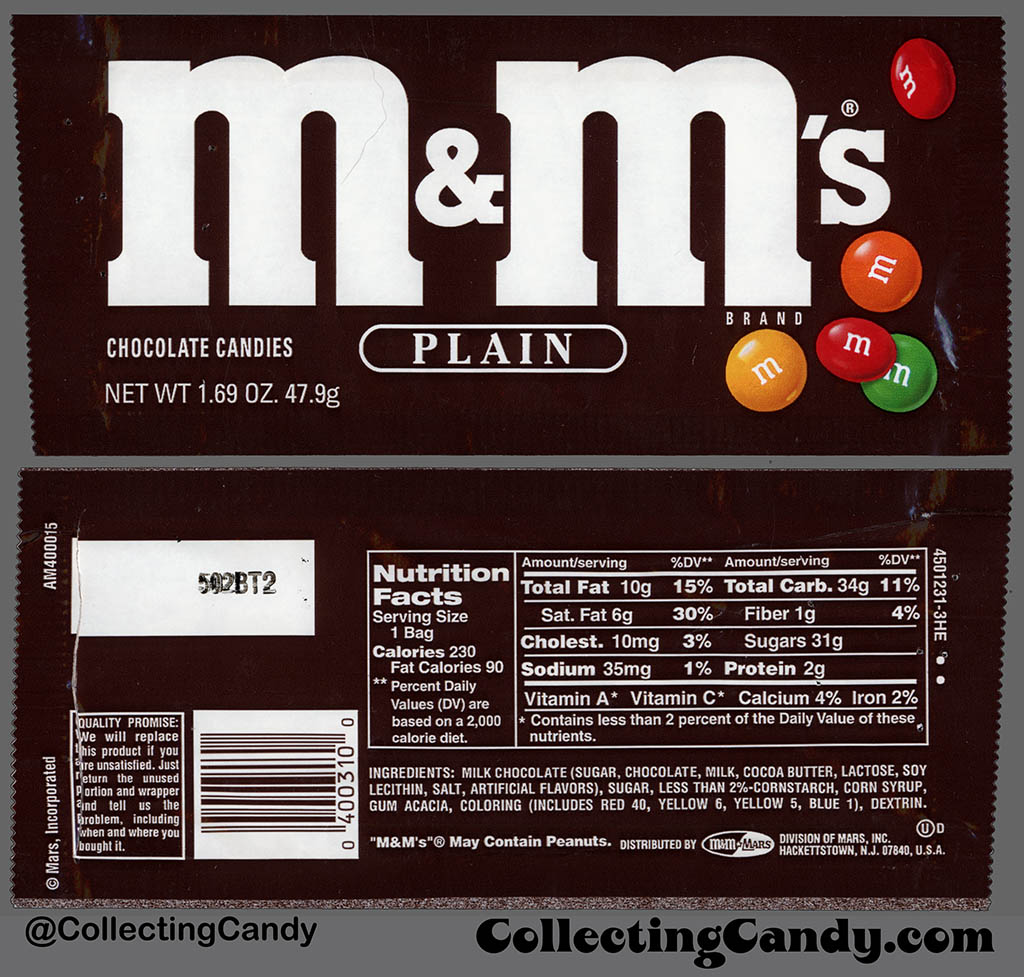 By 1995, red M&M’s had already been back nearly as long as they had been in exile a decade earlier, perhaps making their existence a bit passe.  So Mars decided to play with the color mix yet again in 1996 to make it even more colorful than it already was, introducing the very first BLUE M&M’s.

They would first launch the blue color packs in conjunction with a chance to win a “colorful Hawaii vacation”.   It’s worth noting that the packaging call-out didn’t specifically mention the color blue (though the graphic was blue itself), but rather the idea that there was simply a “new color inside”.  This makes me wonder if the decision as to which new color would be added was one made late in the game.  Suffice it to say, blue was the new color and soon after the initial launch pack, they were added to the standard package graphics: 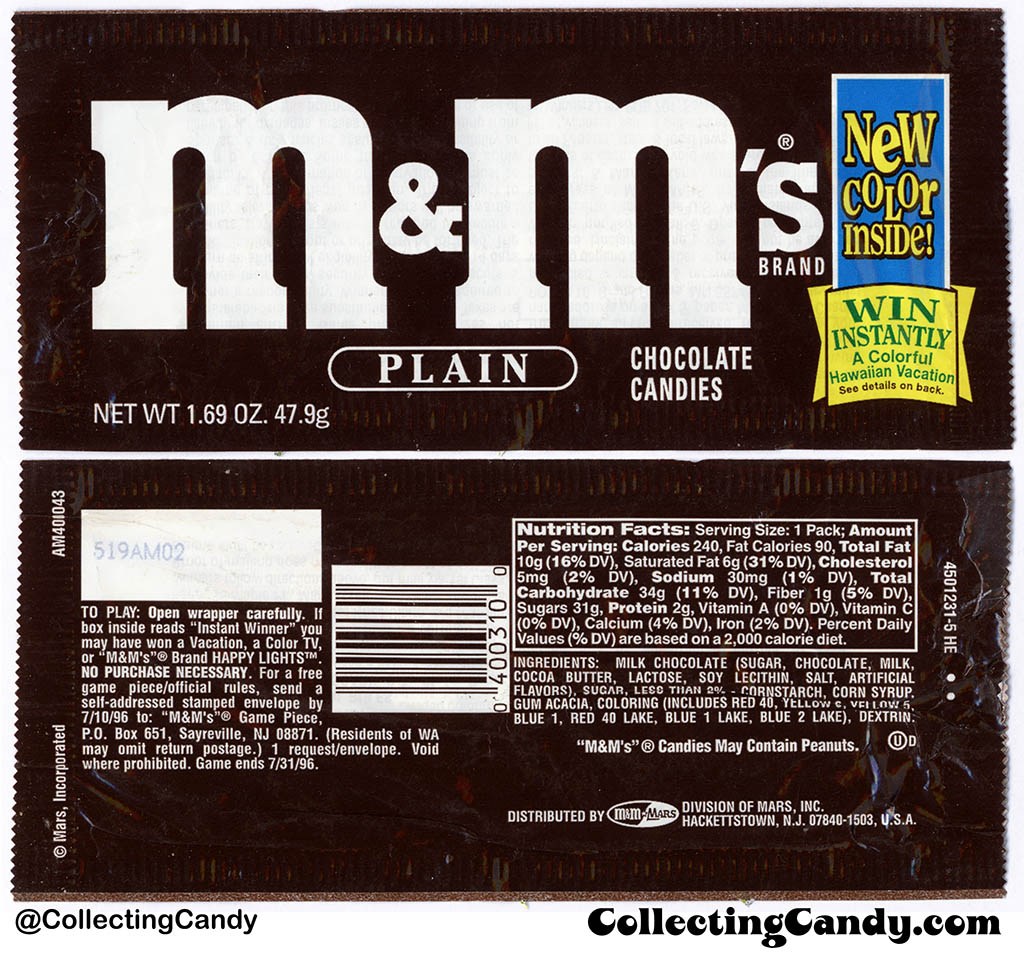 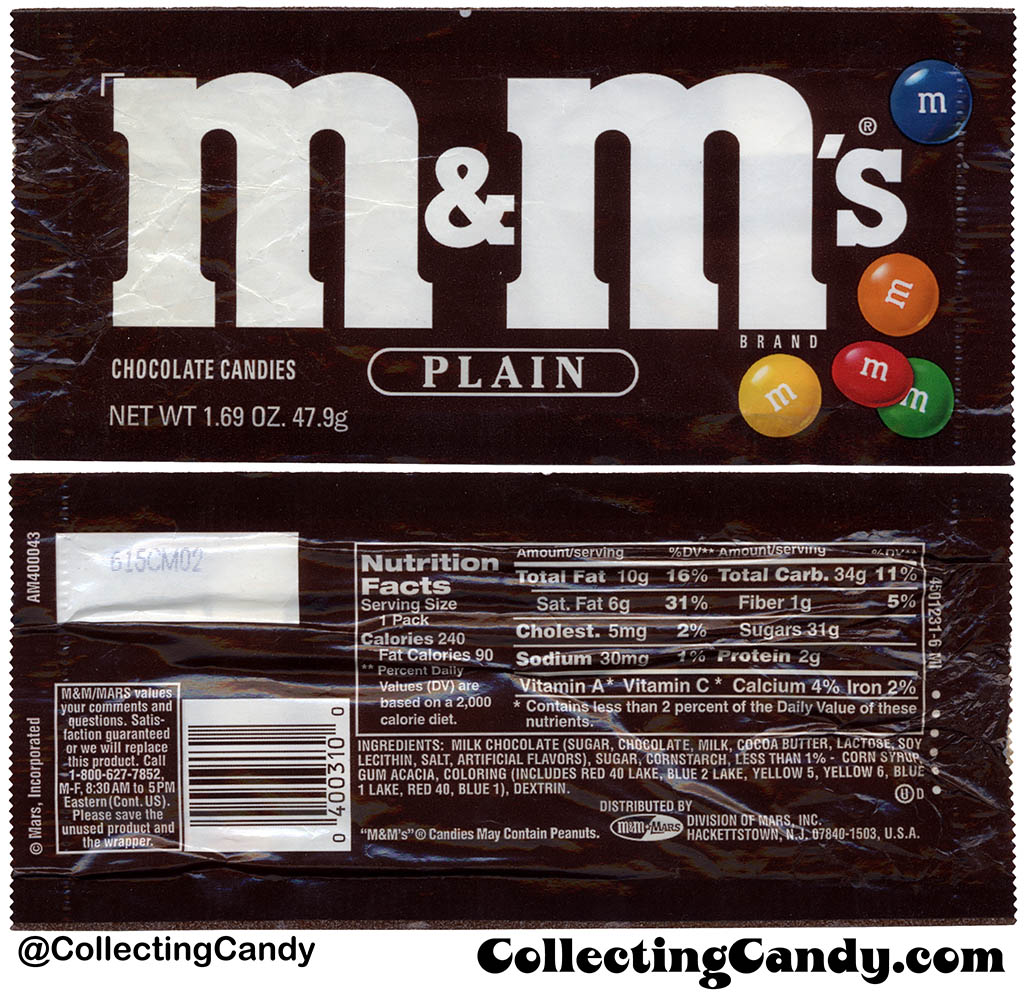 And while that was certainly a dramatic change, it was in 1997 that the modern more three-dimensionally-rendered form of M&M’s mascots would make their debut on M&M’s packs, as seen on this “Find the Imposter M&M” wrapper from that year: 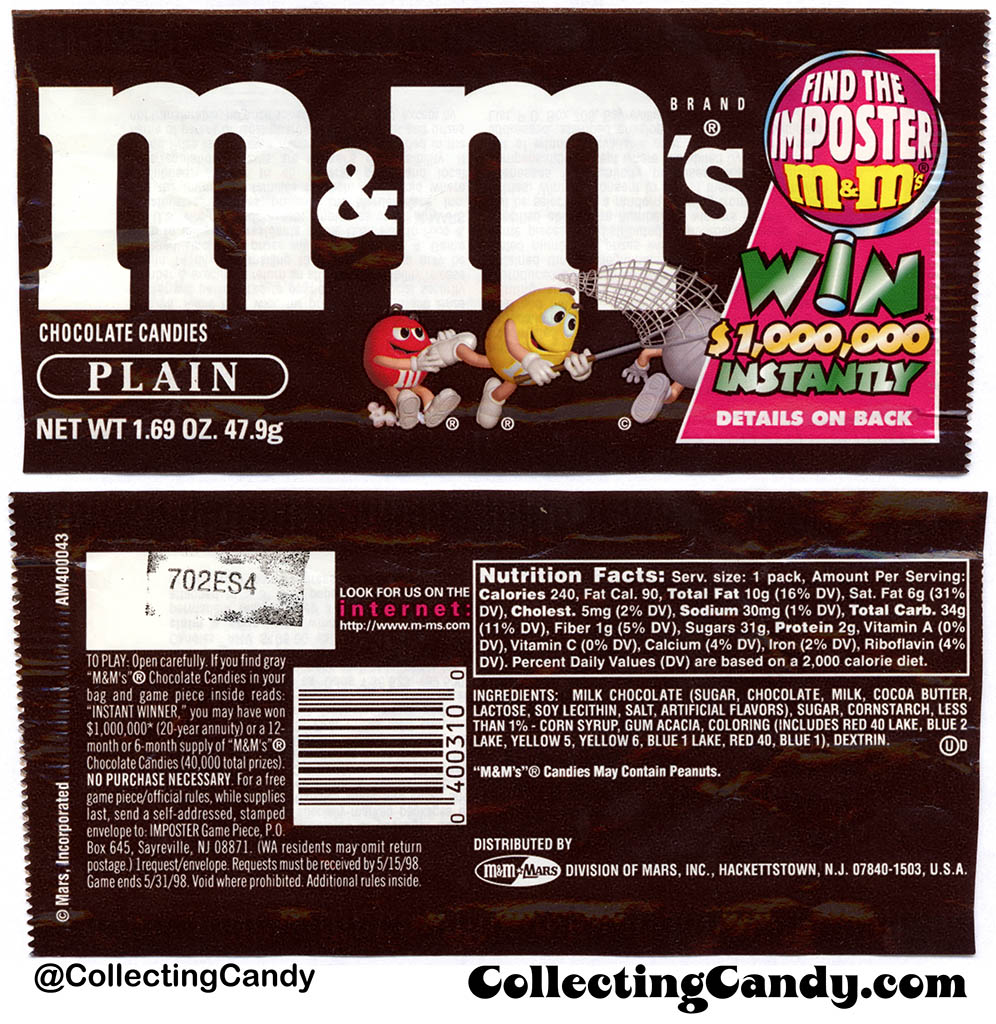 It’s worth mentioning that at this point in their development, the M&M’s mascots had reached superstar status.  Coinciding with their inclusion on all M&M’s packaging, the mascots were beginning to be licensed out, eventually leading to M&M’s clothing, kitchenware, sporting goods, and just about anything you could print the characters upon. 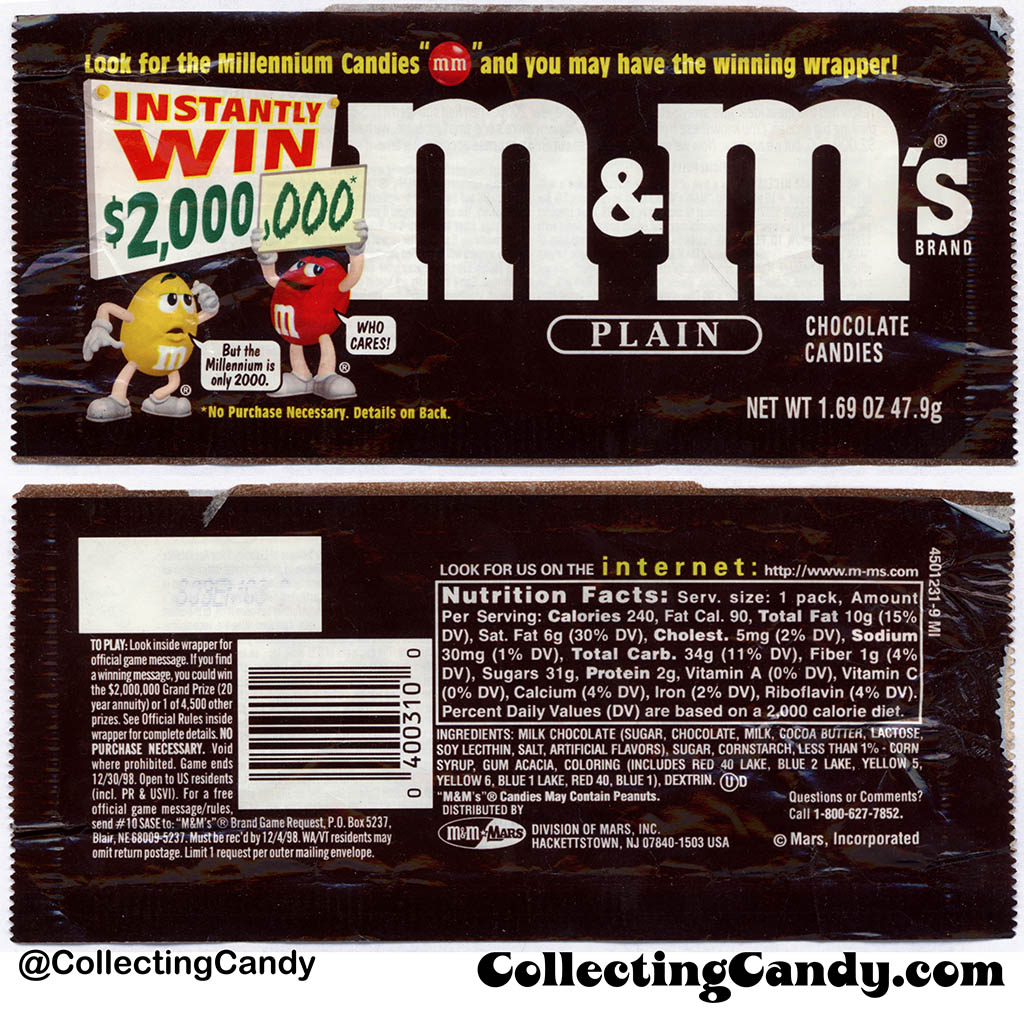 Red and Yellow were constant companions through these promotions, already featuring their now-iconic personality traits.  Also, around this time is when Mars opted to change the name of “M&M’s Plain” to “Milk Chocolate M&M’s”.  Seems they felt that “plain” could be interpreted as something less than amazing. 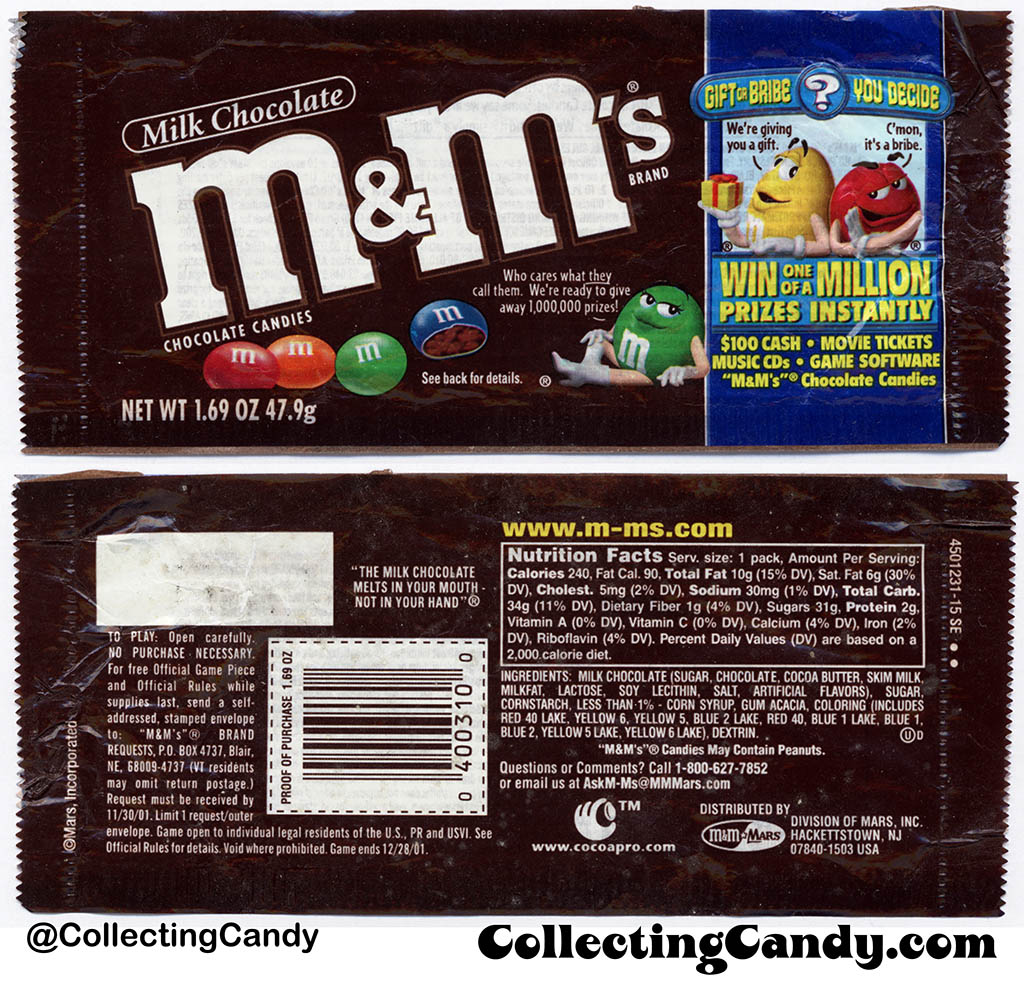 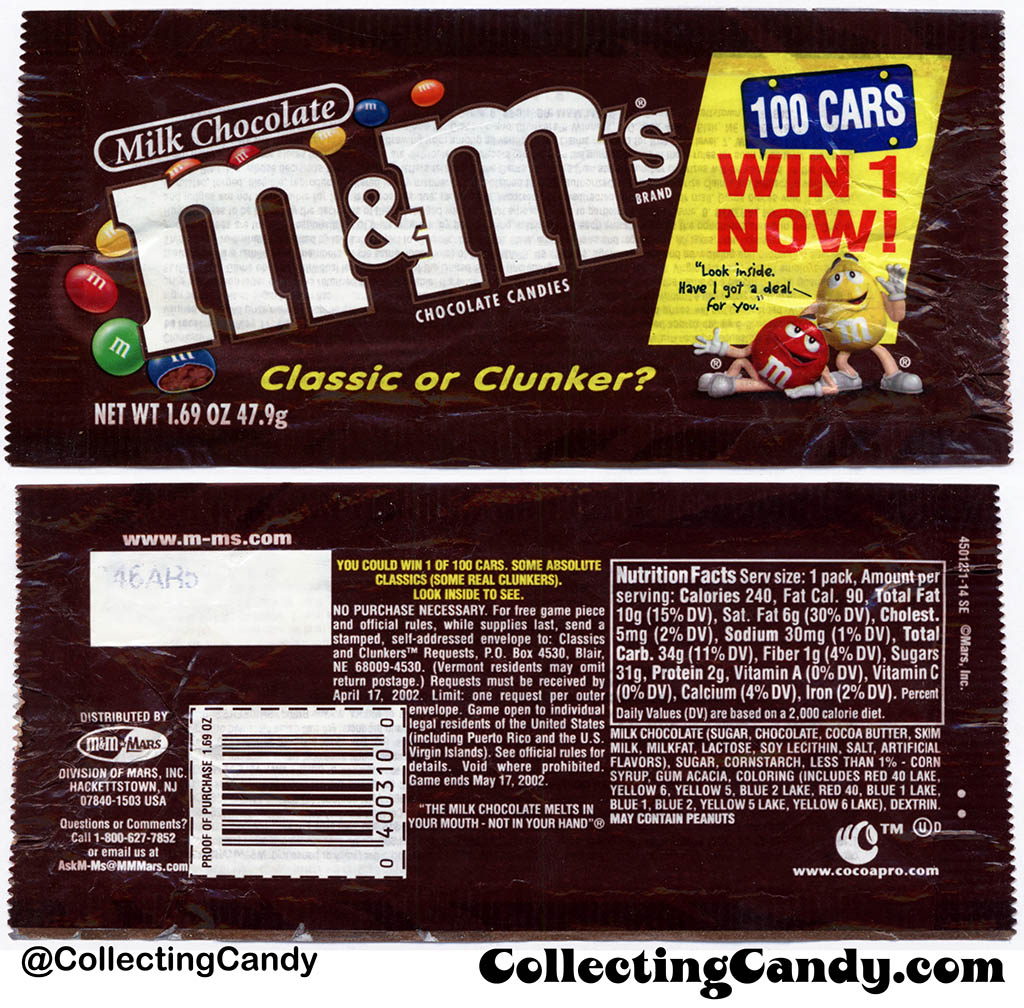 2003 would see the temporary introduction of purple M&M’s, the result of a “global vote” for a new M&M’s color: 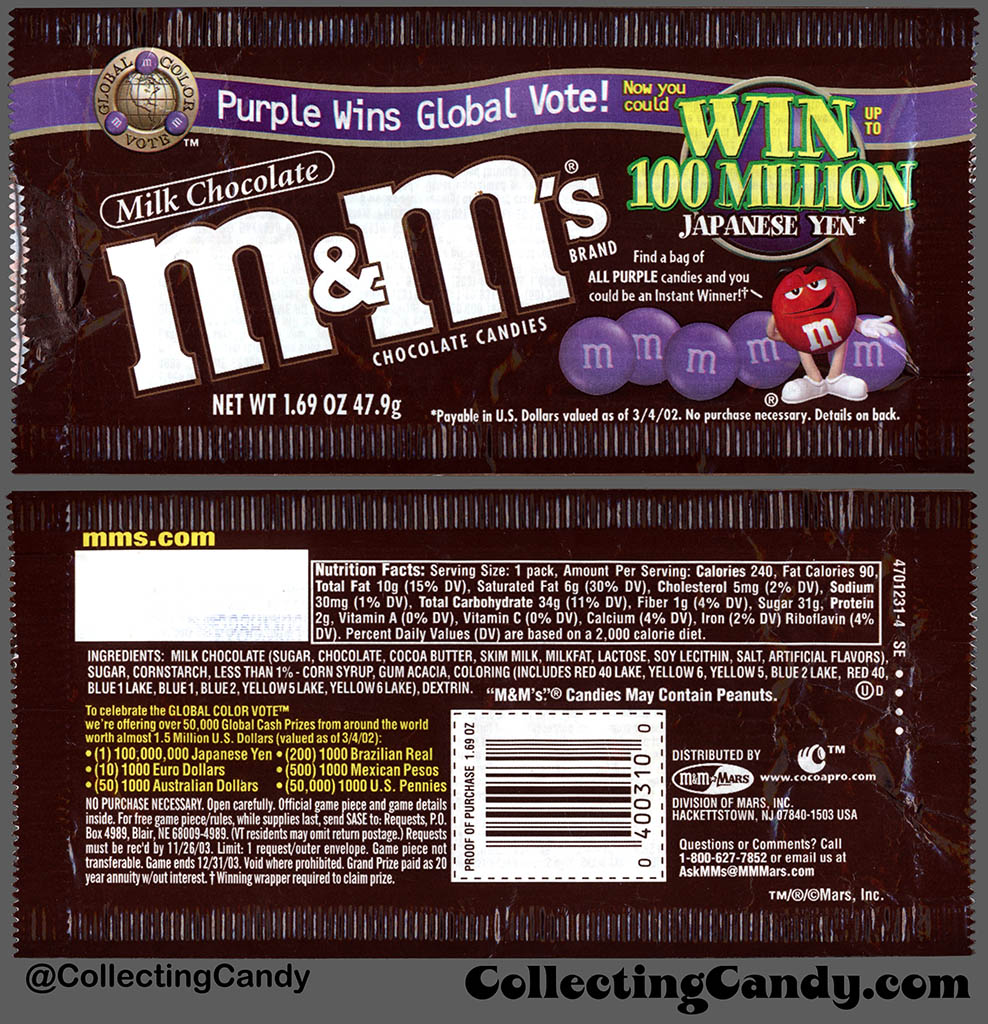 That same year, a tie-in with the Special Olympics would feature golden M&M’s: 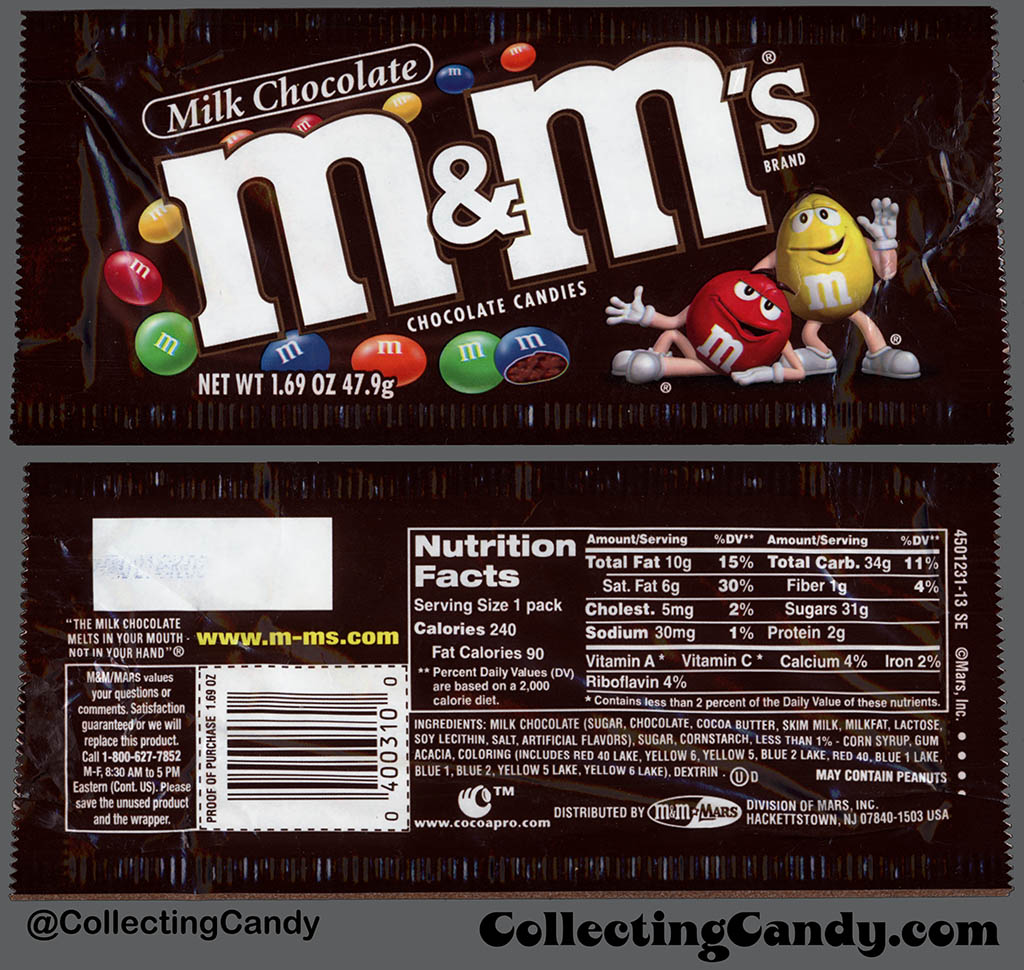 Red and Yellow’s partnership on Milk Chocolate M&M’s packs would continue for a little while longer, but by the mid-2000’s, they went their separate ways, with each mostly taking solitary control of their respective flavor packs. 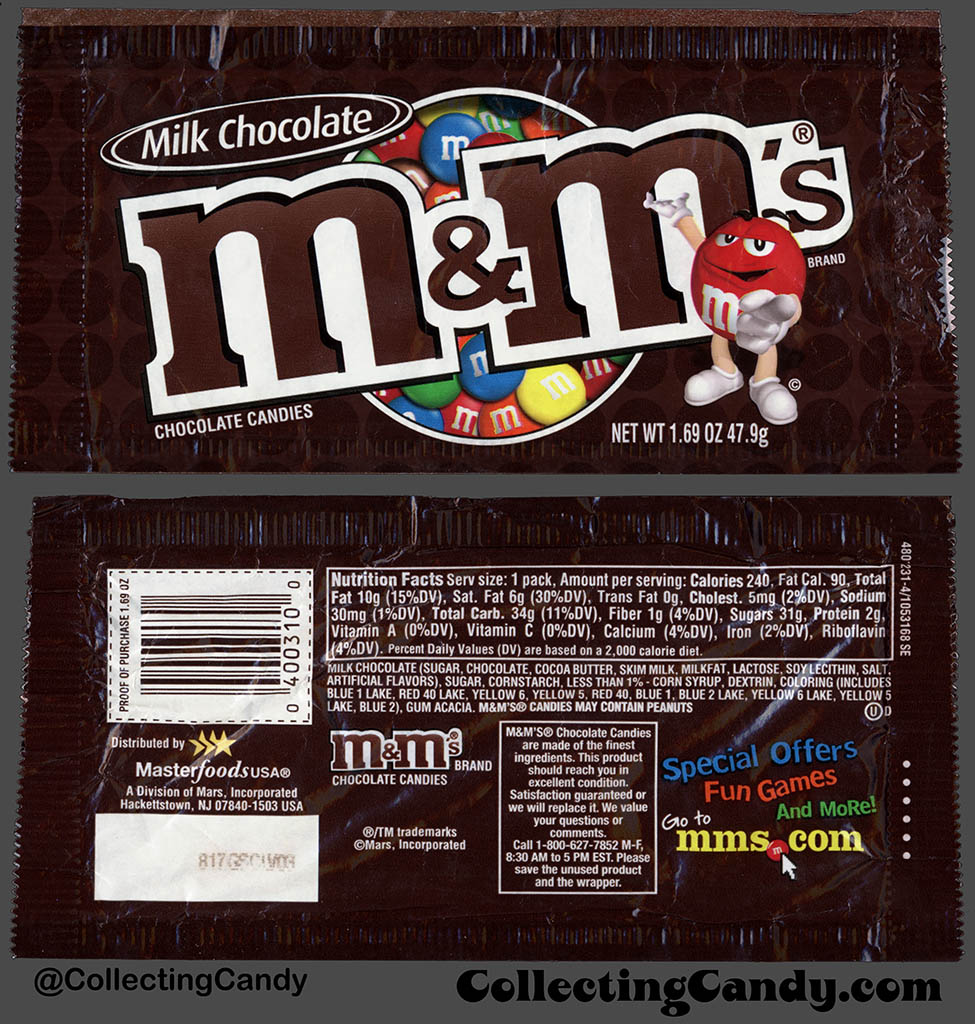 Which brings us to the current M&M’s pack design, first introduced in 2010 when Mars jumped to the head of the industry by introducing their front-of-pack calorie indications.  A design still utilized today: 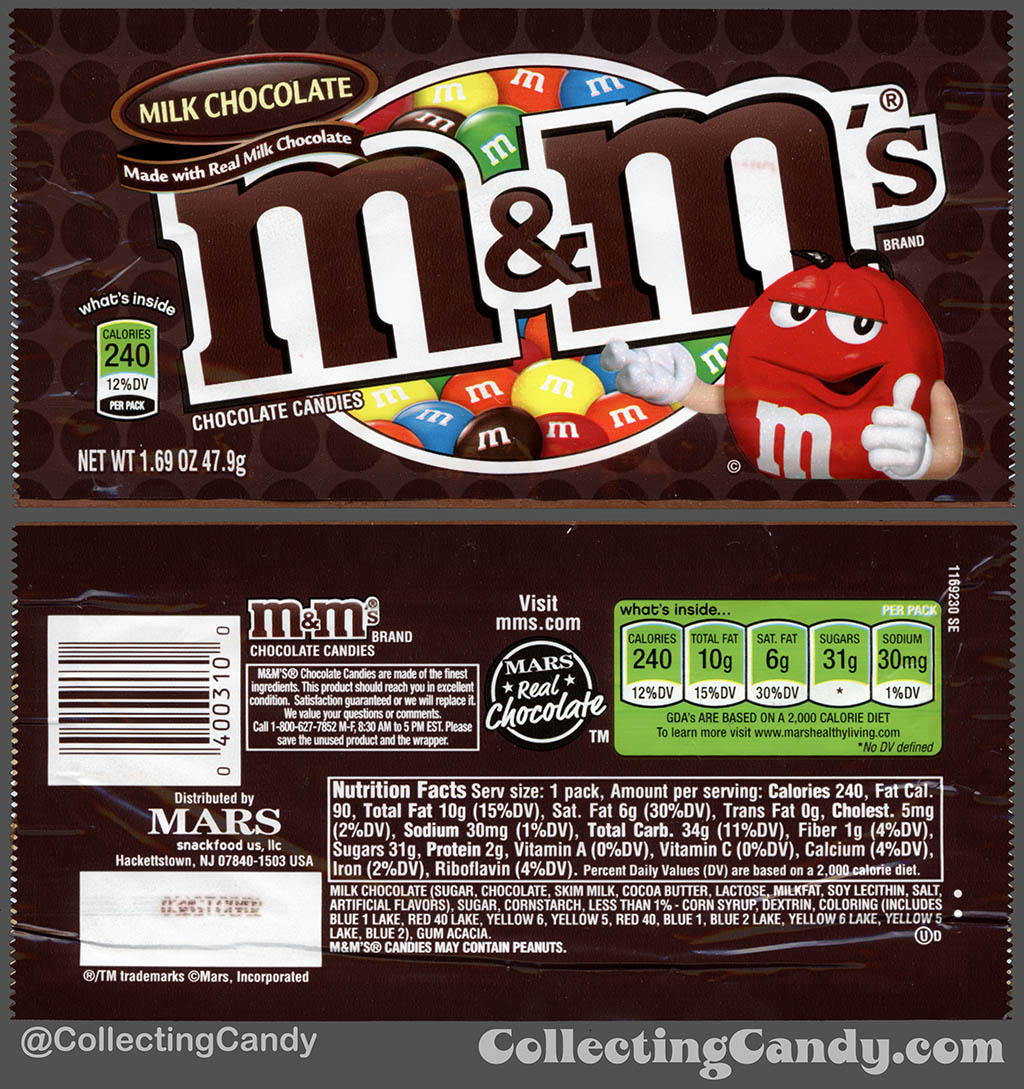 These days, Red is the first mascot through the door where the M&M’s characters are concerned, and even with a strong cast of personalities around him, he’s still the go-to guy when Mars wants a sure thing to do something like launch a new M&M’s chocolate bar: 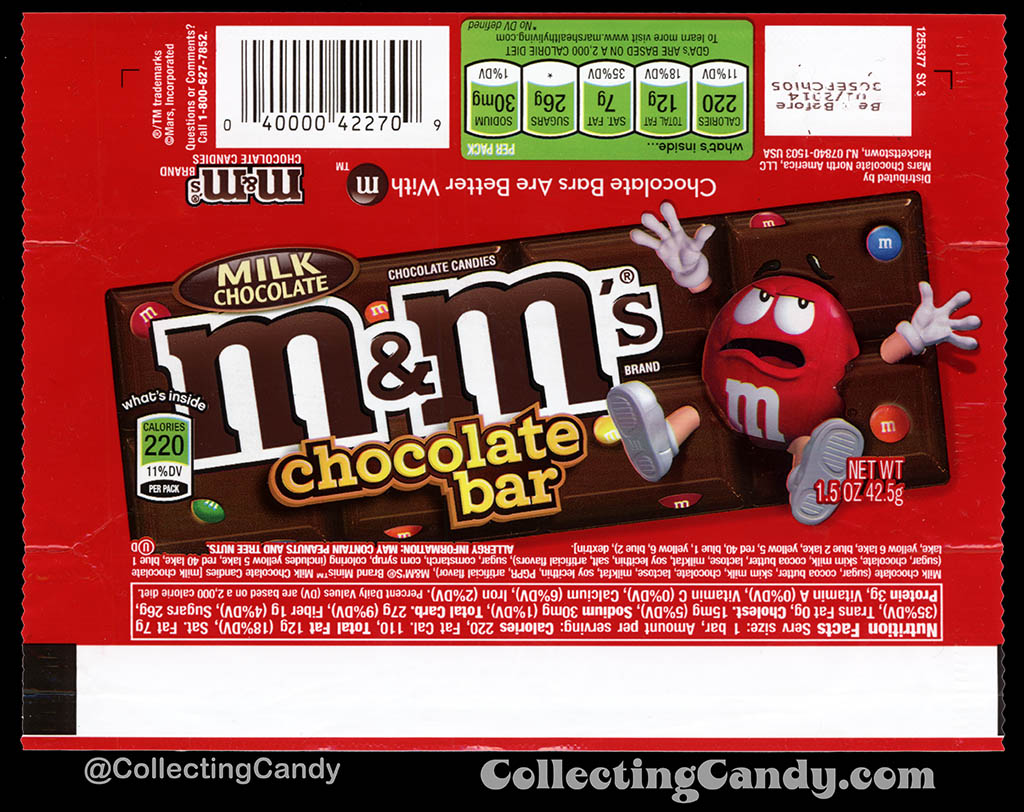 Somewhat appropriately, Red was featured in a propoganda-like poster for an M&M’s vote promotion a few years ago: 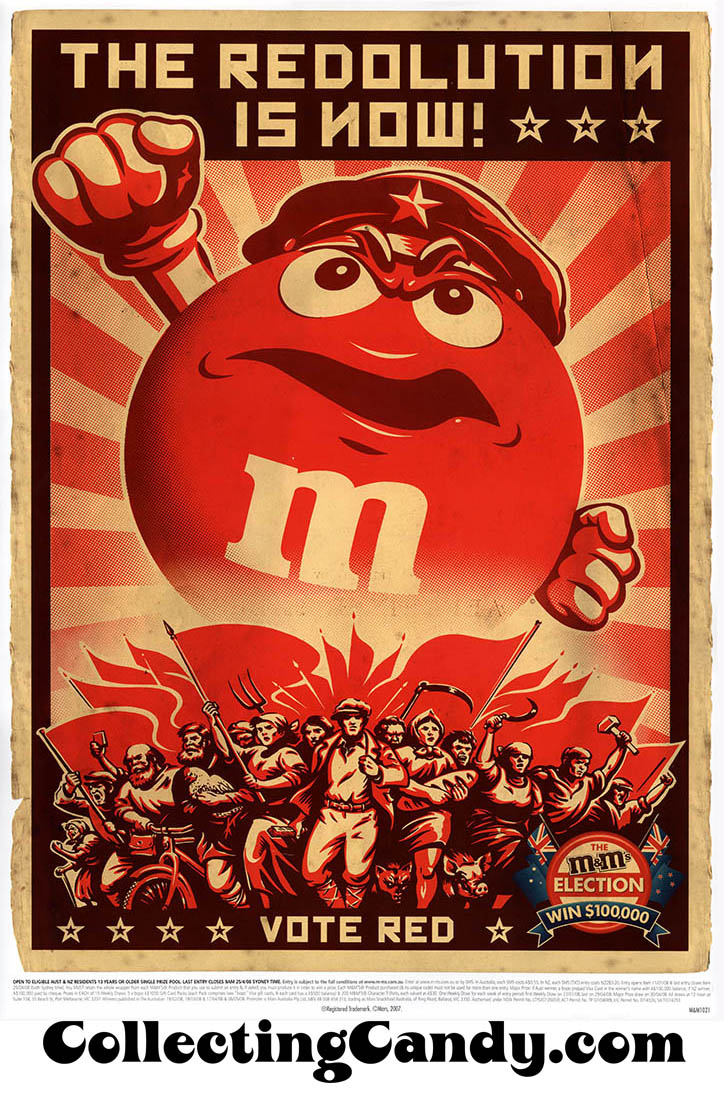 So while Red has certainly recovered from his mid-70’s exile and even benefited from his modern day “Redolution”, I can’t help but wonder what might have been had he not been pulled from assortments (and stripped from M&M’s packages) back then… we can only speculate.  But I do wonder if that Russian “Red Scare” really did set back the M&M’s mascots twenty years.  What do you think? 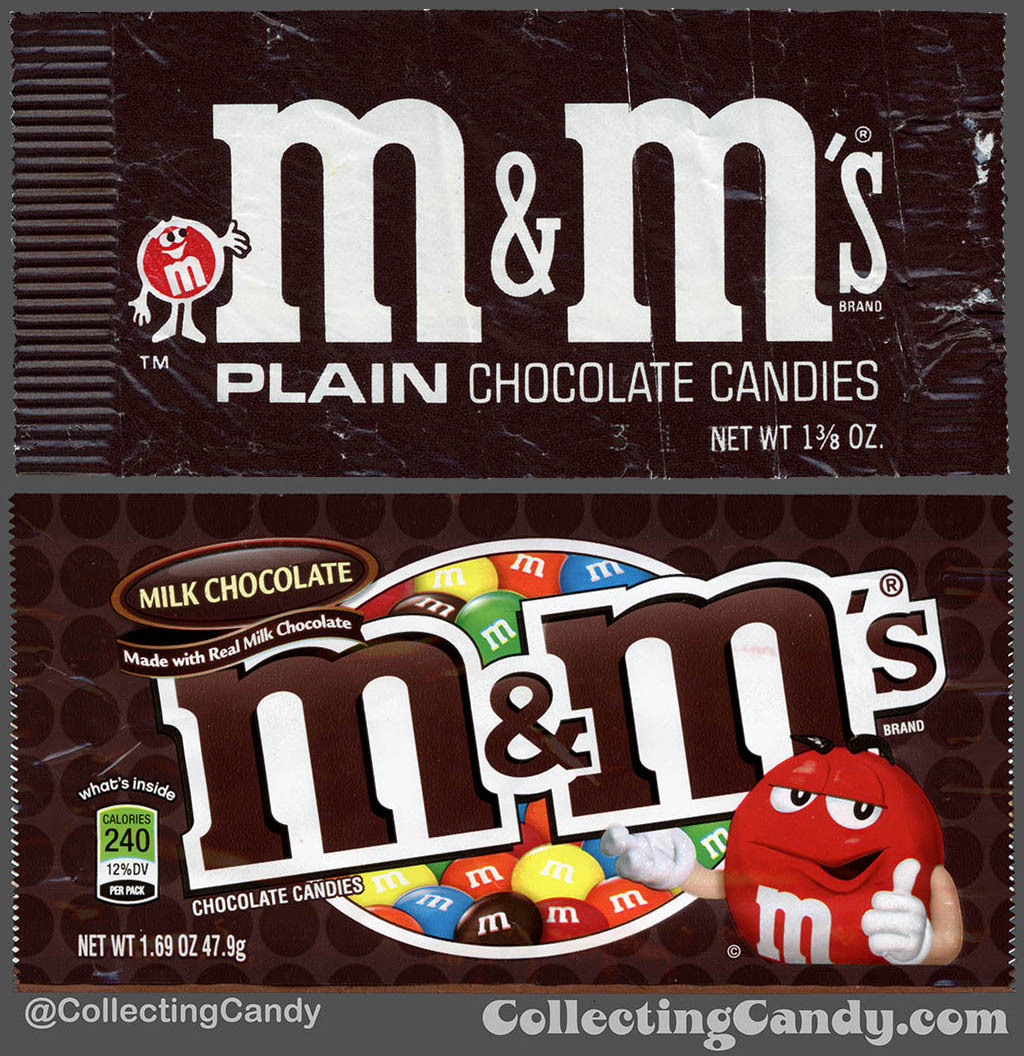 I would like to point out that today’s post kicks off a week-long series of posts celebrating CollectingCandy.com’s 5th Anniversary arriving on February 6th, 2017.  Each day I hope to share an extra-special or insightful post with things you can’t see anywhere else but here.

For now, that’s everything I’ve got to share on this exciting and previously unknown part of M&M’s history.  See you next time!

A New York City based writer, editor and sometimes actor. After spending much of the 1990′s in the comic book business helping tell the stories of Marvel Comics’ X-Men as series editor, he has since split his time between developing his own entertainment properties while still consulting and working on others. Having been described as “the Indiana Jones of lost and forgotten candy”, Jason is one of the country’s premier candy collectors and historians with his discoveries appearing in countless blogs, magazines, newspaper articles, and books. Always happy to share his knowledge and unique perspectives on this colorful part of our popular culture, Jason has consulted with New York’s Museum of Food and Drink and has also been a featured guest on Food Network’s Heavyweights, France’s M6 Capital, and New York’s TheActionRoom.com. My Google Profile+
View all posts by Jason Liebig →
This entry was posted in 1960's, 1970's, 1980's, 1990's, Chocolate, M&M's, Mars and tagged candy collecting, candy collection, candy collector, candy wrapper collection, candy wrapper collector, collectible, collecting candy, confectionery, confections, M&M, M&M's, Mars, mascot, packaging, packaging design, Red, sweets, vintage candy wrappers, wrapper. Bookmark the permalink.