The Rest Of the Best Of 2016’s New Halloween Candy!

Each year, candy manufacturers roll out fresh seasonal offerings and packaging for the Halloween holiday and during this year’s Countdown I’ve managed to cover a number of awesome examples.  But with our 2016 Countdown To Halloween coming to a close, I wanted to praise a few awesome new pieces that I didn’t have a chance to cover already.  So make the jump to check out the rest of the best of 2016’s newest Halloween candy!

Today is October 31st and that means it’s Halloween!  Hooray!  And while it is exciting, it is also bittersweet to finally be here at that Halloween holiday, because as the season hits its apex, that means it is also coming to an end.

As a candy historian and collector, the Halloween season presents as one of the most fun and most active, with groovy new seasonal releases peppering the shelves along with returning favorites.  I selected five of my personal fave pieces from the many new offerings this year to showcase for today’s post.  These being from the awesome new releases that I haven’t previously covered during this month’s Halloween Countdown coverage already.   So let’s get to them.

One of the most striking Halloween pieces I’ve ever seen in this or any year, and one that I didn’t expect was Tootsie’s Spooky Edition Junior Mints – I was blown away when I encountered them on store shelves: 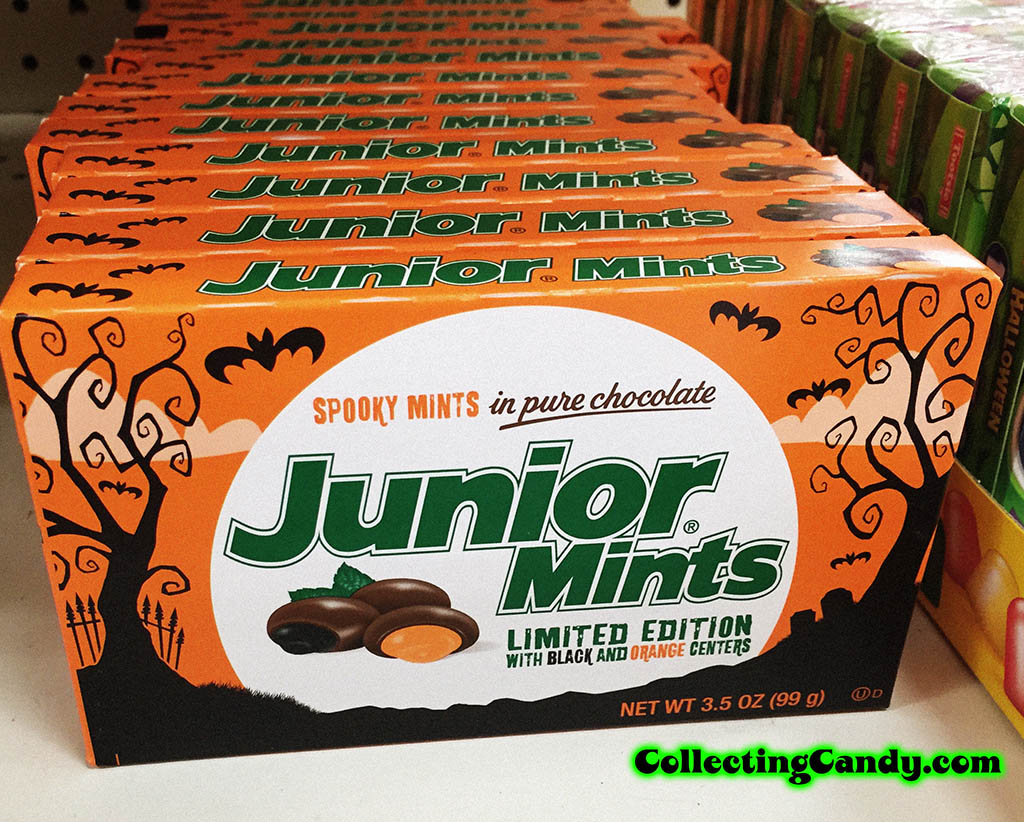 The packaging for these limited edition Halloween Junior Mints is bold, classic, and a bit retro – and it hits all of those notes so perfectly.  I think I’d have to vote for this one as “Best in Season” above all others, or very close to it.

Interestingly, if you put some of the actual candies in a bowl, you’d never know that they were different, as only the color of the centers was changed.

Next up in our look at the best of 2016 comes from Nestle.   These were a product I knew about months ahead of time since they were previewed to the candy trade.  But as soon as I saw that first preview, I knew that these would land on my “Best of” list because of how cool they were; here are the new Butterfinger Peanut Butter Cup Skulls! 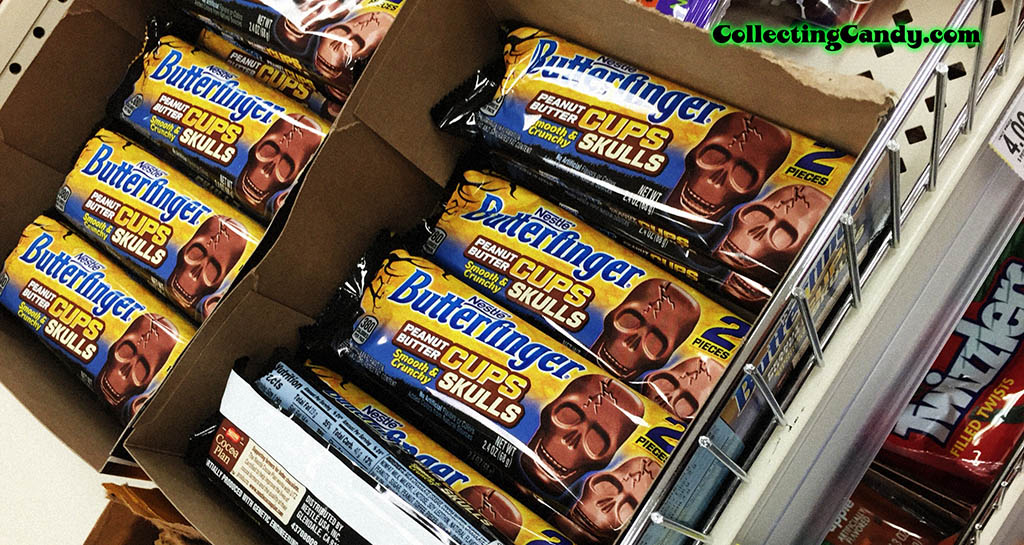 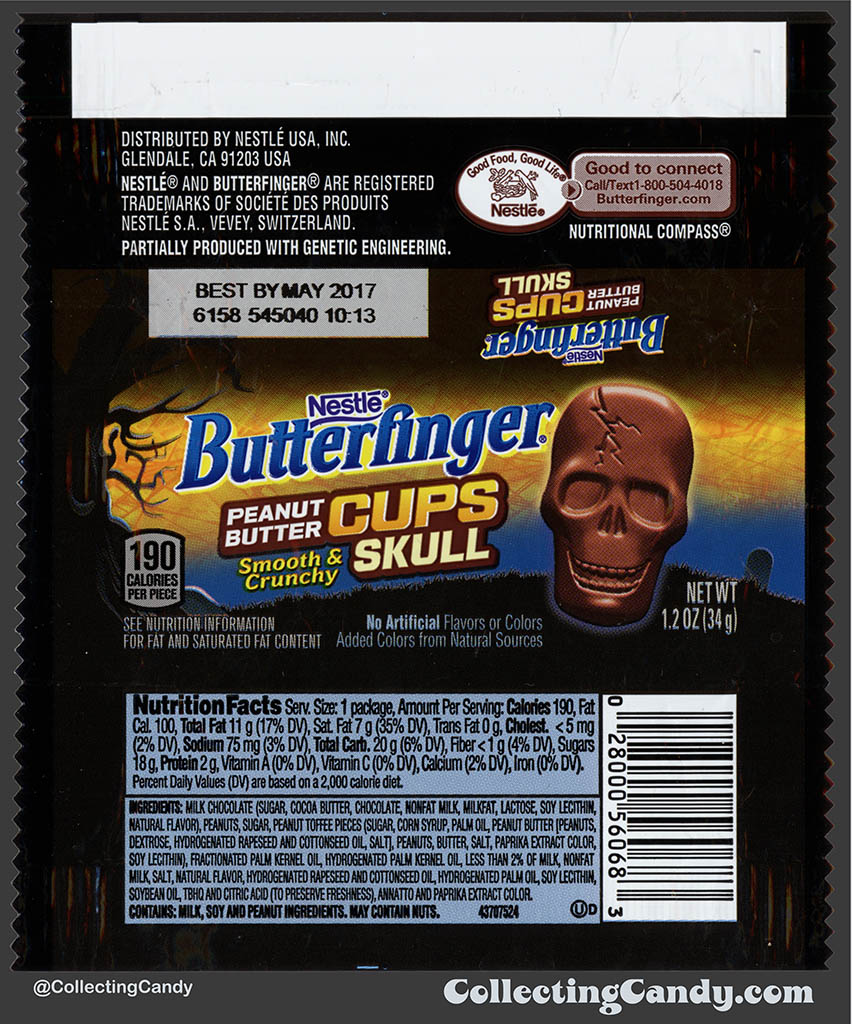 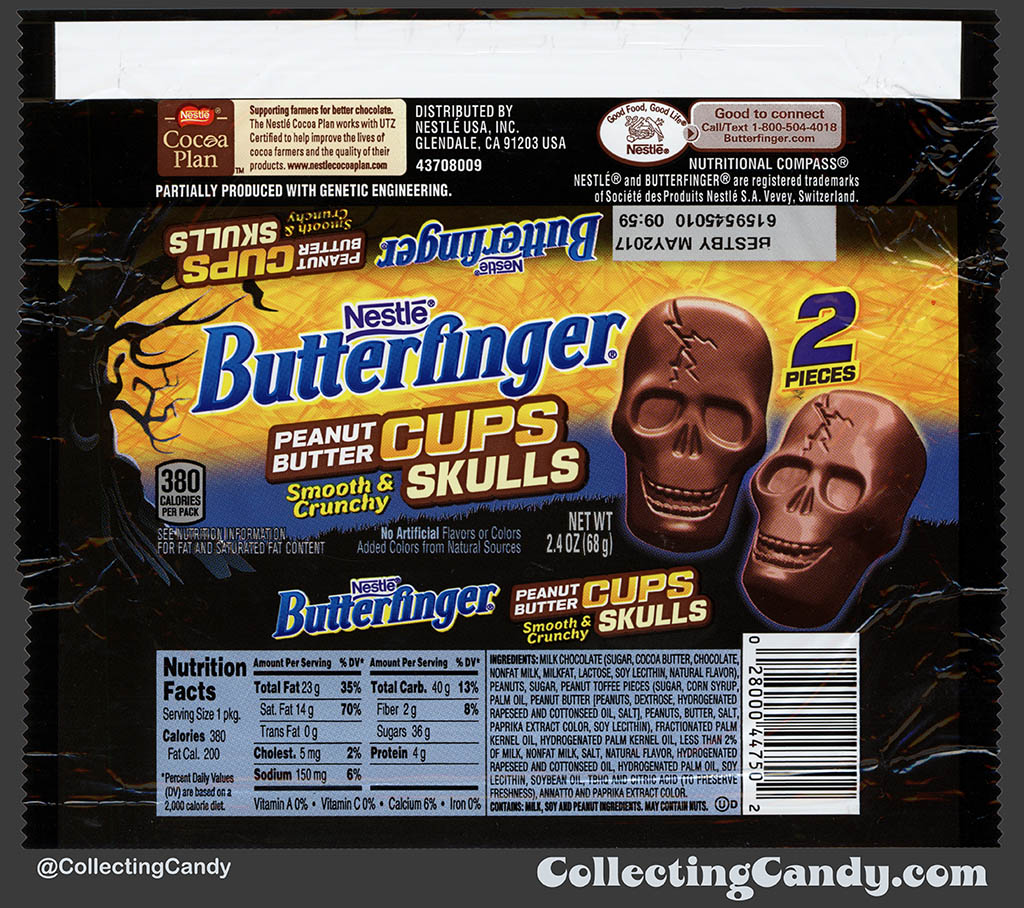 Based on their Butterfinger Peanut Butter Cups, a product still only a couple of years old itself, these represent a re-prioritizing for Butterfinger’s seasonal strategy.  In recent years, they had utilized their standard Butterfinger offering in a chocolate Halloween Pumpkin-form, as you can see here: 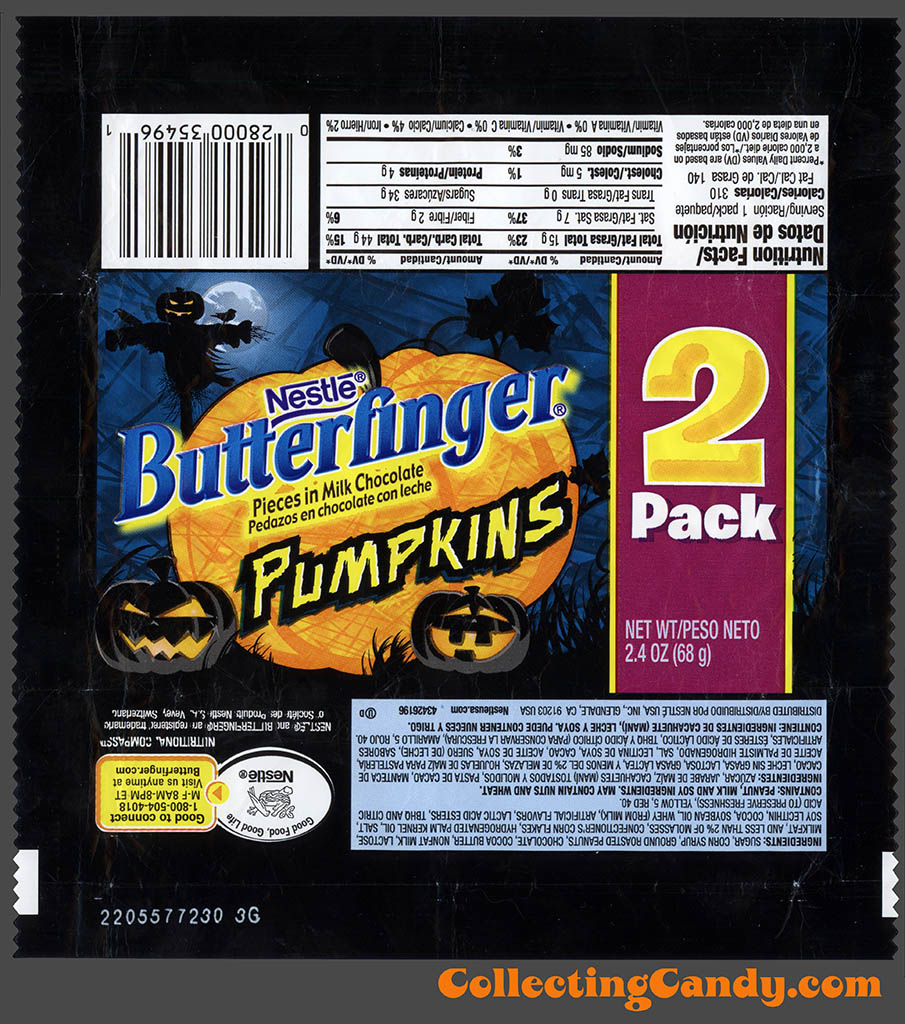 Another new release that I was delighted to discover this year was for Halloween DOTS!  In previous years, DOTS had a trio of Halloween offerings in a variety of flavors but they changed it up for 2016 with this more standard assortment in an appealing and colorful themed box: 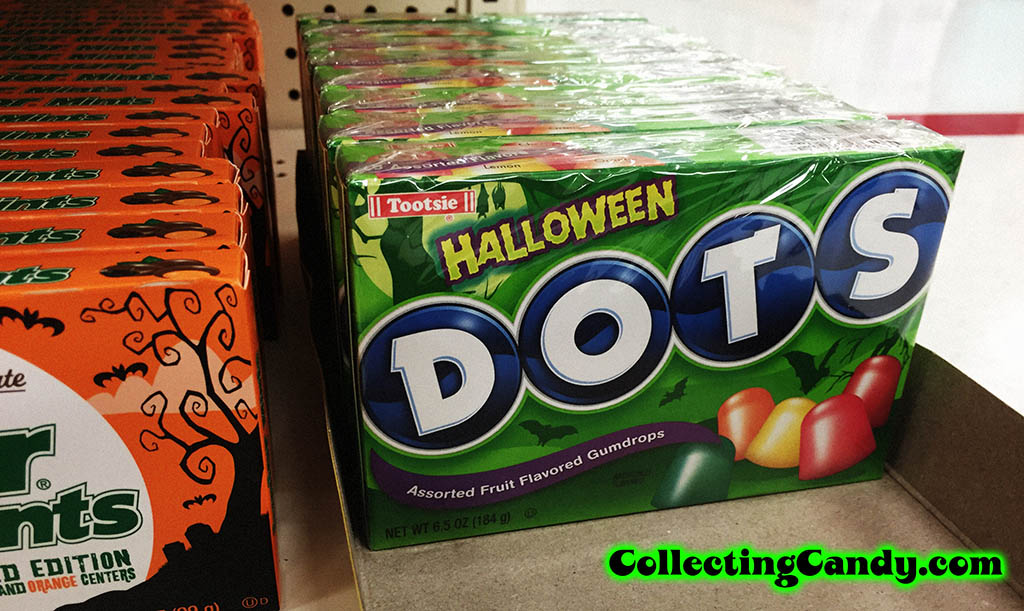 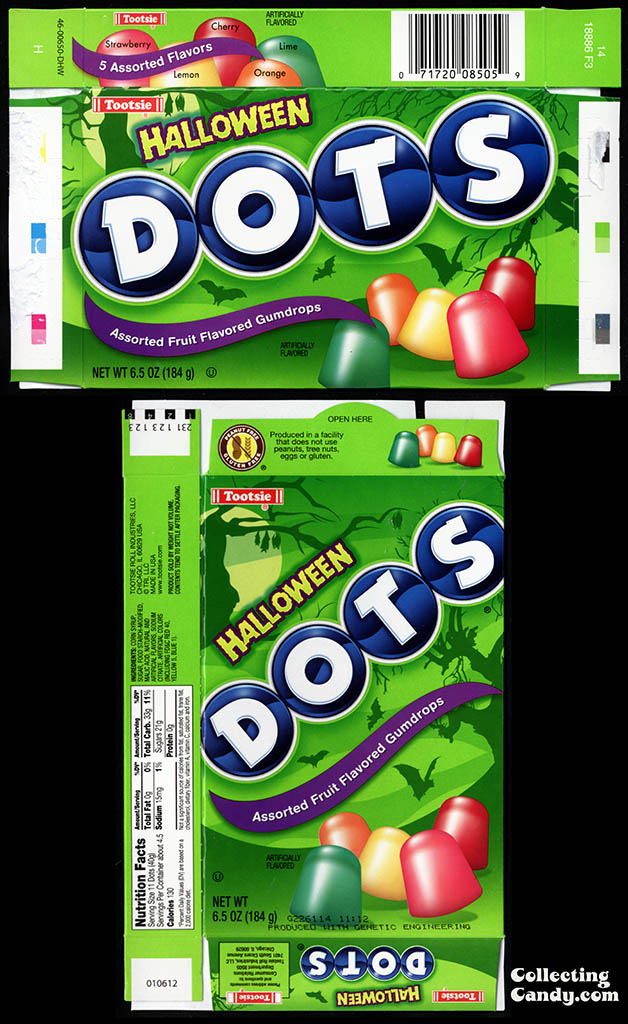 Another great release this year came from Haribo USA in the form of their “Ghostly Gummies”: 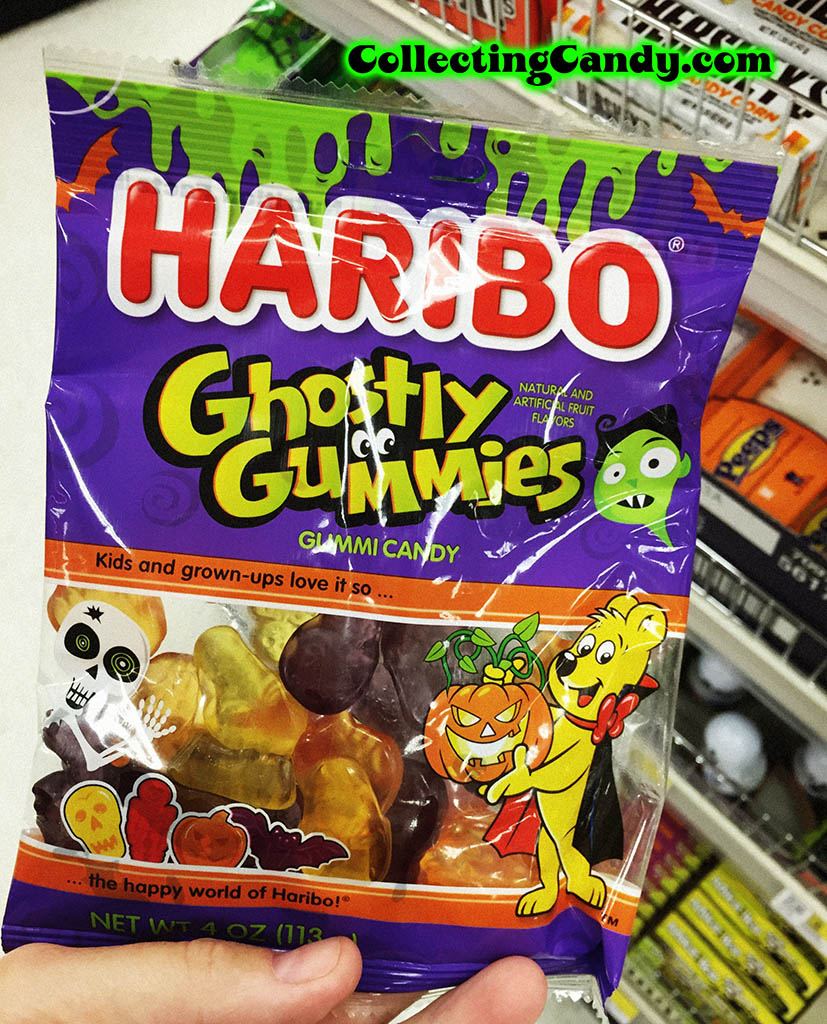 I love the graphical treatment on this packaging: 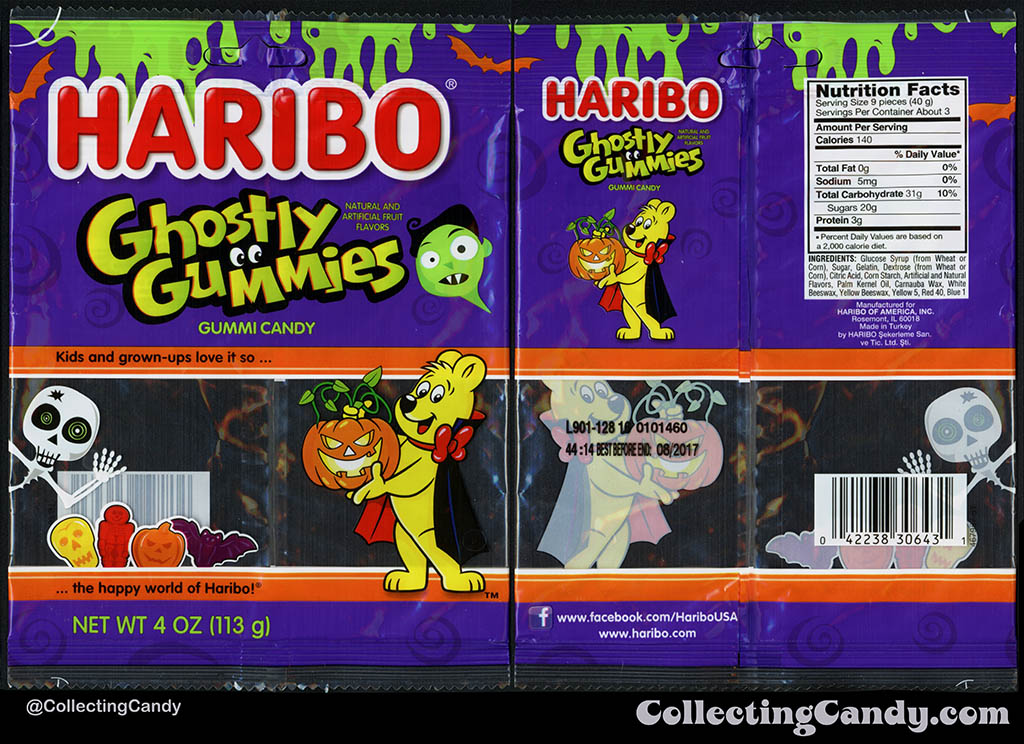 Last but not least, I have one more piece to share.  I had mentioned in my Kit Kat post earlier on in the Countdown that Hershey has really stepped it up in terms of their seasonal packaging design lately (and their packaging design in general).   One of my favorite overlooked bits this year was the bag for their Heath Snack Size Halloween offering.  It’s got a great little skeleton character on it that to me appears to be dancing in front of his coffin with his head in his own hands, and for that it makes my “Best Of” list.  Here it is: 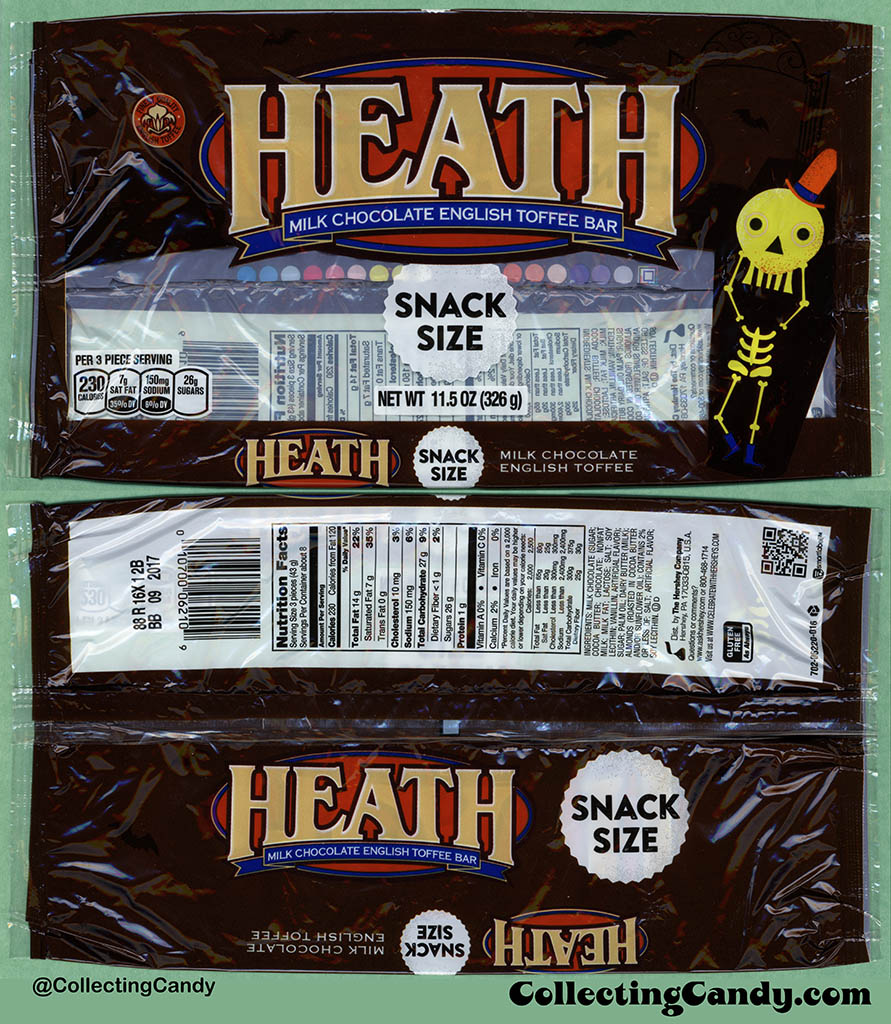 And that concludes my coverage of the Rest-of-the-Best for 2016.  I hope you enjoyed it and I hope you all have a great Halloween today with the Trick-or-Treat of it all, whether you are on the giving or receiving end of things.  Be safe and have fun!  I’ll see you next time!

A New York City based writer, editor and sometimes actor. After spending much of the 1990′s in the comic book business helping tell the stories of Marvel Comics’ X-Men as series editor, he has since split his time between developing his own entertainment properties while still consulting and working on others. Having been described as “the Indiana Jones of lost and forgotten candy”, Jason is one of the country’s premier candy collectors and historians with his discoveries appearing in countless blogs, magazines, newspaper articles, and books. Always happy to share his knowledge and unique perspectives on this colorful part of our popular culture, Jason has consulted with New York’s Museum of Food and Drink and has also been a featured guest on Food Network’s Heavyweights, France’s M6 Capital, and New York’s TheActionRoom.com. My Google Profile+
View all posts by Jason Liebig →
This entry was posted in Chocolate, CountdownToHalloween, Gummies, Halloween, Holiday, Nestle, Peanut Butter and tagged candy collecting, candy collection, candy collector, candy wrapper collection, candy wrapper collector, collectible, collecting candy, confectionery, confections, Halloween, Halloween candy, packaging, packaging design, seasonal candy, sweets, vintage candy wrappers, wrapper. Bookmark the permalink.

2 Responses to The Rest Of the Best Of 2016’s New Halloween Candy!