Back during the late 1980’s and early 1990’s, the Beich’s candy company was going through some rapid corporate transformations, but along the way they played around with Halloween seasonal releases of their most enduring product; Laffy Taffy.   Make the jump to check it out!

Right around 1990, the Beich’s candy company would be acquired by Sunmark/Concorde Brands, which was also becoming a part of Nestle at the time.   This would eventually lead to things like Beich’s Laffy Taffy enveloping Sunmark’s Tangy Taffy – with Tangy Taffy surviving but taking on the Laffy Taffy brand name, among other things.  It’s a more complicated bit of confectionery history than I want to get into today, but needless to say, the folks at Beich’s continued to work on creating fun seasonal variations of their products through those rapidly changing times.  That is certainly true where their Halloween seasonal product was concerned.

Several of the pieces I have to share today came to me by way of a design contractor who worked with Sunmark, and while they have the appearance of a final product, they might have actually been pre-release mockups of some sort.  The only hint that some of these aren’t final production releases is that they lack UPC codes on the packs.   I’m going with the assumption that these did eventually make it into retail circulation, but you never know, these might not have ever been distributed.

In 1992, Beich’s Laffy Taffy packaging featured an arched logo style which can be seen in the following multi-pack 7oz bag: 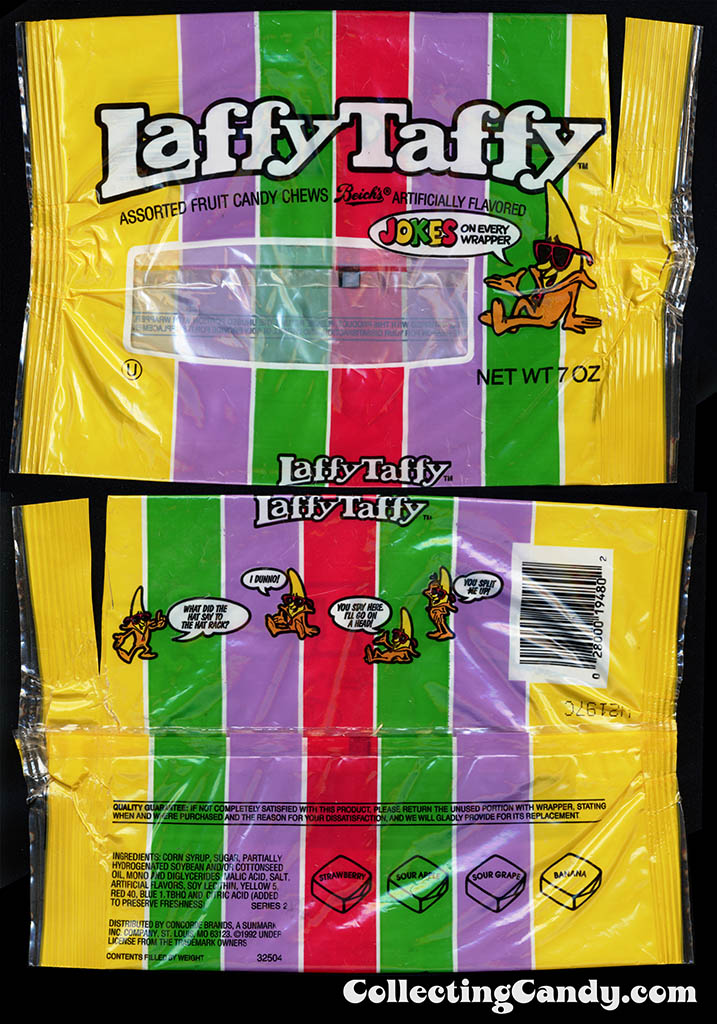 I have a Halloween-themed package sample that clearly mirrors the design and look of that 1992 pack, replacing the banana mascot with that of a ghost.  Even the flavor assortment of the Halloween release remains the same as the standard; Strawberry, Sour Apple, Sour Grape, and Banana.  Check it out: 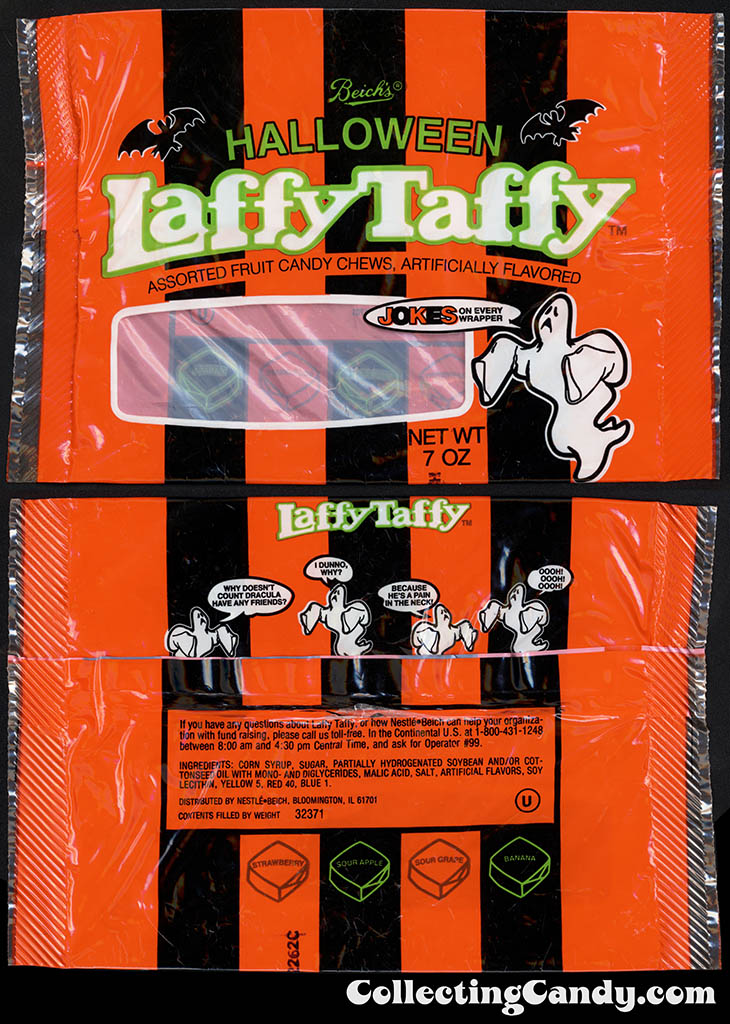 I  have a remarkably similar Halloween design package from this era that sports a number of notable differences.  First, the package sports a horizontally straight Laffy Taffy logo rather than the previously-used arched version.  It also features more than just the ghost character, as it includes a masked version of the Sour Apple mascot found on standard Laffy Taffy packaging in 1993.  Like the previous package example, this one also lacks a UPC code, making it a possible pre-release prototype or mock-up: 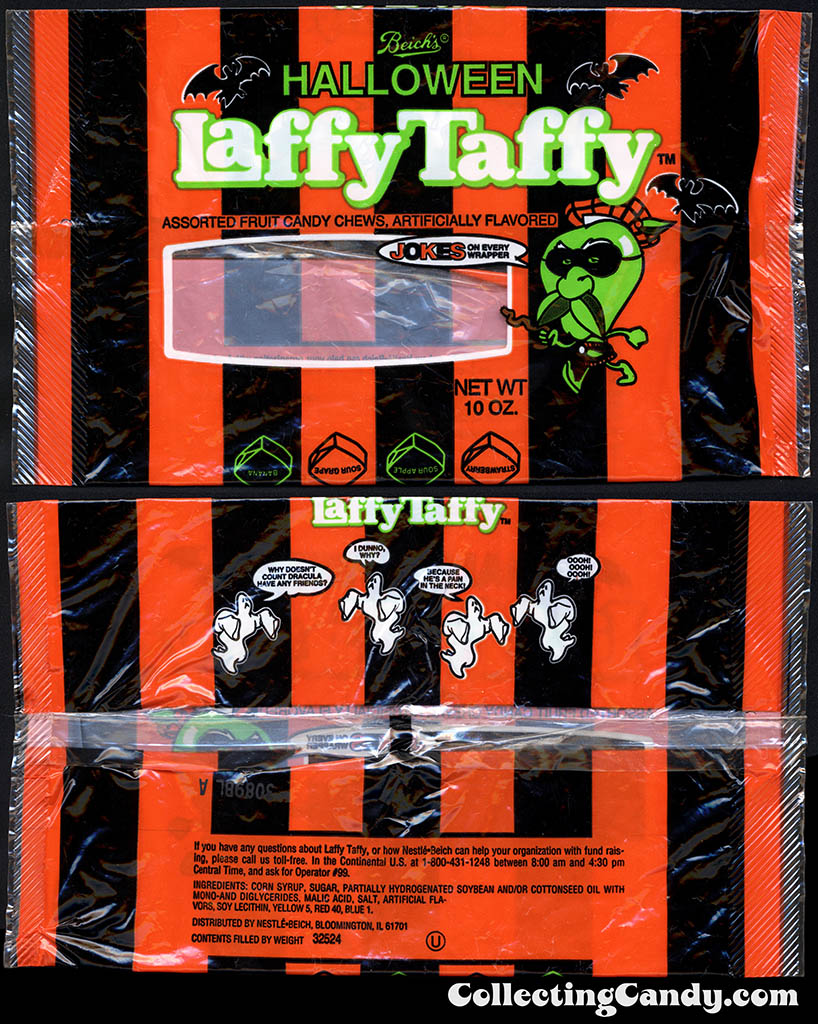 Here’s a standard all-year-round Laffy Taffy multi-pack from 1993 that features the same Sour Apple mascot as part of a diverse group that includes the Banana character from the 1992 packaging: 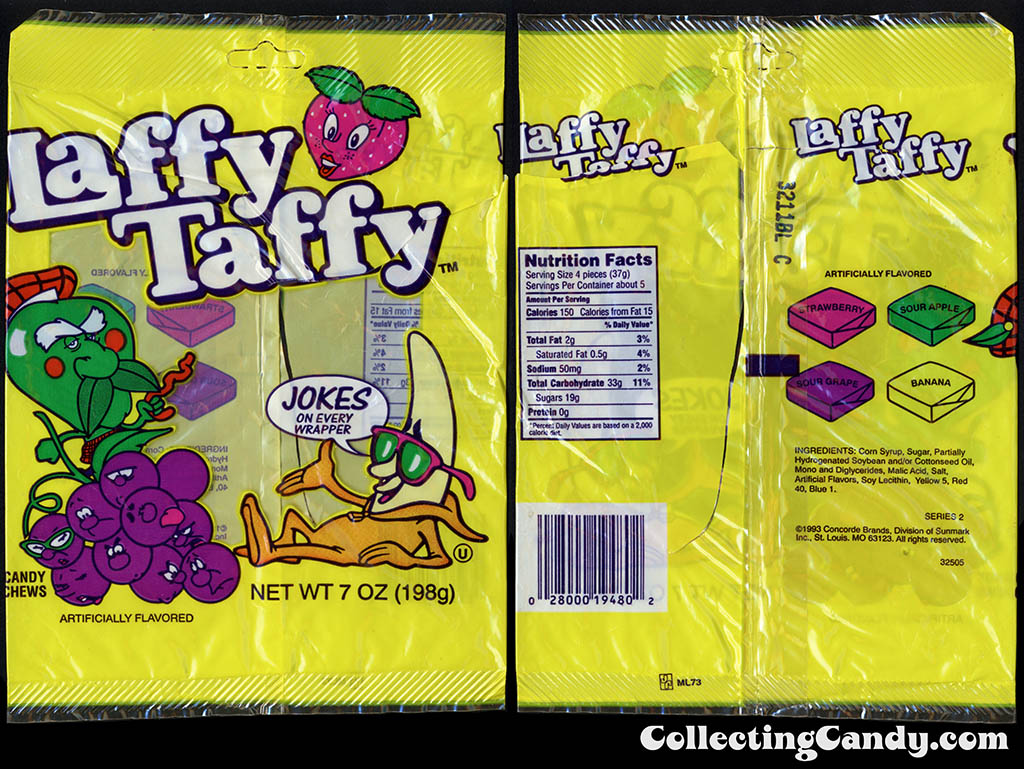 All in all, today’s write-up doesn’t contain a lot of hard hitting confectionery history, but I’m hoping that it serves as an entertaining glimpse as well as a historical marker.  With more research and luck, I plan to eventually return to Laffy Taffy to assemble a clearer picture of this brand and its complete evolution.

And that’s everything I’ve got for today’s post on Beich’s Halloween Laffy Taffy of the early 1990’s.  See you next time!

A New York City based writer, editor and sometimes actor. After spending much of the 1990′s in the comic book business helping tell the stories of Marvel Comics’ X-Men as series editor, he has since split his time between developing his own entertainment properties while still consulting and working on others. Having been described as “the Indiana Jones of lost and forgotten candy”, Jason is one of the country’s premier candy collectors and historians with his discoveries appearing in countless blogs, magazines, newspaper articles, and books. Always happy to share his knowledge and unique perspectives on this colorful part of our popular culture, Jason has consulted with New York’s Museum of Food and Drink and has also been a featured guest on Food Network’s Heavyweights, France’s M6 Capital, and New York’s TheActionRoom.com. My Google Profile+
View all posts by Jason Liebig →
This entry was posted in 1990's, CountdownToHalloween, Halloween, Nestle, Wonka and tagged 1990's, 1990's candy, 90's, 90's candy, candy collecting, candy collection, candy collector, candy wrapper collection, candy wrapper collector, collectible, collecting candy, confectionery, confections, Halloween, Halloween candy, Laffy Taffy, packaging, packaging design, sweets, Tangy Taffy, vintage candy wrappers, vintage Halloween, wrapper. Bookmark the permalink.

1 Response to Beich’s Halloween Laffy Taffy of the early 1990’s!