For the Halloween season this year, Wrigley delighted candy fans by releasing a new Skittles flavor mix with a seasonal theme called “Cauldron”.   This follows up their release last year of a super-fun Halloween Mix for their Starburst brand that featured Frankenstein’s Monster on the packs.  Make the jump to check them both out!

I’ll be covering the fun new Cauldron Skittles launch for 2016, but before I do that I’d like to showcase what Wrigley brought us last year with their Starburst Halloween Mix, because they’re pretty cool (and they’ve returned for the season again this year).

I first found Starburst Halloween Mix in the standard-size packs.  Here’s a wrapper: 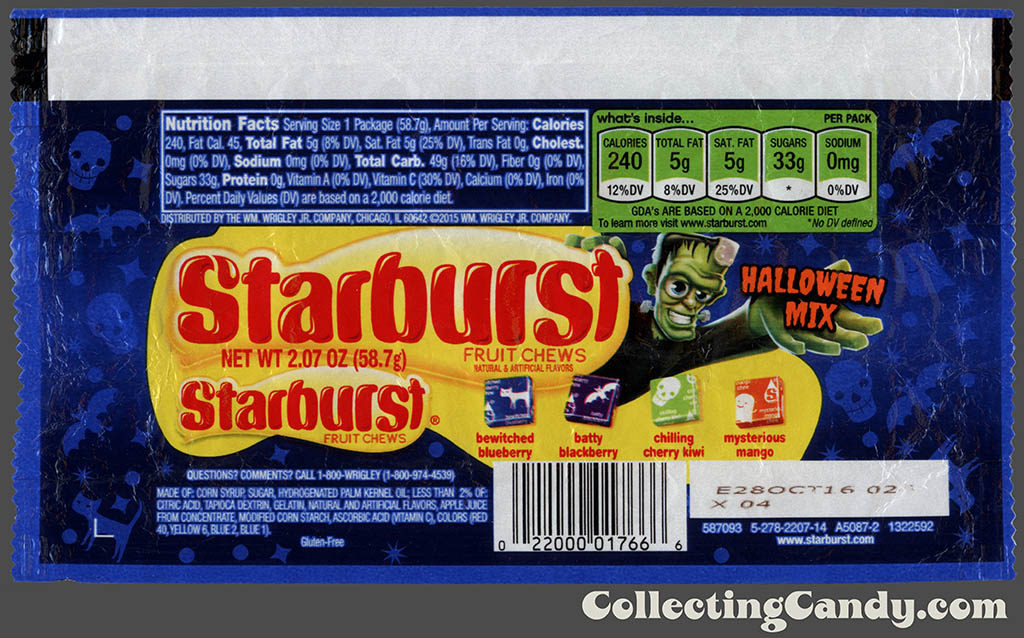 I love the Frankenstein’s Monster illustration – it’s such a fun touch and I always love to see Frankenstein evoked on candy packages.  If you look closely on that Starburst wrapper, you can see the individual flavors highlighted; bewtiched blueberry, batty blackberry, chilling cherry kiwi, and mysterious mango.   Each Halloween-themed flavor Starburst also received a neat graphical wrapper.

Available in more than just the individual packs, Starburst Halloween Mix were sold in a larger 11 oz bag as well as a Fun Size multipack. 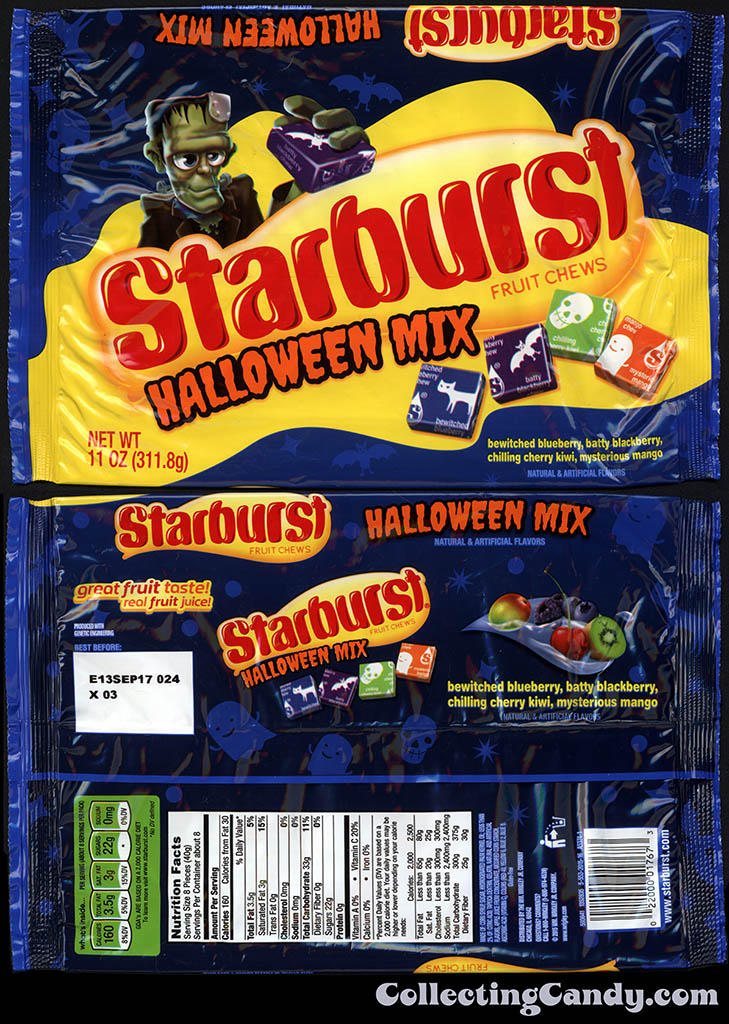 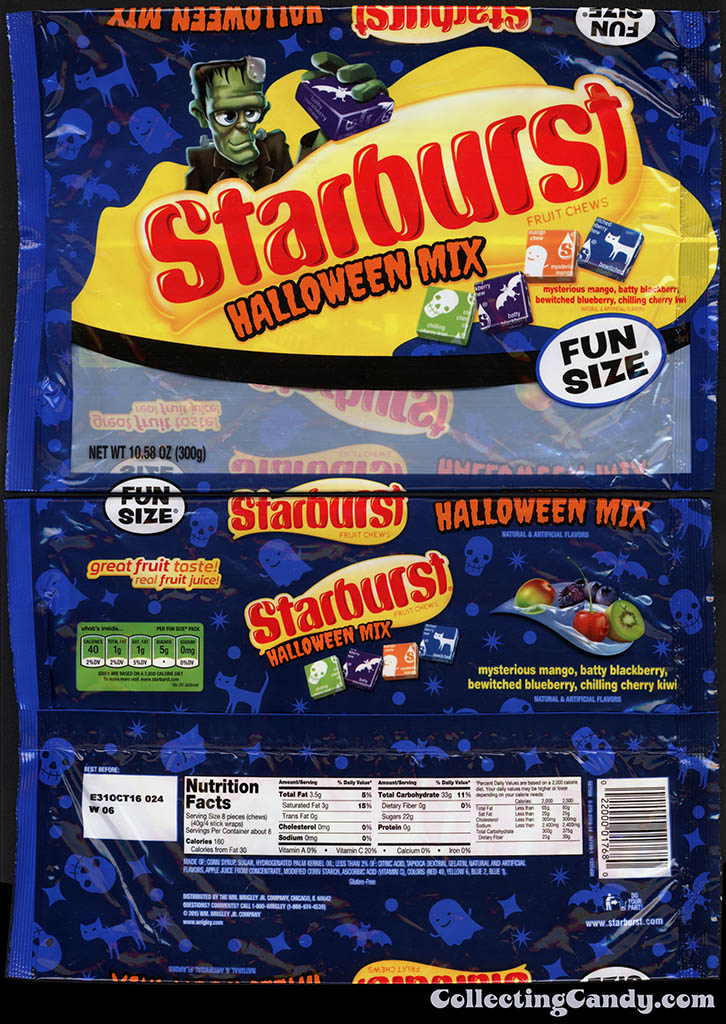 The Fun Size multi-pack package offered up its Halloween Mix in little two-packs of individually wrapped Starbursts, providing yet another bit of unique packaging: 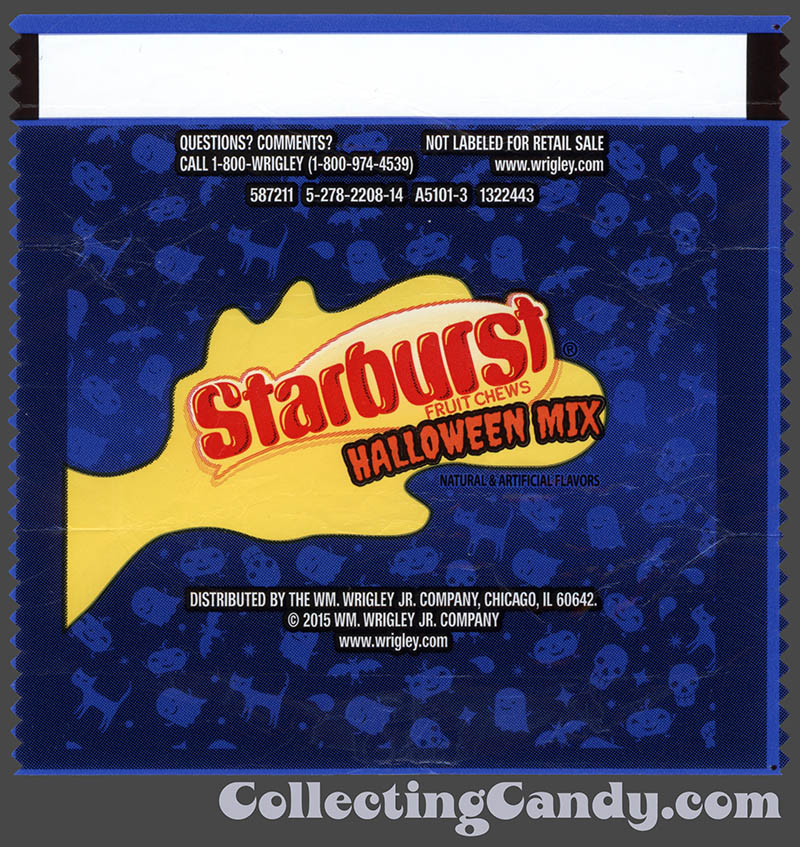 I thought Starburst doing a Halloween mix last year was a pretty dynamite idea and they must have liked the response they got to it because not only did it return in 2016 but it was joined by the release of a new Halloween-themed Skittles – Cauldron!

I first found the Cauldron Skittles in a small counter top display box at my local deli:

The packaging is pretty cool for these, with a witches cauldron illustration at the base of the wrapper and the “Cauldron” name spookily spelled out on top: 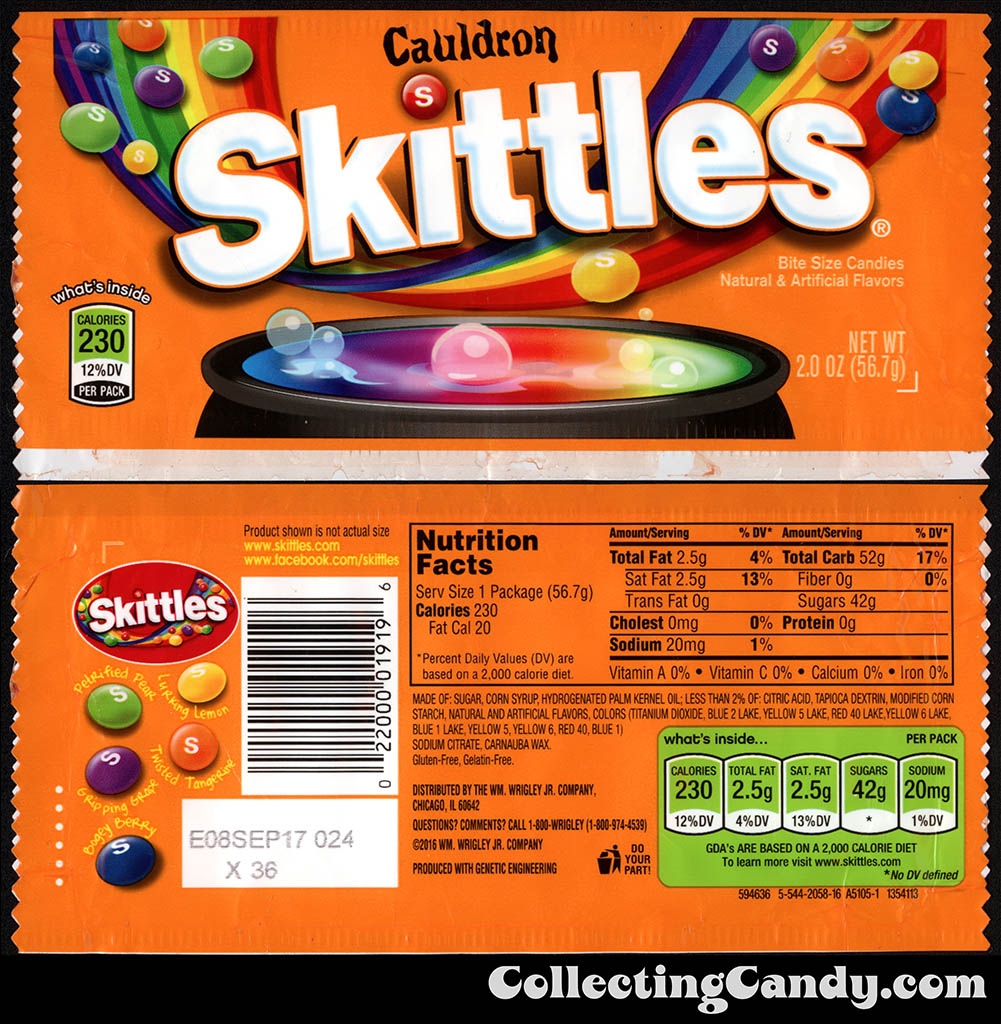 Like the Halloween Mix Starburst before them, Cauldron Skittles have also been released in a larger pack size along with a Fun-Size version.  I haven’t picked up the Fun-Size version but I do have an example of the larger 10 oz package here: 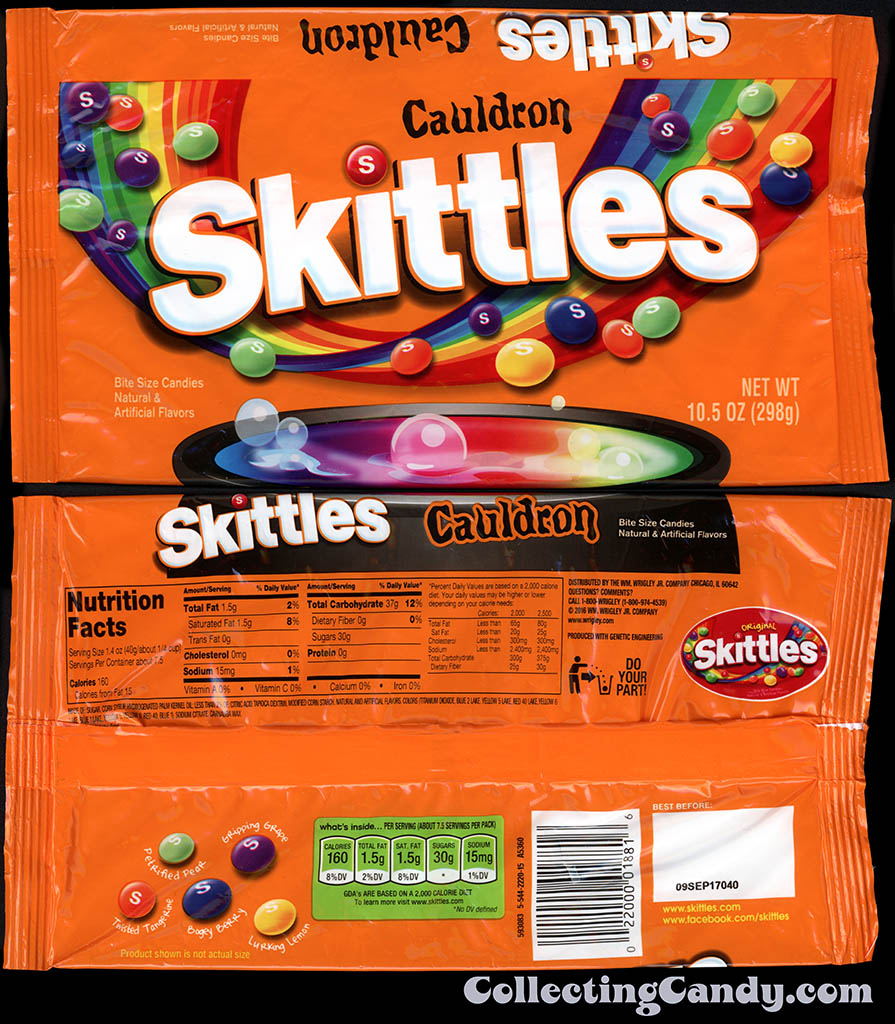 As you can see, the Halloween season has gotten a lot more colorful and fun thanks to these new seasonal releases from Starburst and Skittles.  I suspect this is just the beginning.

That’s everything I’ve got to share on Starburst Halloween Mix and the newest Skittles release for Halloween 2016, Cauldron Skittles!  See you next time!

A New York City based writer, editor and sometimes actor. After spending much of the 1990′s in the comic book business helping tell the stories of Marvel Comics’ X-Men as series editor, he has since split his time between developing his own entertainment properties while still consulting and working on others. Having been described as “the Indiana Jones of lost and forgotten candy”, Jason is one of the country’s premier candy collectors and historians with his discoveries appearing in countless blogs, magazines, newspaper articles, and books. Always happy to share his knowledge and unique perspectives on this colorful part of our popular culture, Jason has consulted with New York’s Museum of Food and Drink and has also been a featured guest on Food Network’s Heavyweights, France’s M6 Capital, and New York’s TheActionRoom.com. My Google Profile+
View all posts by Jason Liebig →
This entry was posted in CountdownToHalloween, Halloween, Mars and tagged candy collecting, candy collection, candy collector, candy wrapper collection, candy wrapper collector, collectible, collecting candy, confectionery, confections, Frankenstein, Halloween, packaging, packaging design, Skittles, spooky, Starburst, sweets, vintage candy wrappers, witches, wrapper, Wrigley. Bookmark the permalink.