Twenty-Three Years of Starbucks Chocolate and Candy and M&M’s — Oh My!

Starbucks Coffee has a long history of offering their own branded confections – in fact it goes back much farther than I expected.  Today, I’ve got an array of Starbucks confectionery product packaging spanning twenty-three years that I’m excited to share.  Make the jump to check them out!

Twenty-three years is an odd number to throw out, and it is entirely to do with that being the furthest back I can confidently point to as far as an actual Starbucks confectionery product example.  Tracking the history of Starbucks Coffee-branded confections is especially challenging, in no small part due to the fact that where their confectionery offerings are concerned, they have not followed a consistent development path.  At least none that I’ve been able to deduce.  In fact, each era and product I’ve uncovered seems to have a unique identity all its own.  One periods offerings do not directly lead to another and there are stretches where Starbucks did not offer its own branded confectionery products at all, giving each new product launch the sense of a fresh start and an independence of whatever came before.

Given the realities of how Starbucks went about product releases in this category, what I present today is less of a strictly-defined history and more of an organized gathering of historical glimpses.

Going back those twenty-three years, the first piece I have to share today is a cardboard band that likely wrapped around a clear cellophane or plastic package containing six ounces of “Espresso Chocolates”.  This first one features French/English bilingual packaging, placing its origins in Canada.

Next up from the following year and from the USA are two similar bands:

Each of these features a 1994 copyright with “best by” dates from 1997 and 1998 respectively.  I’ve opted to categorize them by their earlier, original copyright date, but it’s clear that these were offered for a handful of years.

This next wrapper is undated but likely hails from the mid-1990’s.  It was produced by the wonderful Seattle Chocolate Company and may have been produced exclusively for Starbucks locations, but it is not clear if that’s the case.  Perhaps it was something that was sold around Seattle at the time, a “home team” theme if you will.

I believe that same Dark Chocolate Truffle bar would be given more prominent Starbucks branding a few years later in the following form.  It should be noted that the Seattle Chocolate brand name is nowhere to be found on this next wrapper: 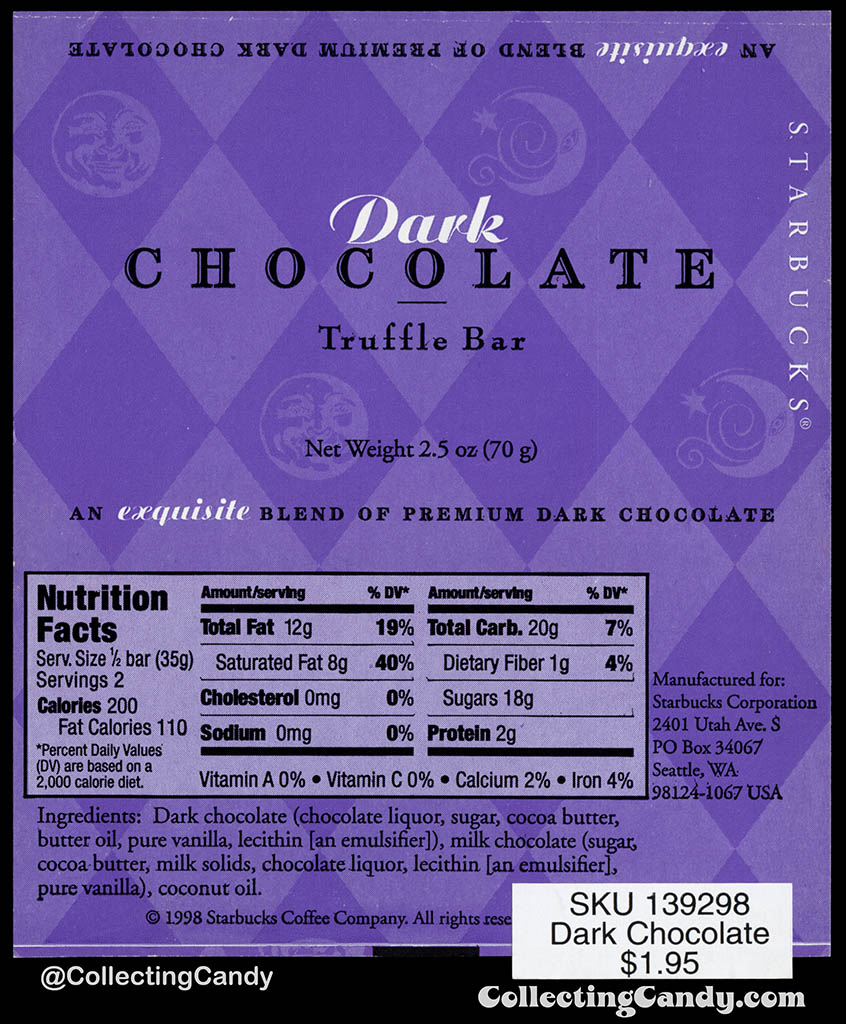 The 1998-1999 period would present us with what appears to be the first full-blown lineup of Starbucks Coffee-branded chocolate bars.  I have six different variety wrappers from this era: 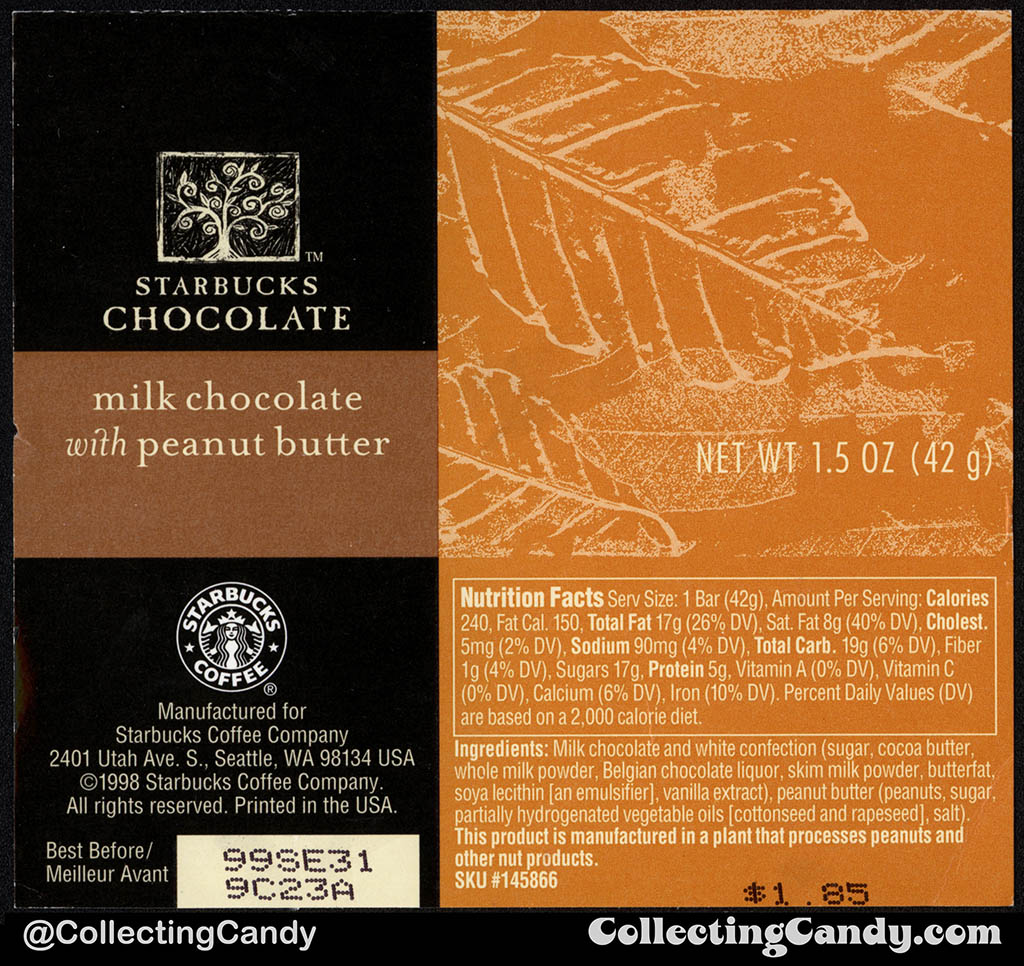 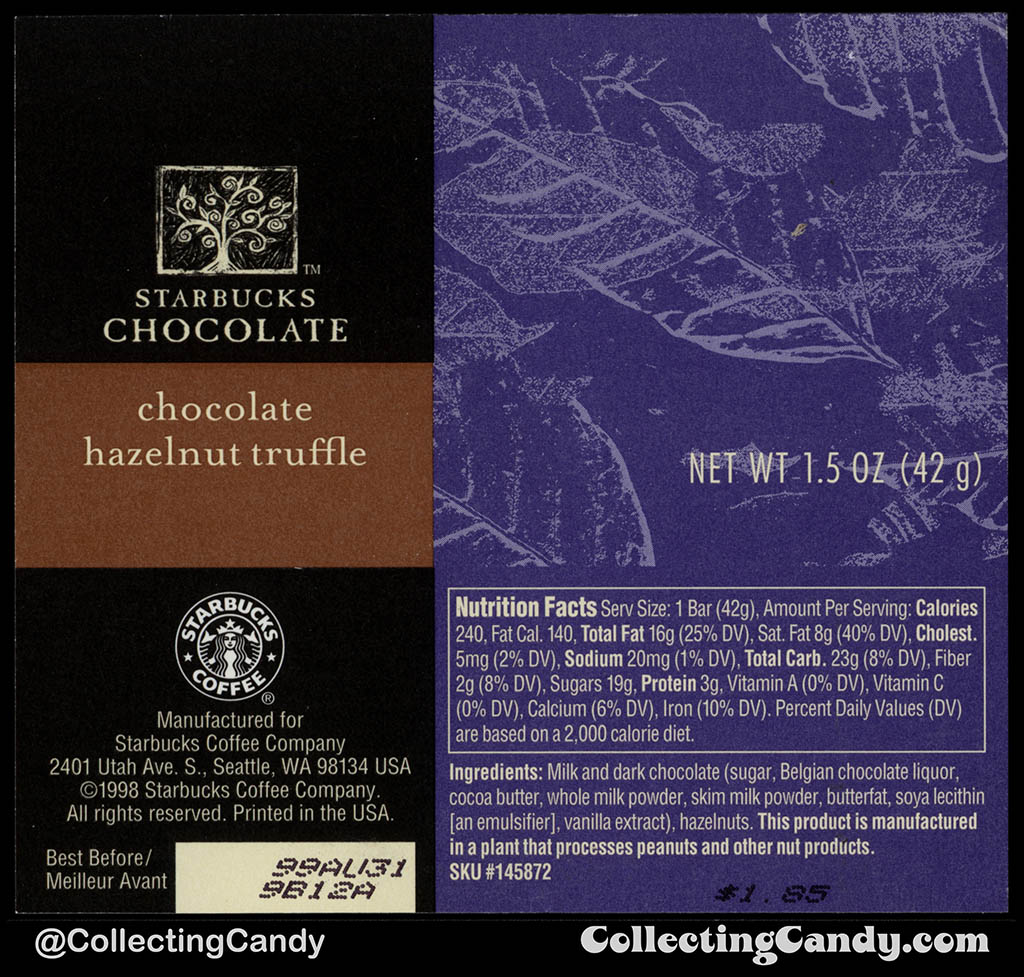 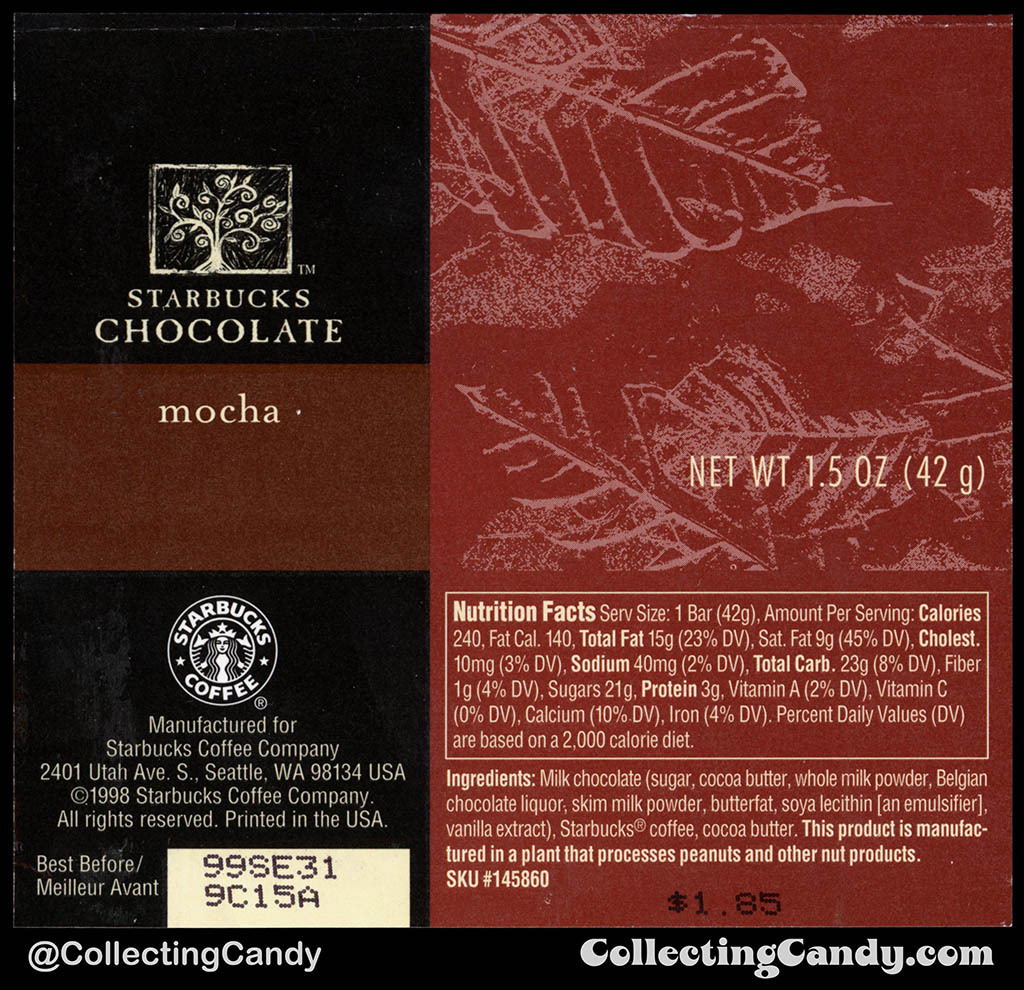 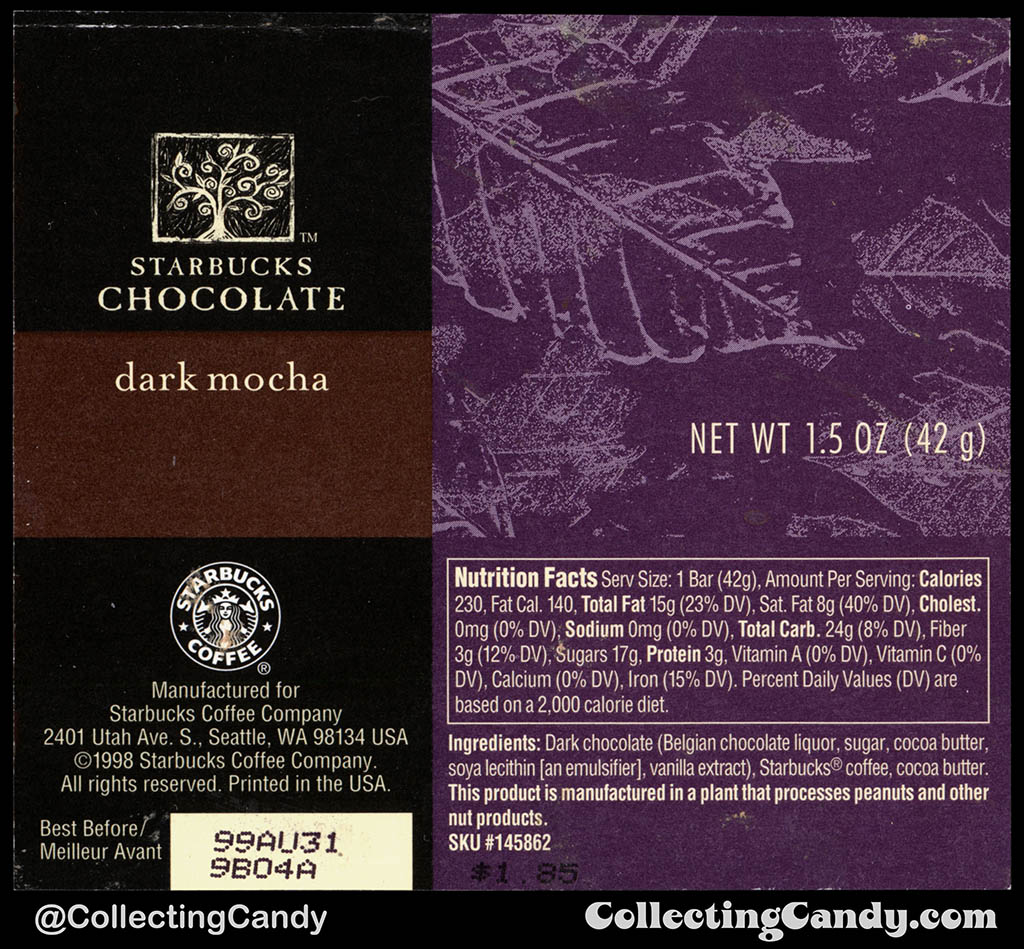 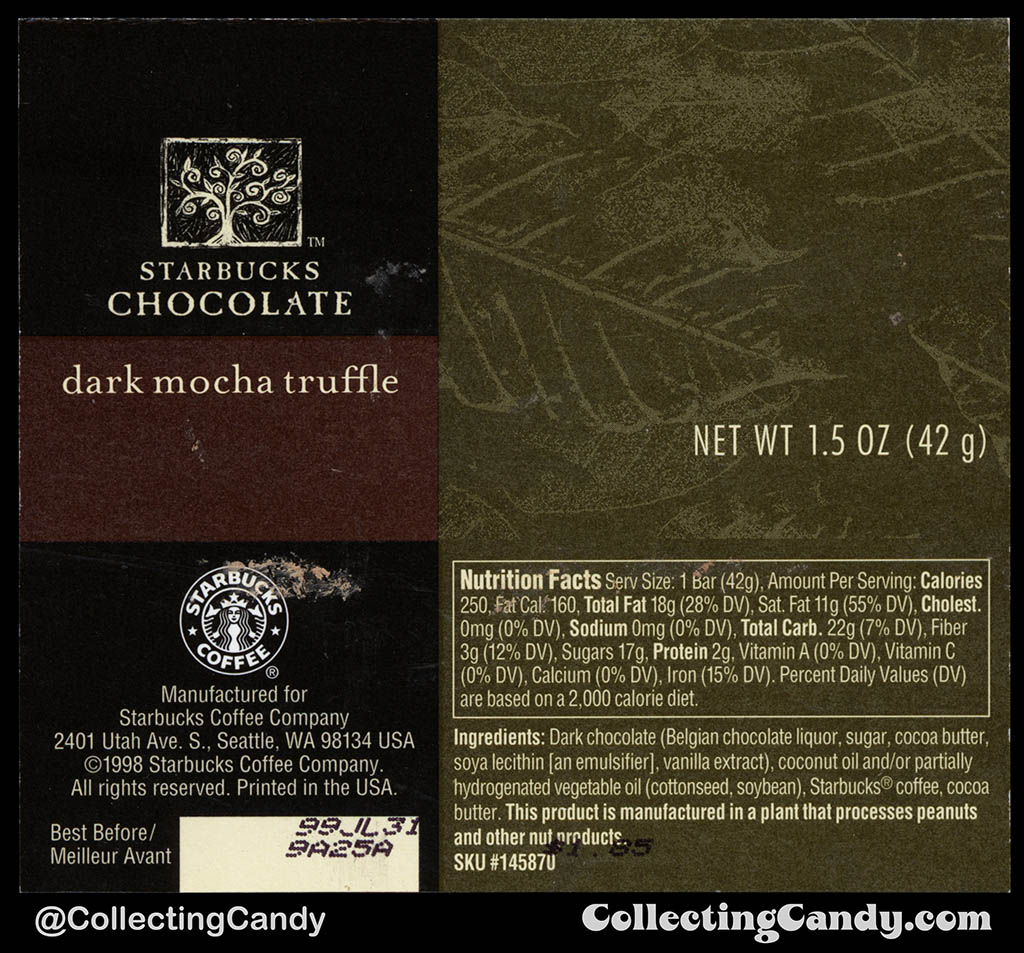 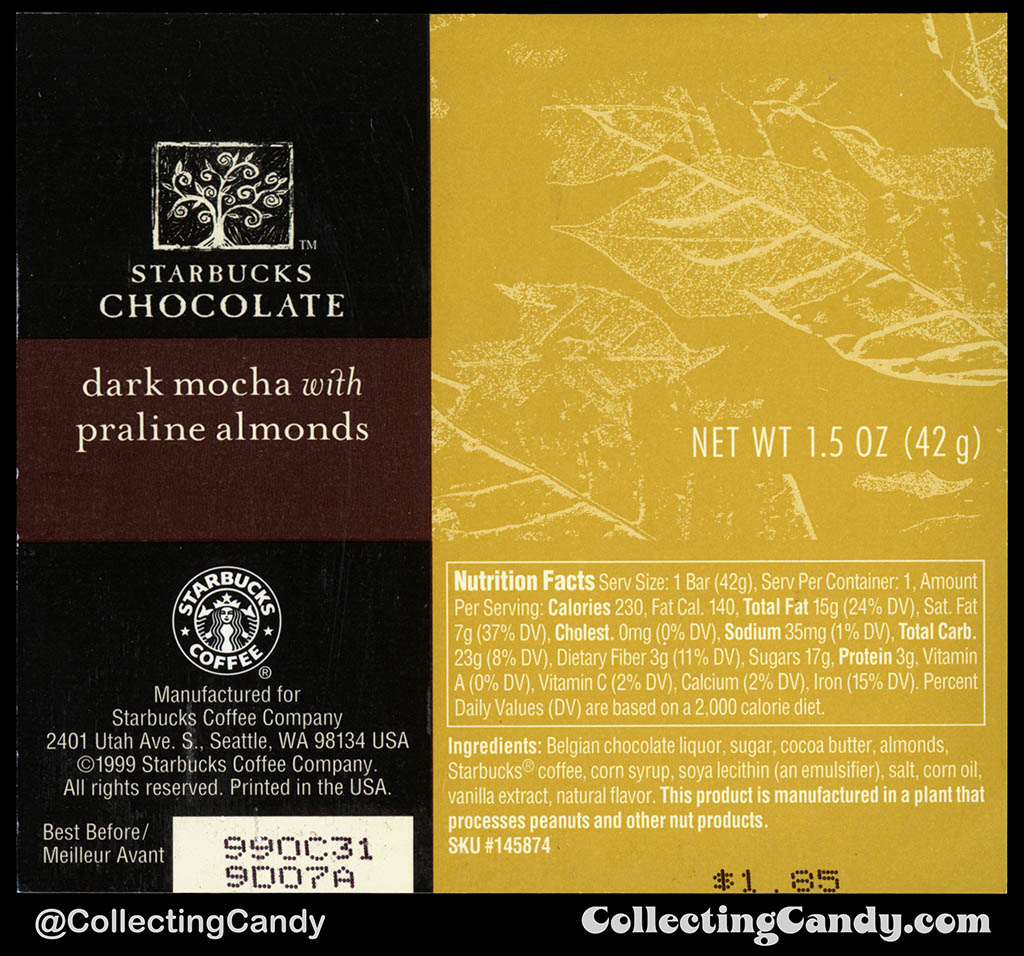 In the year 2000, Starbucks would offer up a series of chocolate bars featuring a wrapper design quite different from the previous version.  Each of these also included the compelling trademark line “When Coffee Dreams, it Dreams of Chocolate”.  I think that’s a pretty spectacular line: 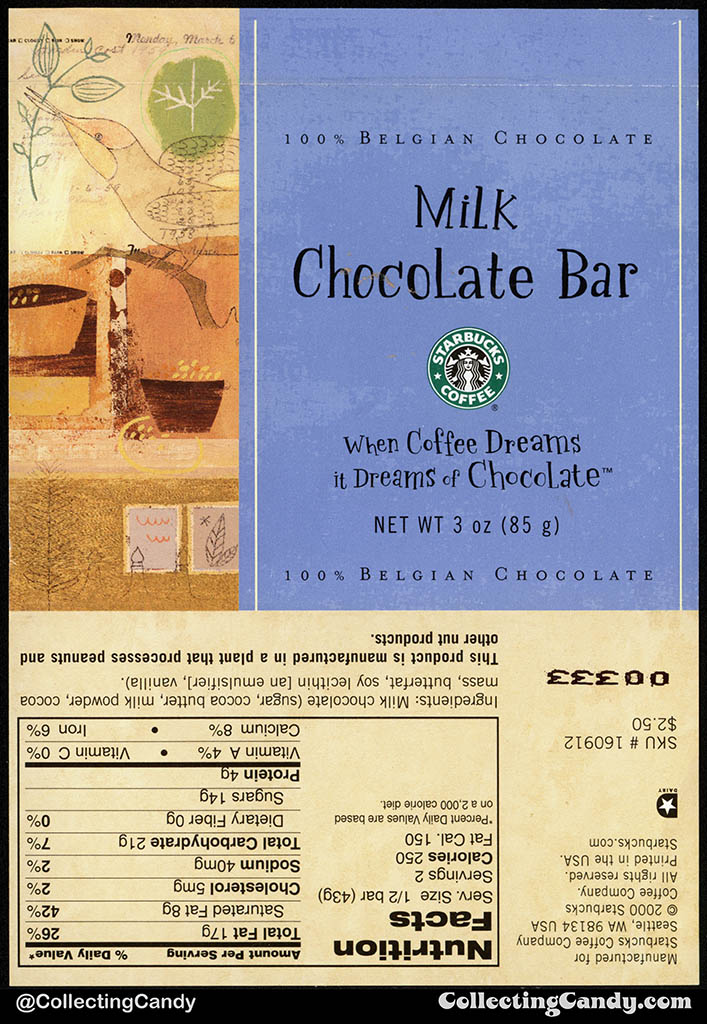 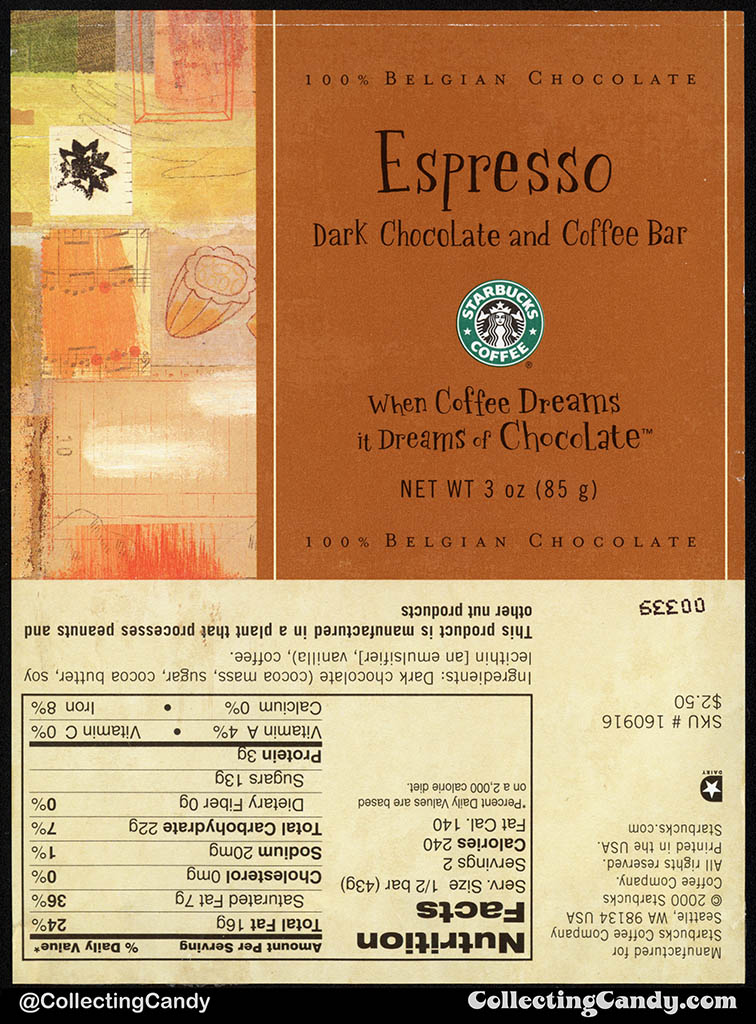 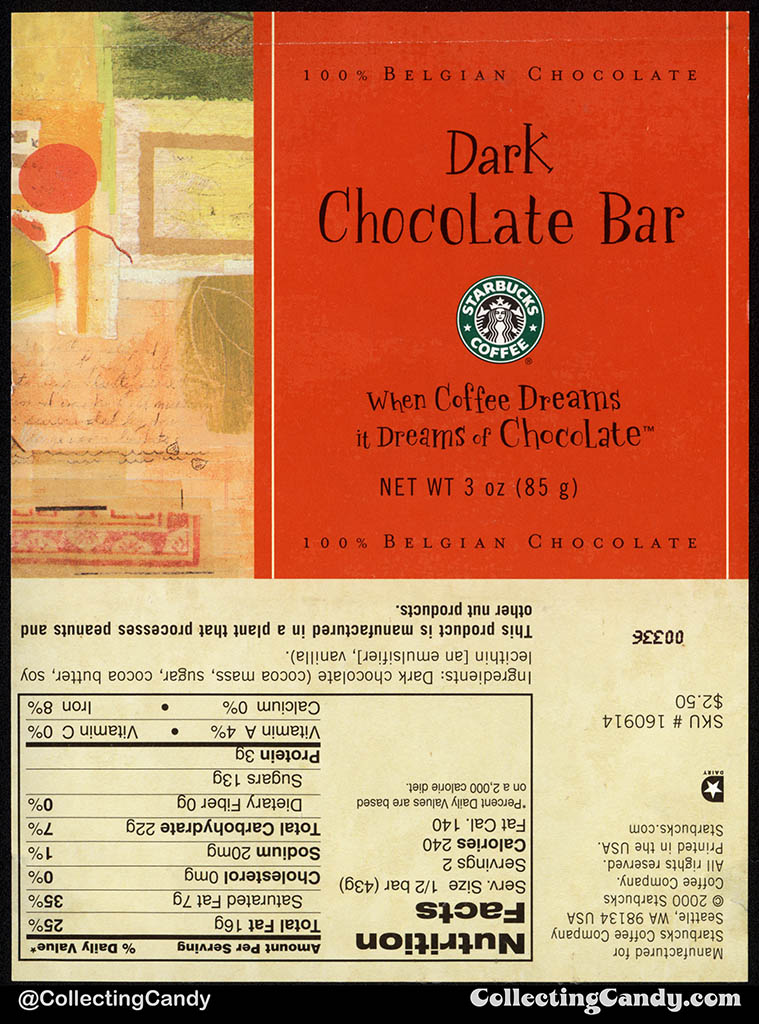 I’ve got a cardboard band from the following year that featured the same look as those three, but must have been for a smaller style offering:

In 2004, Starbucks would offer up an “origins” assortment that featured four distinctive blends of chocolate mini bars. 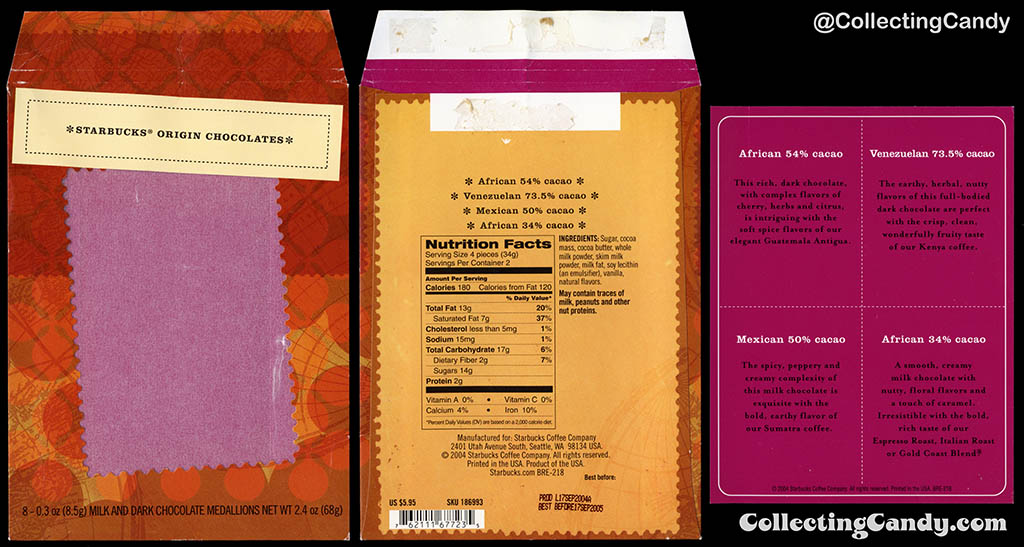 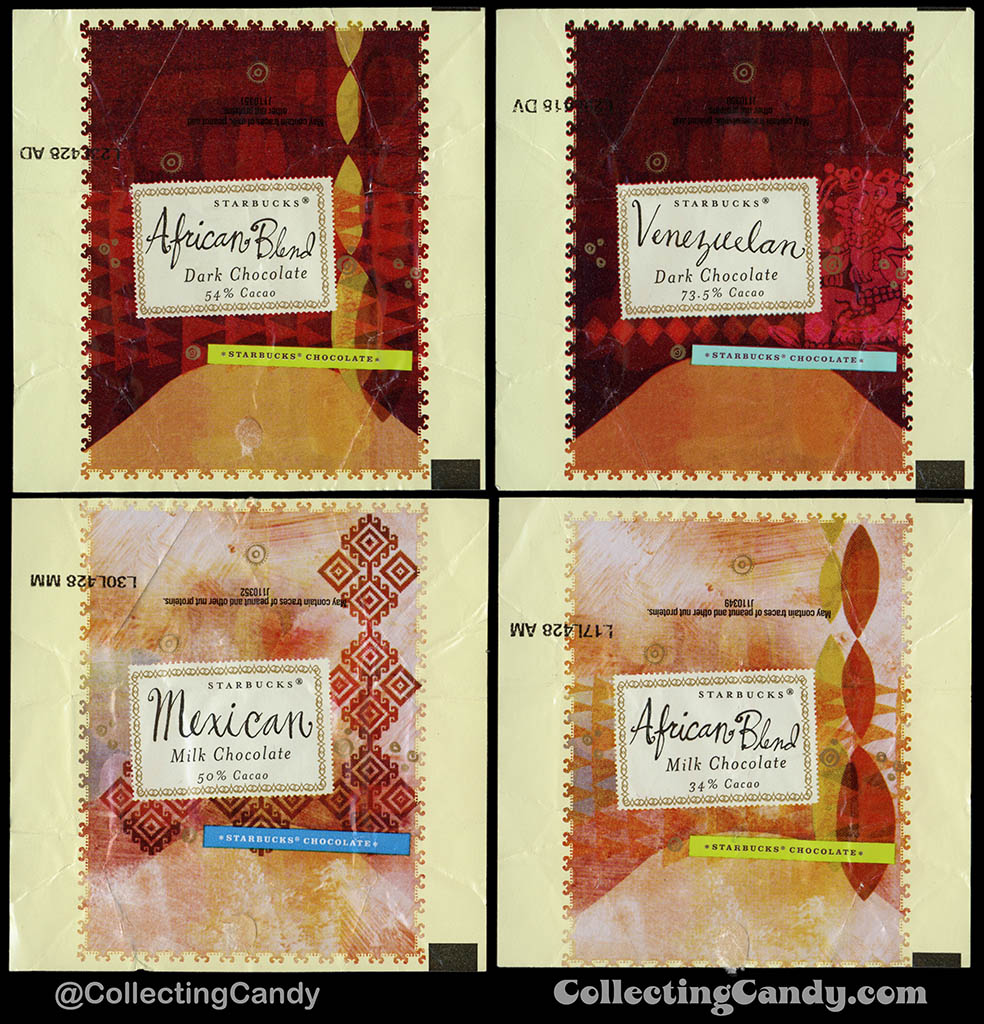 Oddly, I have two similar wrappers that appear to have originated from the Canadian Starbucks side of things, albeit a year earlier: 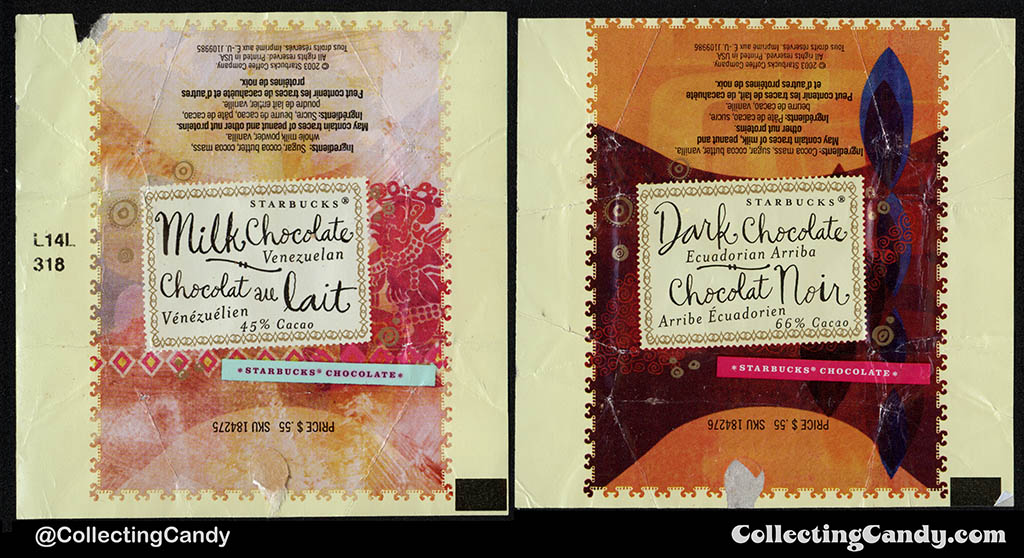 Regular offerings of these smaller, individually-wrapped bars would continue for the next few years: 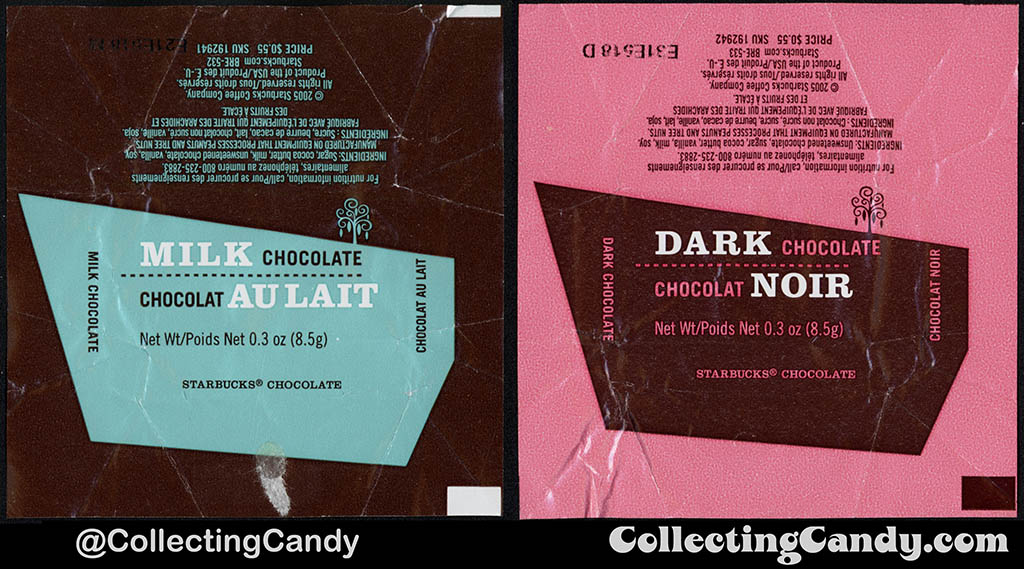 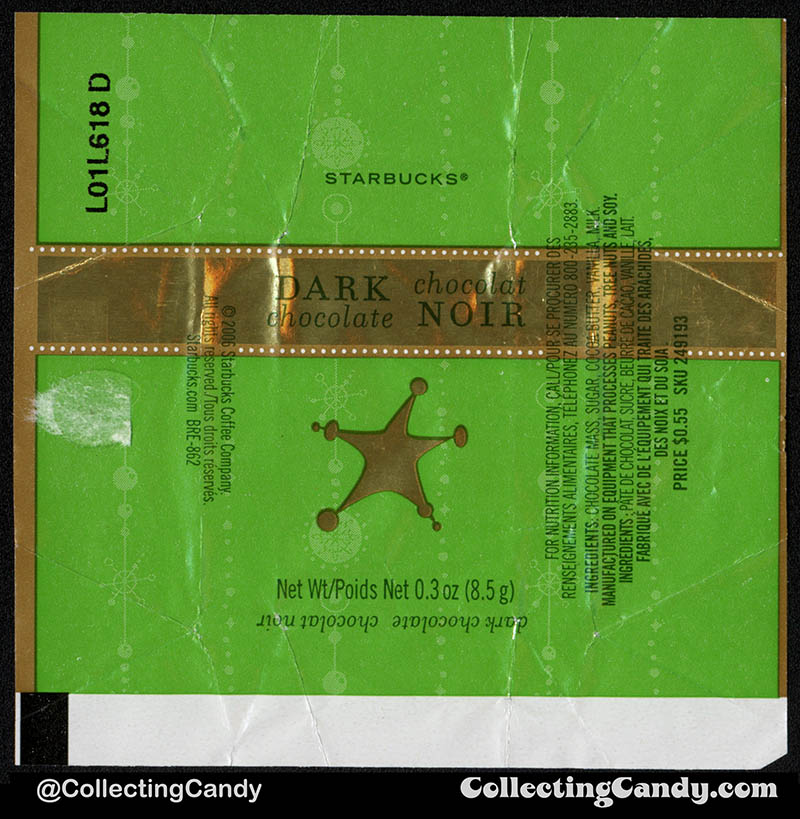 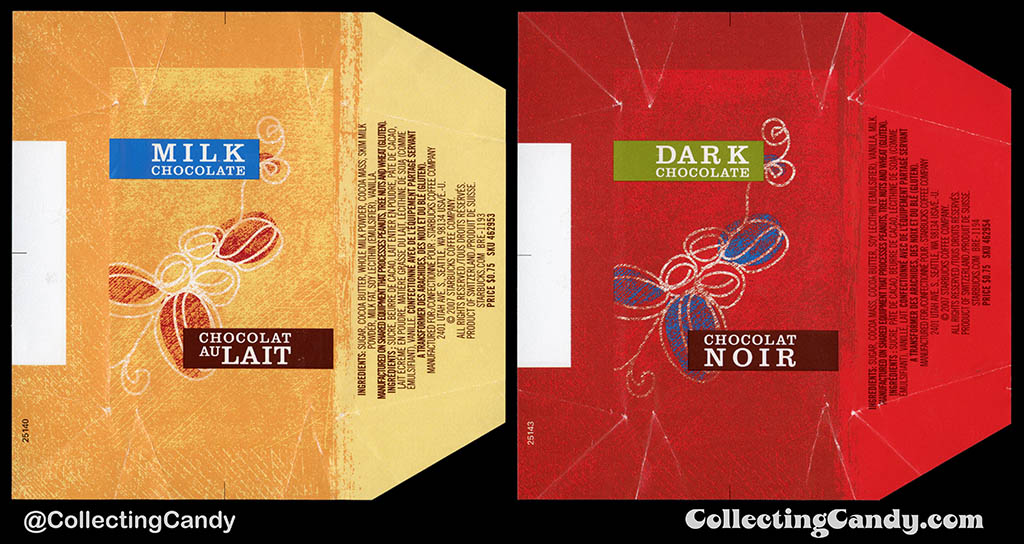 In 2008, two very different styles of full-size chocolate bars appeared.  It’s unclear why these each feature such different designs: 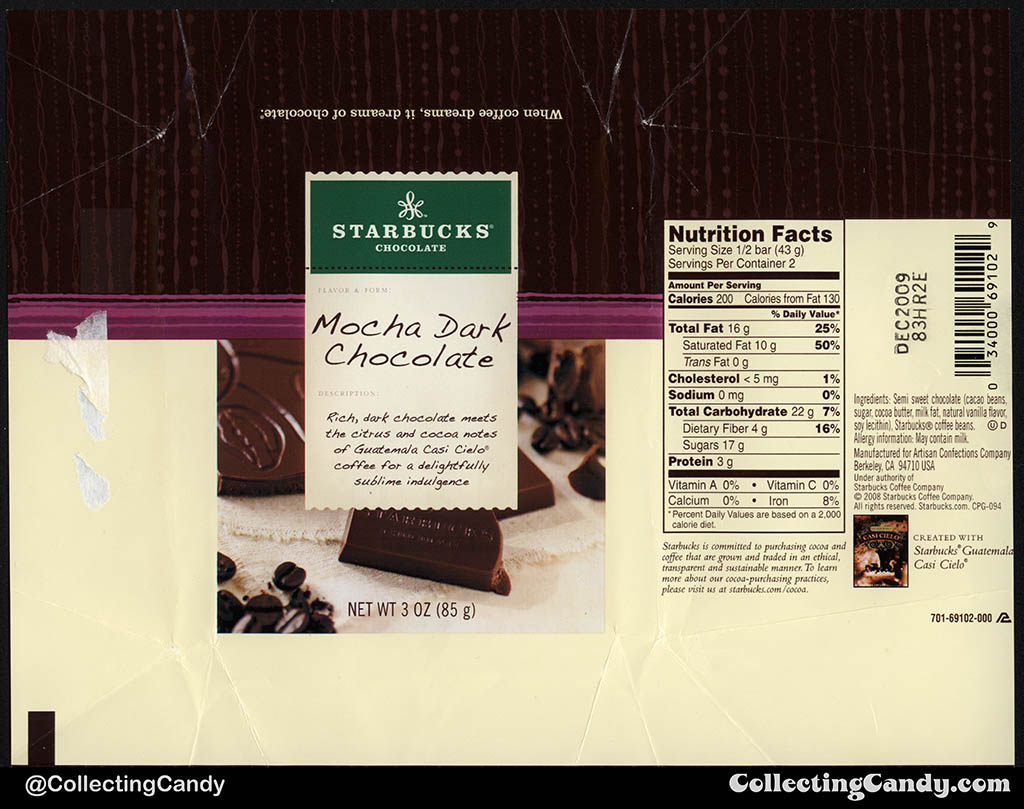 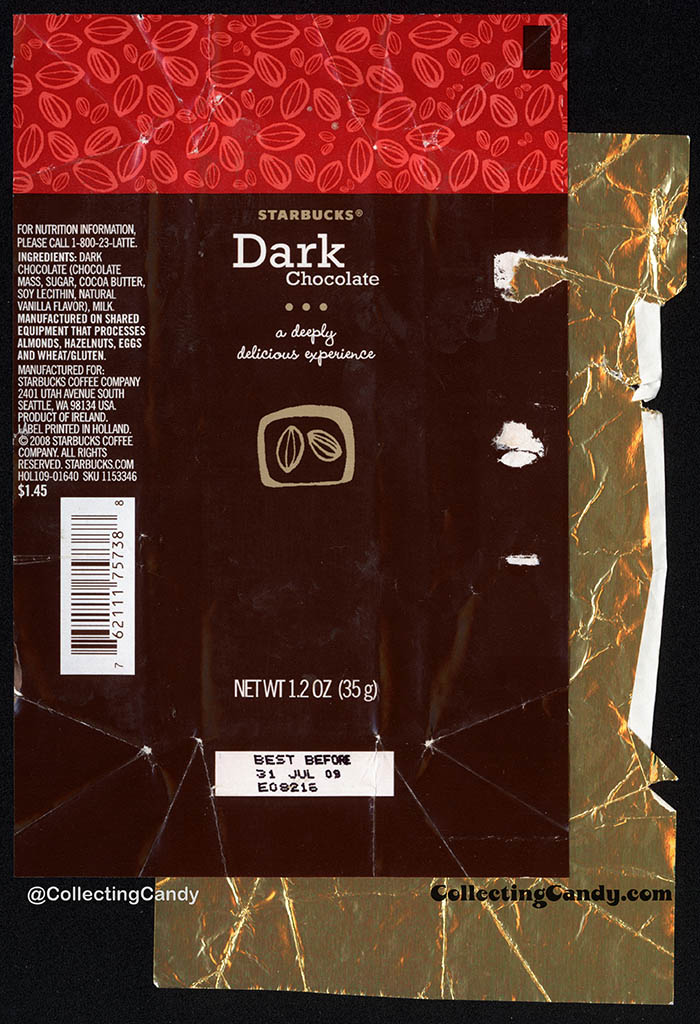 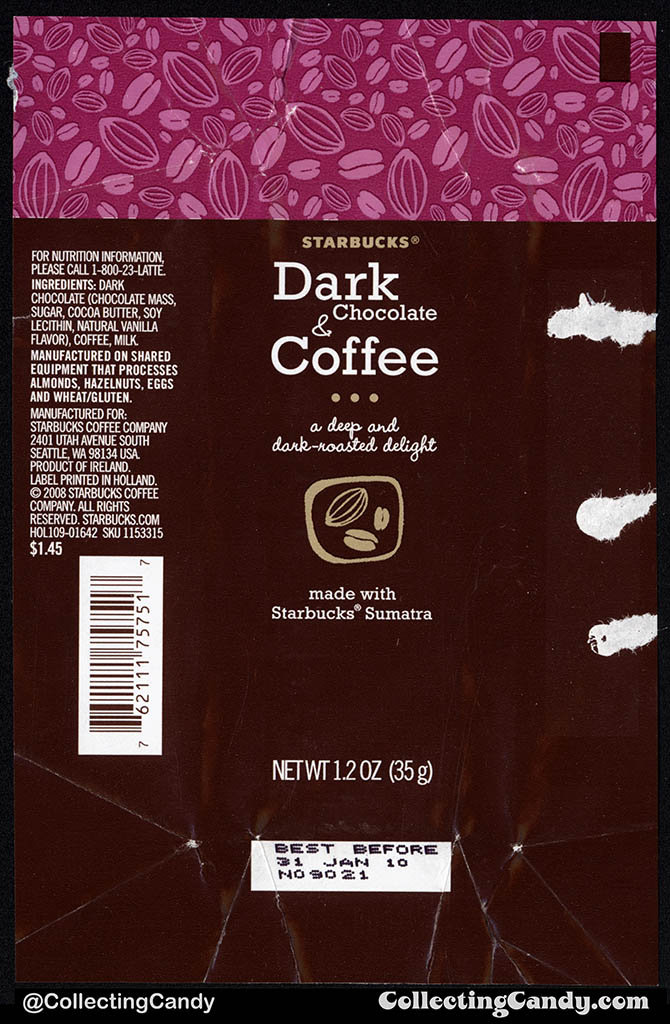 Most recently, in 2010 Starbucks offered what appears to have been a take on the coffee-infused chocolate or chocolate-covered coffee beans type of product.  These sound pretty awesome, though I missed them when they were out. 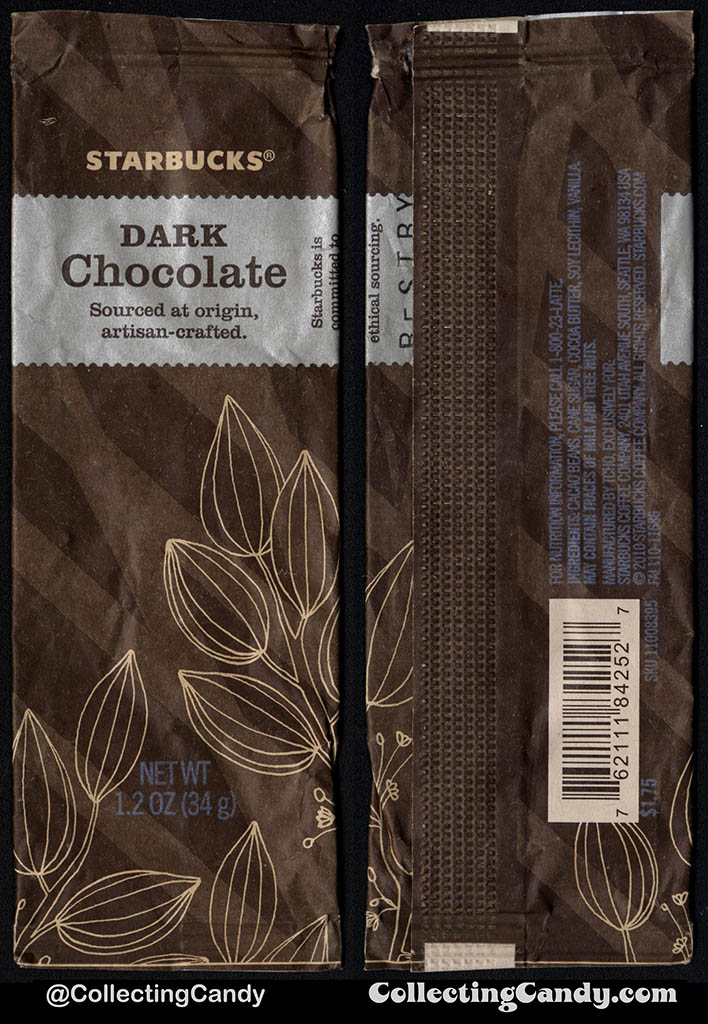 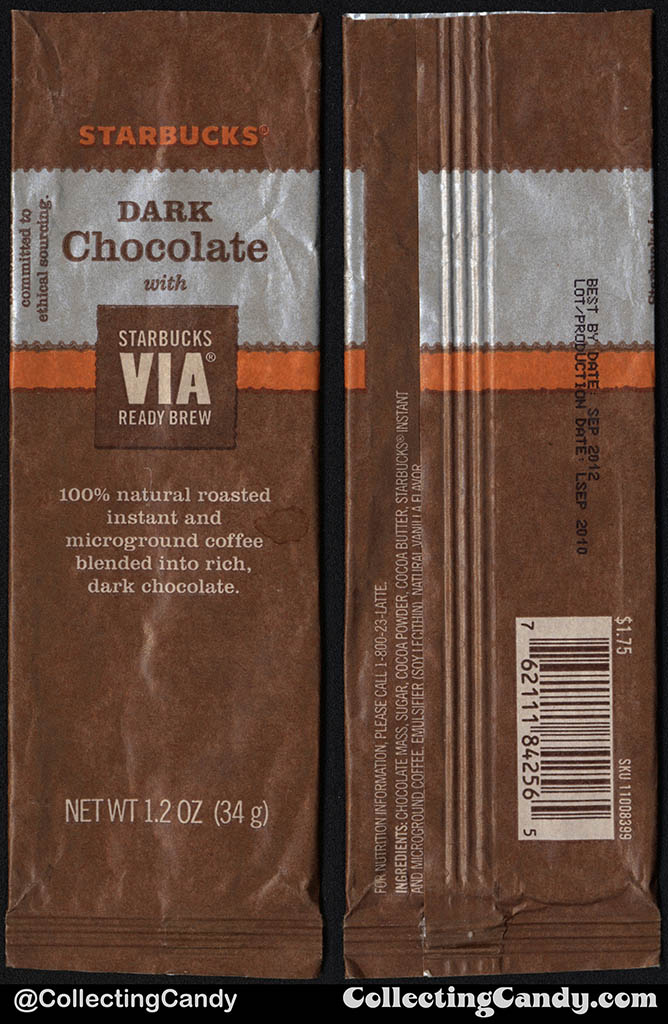 Those are the most recent offerings I’ve got to share, but they’re not all I have to present today.

Beyond the pieces I’ve already shown you, I’ve got a few pieces that defied easy dating and one that stands as a fascinating example of “what might have been”.  Let’s take a look at that one first, a package for the Starbucks-branded M&M’s that never were.

The Starbucks M&M’s pack I have would appear to be a fully-realized product, in that it is professionally printed and does not seem like any other prototypes I’ve encountered in the past.  And yet, according to the former Mars employee who shared it with me, it is just that:

The Starbucks pack is a mock-up for the custom printed M&M’s program.  Mars was trying to promote the technology by showing companies it could print their logos on the candy.  I remember there were some really tasty coffee M&M’s made in R&D for that pack.  It wasn’t an item that was actually produced or sold. 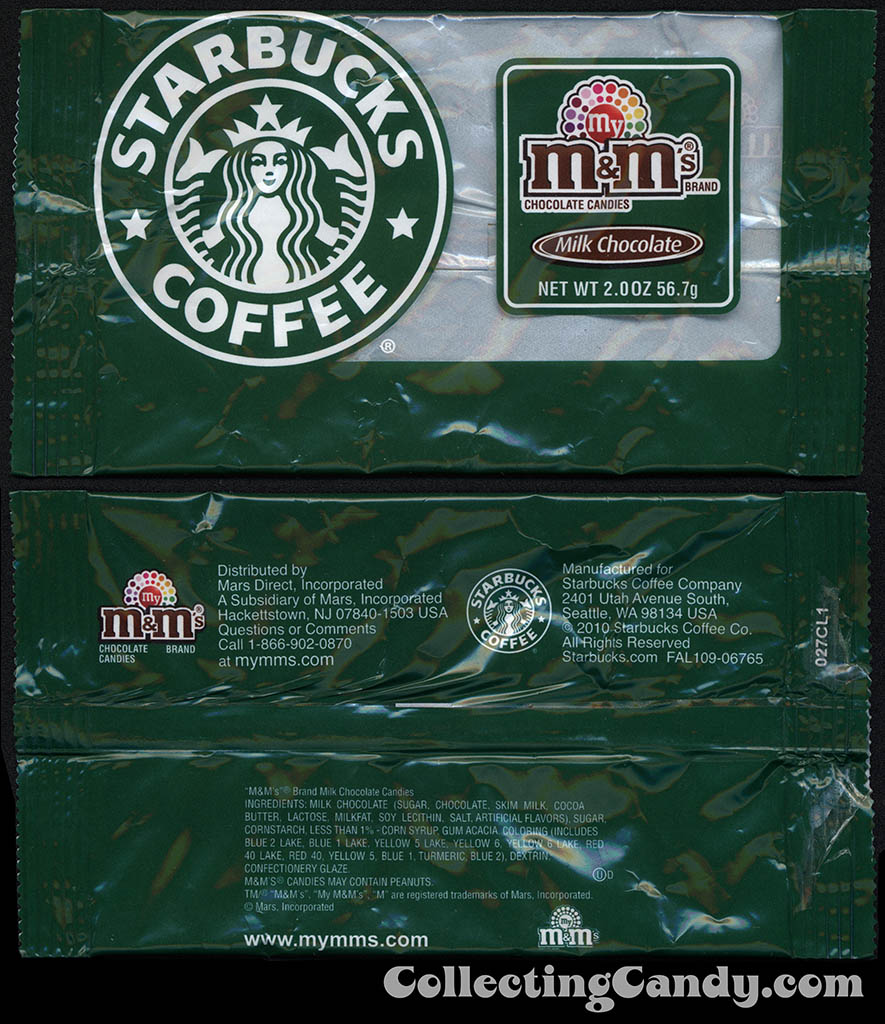 Coffee-flavored, Starbucks-branded M&M’s!  How cool is that?  I have to imagine these would have been big sellers.

Next up are a pair of foil wrappers for Starbucks Double-Shot branded chocolates produced by renowned Seattle confectionery institution, Fran’s Chocolates.   I believe it is possible that these date back to the early 1990’s and might be the earliest pieces contained in today’s post (they feature a different zip code than all the rest), but I currently have no way to be sure as they have not dates on them. 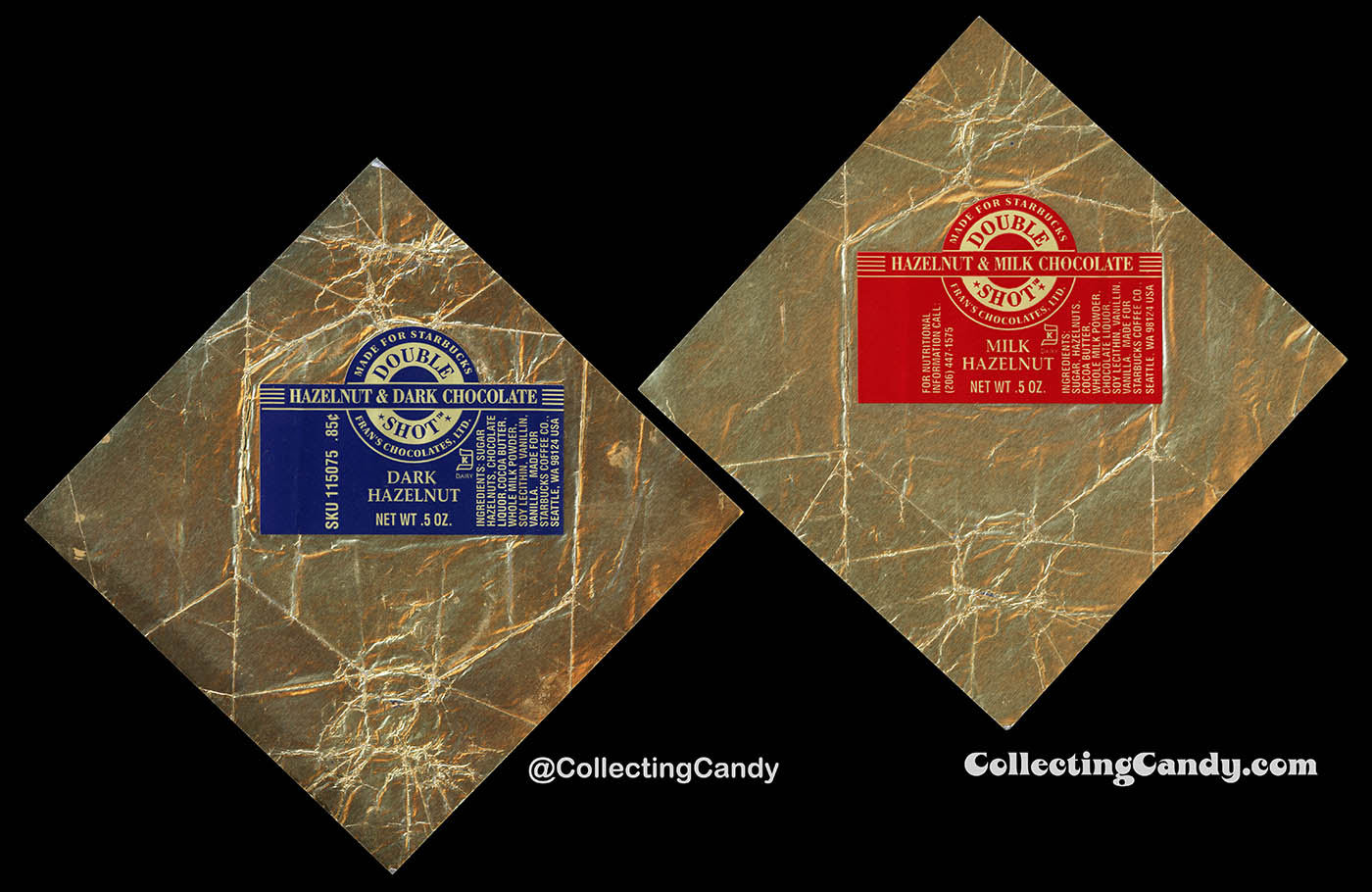 The last bit of Starbucks confectionery packaging I have to share is a bit different, because it isn’t for a chocolate-based product.  Instead, it appears that these wrappers actually clothed some kind of hard candy.  Featuring French/English bilingual text, these likely originated at a Canadian Starbucks.  Once again, these lack any kind of date, so where they fall in the Starbucks confectionery timeline is unclear.  What is clear is that they feature fun little mascots and I think they’re pretty awesome: 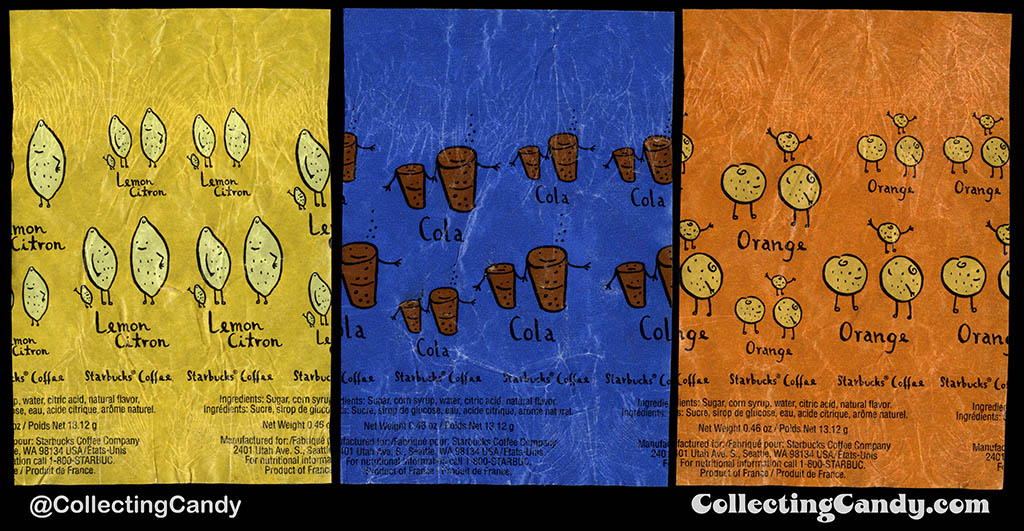 Finally, the last pieces I’ll be presenting today are not connected to Starbucks at all, but rather one of their competitors.  Still, I thought they would be appropriate to include.   Here are two chocolate bar wrappers for bars branded and sold by The Coffee Bean. 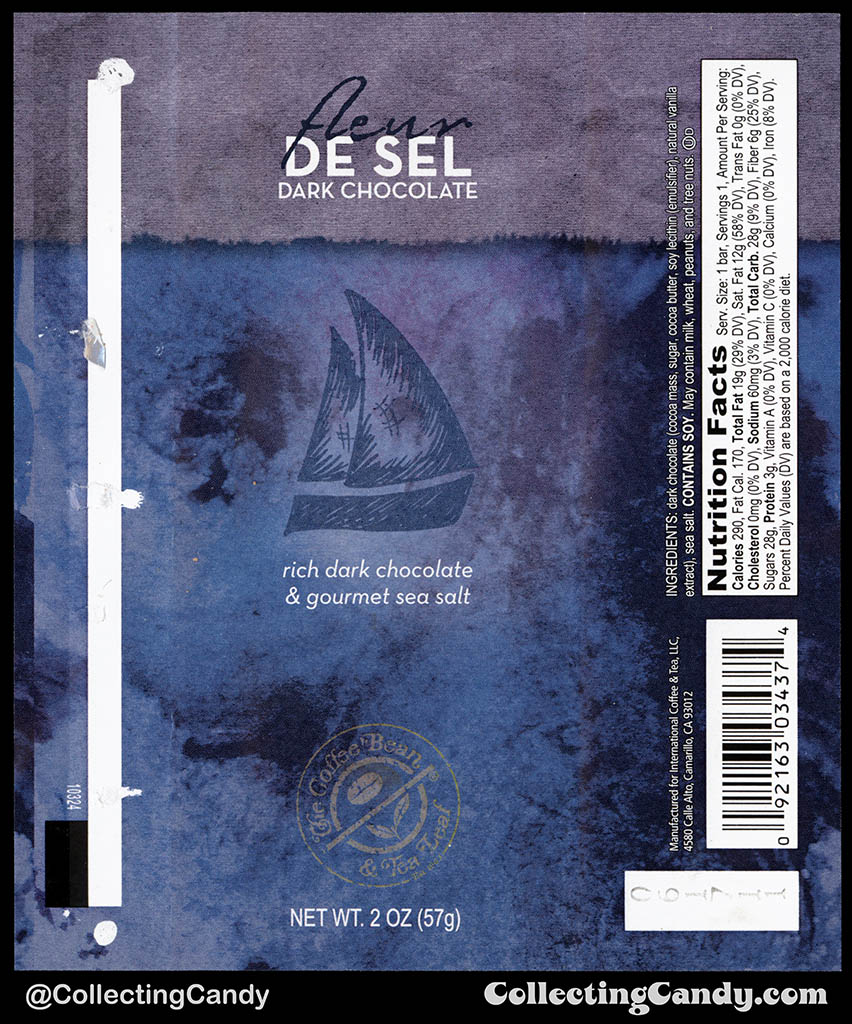 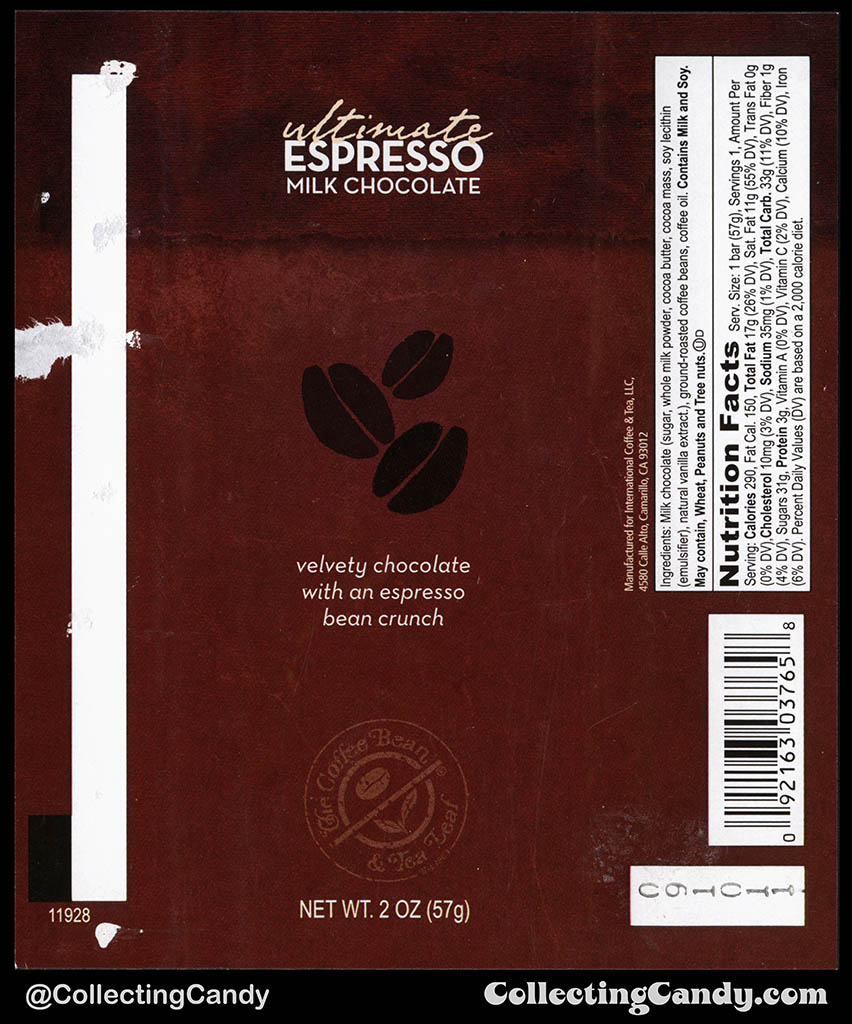 Coffee and confection will always be closely linked, and they’re a great match as I hope today’s post has shown.  So beyond everything that’s come before, I think we can count on a steady stream of collaborations and crossovers between the two flavorful worlds of coffee and confection for years to come.

And that’s everything I’ve got to share on the confectionery history of Starbucks Coffee.  I hope you enjoyed it and I’ll see you next time!

A New York City based writer, editor and sometimes actor. After spending much of the 1990′s in the comic book business helping tell the stories of Marvel Comics’ X-Men as series editor, he has since split his time between developing his own entertainment properties while still consulting and working on others. Having been described as “the Indiana Jones of lost and forgotten candy”, Jason is one of the country’s premier candy collectors and historians with his discoveries appearing in countless blogs, magazines, newspaper articles, and books. Always happy to share his knowledge and unique perspectives on this colorful part of our popular culture, Jason has consulted with New York’s Museum of Food and Drink and has also been a featured guest on Food Network’s Heavyweights, France’s M6 Capital, and New York’s TheActionRoom.com. My Google Profile+
View all posts by Jason Liebig →
This entry was posted in 1990's, Chocolate, M&M's and tagged candy collecting, candy collection, candy collector, candy wrapper collection, candy wrapper collector, Coffee, collectible, collecting candy, confectionery, confections, packaging, packaging design, Seattle, Starbucks, sweets, vintage candy wrappers, wrapper. Bookmark the permalink.