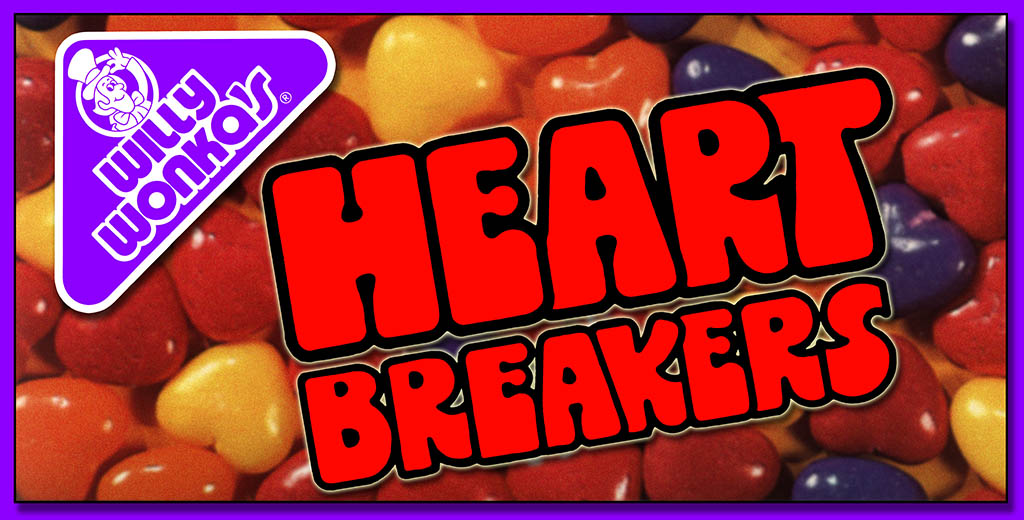 With Valentine’s Day arriving tomorrow, I thought it was the perfect time to dig into the history of a seasonal spin-off that has become a holiday classic: Willy Wonka’s (Gobstopper) Heartbreakers!  Make the jump to check it out.

Heartbreakers candies are heart-shaped jawbreakers with layers of changing colors and flavors, and these days they’re actually sub-branded as Gobstoppers Heartbreakers, but that wasn’t always the case.  For the first few years of their existence, they were simply Willy Wonka’s Heartbreakers.

I’ve always enjoyed Heartbreakers as the smaller flatter size just made them an easier-to-consume form of jawbreaker.

[Note:  Early on, Heartbreakers were identified with two-words; Heart Breakers.  But recently they appear to be known by the conjoined Heartbreakers.  For the purpose of today’s post I will be using the modern, single-word form.  It just seems to flow better.]

According to my research, Willy Wonka’s Heartbreakers were first offered nationwide in 1983, but that followed initial test markets in 1981 and 1982.  I’m fortunate to have an example of one of the early prototype/test/concept boxes in my archives from that 1981 run and here it is: 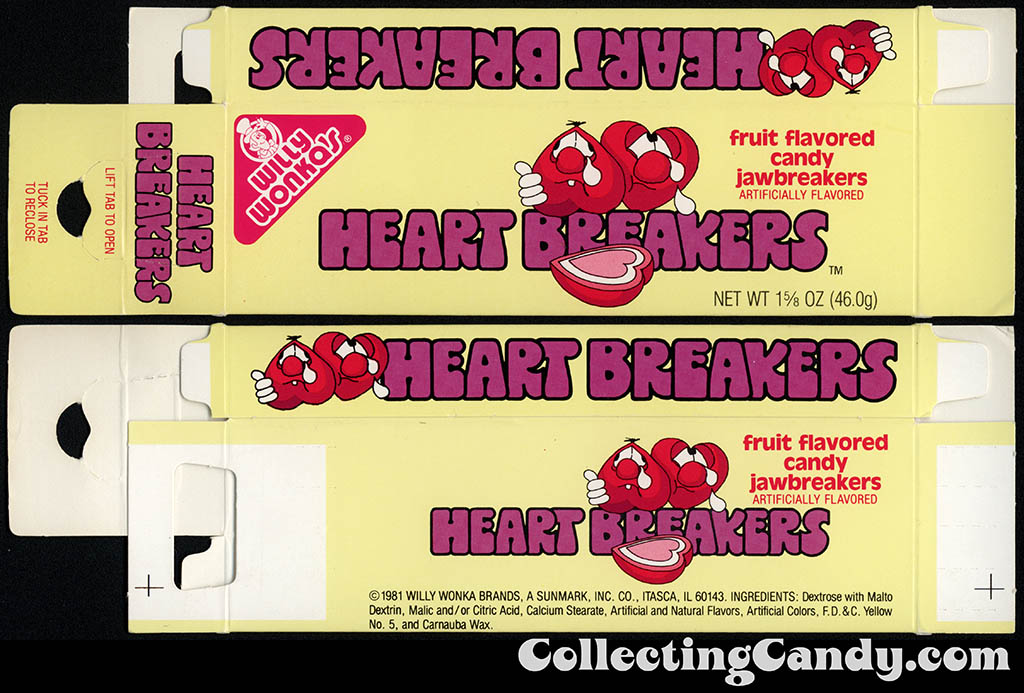 The test box differentiates itself from the production version in a number of ways, which I will point out further down.

The production packaging used during the 1983 launch still sports the 1981 copyright date, but that shouldn’t be confused for being on sale before the 1983 launch year.  Willy Wonka Brands announced the official 1983 Valentine’s roll-out for Heartbreakers to the trade with a colorful sales brochure: 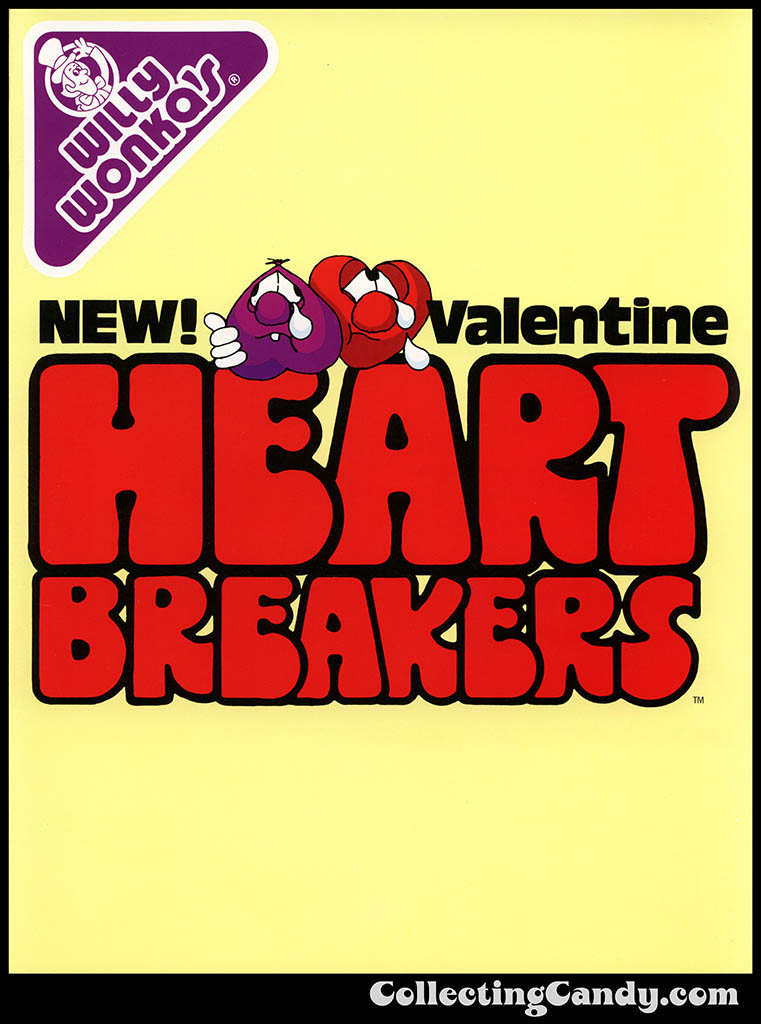 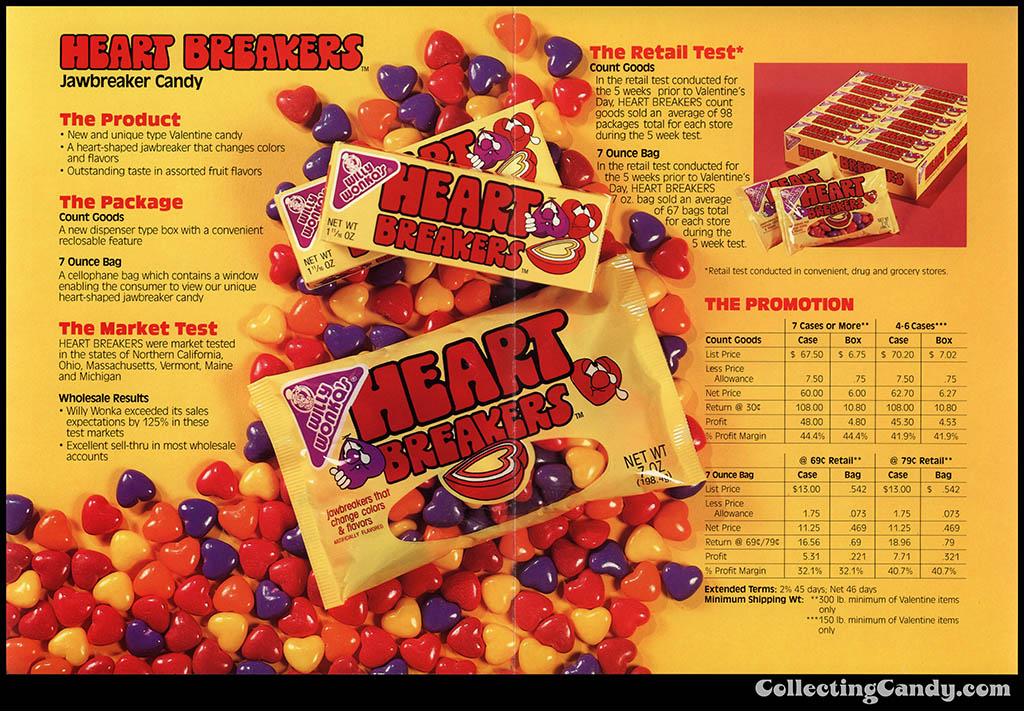 In a great bit of historical documentation, the sales brochure points out that the test-markets for Heartbreakers took place in the states of “Northern California, Ohio, Massachusetts, Vermont, Maine, and Michigan”. 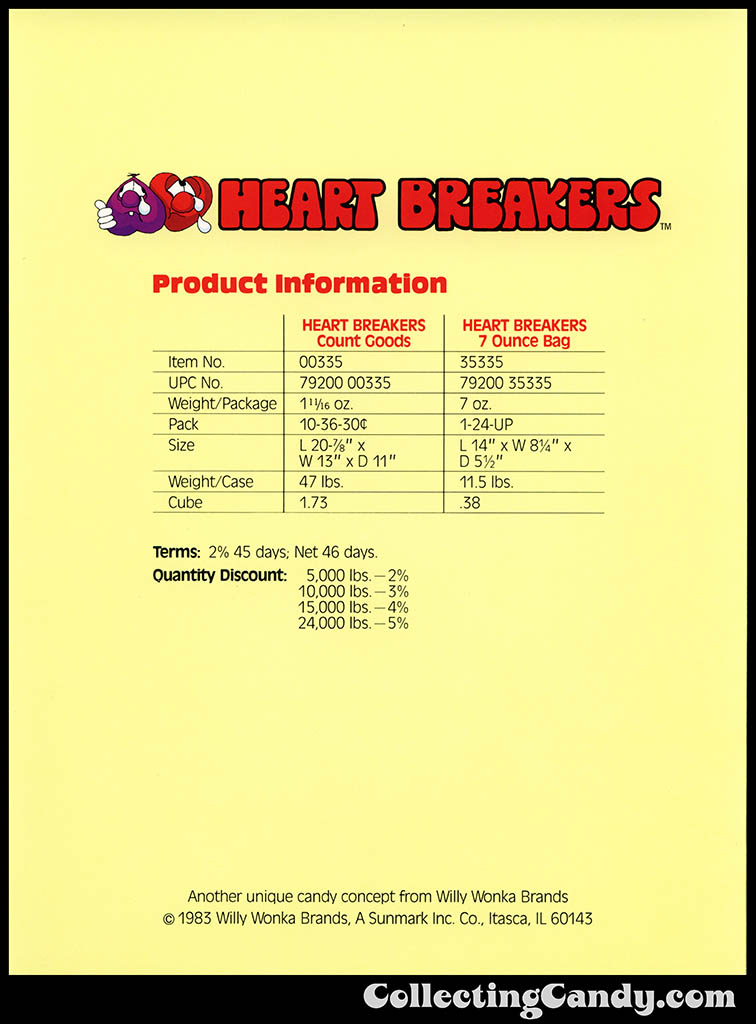 That brochure includes a great look at the packaging design found on those 1983 launch boxes: 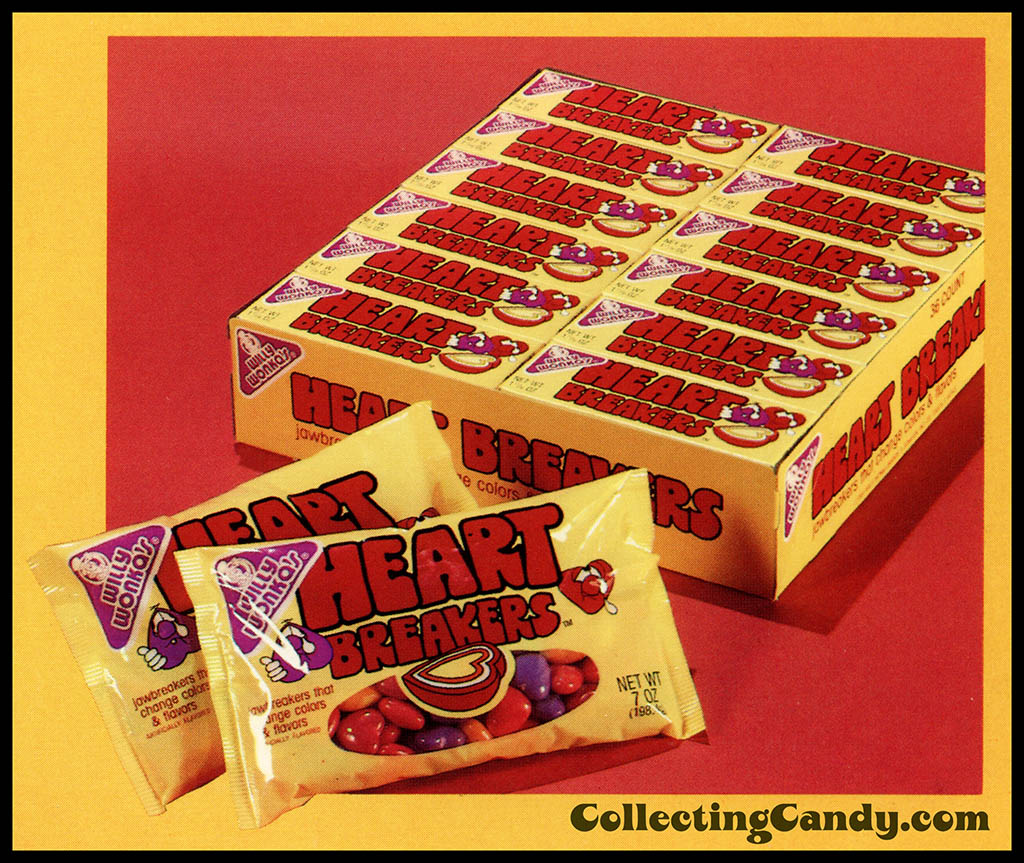 Here is an example of one of those first production boxes, along with an early run 7 ounce bag: 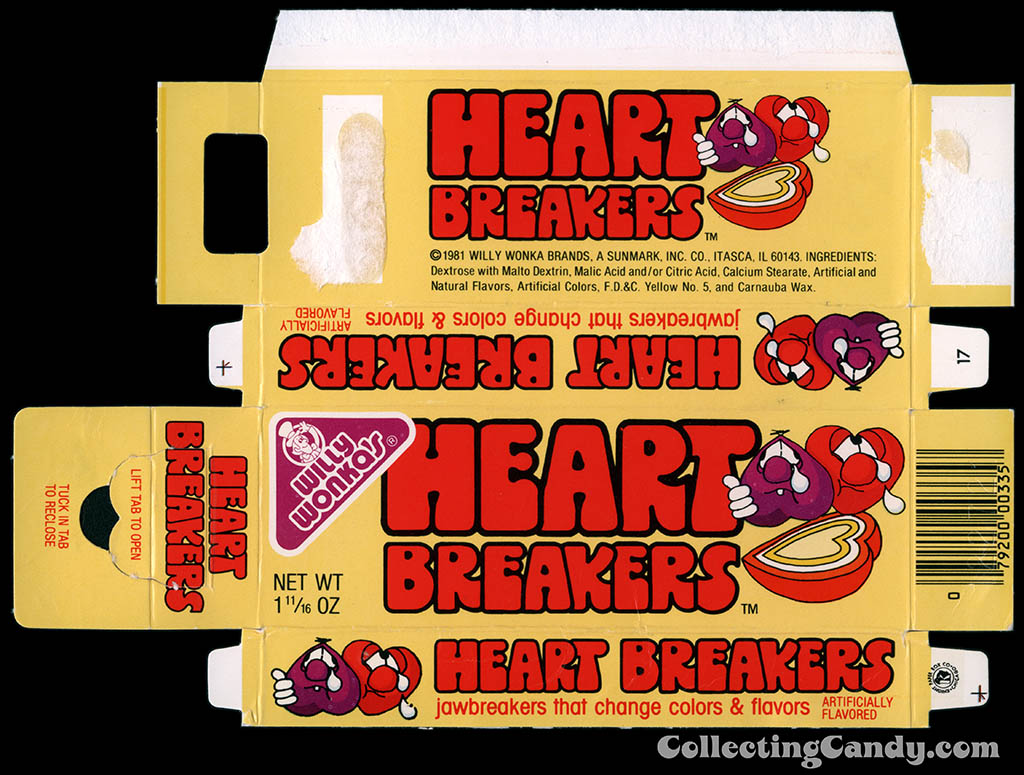 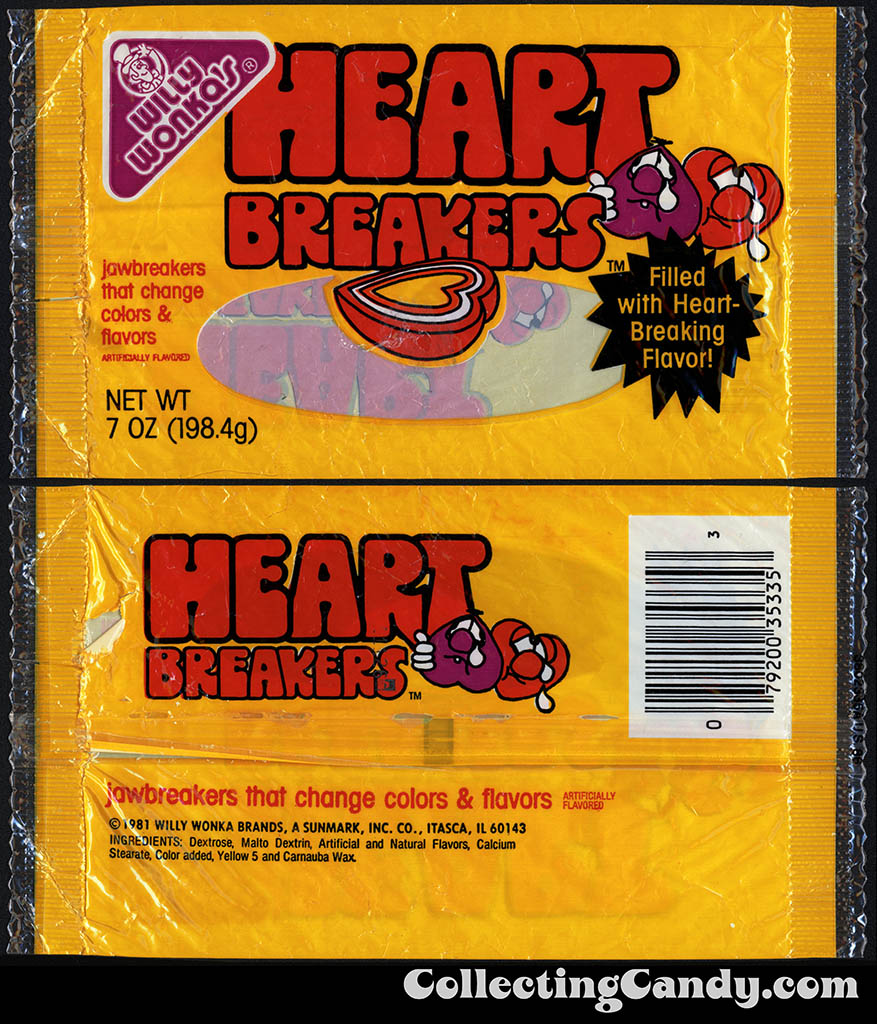 And for a better look at the contrast between the test box and the initial production package, here’s a side-by-side look:

Willy Wonka’s Heartbreakers would continue to be available during the Valentine’s season throughout the remainder of the 1980’s, even making their way into the vending trade.  Here are a pair of Heartbreakers vending machine insert cards, one from the late 1980’s and one from the early 1990’s. 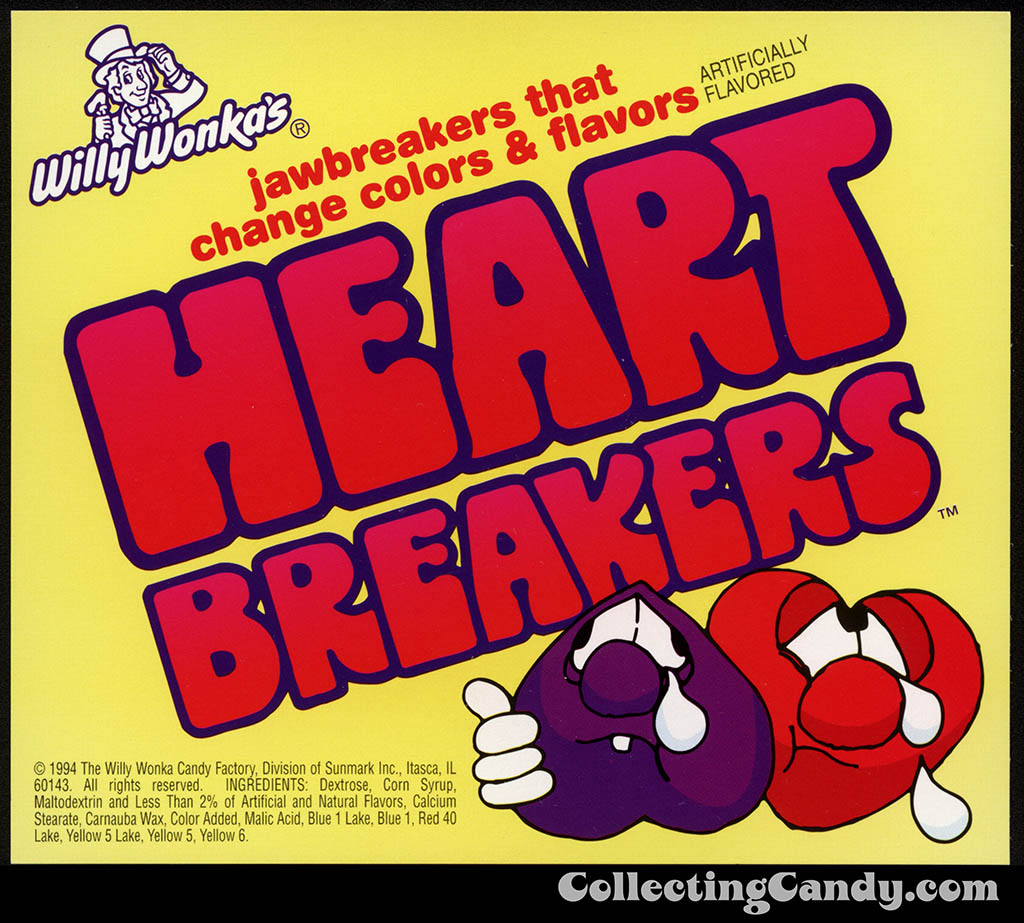 Sometime in the early 1990’s, there was a decision to re-brand Heartbreakers as a part of the Gobstoppers family, which only makes sense I think.  Here’s an early example of a Willy Wonka’s Gobstopper Heartbreakers box I’ve got from 1993 – though I believe there were earlier versions in 1991 or 1992 :

The re-branded Gobstopper Heartbreakers would of course continue along, and another variation is found on this piece of mid-to-late-1990’s promotional sales stationery: 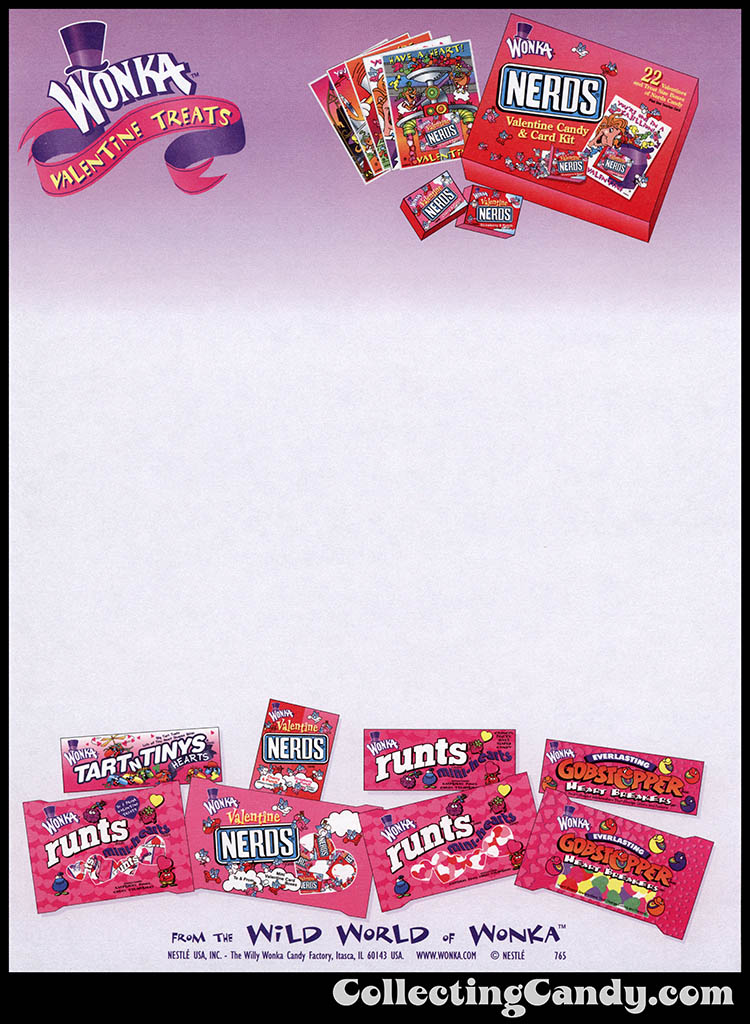 A few years later, the boxed Gobstopper Heartbreakers would undergo another evolution: 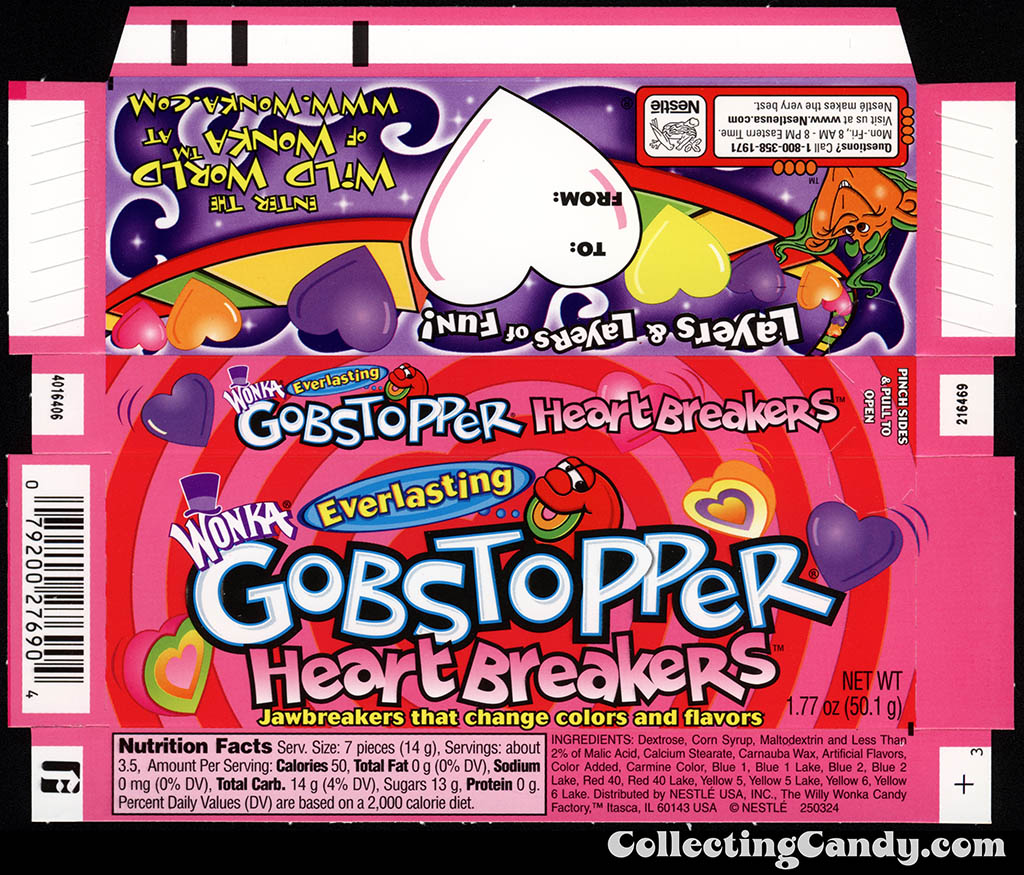 That style of Gobstopper Heartbreakers appears to have been the last style available in box form.  After the last major line-wide Wonka redesign I’ve only ever found them offered in the larger, 12oz bags. 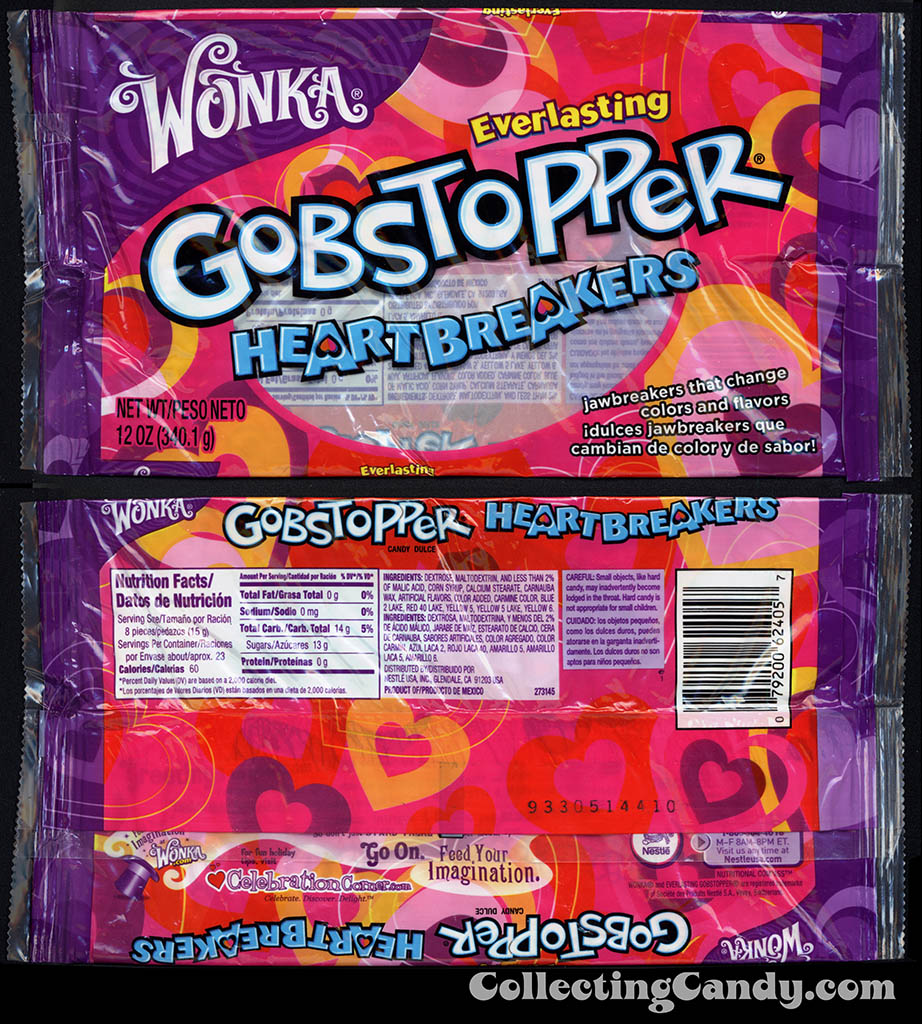 For 2015, the package changed it up to include the front-of-pack calorie informatoin, and also altered its color scheme slightly:

And finally, for Valentine’s season this year, Gobstopper Heartbreakers joined the rest of the Wonka lineup in become non-Wonka branded products that also highlight their new status as containing “No Artificial Flavors”, as you can see here: 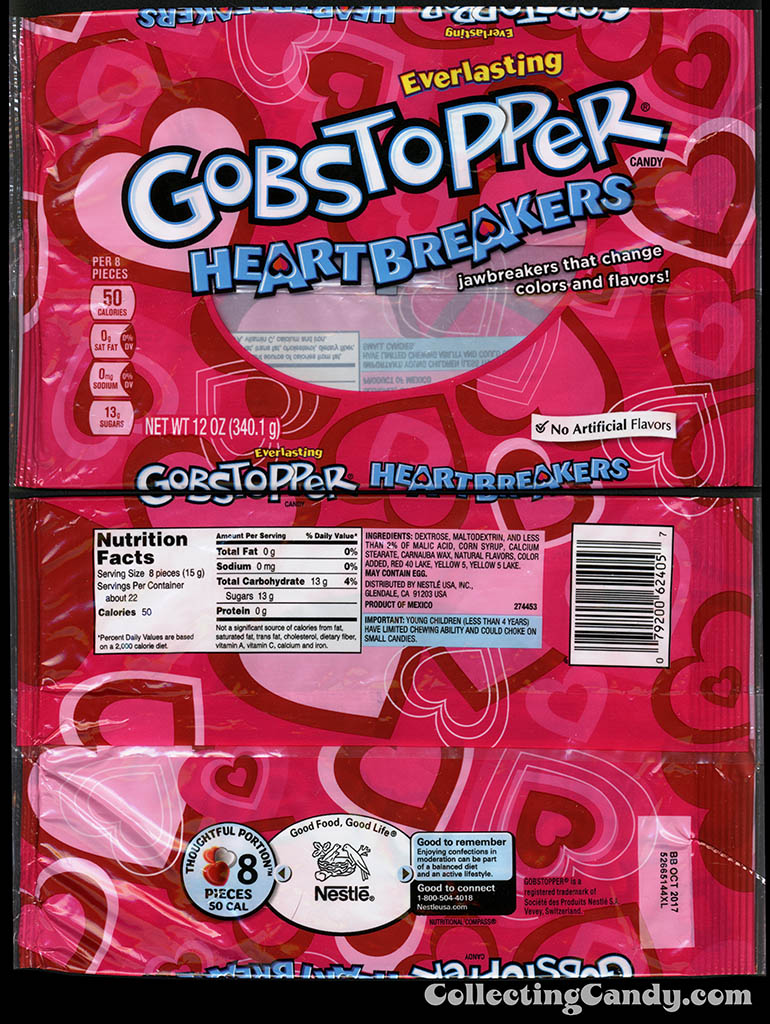 And that concludes this history and brings us up to the most recent iteration of  Gobstopper Heartbreakers.

Happy Valentine’s Day, everyone.  See you next time!

A New York City based writer, editor and sometimes actor. After spending much of the 1990′s in the comic book business helping tell the stories of Marvel Comics’ X-Men as series editor, he has since split his time between developing his own entertainment properties while still consulting and working on others. Having been described as “the Indiana Jones of lost and forgotten candy”, Jason is one of the country’s premier candy collectors and historians with his discoveries appearing in countless blogs, magazines, newspaper articles, and books. Always happy to share his knowledge and unique perspectives on this colorful part of our popular culture, Jason has consulted with New York’s Museum of Food and Drink and has also been a featured guest on Food Network’s Heavyweights, France’s M6 Capital, and New York’s TheActionRoom.com. My Google Profile+
View all posts by Jason Liebig →
This entry was posted in 1980's, 1990's, Boxed, Hard Candy, Holiday, Nestle, Wonka and tagged candy collecting, candy collection, candy collector, candy wrapper collection, candy wrapper collector, collectible, collecting candy, confectionery, confections, holiday, packaging, packaging design, seasonal, sweets, Valentine, Valentine's Day, vintage candy wrappers, Wonka, wrapper. Bookmark the permalink.