Nestle-Wonka introduced their Randoms gummies product to the USA marketplace early last year.  The concept was simple and appealing: the shapes and assortment of the gummy candies in each package would be “random” creating an “endless gummy variety”.   If you’ve tried them, you’ve probably noted the truth in that claim – there really are a quite a variety of gummy shapes you can find in a package of  Wonka Randoms.

But what you may not have noticed is that Wonka decided to have a little extra fun with this “endless variety” concept, because instead of a single package design, they’ve released a variety.   Each version of Wonka Randoms packages features images of different gummy candies on it.  Make the jump to check them out!

As a candy packaging historian/fan/pundit/collector, I spend a lot of time looking at the candy shelves.  When something is new, it tends to jump out at me.  I also tend to notice small changes on packages, but I’ll admit that it was weeks before I realized that Wonka had created multiple different Randoms packages.   When I finally did wake up to this subtle bit of packaging design fun, I thought it was great.   Because more than just creating some variety on the shelves, the different packages support the larger “Randoms” product concept.  Genius!

I’ve got a range of different sizes of Randoms packs that I’ve picked up, showing that Wonka committed to the variety of packages in at least three different retails sizes.  From what I’ve been able to tell, each retail size received four unique packaging designs.  First up are the 4oz smaller shelf pack size: 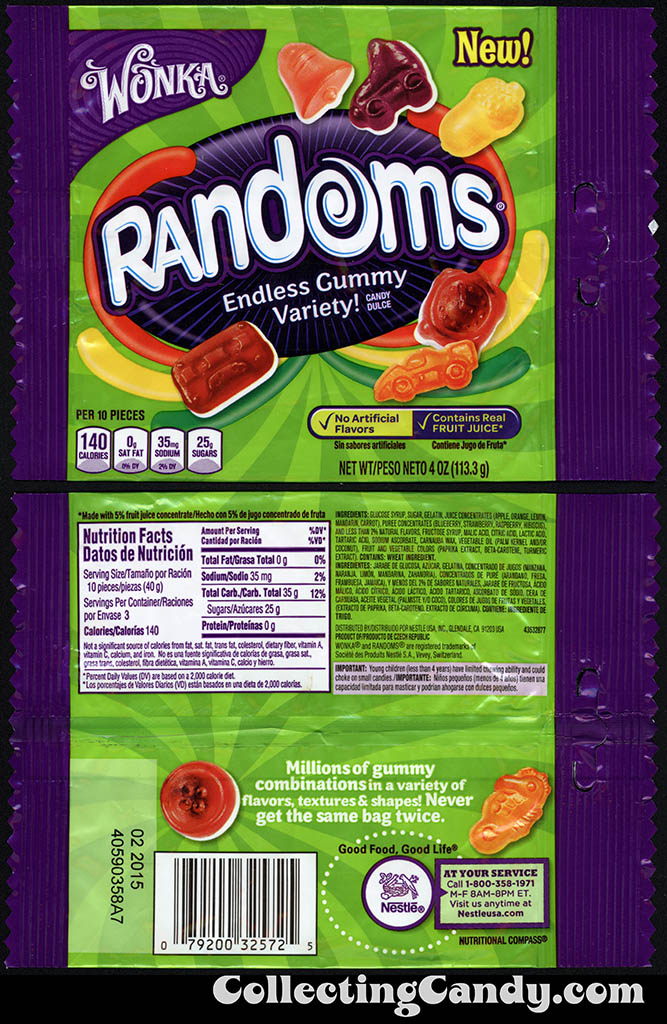 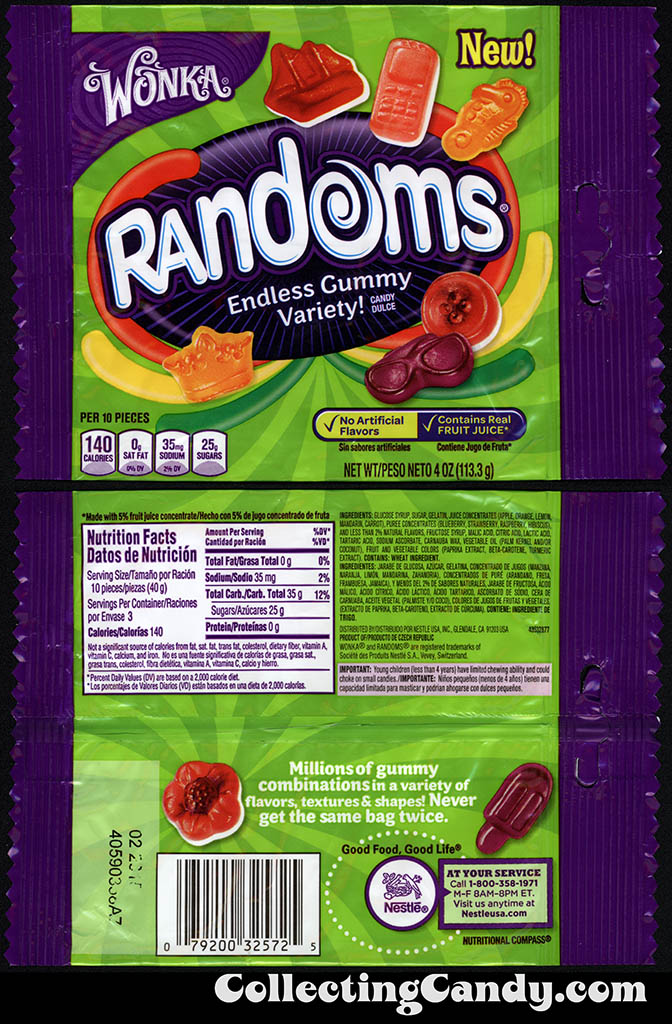 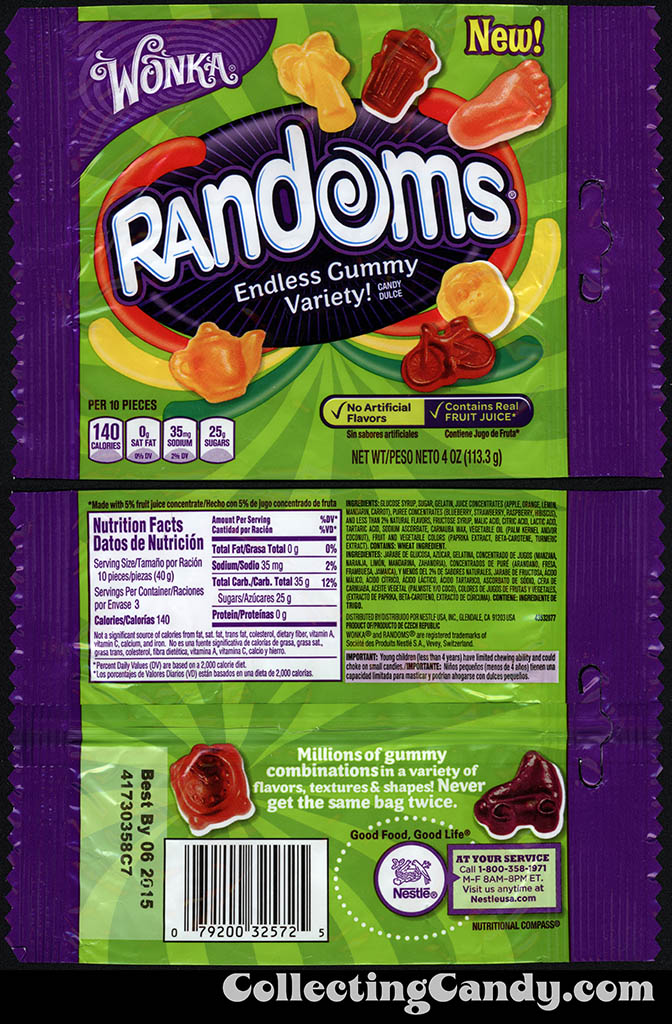 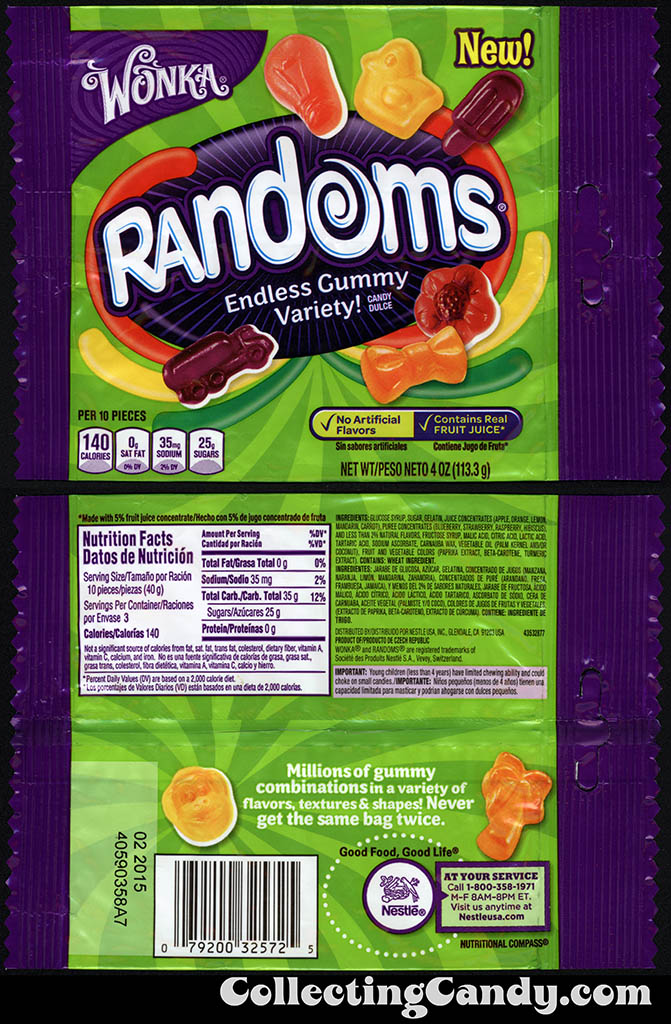 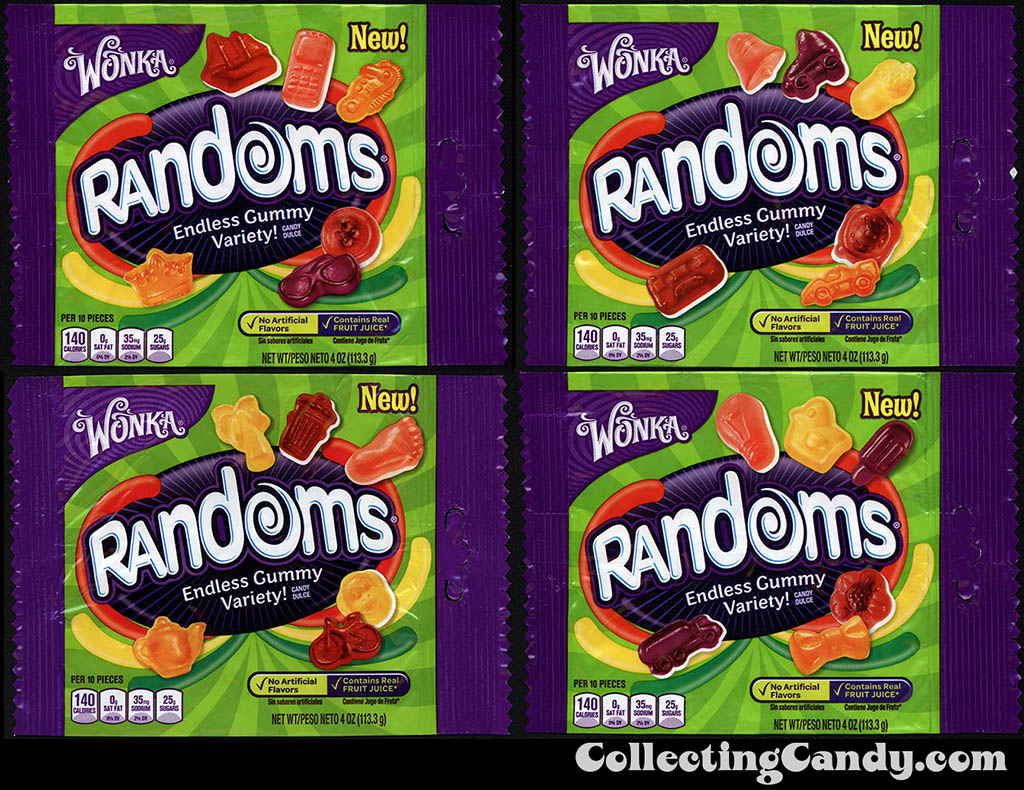 As I indicated, the variety of package graphics for Wonka Randoms was not limited to just the 4oz packs.  Here are the four variations of 5.25 oz peg bag packages I was able to bring together: 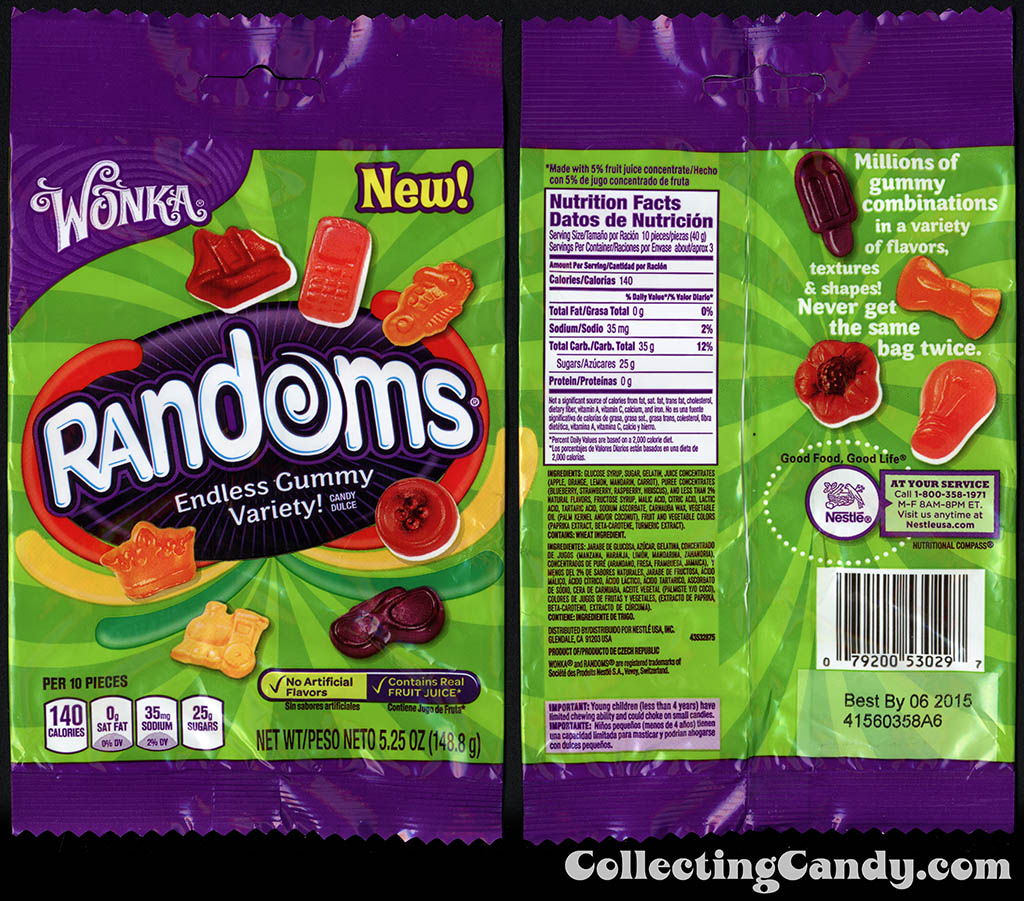 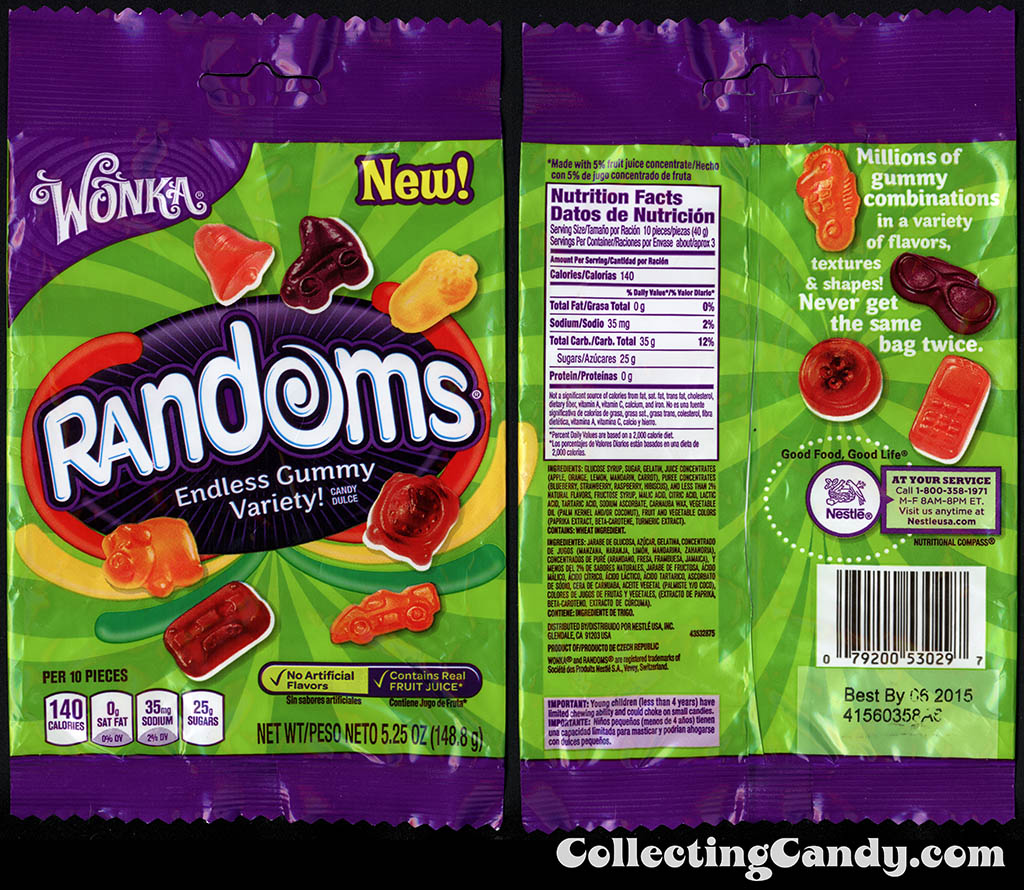 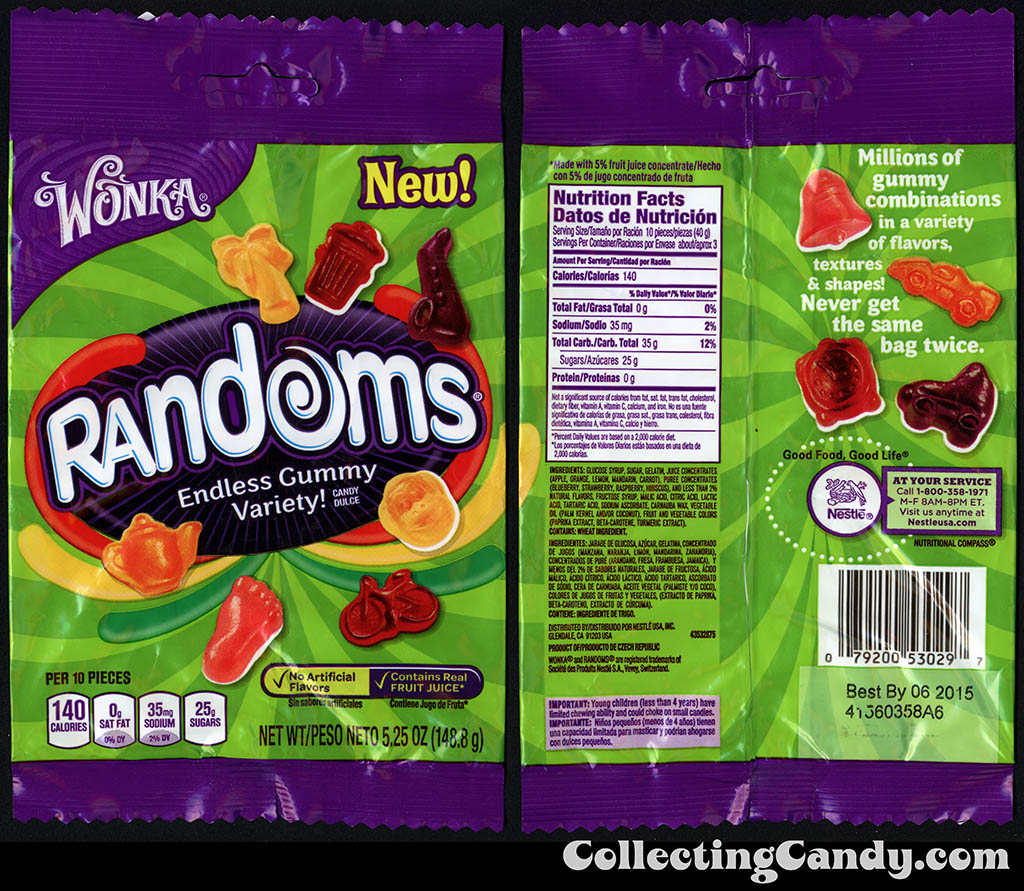 Finally, I’ve got a pair of the 10oz Randoms packages to show.   Though I only picked up two of the 10oz packs, my assumption is that they also received four unique versions.  I’ll have to double check the next time I’m out and find them at this size: 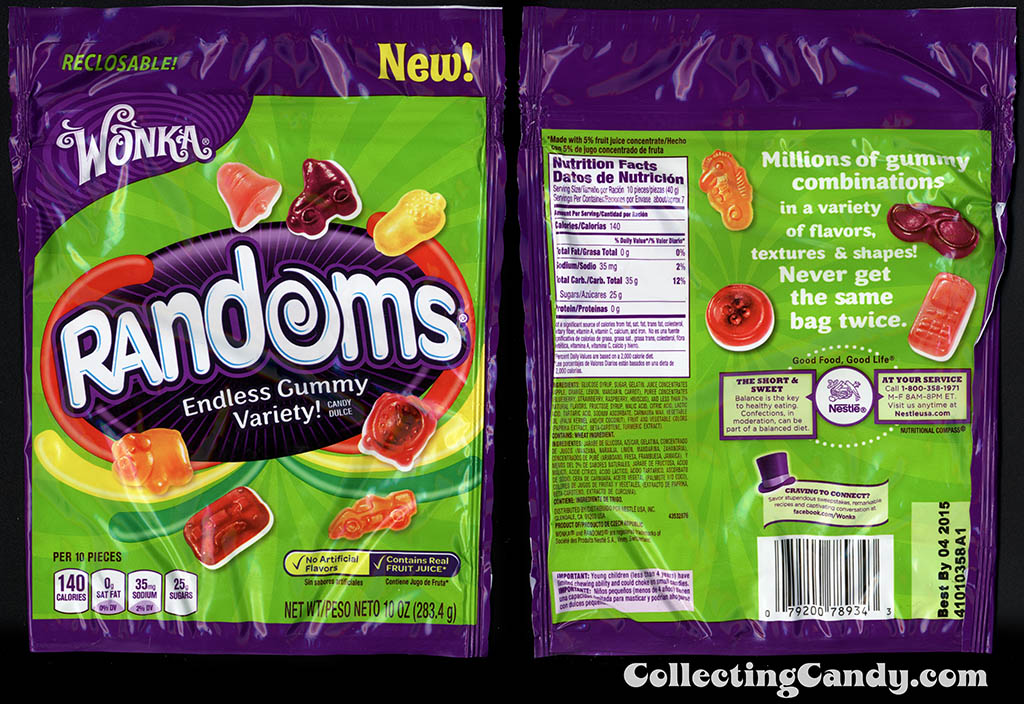 That’s all of the packs that I’ve picked up so far.  I think it’s great that they’ve opted to do something a little extra with their Randoms packaging that most people (myself included) might not ever notice.   It shows a real enthusiasm for the concept behind the brand.   It also makes me wonder if they’ll continue with the concept on future packages, giving me whole new sets of variations to hunt for?

I should note that Nestle has also released the Randoms concept under their Rowntree brand in the United Kingdom.  I don’t have any of the regular Rowntree Randoms packs but I do have a Halloween seasonal “Spooky” release package, which I included during our Countdown To Halloween back in October.

Now that I think of it, I’m going to have to ask Liz and Jonny at CollectingCandy.com’s UK field office to work on wrangling up some standard Rowntree Randoms packs, so I can see if they’re also doing a variety of package versions over there. 🙂

For now though, that’s everything I’ve got to share on the remarkable array of wrappers for Wonka’s Randoms!  See you next time!

A New York City based writer, editor and sometimes actor. After spending much of the 1990′s in the comic book business helping tell the stories of Marvel Comics’ X-Men as series editor, he has since split his time between developing his own entertainment properties while still consulting and working on others. Having been described as “the Indiana Jones of lost and forgotten candy”, Jason is one of the country’s premier candy collectors and historians with his discoveries appearing in countless blogs, magazines, newspaper articles, and books. Always happy to share his knowledge and unique perspectives on this colorful part of our popular culture, Jason has consulted with New York’s Museum of Food and Drink and has also been a featured guest on Food Network’s Heavyweights, France’s M6 Capital, and New York’s TheActionRoom.com. My Google Profile+
View all posts by Jason Liebig →
This entry was posted in Gummies, Nestle, Wonka and tagged candy collecting, candy collection, candy collector, candy wrapper collection, candy wrapper collector, collectible, collecting candy, confectionery, confections, Gummies, packaging, packaging design, sweets, vintage candy wrappers, Wonka, wrapper. Bookmark the permalink.