A Frappé For Friday – Welch’s Frappé, That Is!

Over the years, I’ve received all sorts of e-mails quizzing me about the identity of some nearly forgotten candy or requesting images of a fondly missed favorite chocolate bar.  It’s a fun challenge and incredibly satisfying when I’ve been able to provide an answer (or picture) to those inquiries.

One chocolate bar that I’ve been asked about a number of times is the Welch’s Frappé.   It’s a brand I have no personal memories of as it mostly predates me, but for those that do remember it, it clearly left a big impression.  Though it’s taken years of searching, I’ve finally assembled a historic look back at the brand which I’m excited to unveil today.  So make the jump to check out the classic Welch’s Frappé!

Though you may not be familiar with the Welch’s candy name, a few of their brands remain top-sellers, now owned by Tootsie Roll Industries:  Junior Mints, Sugar Babies, Sugar Daddy and Junior Caramels (formerly Pom Pom’s) were all originally launched under the Welch’s name.

Back in the 1930’s, Welch’s introduced a number of combination bars that would go on to be top sellers over the decades, but have since disappeared.  One of those was the Welch’s Frappé.  Welch’s Frappé was a chocolate-covered, rum-flavored concoction that included raisins among its more standard confectionery ingredients.

During my years of hunting, here’s the earliest Frappé wrapper I’ve been able to track down: 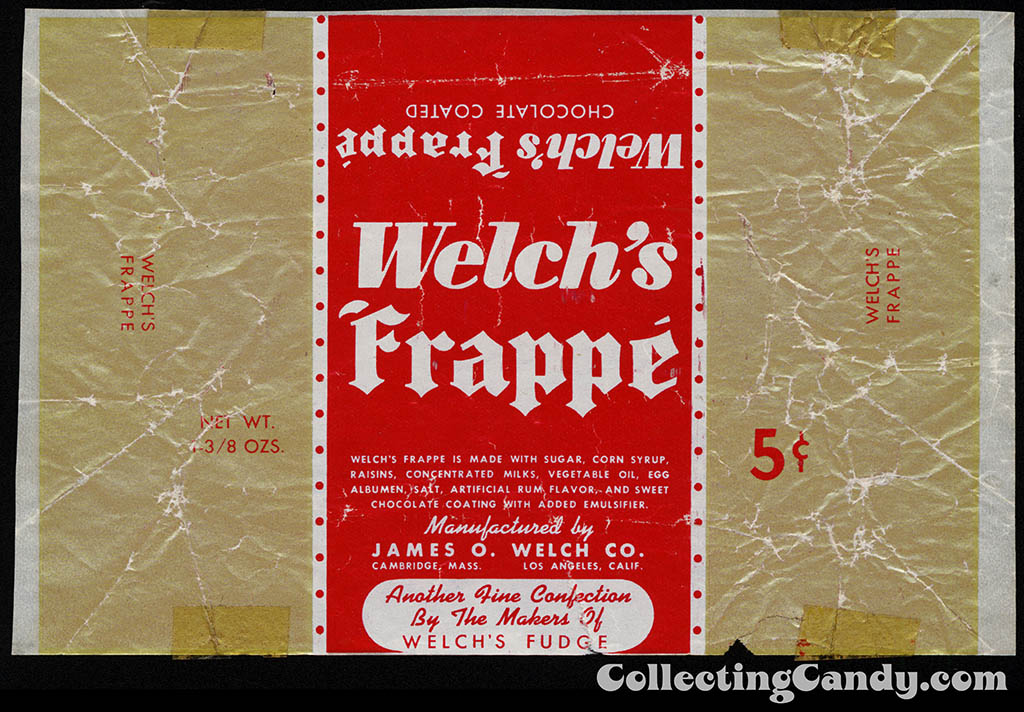 It’s great to be able to share this early version of the Frappé with its decidedly stylized logo.   While that stylized logo would change in subsequent years, the core composition and colors found on this early wrapper design would remain all the way through into the 1970’s.

In 1963, the confectionery assets of Welch’s would be acquired by the Nabisco company, resulting in a Nabisco-branded Welch’s Frappé arriving on shelves by the 1970’s.  This final Frappé wrapper I have dates to 1973 and according to my research, the bar didn’t last much longer and was soon discontinued. 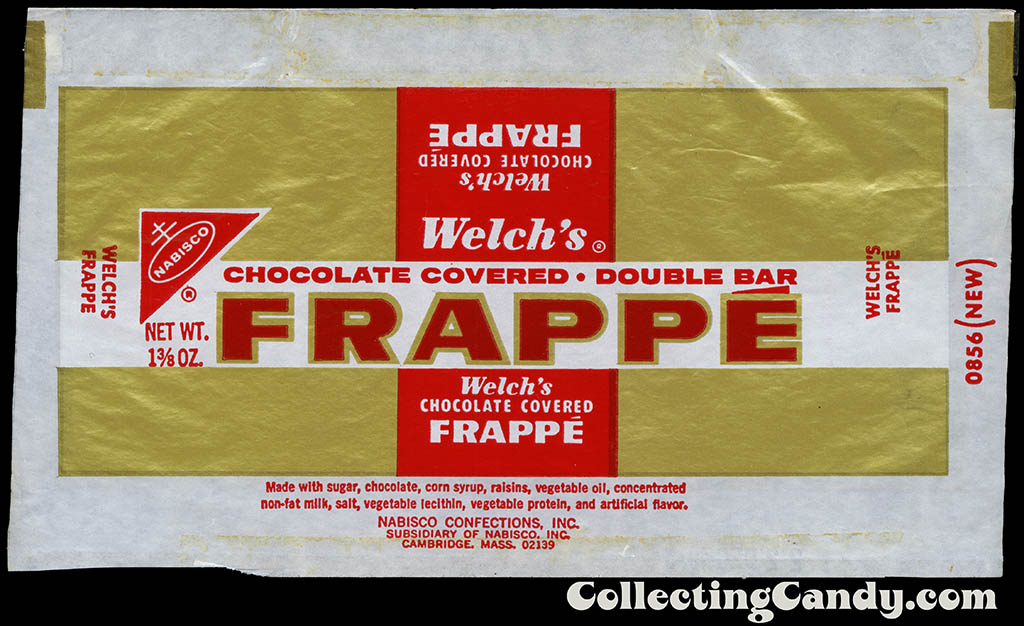 Outside of the fond memories and recollections that have been sent in to me over the years, these wrappers are all I’ve been able to track down on the specific history of Welch’s Frappé.  But if and when I learn significantly more, I’ll revisit this topic and share the Frappé-riffic news here.  Until then, I hope you’ve enjoyed the look at this fondly-remembered brand.

A New York City based writer, editor and sometimes actor. After spending much of the 1990′s in the comic book business helping tell the stories of Marvel Comics’ X-Men as series editor, he has since split his time between developing his own entertainment properties while still consulting and working on others. Having been described as “the Indiana Jones of lost and forgotten candy”, Jason is one of the country’s premier candy collectors and historians with his discoveries appearing in countless blogs, magazines, newspaper articles, and books. Always happy to share his knowledge and unique perspectives on this colorful part of our popular culture, Jason has consulted with New York’s Museum of Food and Drink and has also been a featured guest on Food Network’s Heavyweights, France’s M6 Capital, and New York’s TheActionRoom.com. My Google Profile+
View all posts by Jason Liebig →
This entry was posted in 1950's, 1960's, 1970's, Chocolate, Timeline, Uncategorized and tagged candy collecting, candy collection, candy collector, candy wrapper collection, candy wrapper collector, collectible, collecting candy, confectionery, confections, Nabisco, packaging, packaging design, raisins, sweets, vintage candy wrappers, Welch's, wrapper. Bookmark the permalink.

11 Responses to A Frappé For Friday – Welch’s Frappé, That Is!