Forty years ago the D.L. Clark company launched what was at the time, their latest version of a chocolate-coated coconut bar.  While the bar itself might not have been revolutionary, mixing the title of their flagship brand with the bar’s main ingredient provided a fun and catchy new name to pitch to consumers:  The Clarconut!

Before I get to the Clarconut, it’s important to understand that it was merely a re-branding of Clark’s earlier chocolate-coated coconut bar, billed as new to generate excitement and interest.  But they’d been making a bar that was the same, or nearly so, for decades.

I have an example of a foil Clark Coconut bar wrapper that dates back to the 1950’s, though I’ve seen even earlier versions.  Here’s mine: 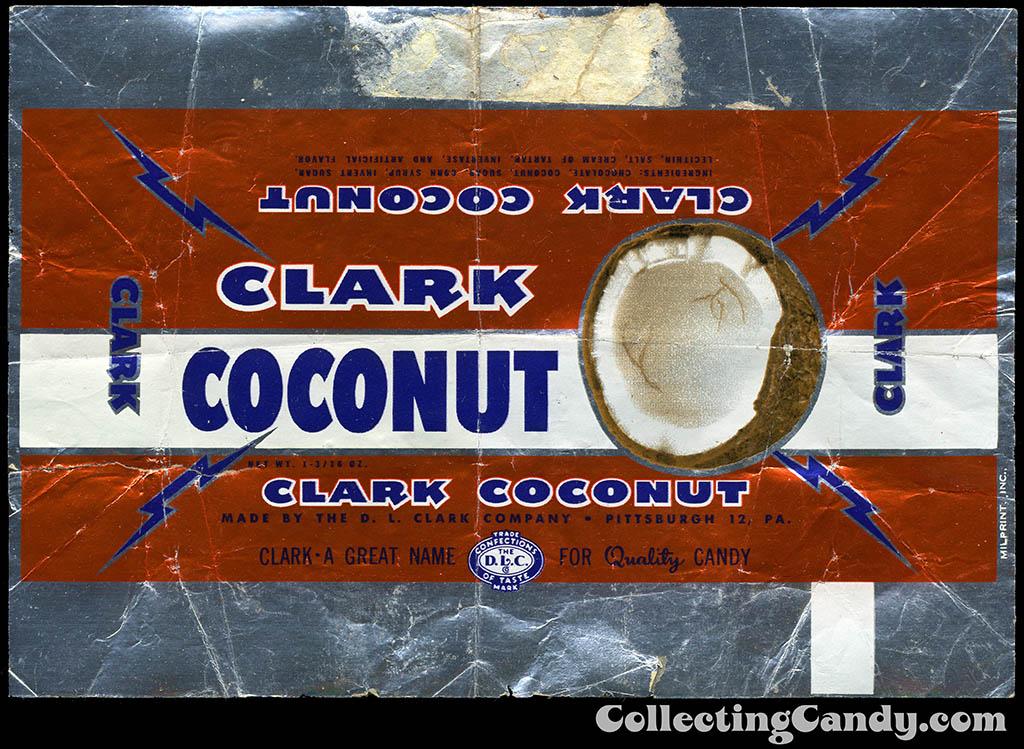 I’ve always liked this early Clark Coconut wrapper.  First, it’s printed on foil and though it’s difficult to convey the look of it via a scan, it’s quite striking in person.  Secondly, I love the classic Clark lightning bolts, a design feature I’ve appreciated on their older Zagnut wrappers as well.  Finally, there’s the large inset photo of the cracked-open coconut – I think that’s pretty awesome in the context of this one.

By the later 1960’s, the Clark Coconut bar wrapper design had been modernized and sadly lost those classic lightning bolts. 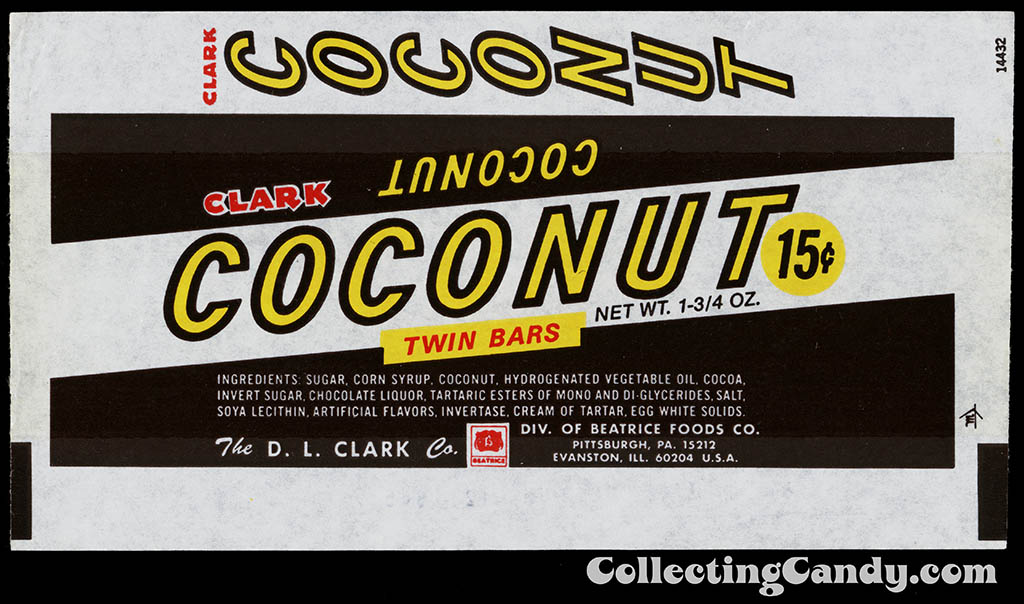 I’ve found evidence of this version of Clark Coconut from 1967 up through 1971. 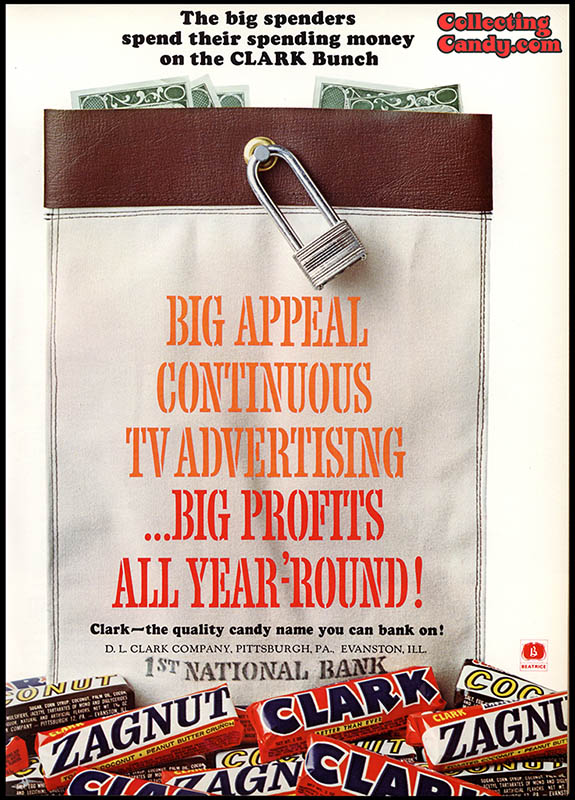 It would seem that the Clark Coconut bar, in the form it was at the time, was not selling as well as they’d have liked because in 1974 it was relaunched to great fanfare as the Clarconut.

The earliest mention of the Clarconut that I’ve found in my research dates to June of 1974.  It’s worth noting that this early trade clipping mentions the Clarconut having gone through “extensive testing” so it’s possible that it saw limited retail distribution in 1973.

By October of that year, the Clarconut rollout was in full effect.  They were even showcasing fun-size versions of the bar at trade shows: 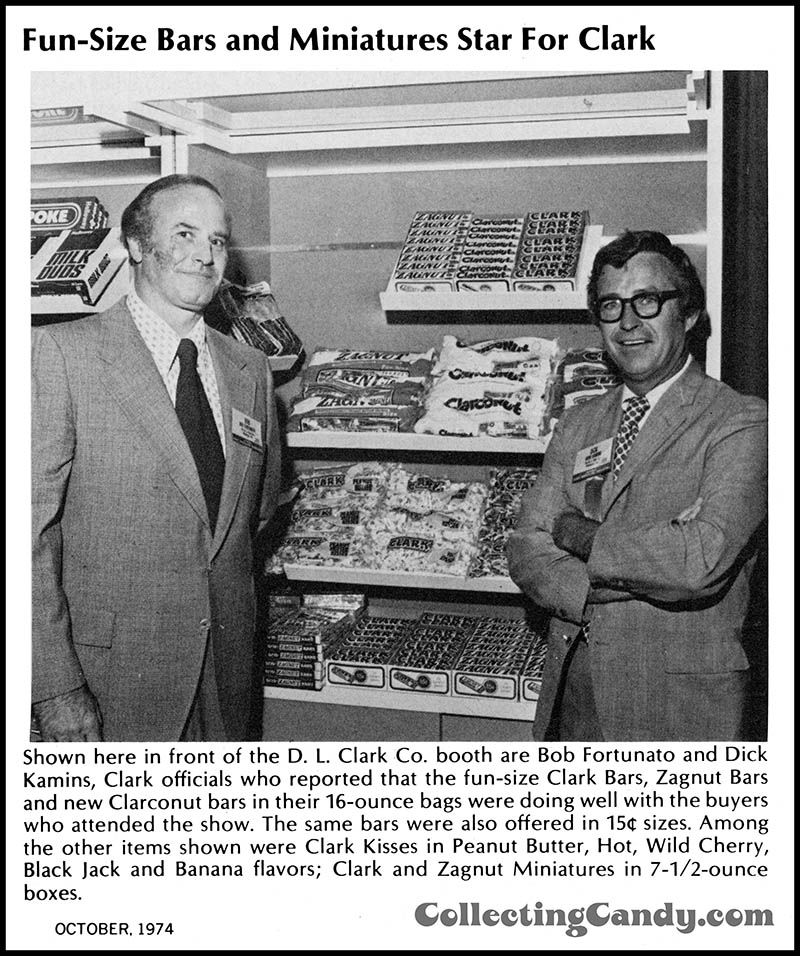 Here is the full-page ad that Clark took out in the trades, promoting the launch of their “great new” Clarconut bar: 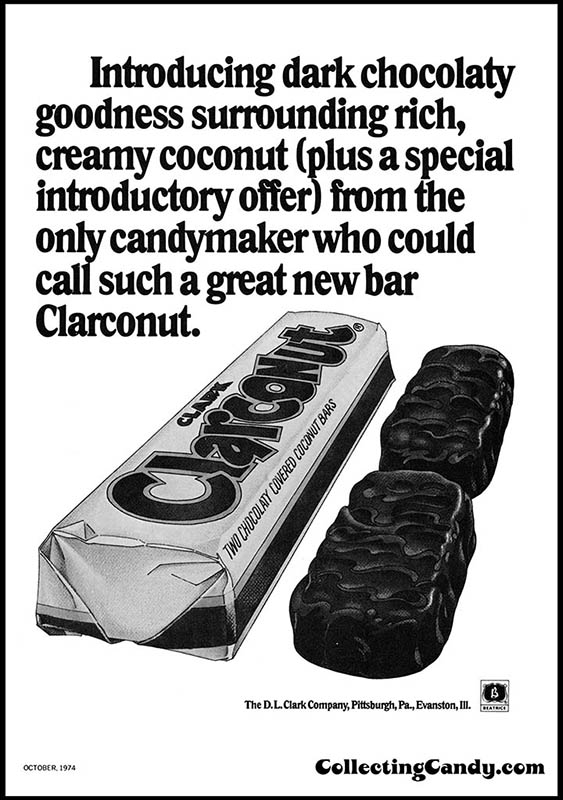 I always enjoy examples of brands having fun with their names and logos and the Clarconut is, I think, a nice example of both of those.  So I was thrilled when I was able to add an example of a Clarconut wrapper to my collection recently and to be able to share it here today: 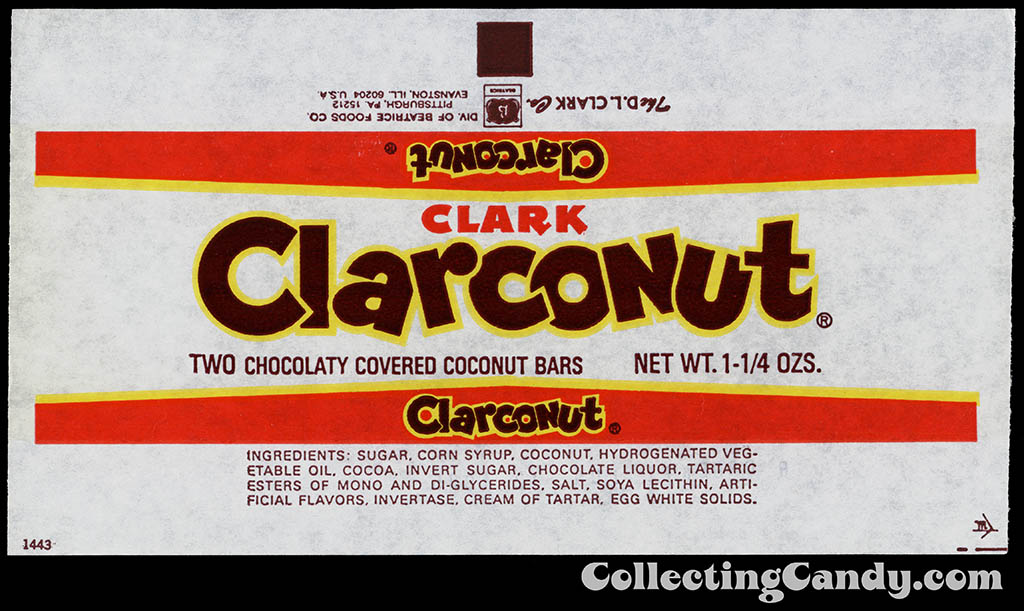 I really do dig that Clarconut wrapper. 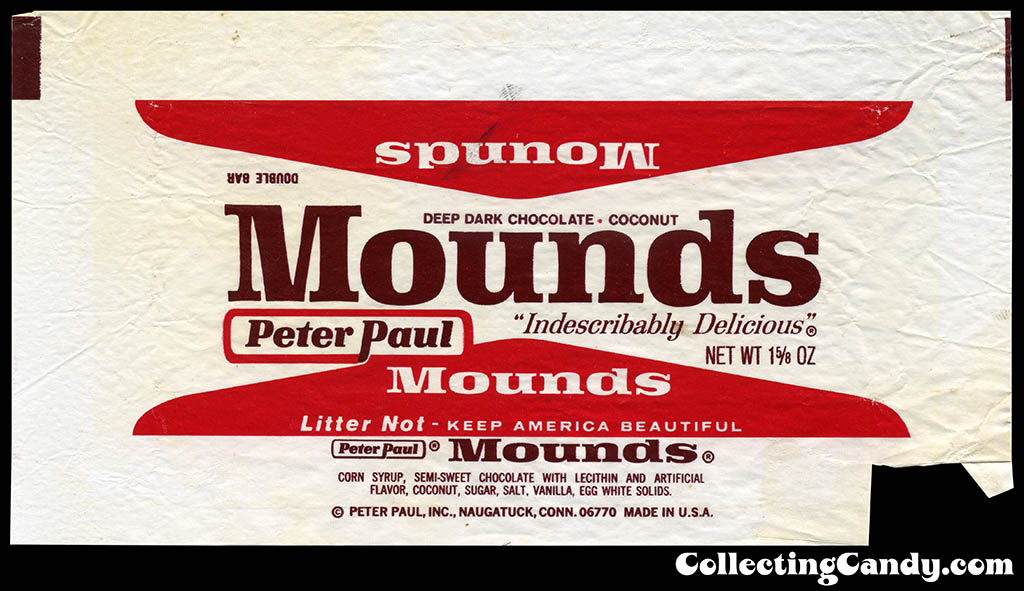 When placed side-by-side, it’s hard to argue against the similarities being intentional.  The top-and-bottom peaked graphic element is very similar even if it’s a bit more subtle on Clark’s version:

I could find no hard evidence that Peter Paul protested the Clarconut design or if it had run afoul of some part of the Mounds visual trademark, but by 1977 Clark had discontinued the Clarconut and returned it to its original “Clark Coconut” branding.  They also brought the wrapper design visually in line with the standard Clark bar, as you can see here: 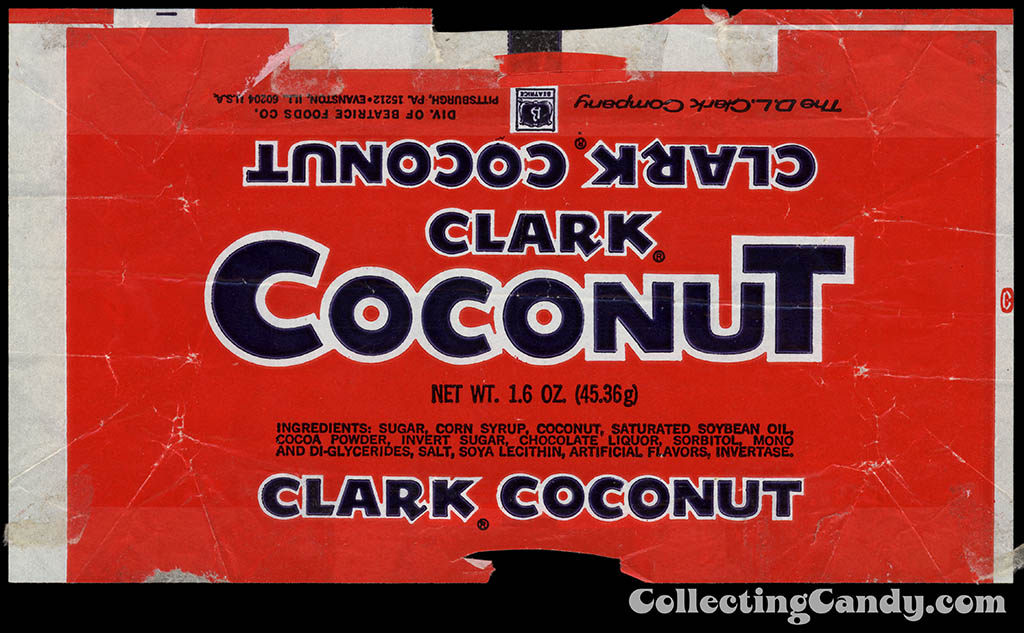 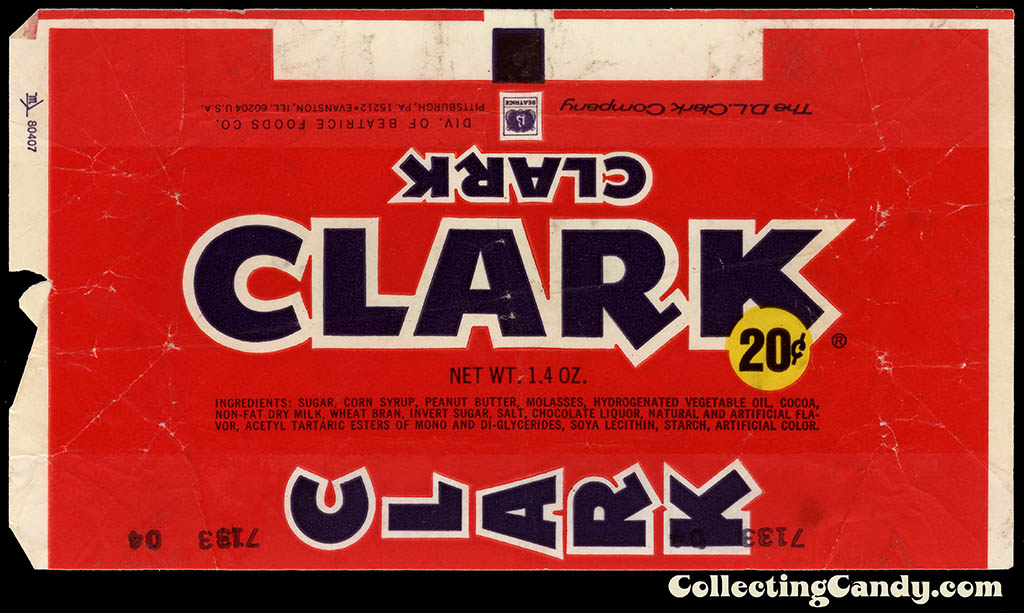 Fascinating stuff, and it makes me really wish I could track down some of the people who were working for Clark at the time.   There must be some great behind-the-scenes stories on this one.

For now though, that’s everything I’ve got to share on the tale of Clark’s catchy Clarconut bar.  See you next time!

A New York City based writer, editor and sometimes actor. After spending much of the 1990′s in the comic book business helping tell the stories of Marvel Comics’ X-Men as series editor, he has since split his time between developing his own entertainment properties while still consulting and working on others. Having been described as “the Indiana Jones of lost and forgotten candy”, Jason is one of the country’s premier candy collectors and historians with his discoveries appearing in countless blogs, magazines, newspaper articles, and books. Always happy to share his knowledge and unique perspectives on this colorful part of our popular culture, Jason has consulted with New York’s Museum of Food and Drink and has also been a featured guest on Food Network’s Heavyweights, France’s M6 Capital, and New York’s TheActionRoom.com. My Google Profile+
View all posts by Jason Liebig →
This entry was posted in 1950's, 1960's, 1970's, Chocolate and tagged 1970's, 1970's candy wrappers, 70's, candy collecting, candy collection, candy collector, candy wrapper collection, candy wrapper collector, Clark, cocoanut, coconut, collectible, collecting candy, confectionery, confections, D.L. Clark, Hershey, Mounds, Necco, packaging, Peter Paul, sweets, trademark, vintage candy wrapper, wrapper. Bookmark the permalink.