As the weather turns colder, I thought it would be fun to cover a near-forgotten treat from the 1980’s that will inspire warmer climates.  This is one that first hit stores way back in 1982 and I’m excited to share the first known images of the packaging today.  I believe this one has been unseen for nearly 30 years.  So make the jump to check out Brach’s Coconut Hula Chews!

It may not yet be clear here on the site but I’ve been on quite the Brach’s jag this year, and with their groovy updated packaging hitting stores in 2014-2015, I don’t think that’s going to change.  Since I’ve been re-enamored with the brand as of late, it’s especially fun for me to share this long-lost Brach’s treat from the 1980’s today.

Brach’s Hula Chews were introduced in 1982 as a multi-pack type item, available in large bags and a boxed offering.  Here’s a newspaper circular ad/coupon announcing them: 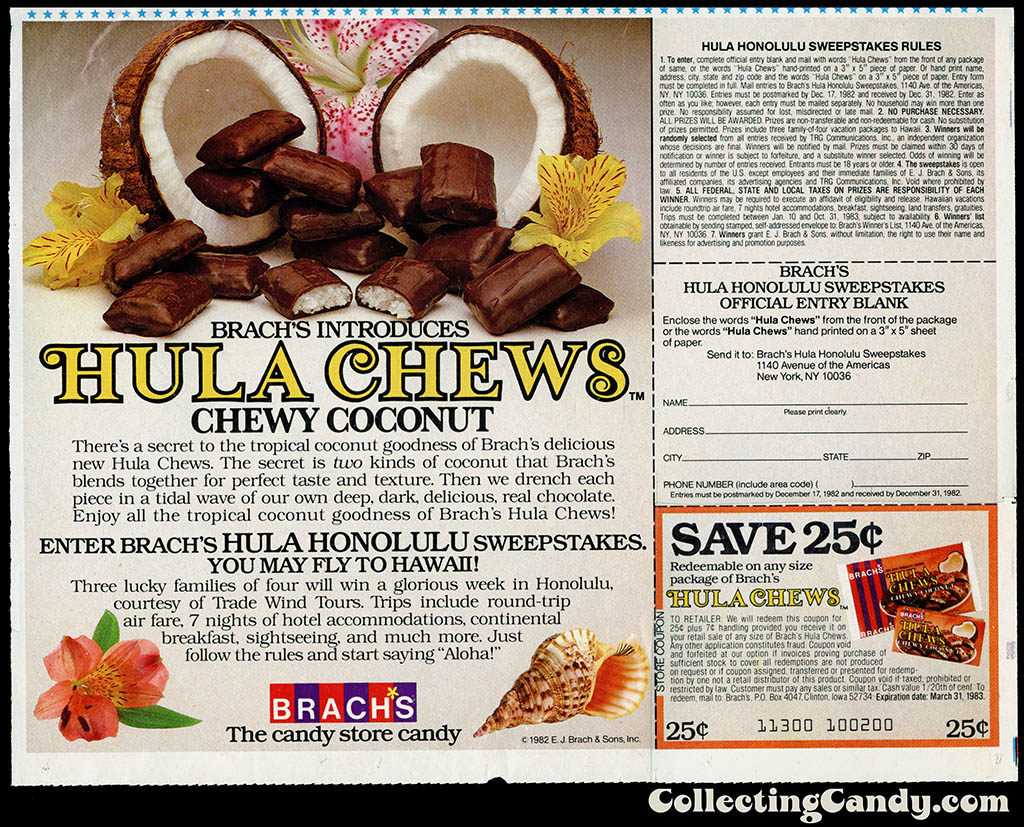 And here’s a better look at that clip-out coupon, which features images of the launch packages: 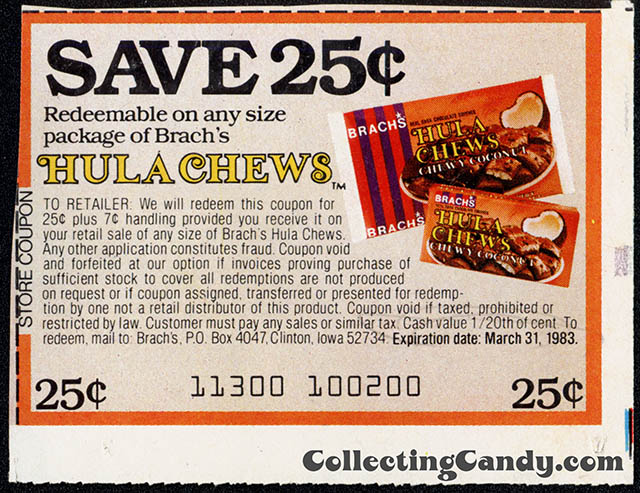 I don’t have either of those packages in my archives, but I sure would love to find examples of them.  From these small images – they look pretty slick.  What I DO have however is the checkout isle-size or standard shelf size Hula Chews offering, which I believe was rolled out the following year in 1983.  This would have been sold and stocked next to the Snickers bars and so on and according to my research, images of this wrapper have never been published online before – so this is a world premiere!  Here it is: 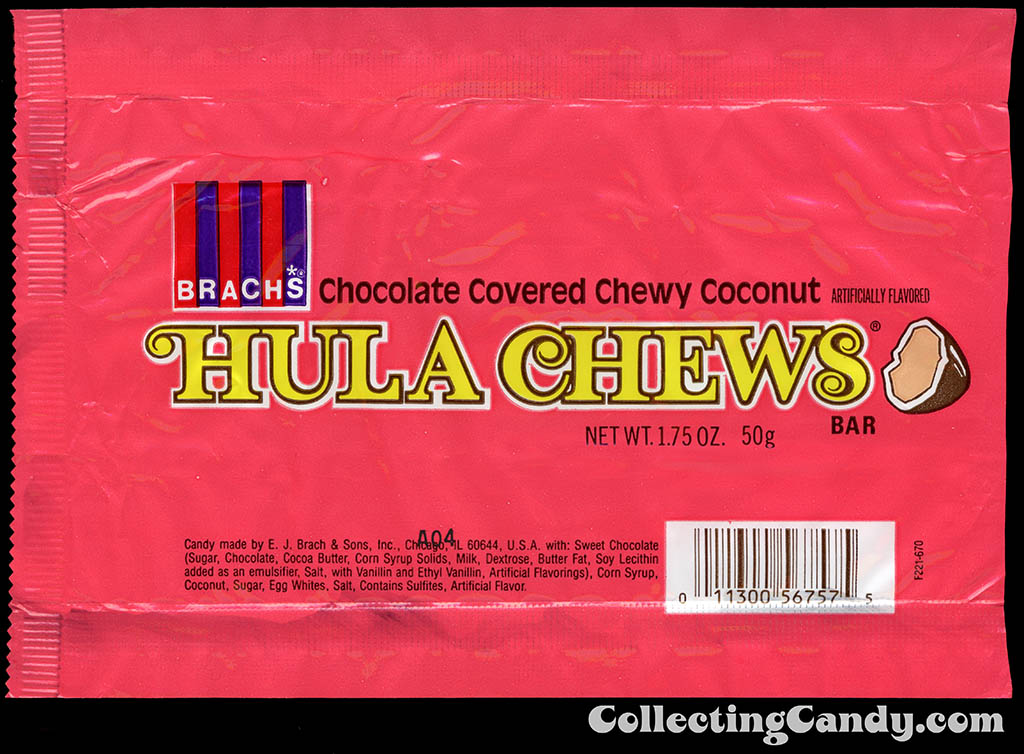 It’s amazing how simple and unadorned the packaging is.   Even back then I think it was rare to find a wrapper design with so much negative space.  I really dig it.

I found a television commercial for Hula Chews tucked within a YouTube video of 1980’s NBC promos.  It’s a 2 1/2 minute video, but if you jump to 1:30 in, you can get right to the Hula Chews 30-second spot.  It’s worth checking out as I suspect it’s also a commercial they wouldn’t get away with today:

I haven’t been able to confirm how long Hula Chews remained on sale, but I’ve found no evidence of them making it into the 1990’s.  Chances are they lasted a few years and that was it.

Anyone recall trying Brach’s Hula Chews?  I don’t remember encountering them myself and even if I had, I likely would have skipped them (I wasn’t a fan of coconut back then) so I’m curious to hear what other people thought.

And that’s everything I’ve got right now on the delightful 80’s treat that was Brach’s Coconut Hula Chews.  See you next time! 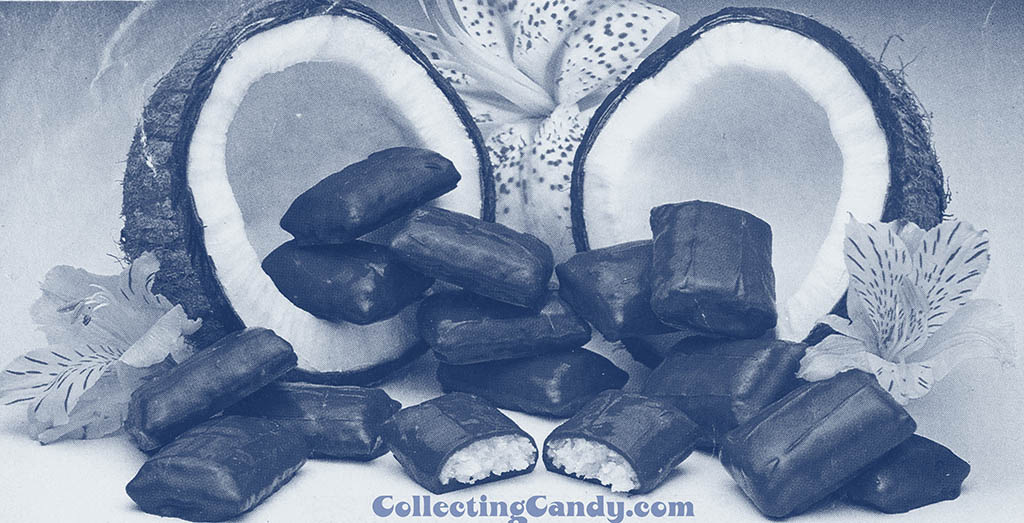 A New York City based writer, editor and sometimes actor. After spending much of the 1990′s in the comic book business helping tell the stories of Marvel Comics’ X-Men as series editor, he has since split his time between developing his own entertainment properties while still consulting and working on others. Having been described as “the Indiana Jones of lost and forgotten candy”, Jason is one of the country’s premier candy collectors and historians with his discoveries appearing in countless blogs, magazines, newspaper articles, and books. Always happy to share his knowledge and unique perspectives on this colorful part of our popular culture, Jason has consulted with New York’s Museum of Food and Drink and has also been a featured guest on Food Network’s Heavyweights, France’s M6 Capital, and New York’s TheActionRoom.com. My Google Profile+
View all posts by Jason Liebig →
This entry was posted in 1980's, Chocolate and tagged 1980's, 1980's candy, 80's, 80's candy, Brach's, candy collecting, candy collection, candy collector, candy wrapper collection, candy wrapper collector, coconut, collectible, collecting candy, confectionery, confections, packaging, sweets, vintage candy wrapper, wrapper. Bookmark the permalink.

6 Responses to Plucked from the 80’s: Brach’s Coconut Hula Chews!