Traditionally, the United States gets the bulk of Halloween-themed candy, but in recent years the popularity of Halloween has grown around the world.  That’s led to some pretty cool Halloween confectionery releases originating in spots outside of the good old U.S.A.  One of them I’m excited to share is a Halloween release Blood Orange Kit Kat from Germany.

Collecting Kit Kat wrappers could easily be a hobby in itself, with seemingly endless special editions and regional releases having come and gone over the years.   I’ve really enjoyed the Kit Kat pieces I’ve picked up or saved for my collection, but my favorites tend to be the oddball flavors and especially the Halloween editions.  So when I first saw this next wrapper, I knew I wanted it in my collection.

Produced in Germany back in 2004, here is Nestle’s Kit Kat Blood Orange: 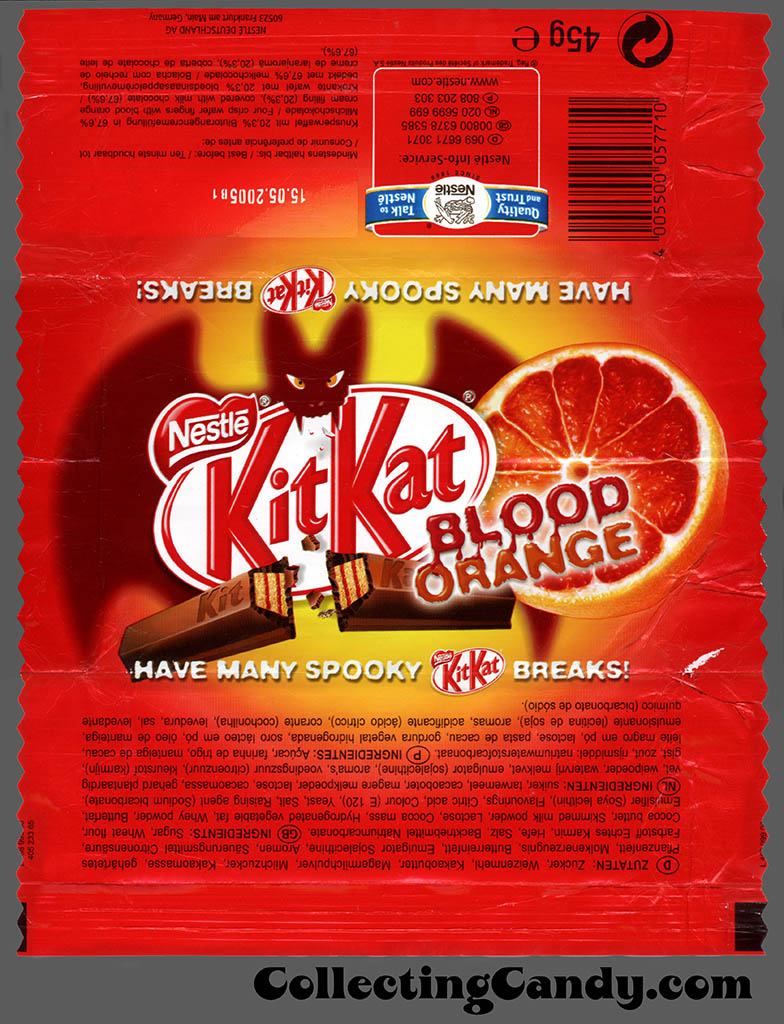 I love the illustration on that one – it’s awesome.

Over the last several years, Hershey’s in the United States has released a few different wrapper designs for their Halloween Kit Kat.  Here they are:

This next design was introduced for Halloween 2012 and in 2014 it returned for its third consecutive appearance. 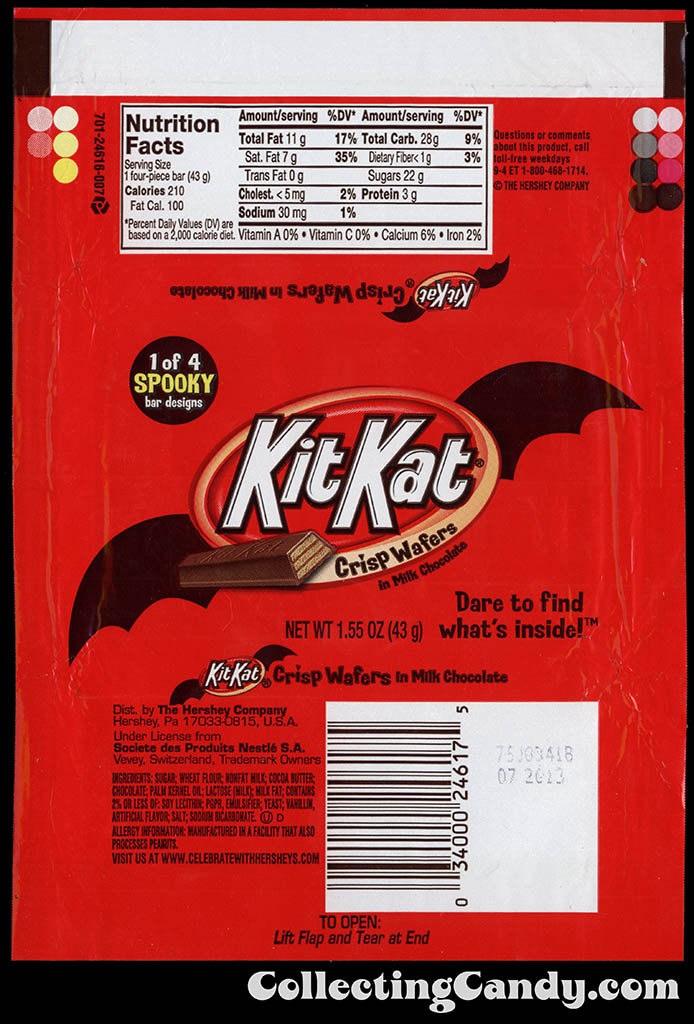 Possibly one of the neatest Halloween Kit Kat wrappers from recent years came out of Nestle Canada in 2012 and has also made return holiday appearances in the two years after.  Here it is:

To round out today’s coverage – here are a couple different USA Kit Kat Halloween minis releases: 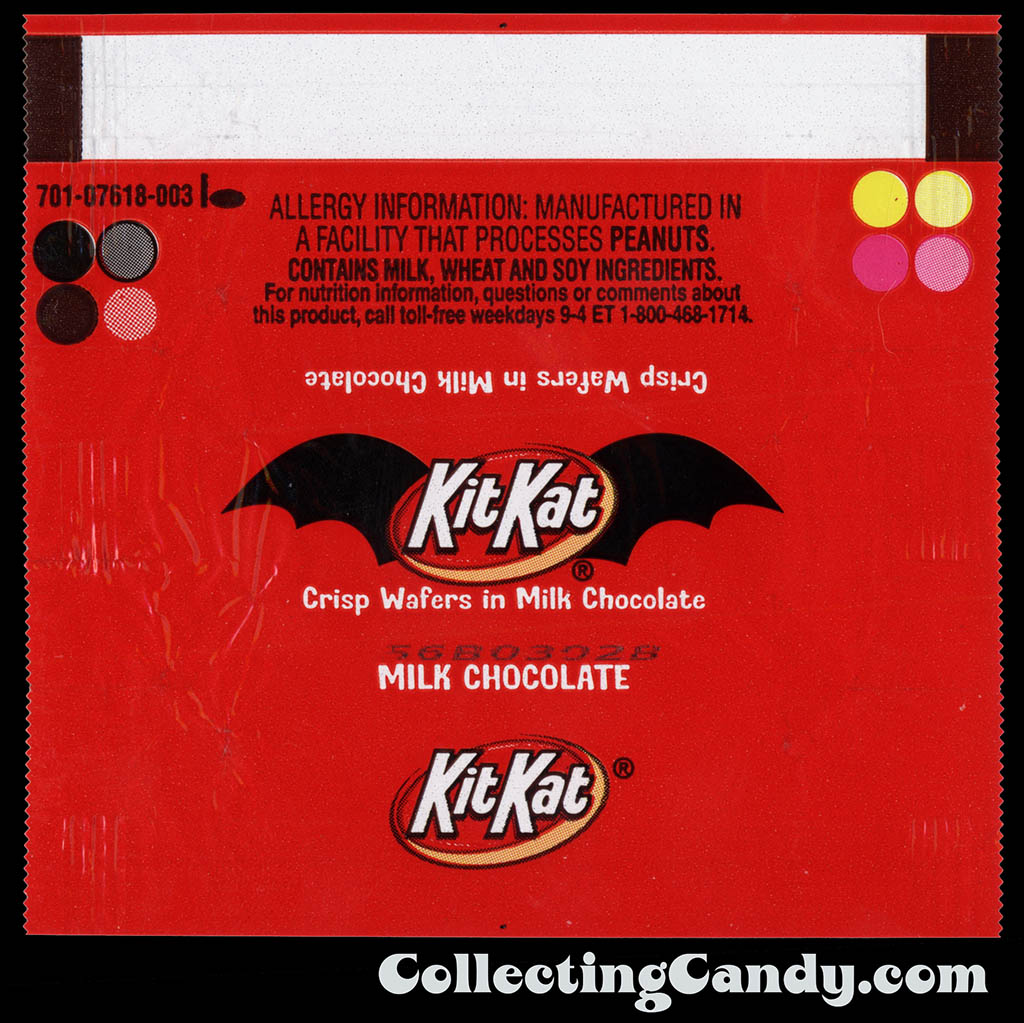 And that’s it for today’s coverage of Germany’s Halloween Blood Orange Kit Kat, along with a little extra Halloween Kit Kat fun.   See you next time!

A New York City based writer, editor and sometimes actor. After spending much of the 1990′s in the comic book business helping tell the stories of Marvel Comics’ X-Men as series editor, he has since split his time between developing his own entertainment properties while still consulting and working on others. Having been described as “the Indiana Jones of lost and forgotten candy”, Jason is one of the country’s premier candy collectors and historians with his discoveries appearing in countless blogs, magazines, newspaper articles, and books. Always happy to share his knowledge and unique perspectives on this colorful part of our popular culture, Jason has consulted with New York’s Museum of Food and Drink and has also been a featured guest on Food Network’s Heavyweights, France’s M6 Capital, and New York’s TheActionRoom.com. My Google Profile+
View all posts by Jason Liebig →
This entry was posted in Chocolate, CountdownToHalloween, Halloween, Hershey, Nestle and tagged candy collecting, candy collection, candy collector, candy wrapper collection, candy wrapper collector, collectible, collecting candy, confectionery, confections, Halloween, Hershey, Kit Kat, KitKat, Nestle, packaging, sweets, vintage candy wrapper, wrapper. Bookmark the permalink.