Yesterday, as part of a two-part flashback recap, I presented a collection of my favorite CountdownToHalloween entries from past years.  Those posts showcased items that were largely contemporary in nature, so today I’ll be following that up by putting a spotlight on past year’s posts where the focus was vintage goodies.

So make the jump for the second part of our two-part CountdownToHalloween flashback recap – vintage-style!

As I said, the posts we’ll be highlighting today focus on vintage material and because of that, many of these may be entirely new to you.  I hope you enjoy it:

Kicking off today’s Halloween highlight reel is a post from back in 2012 that covered a trio of vintage Halloween Wonka products that were (probably) never released! 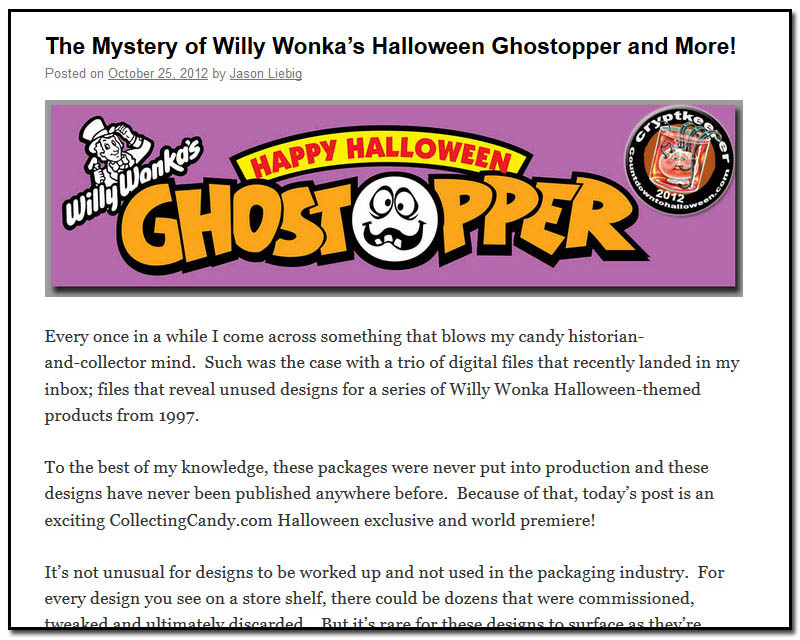 For my first year of Halloween coverage back in 2012, I tended to load up content into single posts and that was certainly the case with this next entry.  I crammed in a number of great vintage trade ads into this one that, if I were covering them today, I would have spread out across  a number of separate days: 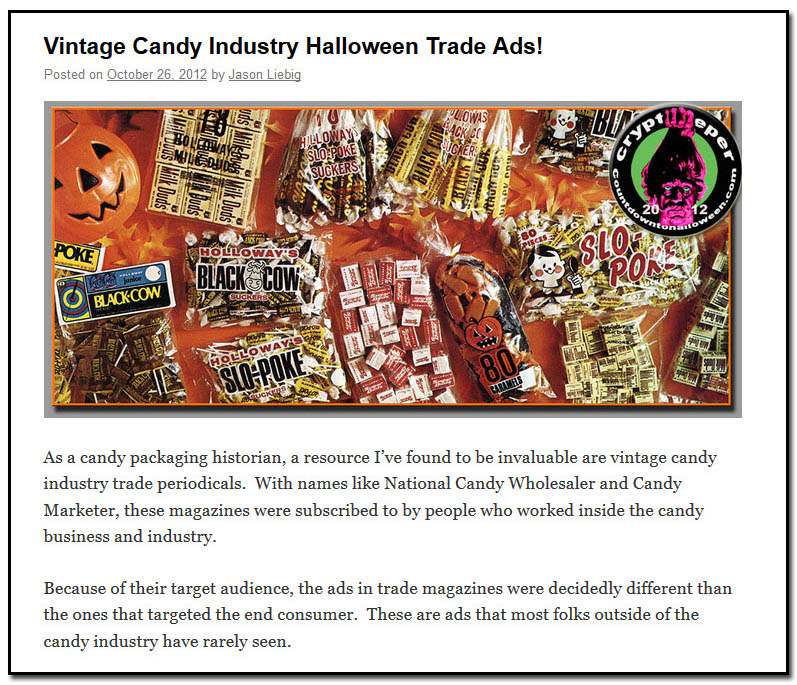 Unlike the trade ads found in that last post, this next one features consumer ads that would have been found in newspapers around the holiday. 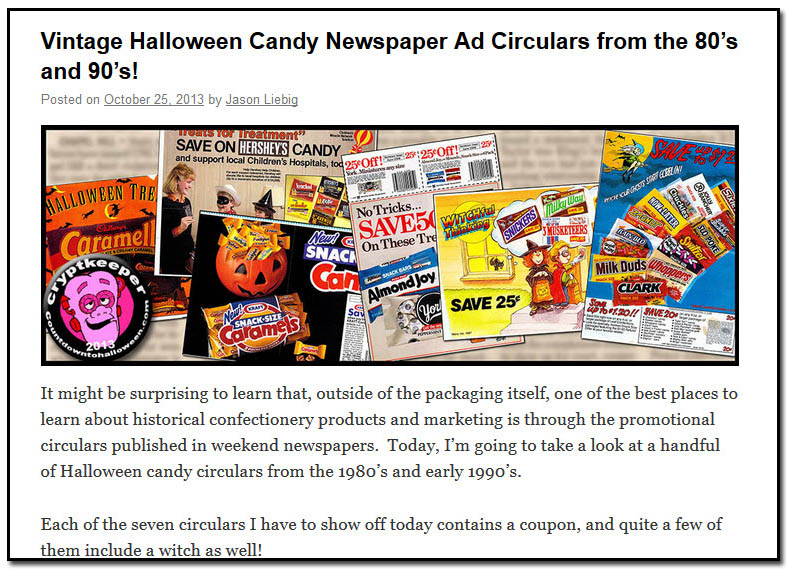 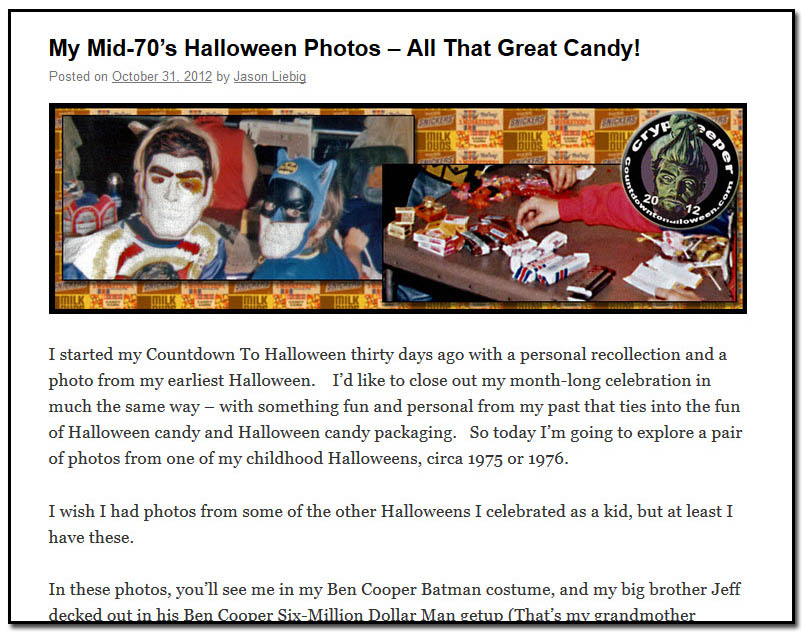 ————————————————
Pocky is a well-known Japanese confection which, due to its popularity outside of Japan, can often be found in import shops here in the United States.  Back in the the mid-2000’s Pocky got a colorful Halloween release which I covered here in 2012: 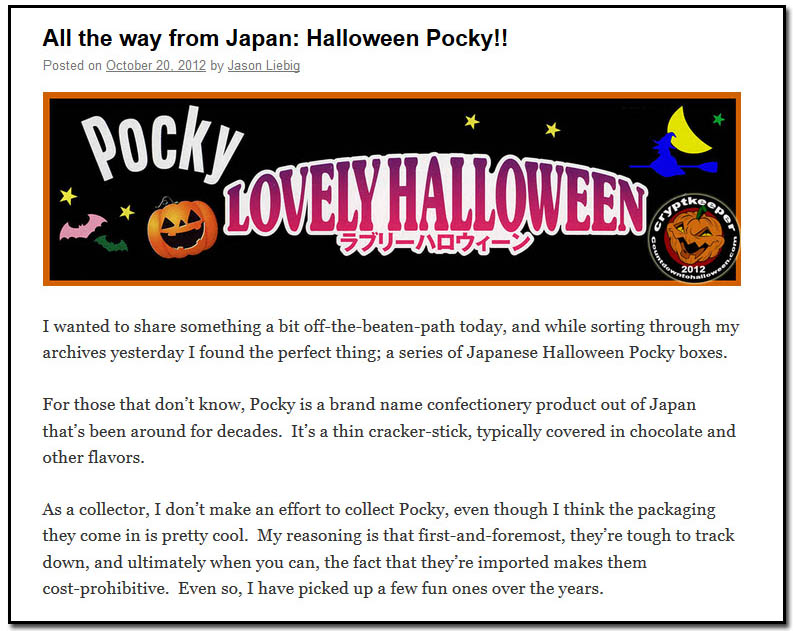 These Halloween hand-puppet packages from the 1960’s and 1970’s are pretty weird (and weirdly awesome), so you should check them out: 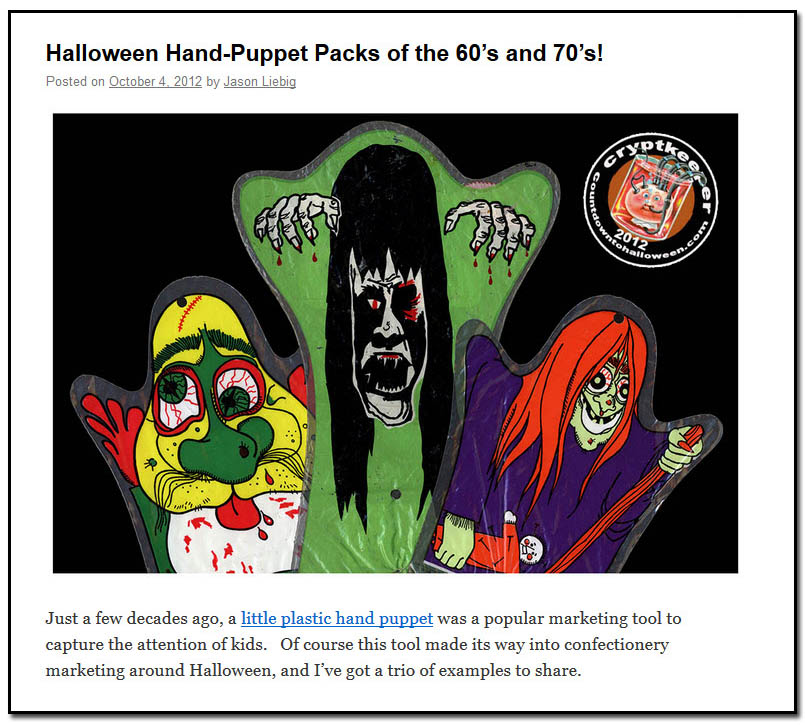 A fun Fleer confectionery classic is their large, pressed-dextrose bubblegum releases, most familiarly offered in the shape of a Halloween Pumpkin-Face.  A few were featured in this 2012 Countdown post: 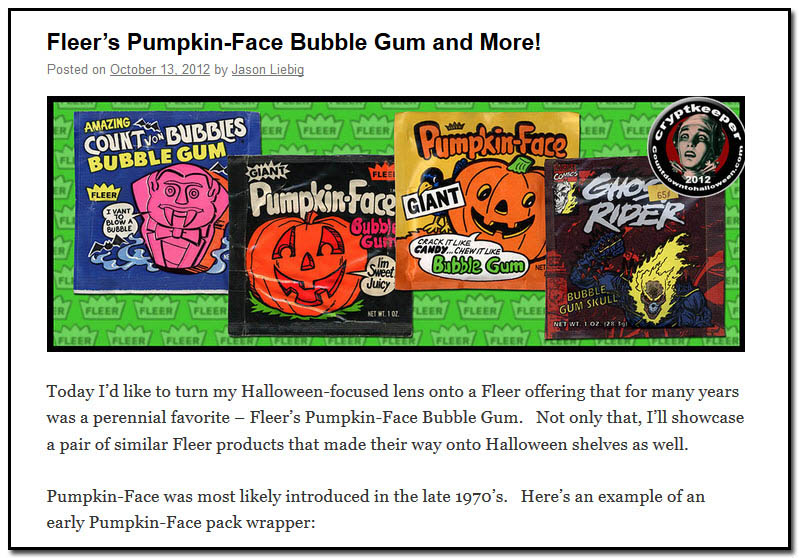 One of my very first CountdownToHalloween contributions, this next one also remains one of the grooviest.  Because, for this early Countdown post, I showcased Fleer’s 1970’s Monster Mix bubblegum.  It’s a pretty amazing piece, so click it and check it out! 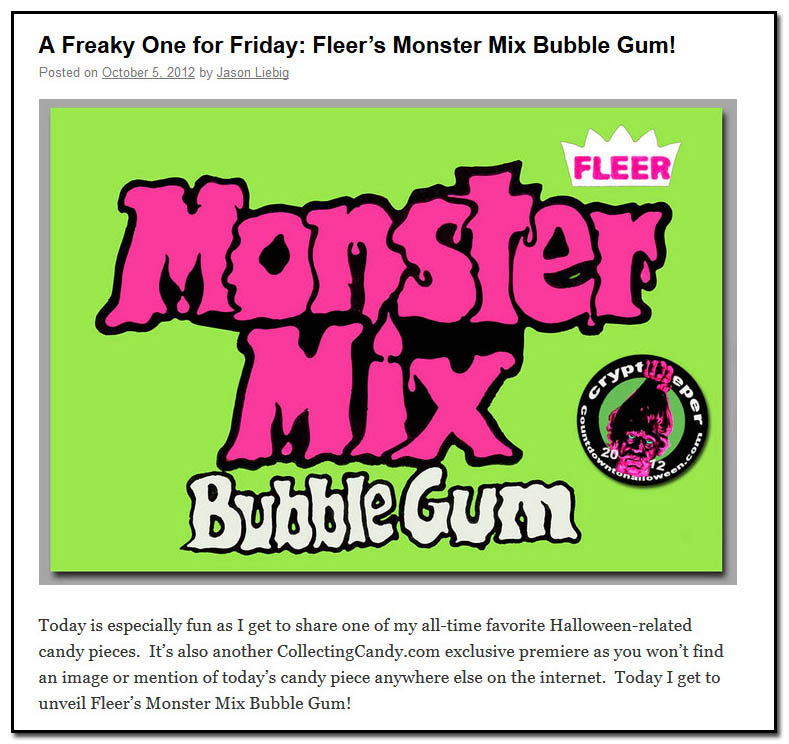 More from Fleer – this time the starting point was a 1993 candy trade magazine ad featuring lots of goodies, with the CountownToHalloween post focusing on Fleer’s then-evergreen property, Mr. Bones 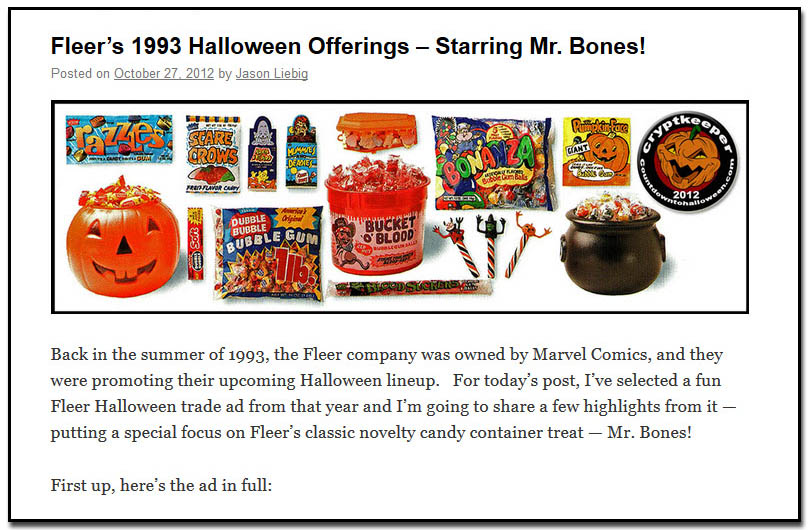 When I posted this next entry to our CountdownToHalloween in 2012, I didn’t expect it to register much with people – as I felt it was more of a lighter topic.  So I was truly surprised when it turned out to be one of the most popular posts from my inaugural year of being a part of the Countdown.  In retrospect, maybe I should have seen it coming as it is a pretty great peek into Halloween’s past: 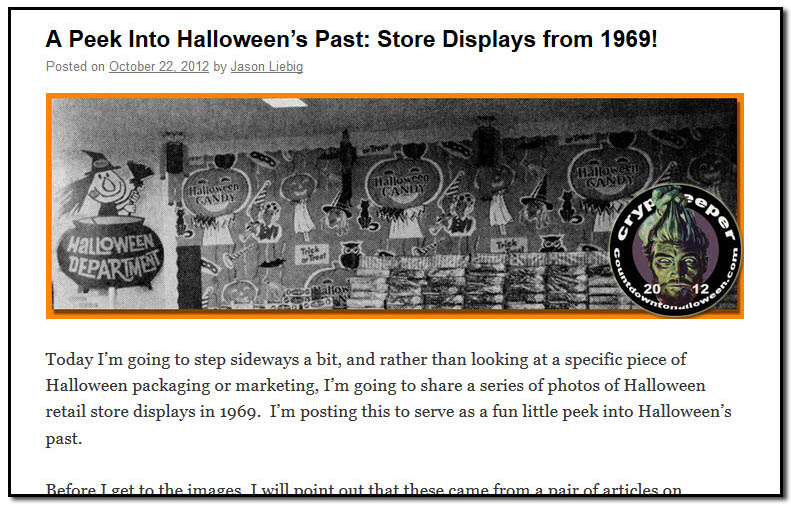 Finally, here’s a wonderful little retrospective of Halloween-themed marshmallow Peeps – or as they have sometimes been colorfully called, Witchmallows: 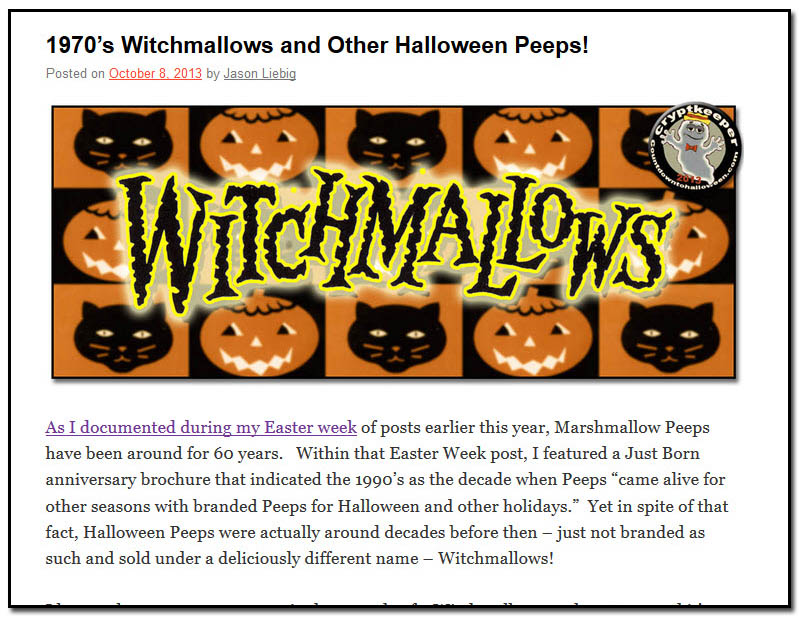 A New York City based writer, editor and sometimes actor. After spending much of the 1990′s in the comic book business helping tell the stories of Marvel Comics’ X-Men as series editor, he has since split his time between developing his own entertainment properties while still consulting and working on others. Having been described as “the Indiana Jones of lost and forgotten candy”, Jason is one of the country’s premier candy collectors and historians with his discoveries appearing in countless blogs, magazines, newspaper articles, and books. Always happy to share his knowledge and unique perspectives on this colorful part of our popular culture, Jason has consulted with New York’s Museum of Food and Drink and has also been a featured guest on Food Network’s Heavyweights, France’s M6 Capital, and New York’s TheActionRoom.com. My Google Profile+
View all posts by Jason Liebig →
This entry was posted in 1960's, 1970's, 1980's, 1990's, Boxed, Bubble Gum, CountdownToHalloween, Fleer, Gum, Halloween, Holiday, Japanese, Wonka and tagged 1960's, 1970's, 1980's, 60's, 70's, 80's, candy collecting, candy collection, candy collector, candy wrapper collection, candy wrapper collector, collectible, collecting candy, confectionery, confections, Halloween, packaging, sweets, vintage, vintage candy wrapper, wrapper. Bookmark the permalink.