CountdownToHalloween Past Years Recap – Part One of Two!

Getting just past the midpoint on our month-long CountdownToHalloween, I’ve decided to offer up something a little different – a two-part recap of some of my favorite posts from our previous years’ Halloween coverage.

Now, I could sell this two-parter as a special feature (which it most certainly is) but the reality is that I’m attending back-to-back weddings this weekend and needed a couple quick and easy posts to catch my breath.  I figure since I’ve been keeping up my one-post-per-day goal for the month thus far, these two “flashback episode” posts can be forgiven and enjoyed as a fun detour.  So make the jump to check out part one of my two-part CountdownToHalloween Past Years Recap!

Today’s recap will focus on posts that, at the time, included mostly contemporary Halloween goodies.  Here they are:

As a big fan of Just Born’s family of boxed candies like Mike and Ike and Hot Tamales, seeing them fully invest in creating such fun seasonal releases for Halloween was especially exciting in 2013: 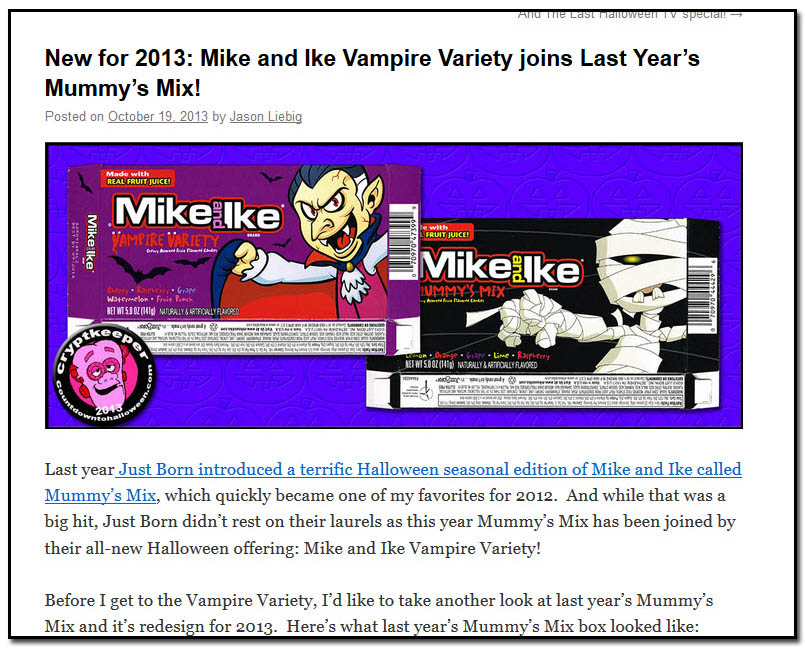 2013 was the first year I tried to pick up the entirety of a Russell Stover seasonal release with their Halloween Pumpkins – which turned out to be far more extensive and thus interesting than I could have imagined:

Trolli’s Evil Twins was a pretty recent addition to their lineup when they launched a boxed version of Evil Twins Minis for Halloween – and the box for these was a knockout. 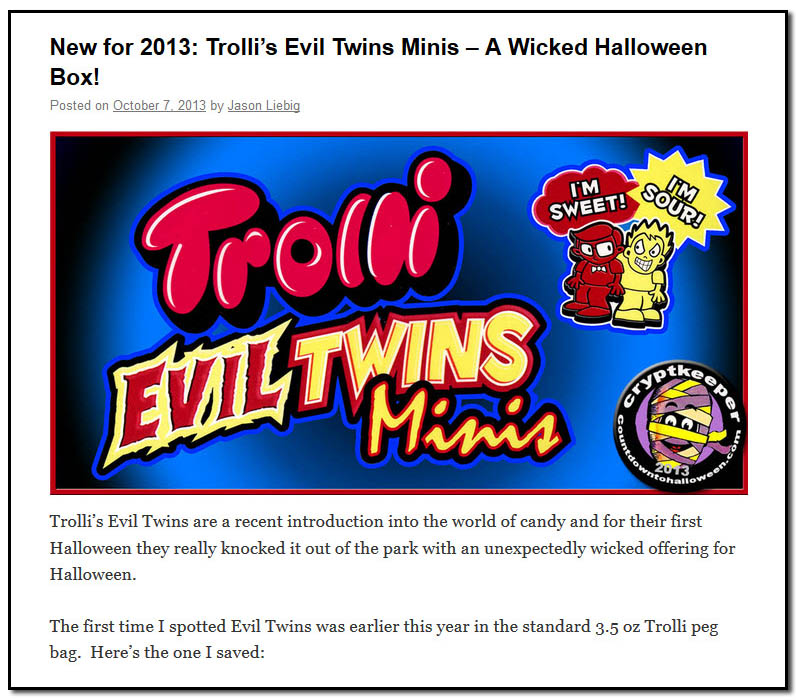 Always love seeing Zombies and candy mashed-up together and 2012 gave me the opportunity to cover a good bit of it.  Special highlight was Necco’s clever Skybar release, “Zombie Food”: 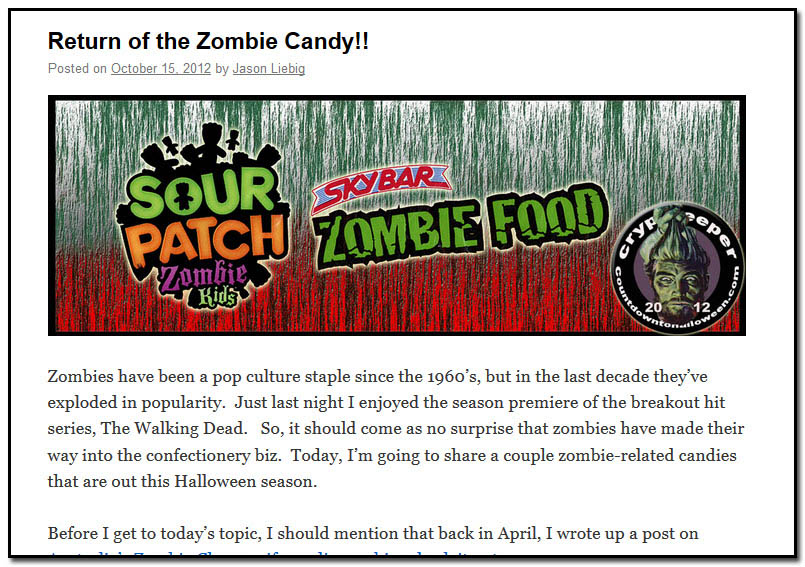 Like all Reese’s seasonal shaped versions of their classic peanut butter cups, their Halloween Pumpkins are a delicious annual treat.   Being able to finally track down and document a decent evolution of their packaging was pretty satisfying: 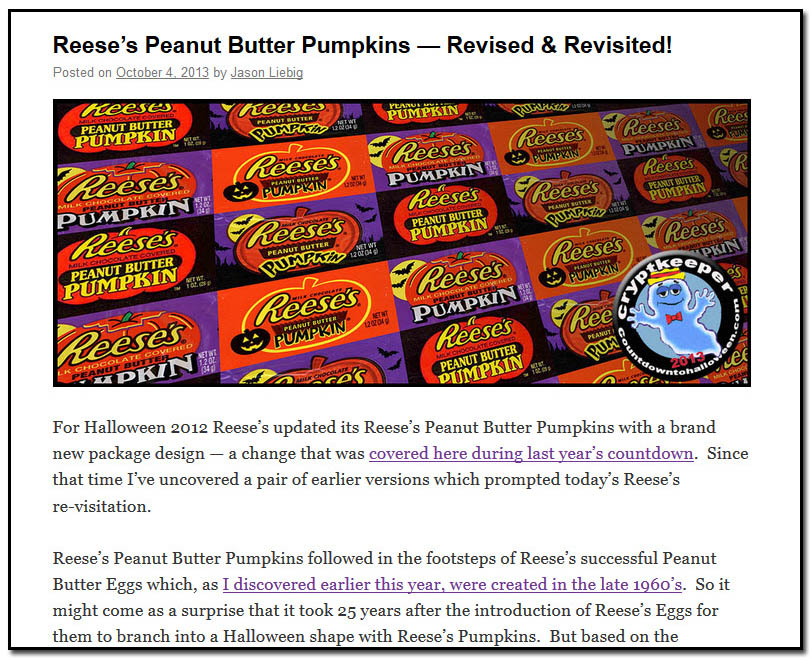 I think Ring Pops are a pretty snazzy-yet-simple bit of confectionery fun, but when you add in Halloween, it’s just too good: 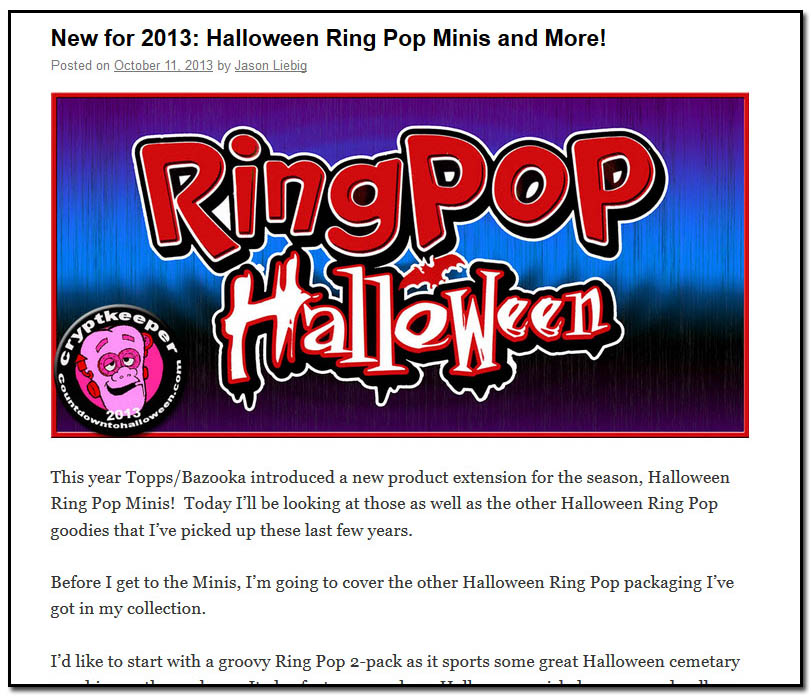 Nestle Canada surprised me in 2012 with a shockingly cool assortment of Halloween seasonal variants on four of their full-sized classic brands.  These were, in my opinion, instant classics:

One of the biggest surprises for me in 2013 (and what might have been my favorite new release that year) was from Neccco with their ridiculously cool Batwing Wafers.  My Countdown post praising them also led to me getting to meet the incredibly talented guy who designed the packaging for them, Geoff Bloom – who I plan to profile and interview for an upcoming post after the holiday: 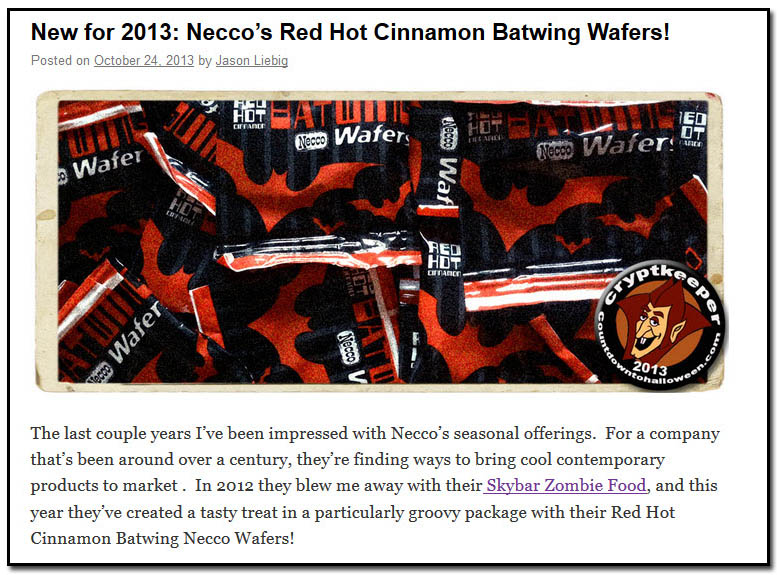 Getting to appear on Good Day Sacramento was especially fun back in 2012 – and it’s the kind of thing I think I’d like to do more of.  Nothing better than getting to share this material with folks who might not otherwise see it.  Better call my agent!

Back in 2012, Cadbury created their fun zombie-apocolypse-like “Goopocalypse” promotion to coincide with their Cadbury S’creme Eggs seasonal release.  The promotion was not run in the United States but it was available for viewing online and I was able to embed it within my post, which made this coverage especially groovy. 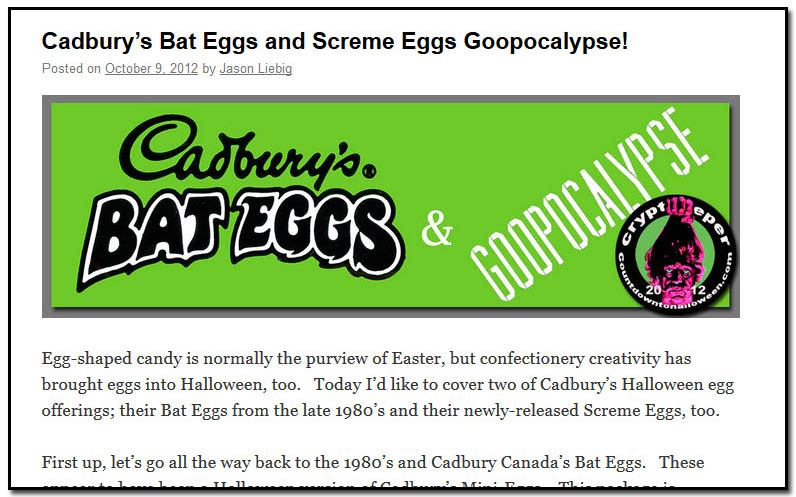 And finally, this 2012 post on Halloween Kit Kat packages I had in my collection was fun just because it was Halloween and it was Kit Kat.  And both of those are just so good – you mix them together and you can’t go wrong: 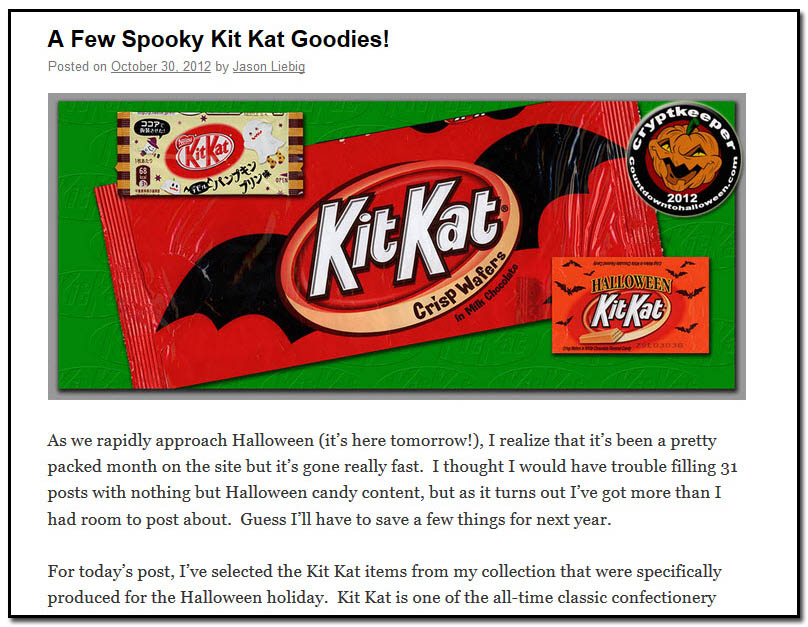 And that’s everything for day one of our two day CountdownToHalloween recap.  Come back tomorrow for the recap of some of my favorite vintage-themed Halloween posts from previous years.

A New York City based writer, editor and sometimes actor. After spending much of the 1990′s in the comic book business helping tell the stories of Marvel Comics’ X-Men as series editor, he has since split his time between developing his own entertainment properties while still consulting and working on others. Having been described as “the Indiana Jones of lost and forgotten candy”, Jason is one of the country’s premier candy collectors and historians with his discoveries appearing in countless blogs, magazines, newspaper articles, and books. Always happy to share his knowledge and unique perspectives on this colorful part of our popular culture, Jason has consulted with New York’s Museum of Food and Drink and has also been a featured guest on Food Network’s Heavyweights, France’s M6 Capital, and New York’s TheActionRoom.com. My Google Profile+
View all posts by Jason Liebig →
This entry was posted in Canadian, Chocolate, CountdownToHalloween, Halloween, Hershey, Holiday, Nestle and tagged candy collecting, candy collection, candy collector, candy wrapper collection, candy wrapper collector, collectible, collecting candy, confectionery, confections, Halloween, packaging, sweets, vintage candy wrapper, wrapper. Bookmark the permalink.