Last year, Jelly Belly introduced a new seasonal Halloween product in the form of Disney’s Vile Villains jelly beans.  The Vile Villains have returned this year, but with some notable changes and tweaks.  Make the jump to check them out and see all that’s changed since last year!

Once again Jelly Belly has opted for an assortment of four different packages and characters in the Disney Vile Villains assortment.  Returning from their 2013 introduction are Captain Hook, The Evil Queen and Ursula – while Cruella De Vil gets bumped this year in favor of a package featuring the resurgently-popular character, Maleficent.

The addition of Maleficent certainly makes sense, with the film starring Angelina Jolie likely to be in many people’s minds and on their televisions this Halloween season.  Let’s take a look at this years assortment, starting with the wicked new addition: 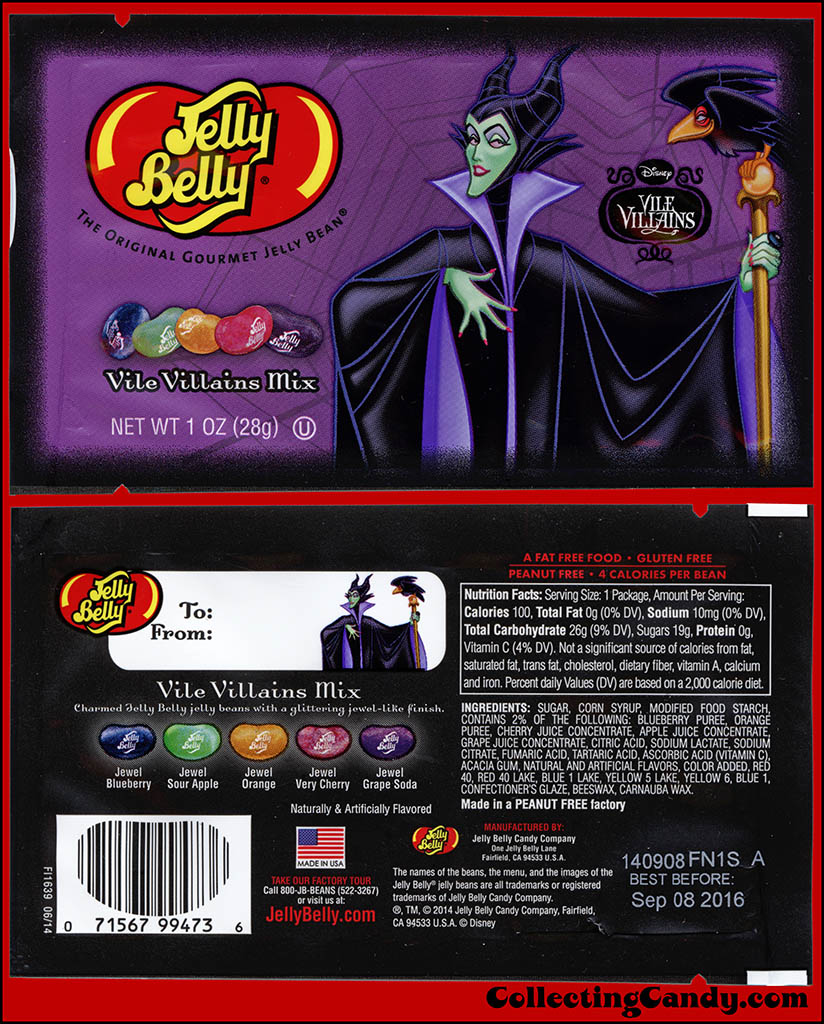 The look and feel of last year’s packaging returns largely intact this year, and it’s welcome as I thought last year’s release was fantastic.  The packages are colorful and bold with a design approach that really makes the character portraits stand out.  If you have any affection for these Disney characters at all, it’s hard not to like these – they’re things of beauty. 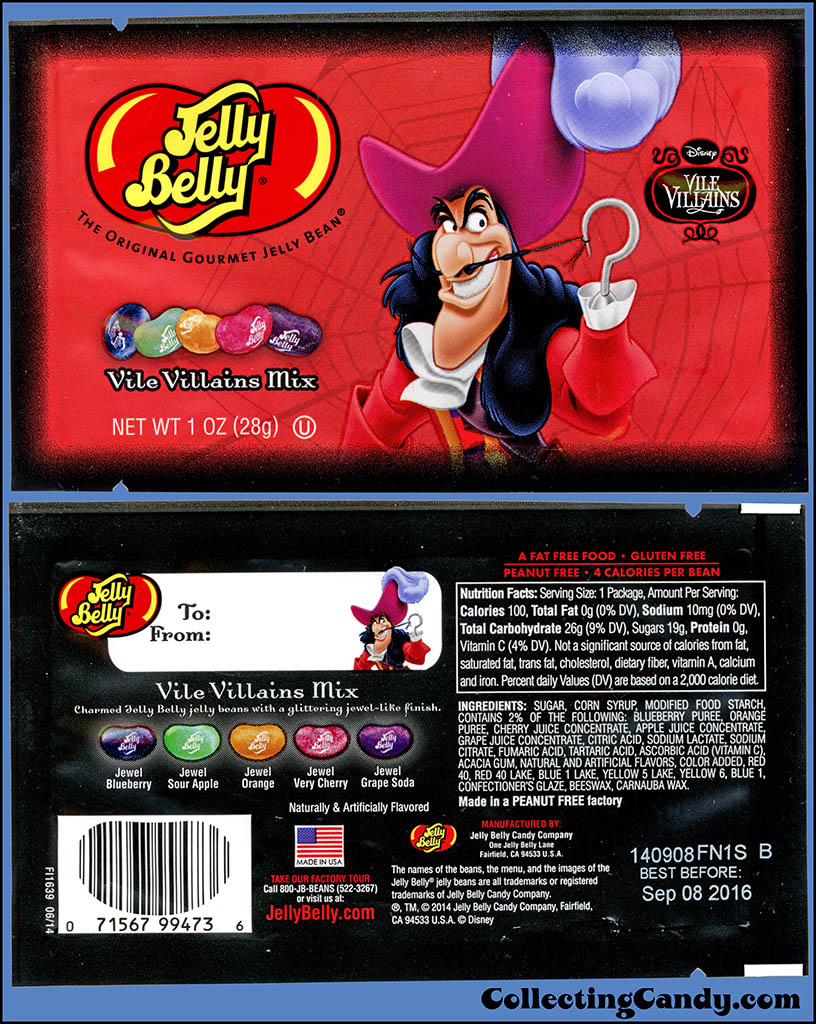 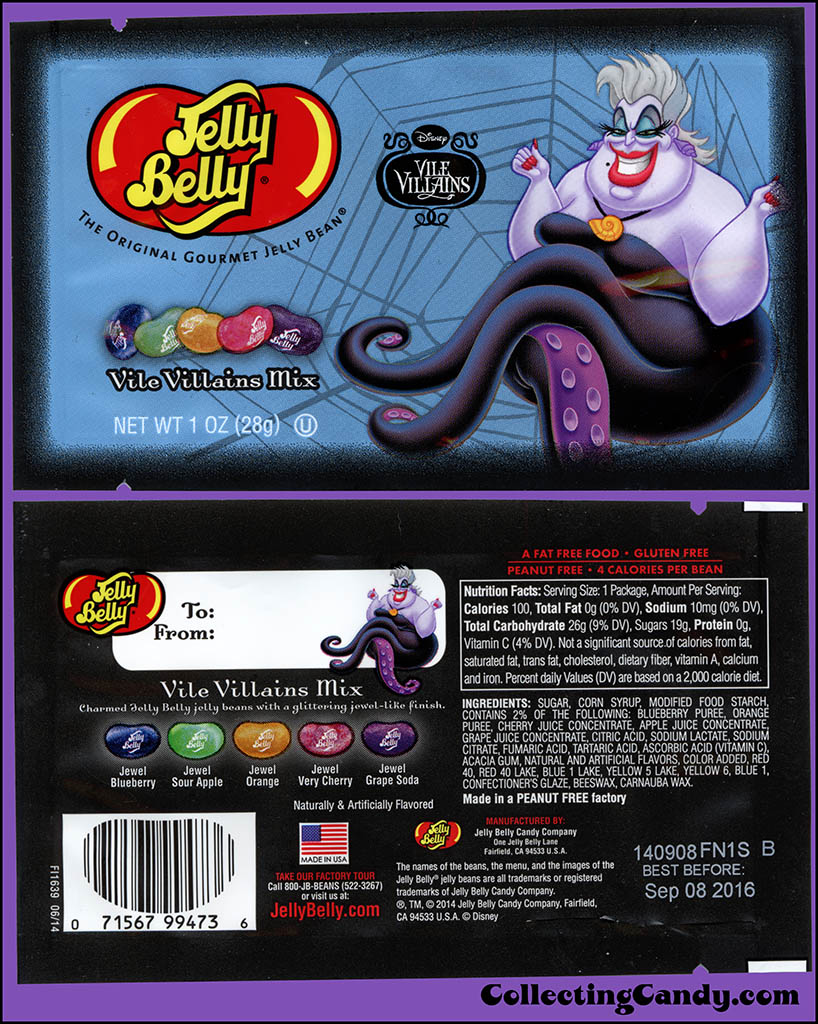 At first glance you might think that the only change to Jelly Belly’s Vile Villains assortment was the character switch, but there were a number of other tweaks.  Here are side-by-side comparison shots of the Vile Villains packs from last year next to their matching pack from this year – I’ll discuss the other changes after showing the images: 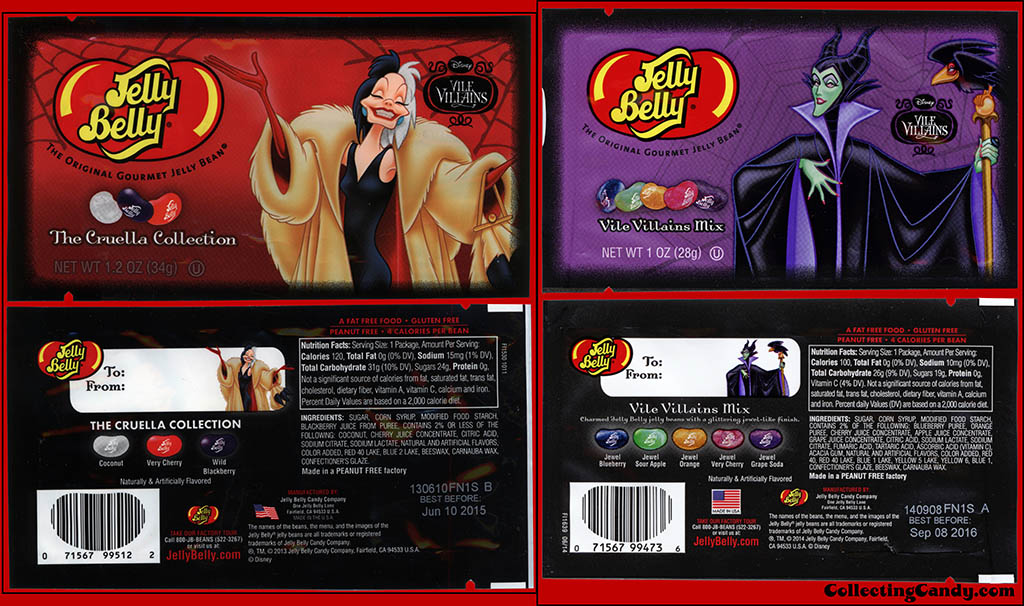 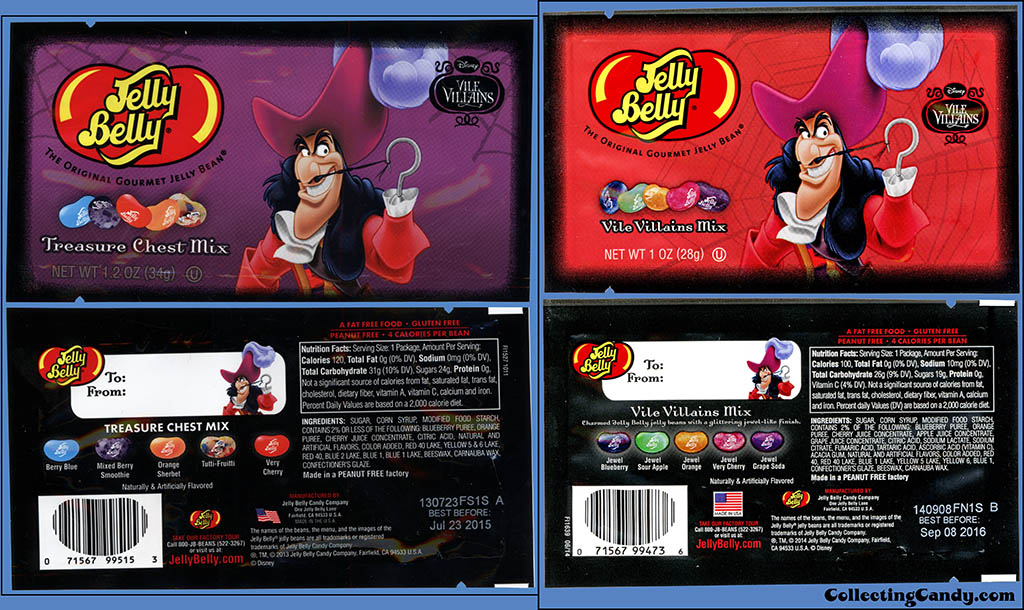 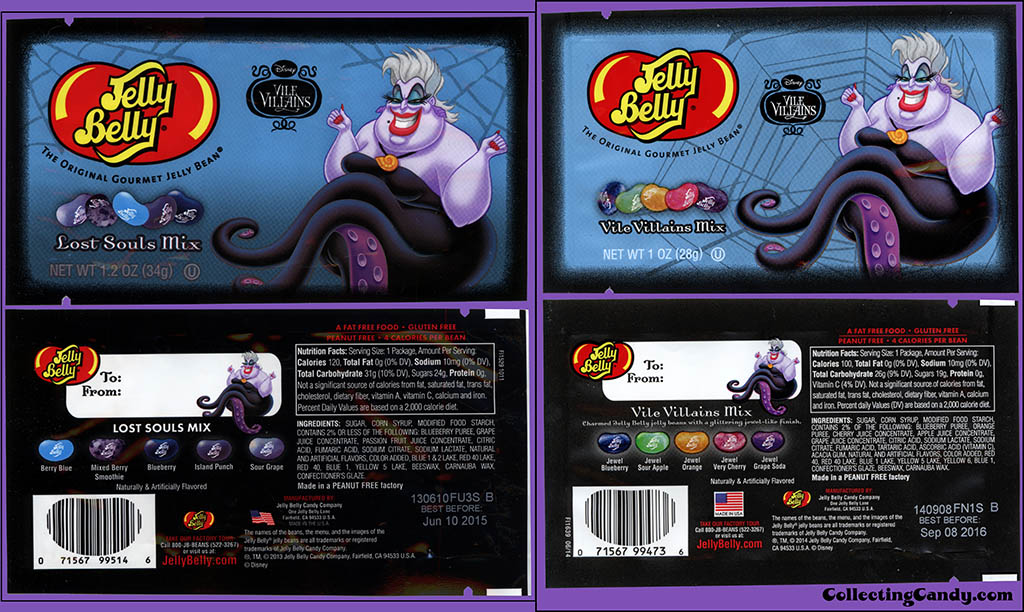 Beyond the Maleficent character swap, there are two notable differences between last year’s Vile Villains and this year.

Last year each Villain character received their own individualized jelly bean flavor “mix” designed around their particular character traits.  The Evil Queen got an “Evil Apple Mix”, Captain Hook’s package contained the “Treasure Chest Mix” and so on.  In that way, each package provided distinct and different jelly bean assortments.  With the 2014 edition, the choice was made to create a single “Vile Villain Mix” and offer the same jelly bean flavors across all the character packs.

One can assume that retailers might have requested this change or Jelly Belly made it after consumer feedback, opting to fill each package with a consistently popular flavor assortment.

The other major change from 2013 to 2014 is the pack size, which goes from 1.2 ounce packages to 1 once.  As it typically is, this change is likely the result of an effort to hit a certain retail price point for the product.  My best guess is that Jelly Belly was looking for a 99-cent retail target for these Vile Villains jelly bean packs and the volume reduction helped hit that.

Whatever the case, I think it’s fascinating to see the tweaks and changes that occur with a young seasonal product entering only its second year on shelves.  Hopefully the changes mean that we’ll continue to find Jelly Belly’s Disney Vile Villains Halloween assortments for years to come.

And that’s everything I’ve got to share on the return of Jelly Belly’s Disney Vile Villains assortment.  See you next time! 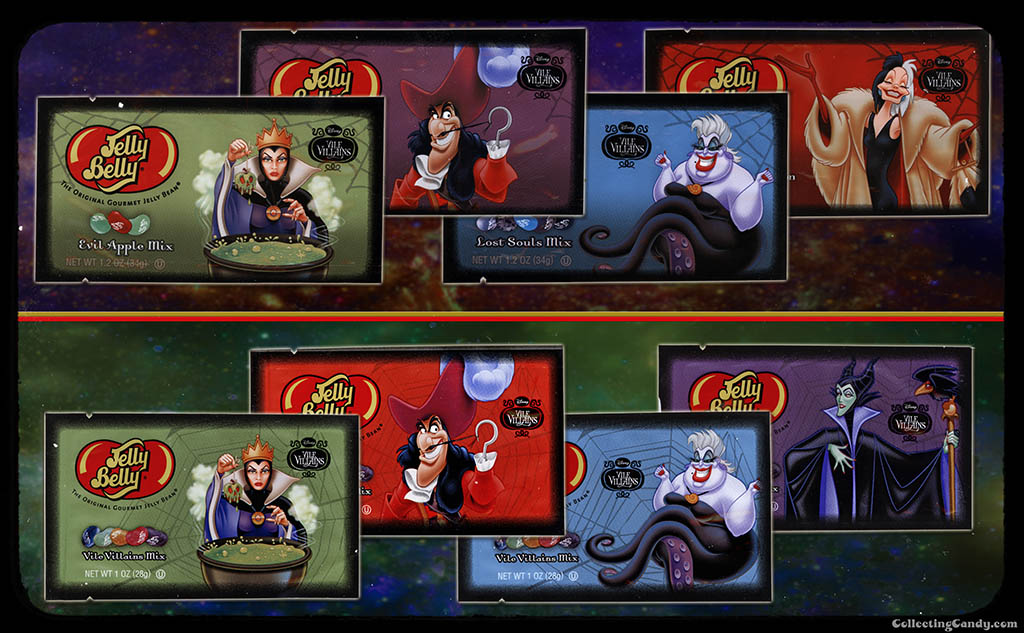 A New York City based writer, editor and sometimes actor. After spending much of the 1990′s in the comic book business helping tell the stories of Marvel Comics’ X-Men as series editor, he has since split his time between developing his own entertainment properties while still consulting and working on others. Having been described as “the Indiana Jones of lost and forgotten candy”, Jason is one of the country’s premier candy collectors and historians with his discoveries appearing in countless blogs, magazines, newspaper articles, and books. Always happy to share his knowledge and unique perspectives on this colorful part of our popular culture, Jason has consulted with New York’s Museum of Food and Drink and has also been a featured guest on Food Network’s Heavyweights, France’s M6 Capital, and New York’s TheActionRoom.com. My Google Profile+
View all posts by Jason Liebig →
This entry was posted in CountdownToHalloween, Halloween, Holiday and tagged candy collecting, candy collection, candy collector, candy wrapper collection, candy wrapper collector, collectible, collecting candy, confectionery, confections, Disney, Disneyana, Halloween, jelly bean, jelly beans, Jelly Belly, packaging, packaging design, Peter Pan, seasonal, Snow White, sweets, The Little Mermaid, Vile Villains, vintage candy wrapper, wrapper. Bookmark the permalink.