We’re kicking off our week of Easter coverage with a fun look at all the flavorful variations of Hershey’s Eggs currently available on shelves as well a glimpse into packaging for the same, going back to the 1980’s.   So make the jump to check out everything we’ve got on Hershey’s Eggs, past and present!

The earliest Hershey Eggs piece in my collection comes from the 1980’s and is an 8-ounce package for Hershey’s Milk Chocolate Eggs: 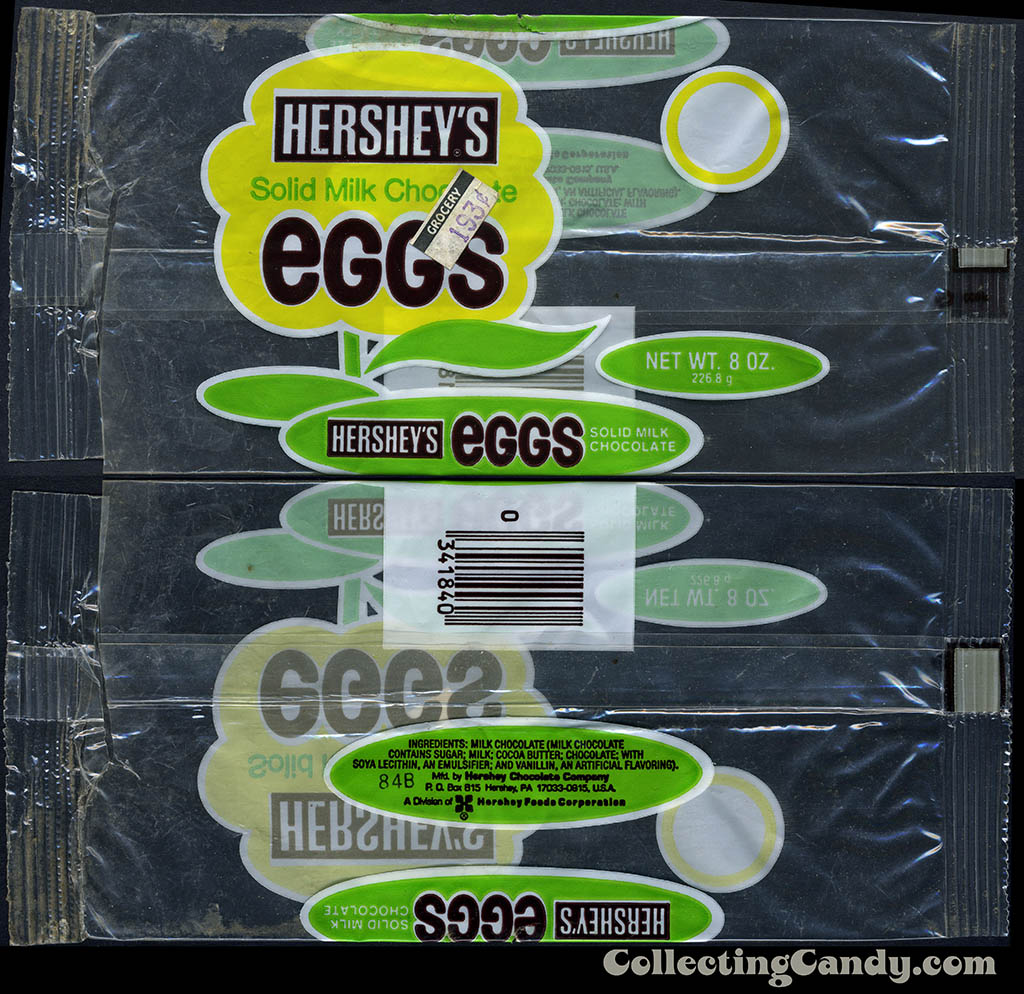 That package would have been filled with individually-wrapped, egg-shaped pieces of chocolate.  I’m fortunate to have a Sunday circular coupon ad that shows what a full package of these looked like: 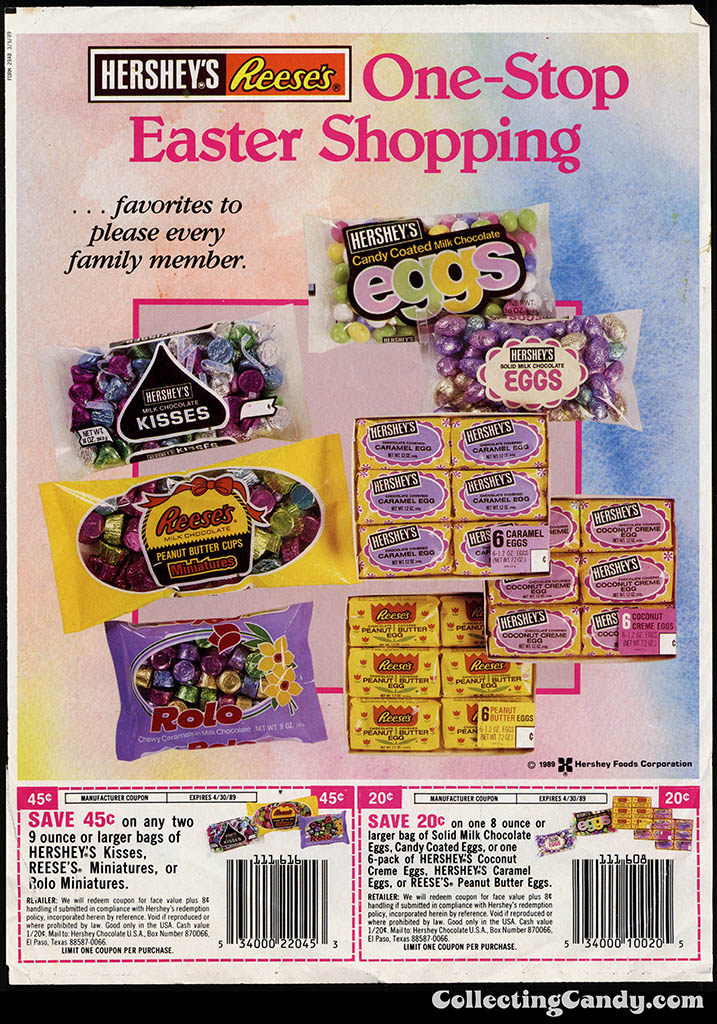 As you can see Hershey’s Milk Chocolate Eggs and Candy-Coated Chocolate Eggs have been a staple for a generation and I’d bet that many readers have childhood memories of them.  Jumping forward a bit into the 1990’s, I have a smaller package for the candy-coated variety that features a new graphical flower design: 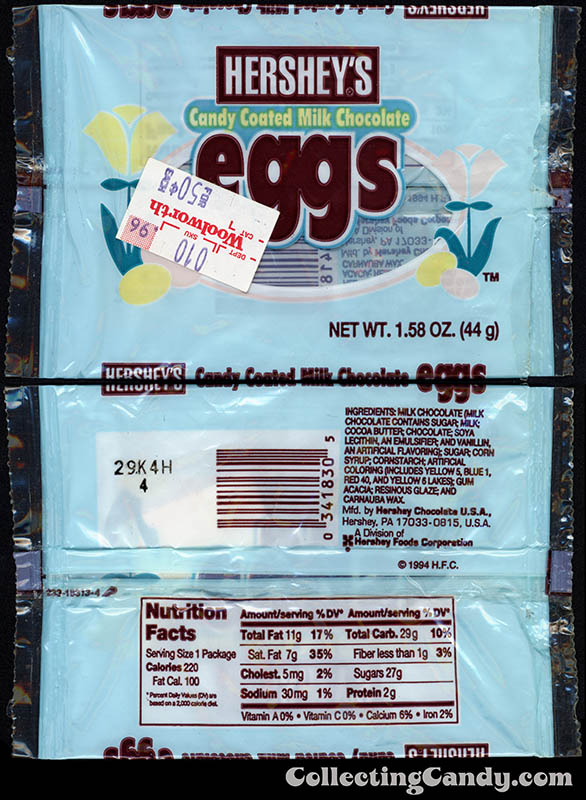 Early on, the packaging for Hershey’s Eggs was mostly transparent, allowing the foil-wrapped contents to do most of the work of catching consumers’ attention.  But as time went on, more of the package was becoming opaque with distinctive graphics added, though a window was still left to showcase the contents.   The flower-theme design on that 1995 pack was largely carried over into the early 2000’s with flowers and an illustrated Easter bunny included on the 11 oz package size:

A different look was used for Hershey’s Extra Creamy Milk Chocolate Eggs at the time: 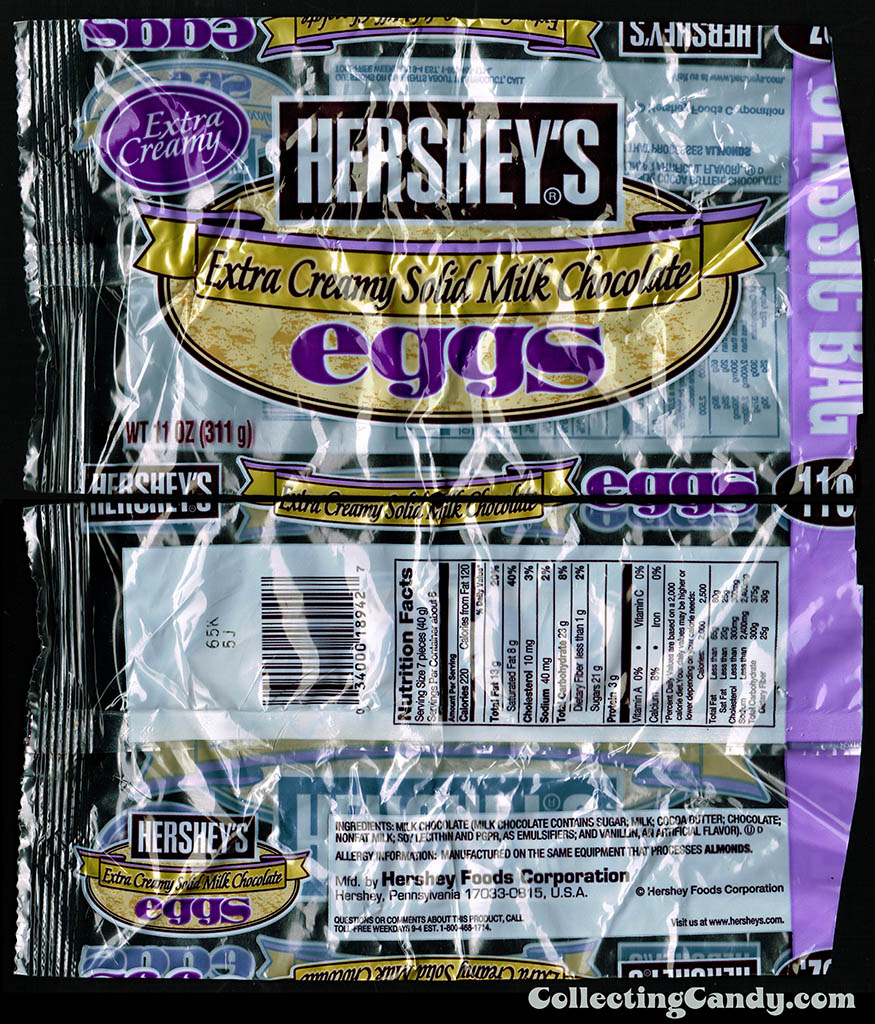 By the end of the decade, Hershey decided to up the color palette for their Hershey’s Egg packaging, as you can see in the following two examples: 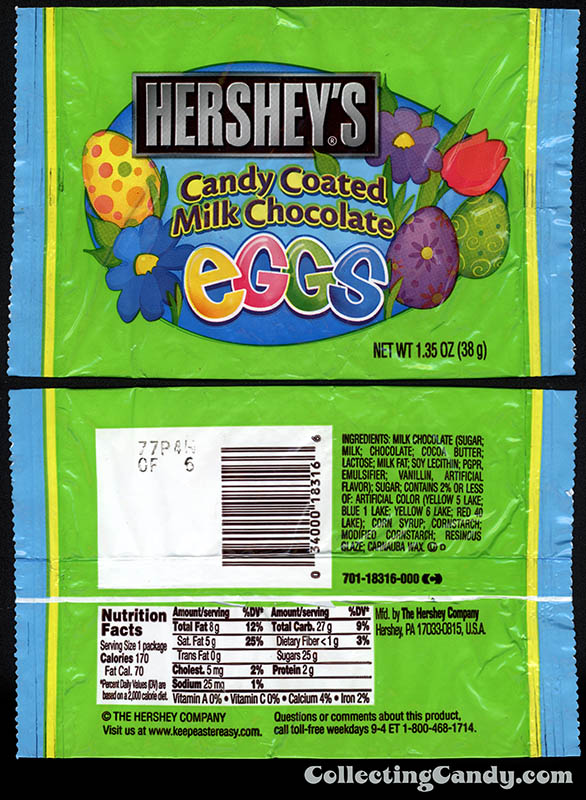 For 2013 a new unifying packaging design would be introduced across Hershey’s Eggs lineup, giving each a distinctive color background as well as an illustrated spring bloom revealing what the contents looked like.  The look was carried over this year and I made a concerted effort to pick up an example of each variety package – I found six altogether and here they are: 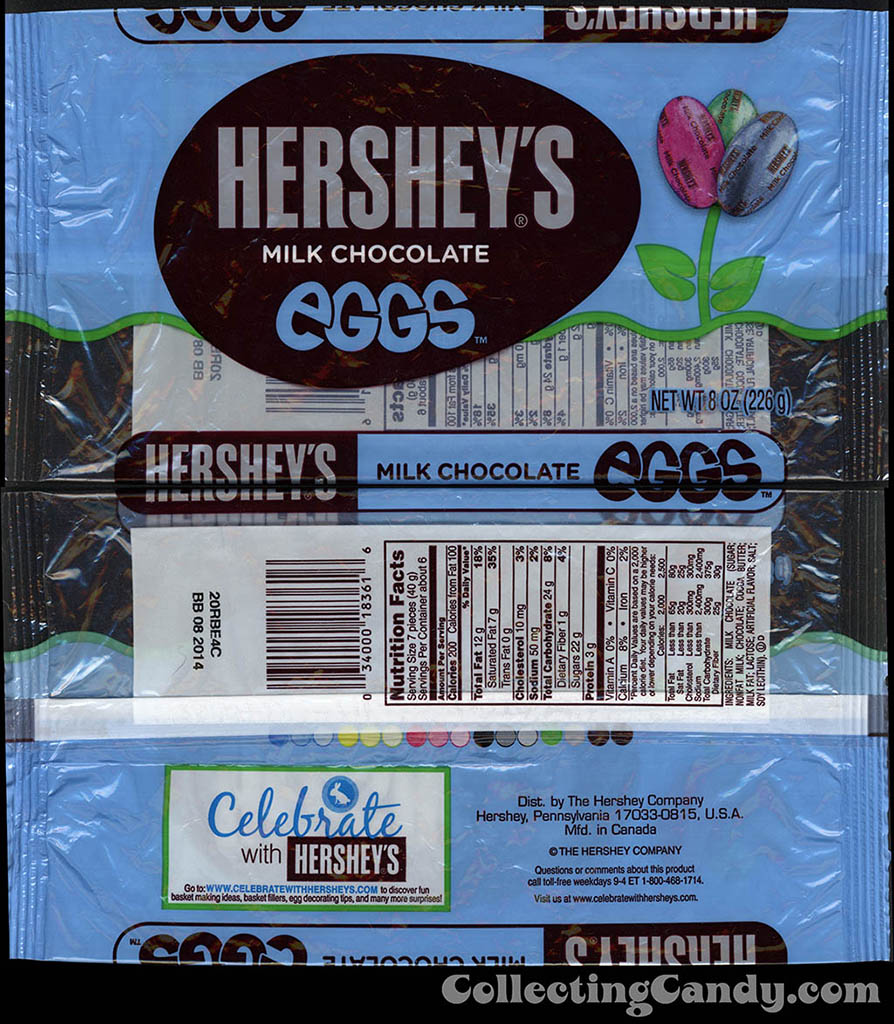 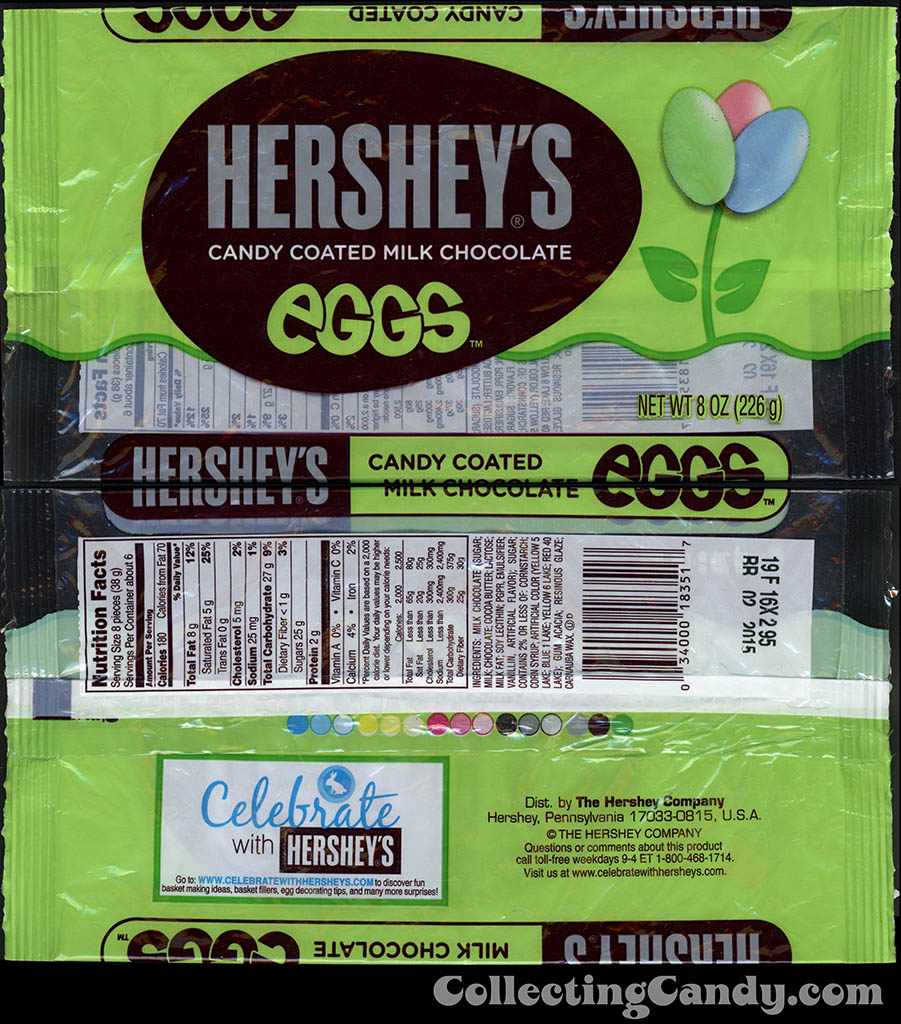 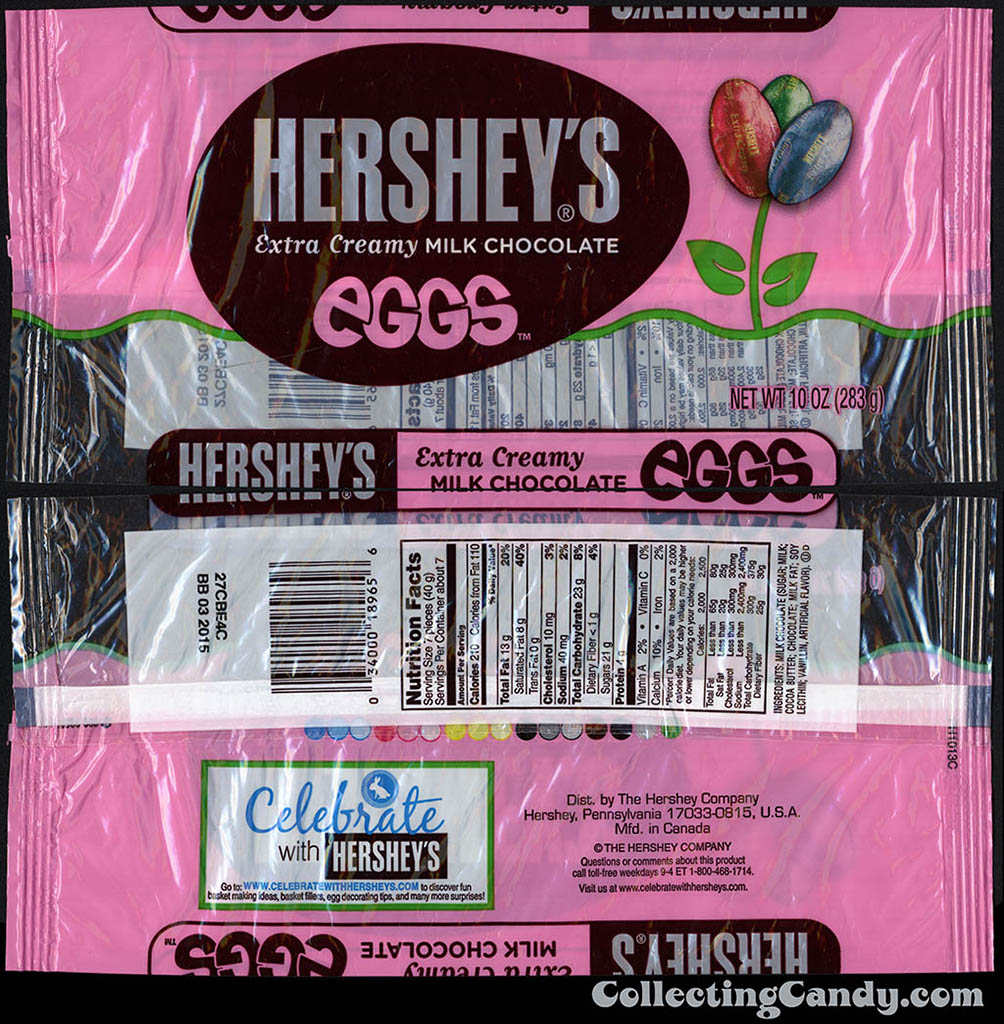 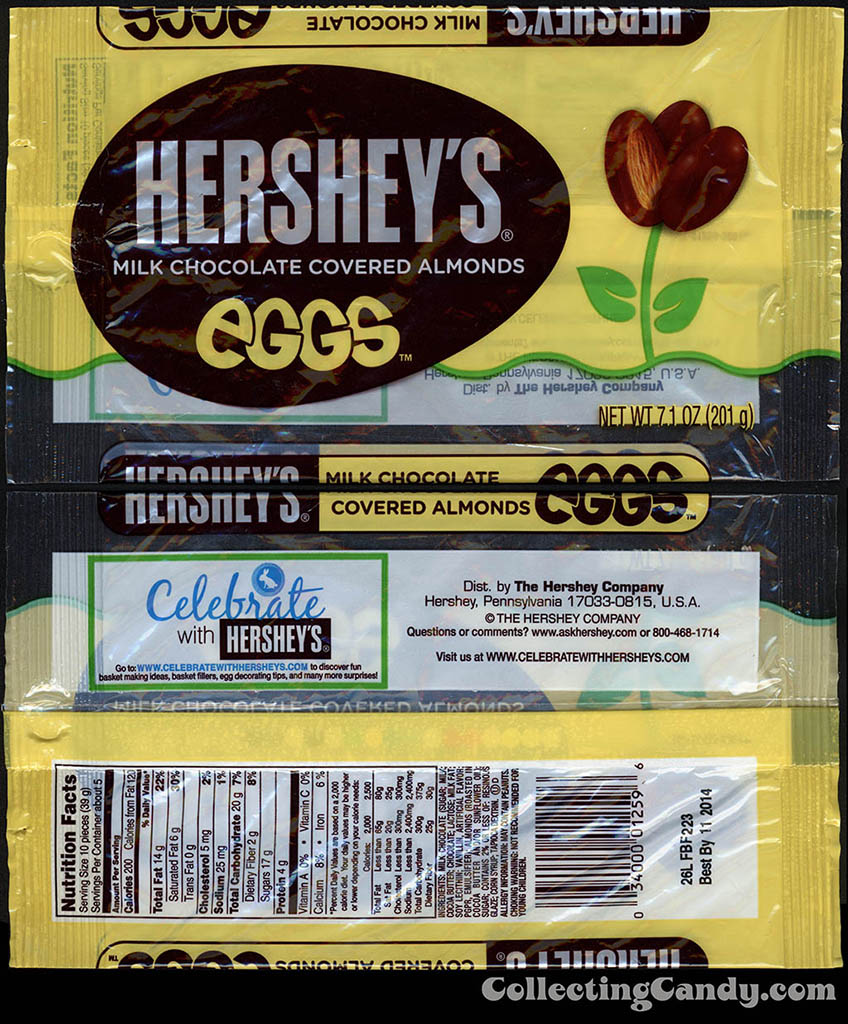 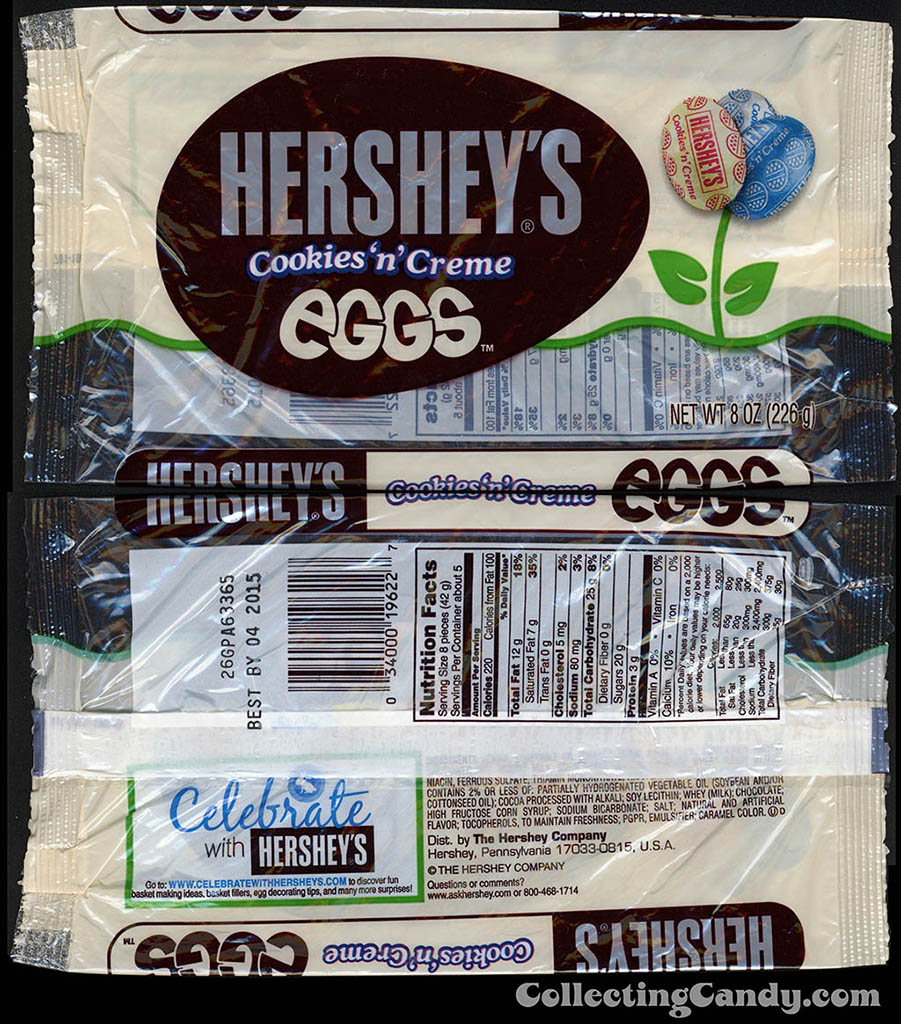 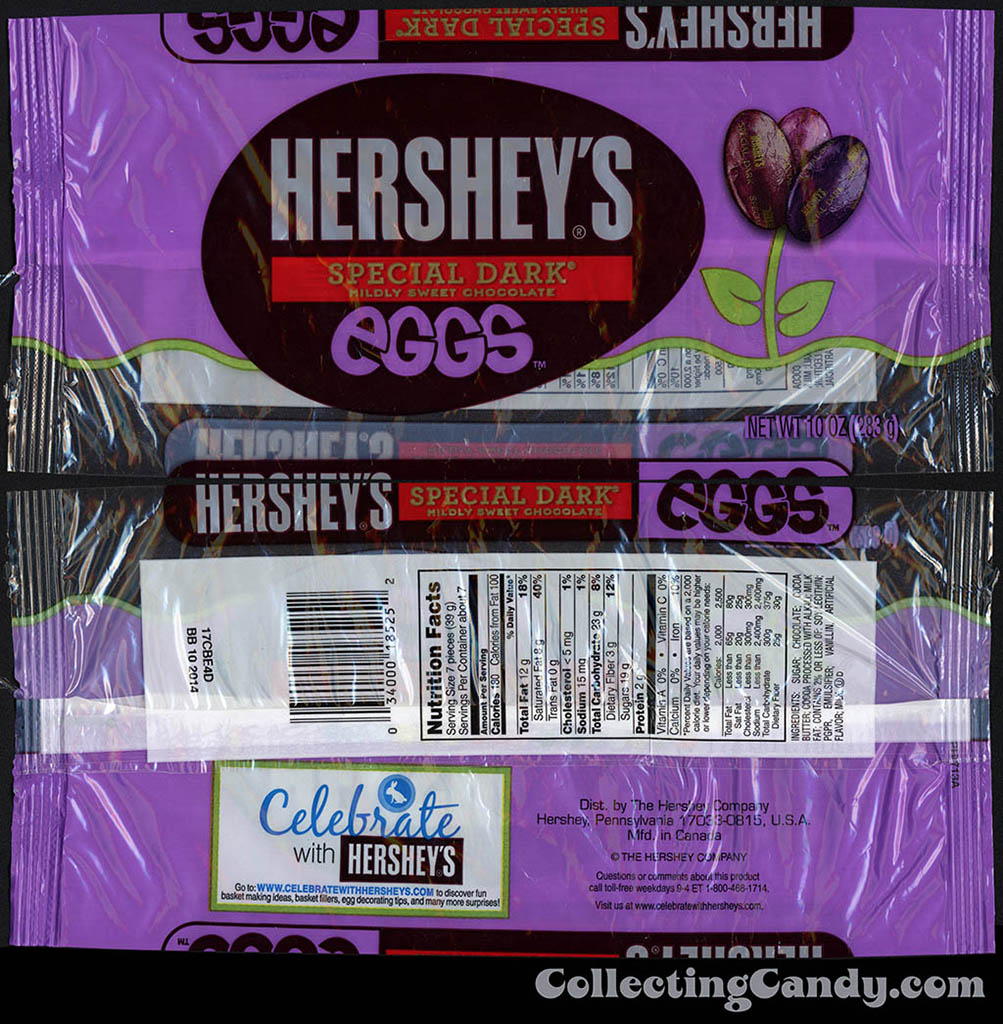 Hershey’s Egg-shaped Reese’s offering even got the unified packaging design: 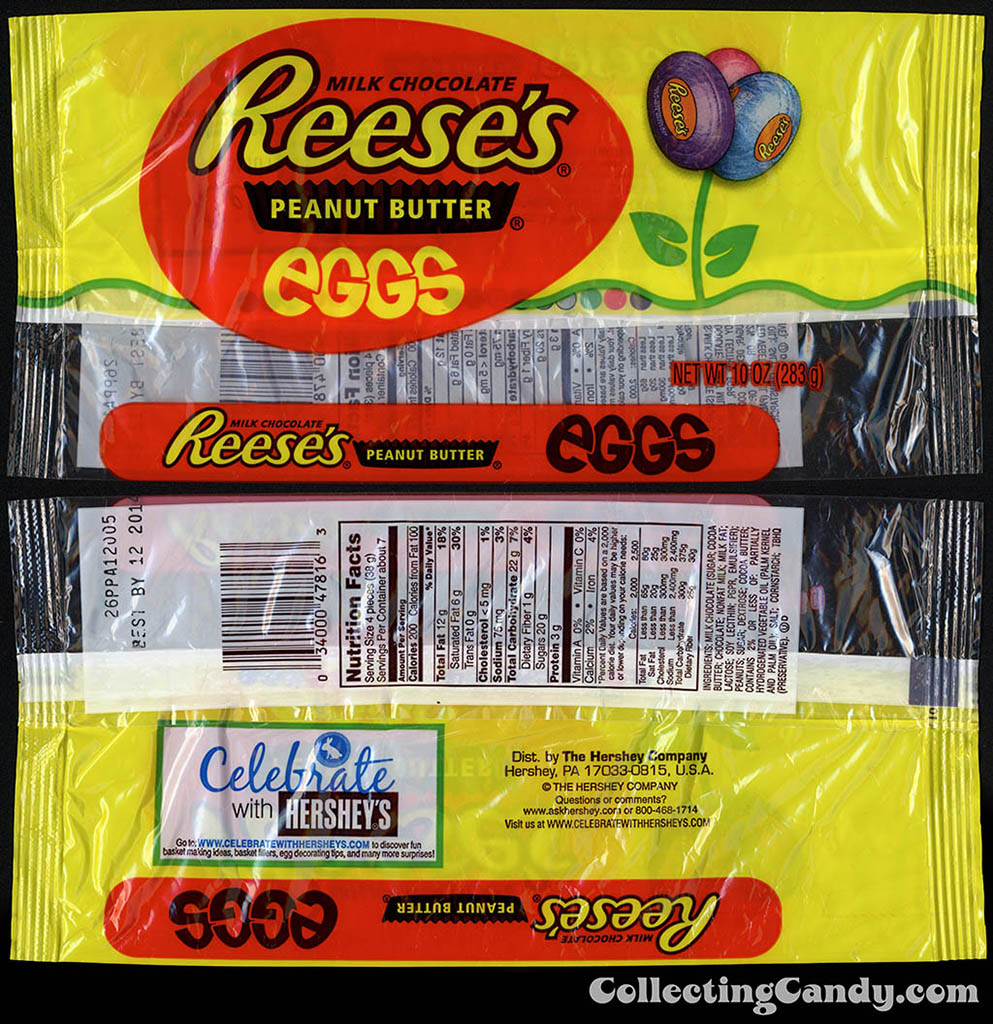 That’s a total of seven different packages – it’s quite the variety.  But it’s not all of them in this style.

As a collector there are instances when I’m shopping that I will consider purchasing an item for my candy collection, but instead I leave it on the shelf.  Many times I’ll have the opportunity to go back and get that piece later in the season or even the following year but that’s not always the case.

Last year I was at my local Target store and noted an unusual flavor of Hershey’s Eggs I’d never seen before – Candy-Coated White Chocolate.  I’m pretty sure they were a Target store-exclusive as I never found them anywhere else.  I assumed that being a new flavor, they’d return this year in wider distribution but they never did – not even back at Target – so my collection remains incomplete.

And while I didn’t buy those white chocolate Hershey Eggs that day, I did snap this photo so at least I can remember what they looked like: 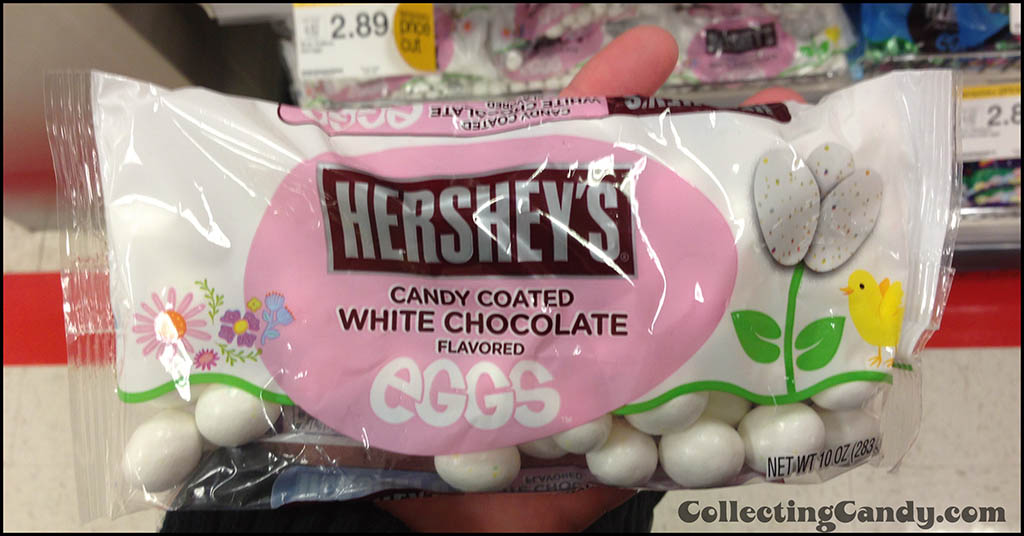 I love the fact that the package colors for the While Chocolate Eggs are sort of an albino version of those found on the rest of the line, and the addition of the yellow chick is a nice touch.   I’m kicking myself a little for not picking up that package last year – but all I can do is hope they bring them back for Easter 2015.

That’s everything I’ve got on this year’s Hershey’s Eggs, though I have one last piece to share.  Apparently up north, Hershey Canada brands their small candy coated Hershey Eggs as Eggies.  I picked up a pack the last time I was up in Canada and here it is:

And that’s everything for day one of our week-long Easter coverage.  See you next time!

A New York City based writer, editor and sometimes actor. After spending much of the 1990′s in the comic book business helping tell the stories of Marvel Comics’ X-Men as series editor, he has since split his time between developing his own entertainment properties while still consulting and working on others. Having been described as “the Indiana Jones of lost and forgotten candy”, Jason is one of the country’s premier candy collectors and historians with his discoveries appearing in countless blogs, magazines, newspaper articles, and books. Always happy to share his knowledge and unique perspectives on this colorful part of our popular culture, Jason has consulted with New York’s Museum of Food and Drink and has also been a featured guest on Food Network’s Heavyweights, France’s M6 Capital, and New York’s TheActionRoom.com. My Google Profile+
View all posts by Jason Liebig →
This entry was posted in 1980's, 1990's, Canadian, Chocolate, Easter, Hershey, Holiday and tagged candy collecting, candy collection, candy collector, candy wrapper collection, candy wrapper collector, collectible, collecting candy, confectionery, confections, Easter, Eggs, Hershey's, Hershey's Eggs, holiday, packaging, spring, sweets, vintage candy wrapper, wrapper. Bookmark the permalink.