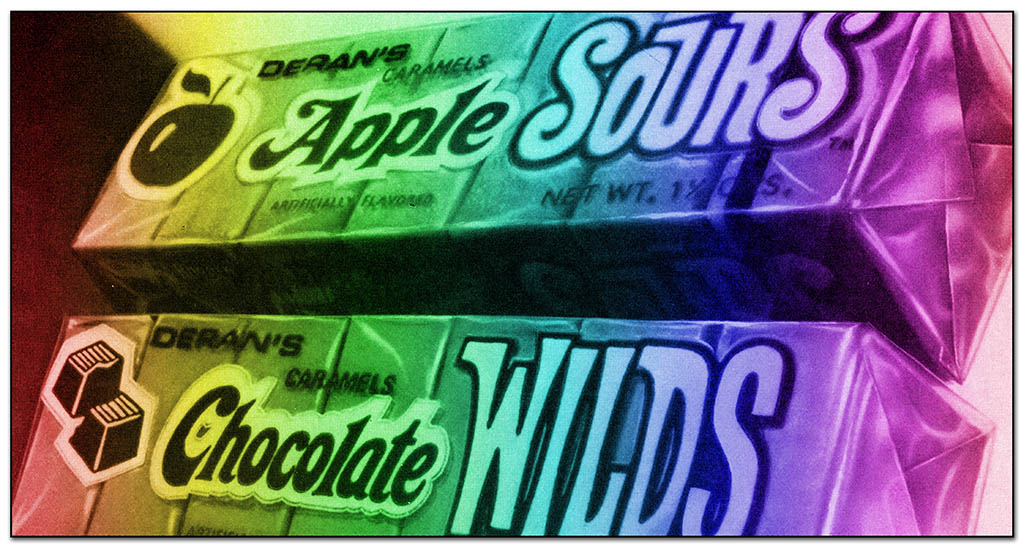 Back in the 1970’s the Deran Confectionery Company of Cambridge, Massachusetts had a line of flavored caramels sold under the name Wilds.   Deran’s Wilds disappeared from store shelves decades ago but today I’m happy to be presenting CollectingCandy.com’s exclusive coverage of them  – you won’t find anything written about these anywhere else online.  So let’s get to it and take a look at a sweet treat not seen since the 1970’s: Deran’s Wilds!

The earliest evidence I have of Deran’s Wilds comes from a 1972 candy trade ad. 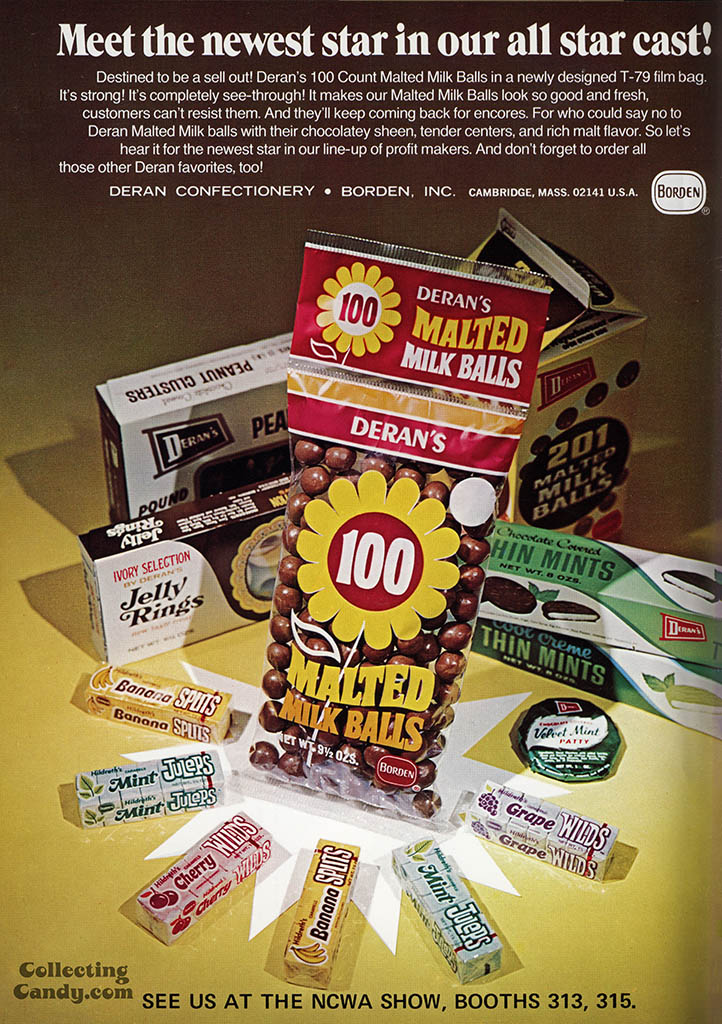 Sold under their parent company Borden, Deran showcases a number of flavors here and it’s notable that “Wilds” is one of a few names utilized for them.  So you have Cherry and Grape Wilds but also Banana Splits and Mint Juleps.  Even though those other names are used, I consider the Wilds name to encompass the entire flavored caramel lineup.

Also of note from this first trade ad is that upon close examination it’s evident that the packages sport a different company name – Hildreth’s.  My guess is that Deran had only recently acquired the product lineup or that Borden had folded Hildreth’s operations and brands into Deran Confectionery:

Deran released a follow-up advertisement to the candy trade just a few months later, showcasing two new flavors; Chocolate Wilds and Apple Sours.  By this point, the Hildreth’s name had been replaced by Deran’s on the packages: 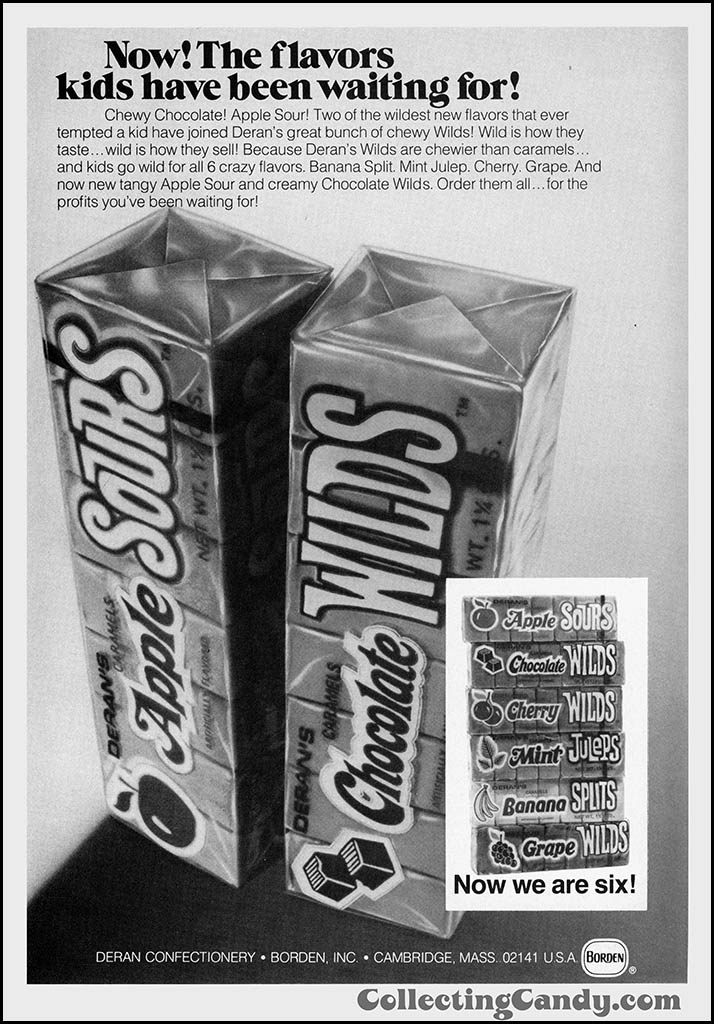 I don’t recall trying Deran’s Wilds when I was a kid so I can’t say exactly what they were like but I assume they were a similar product and a competitor to the likes of Now & Later and even Starbust fruit chews.

I’m fortunate to have two wrapper examples to showcase today, coincidentally enough they are the pair of Wilds flavors introduced in that previous ad; Chocolate and Apple: 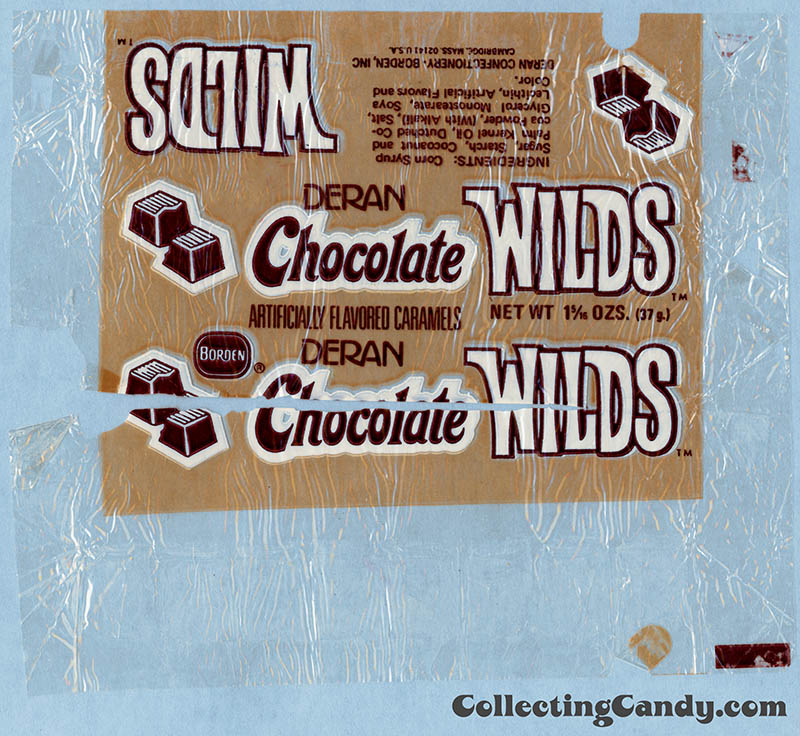 The next wrapper is for the apple flavor and it should be noted that in the 1972 trade ad, these were called Apple Sours but by the time this wrapper came out, the name changed to Sour Apple Wilds: 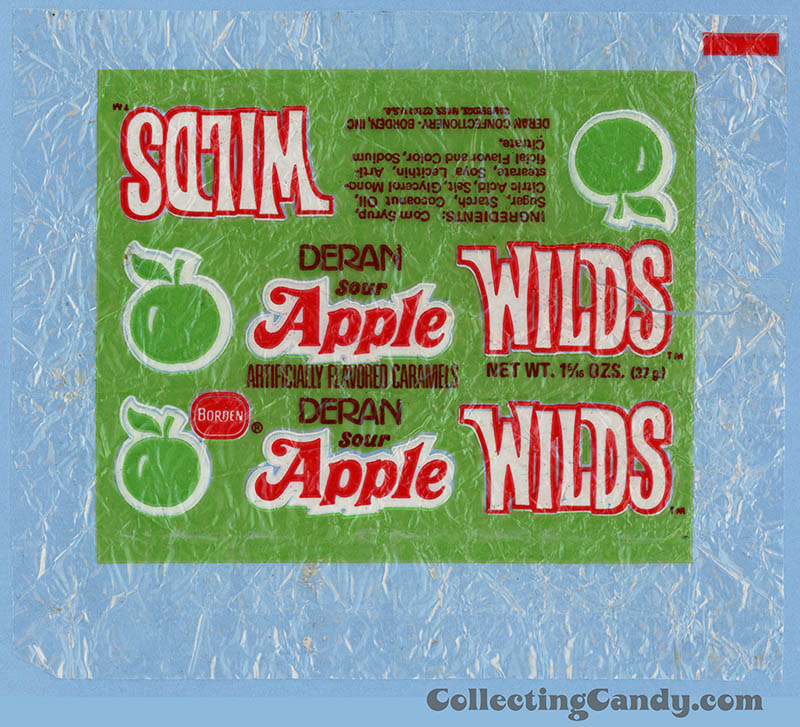 It’s always fascinating and fun to uncover a product like this, one that was around for a number of years but has since been almost entirely forgotten and whose history had seemingly been lost to time.

It appears that Necco (maker of Necco Wafers and so much more) acquired most or all of the assets of Deran at some point, as they currently produce Mighty Malts, which are also a former Deran Confectionery product.  Maybe Necco has more information on Wilds somewhere in their vaults?

Does anyone out there remember Deran’s (or Hildreth’s) Wilds?  If you do, please leave a comment as I’d love to hear what you thought of them.

For now, that’s all I have to share on this flavorful treat from out of the 1970’s – Deran’s Wilds!

A New York City based writer, editor and sometimes actor. After spending much of the 1990′s in the comic book business helping tell the stories of Marvel Comics’ X-Men as series editor, he has since split his time between developing his own entertainment properties while still consulting and working on others. Having been described as “the Indiana Jones of lost and forgotten candy”, Jason is one of the country’s premier candy collectors and historians with his discoveries appearing in countless blogs, magazines, newspaper articles, and books. Always happy to share his knowledge and unique perspectives on this colorful part of our popular culture, Jason has consulted with New York’s Museum of Food and Drink and has also been a featured guest on Food Network’s Heavyweights, France’s M6 Capital, and New York’s TheActionRoom.com. My Google Profile+
View all posts by Jason Liebig →
This entry was posted in 1970's and tagged Borden, candy collecting, candy collection, candy collector, candy wrapper collection, candy wrapper collector, caramel, collectible, collecting candy, confectionery, confections, Deran, Deran's, fruit chew, Hildreth's, Necco, packaging, sweets, vintage candy wrapper, Wilds, wrapper. Bookmark the permalink.

9 Responses to From out of the 70’s – Deran’s Caramel Wilds!