Celebrating Chinese New Year 2014! The Year of the Horse!

Today is January 31st, 2014 – so here on CollectingCandy.com we want to recognize the celebration of the Chinese New Year!  For those that don’t know, in the 12-year cycle of animals that make up the Chinese Zodiac, today marks the beginning of the year of the Horse.  But on the site today we’ll be marking the holiday with limited edition Chinese New Year Hershey Kisses from Canada along with an array of other related and super-cool goodies!

Not long ago, I asked my artist pal Glen Mullaly up in Canada to do some confectionery reconnaissance for me to see if there was anything unusual offered up there that he thought I might like.  I was surprised when he sent me photos of a pair of special edition candy offerings designed to mark the Chinese New Year.  I’d never seen limited editions for that holiday here in the United States, but in Canada they had them and boy were they neat.  Upon learning of my excitement, Glen grabbed a couple and sent ’em my way.

My favorite of the two is the ornate box Glen found that was created for the Chinese New Year edition Hershey’s Kisses.  Here are a few shots I took of it: 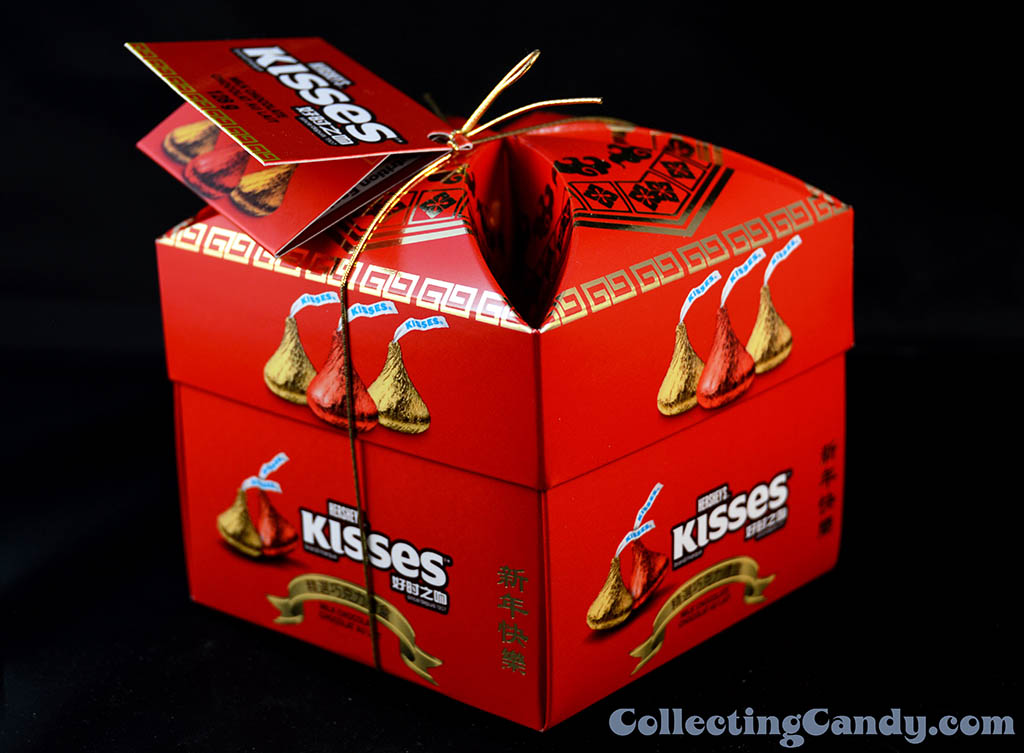 Made of a glossy, deep red cardboard, the box design is quite gorgeous with striking gold foil details: 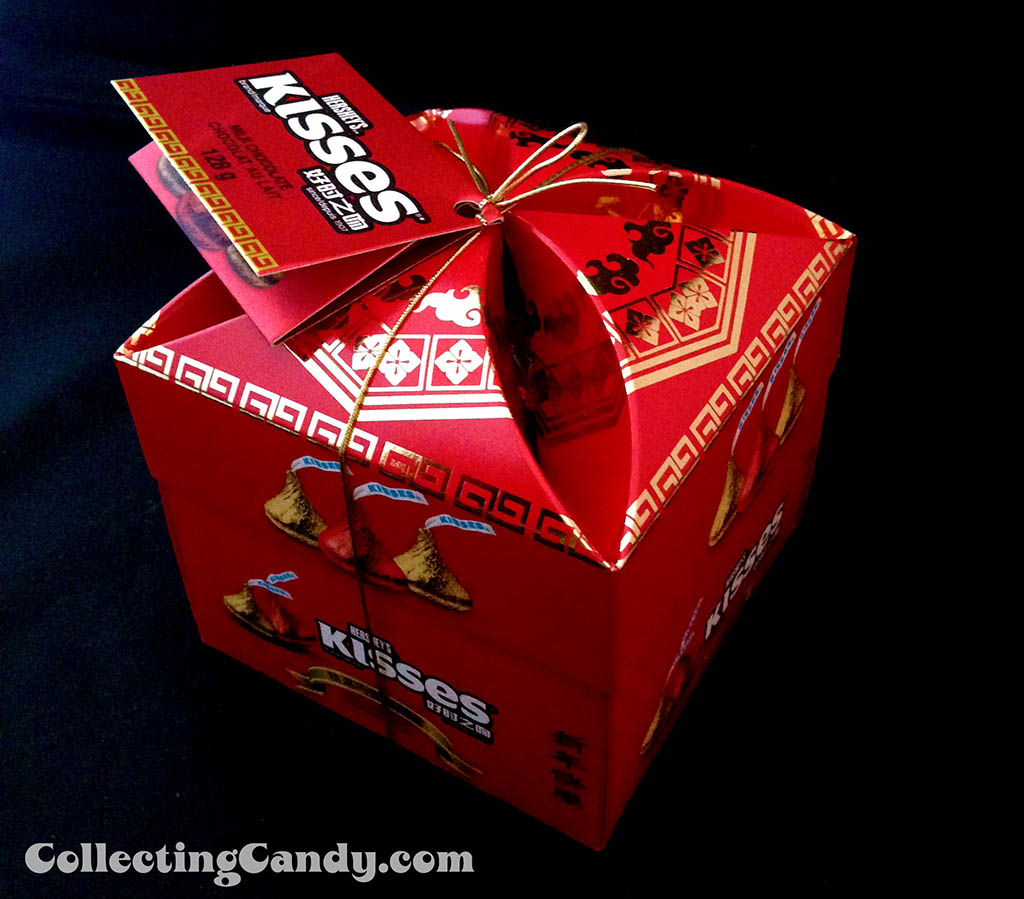 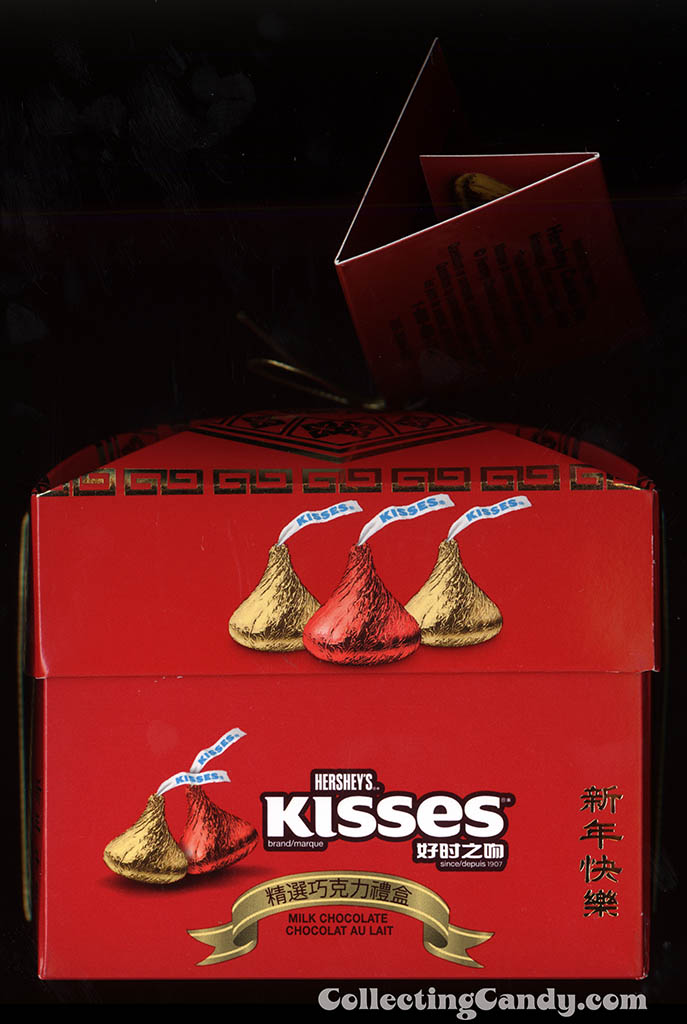 The other piece Glen found and sent my way was this special Chinese New Year edition Kit Kat Orange 8-pack. 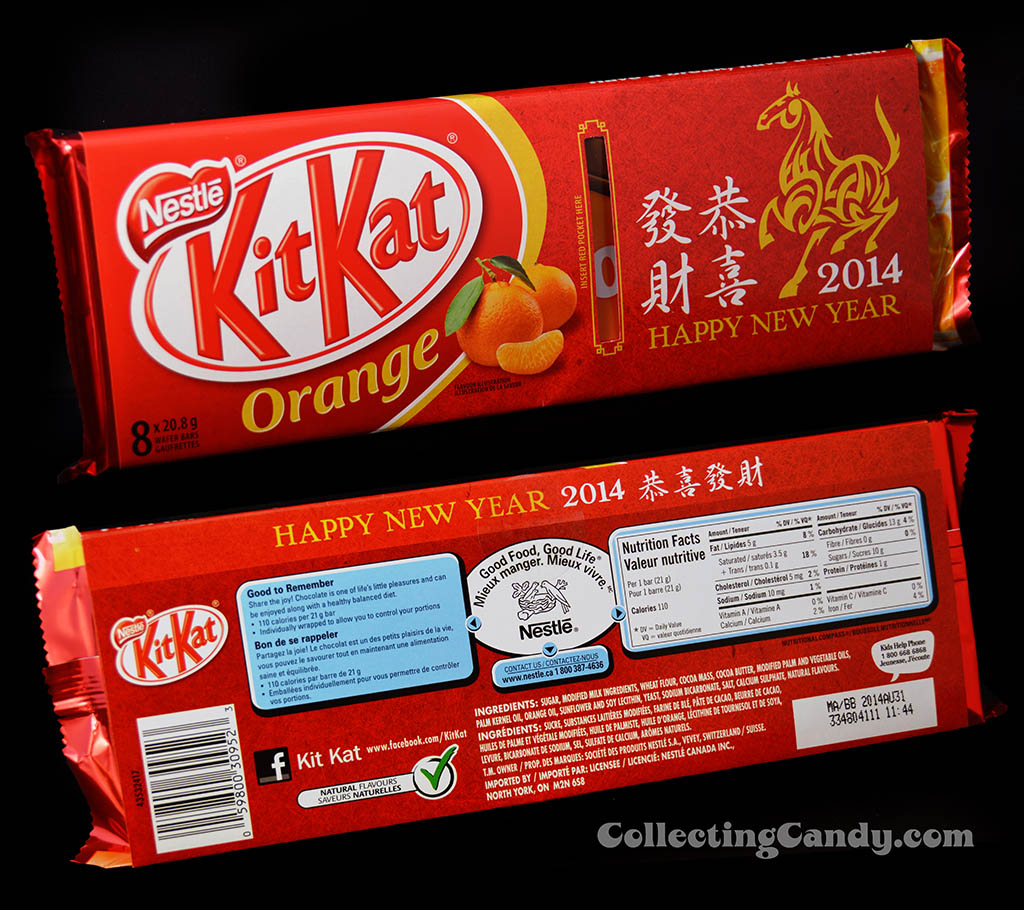 Notice the cutaway slot located at the center on the pack’s outer sleeve – that’s designed for the “red envelope” or “red pocket”, a traditional form of gift giving during the Chinese New Year holiday.  Here’s a scan of the thin cardboard sleeve after I removed it – it features the beautiful graphics utilized for today’s title image: 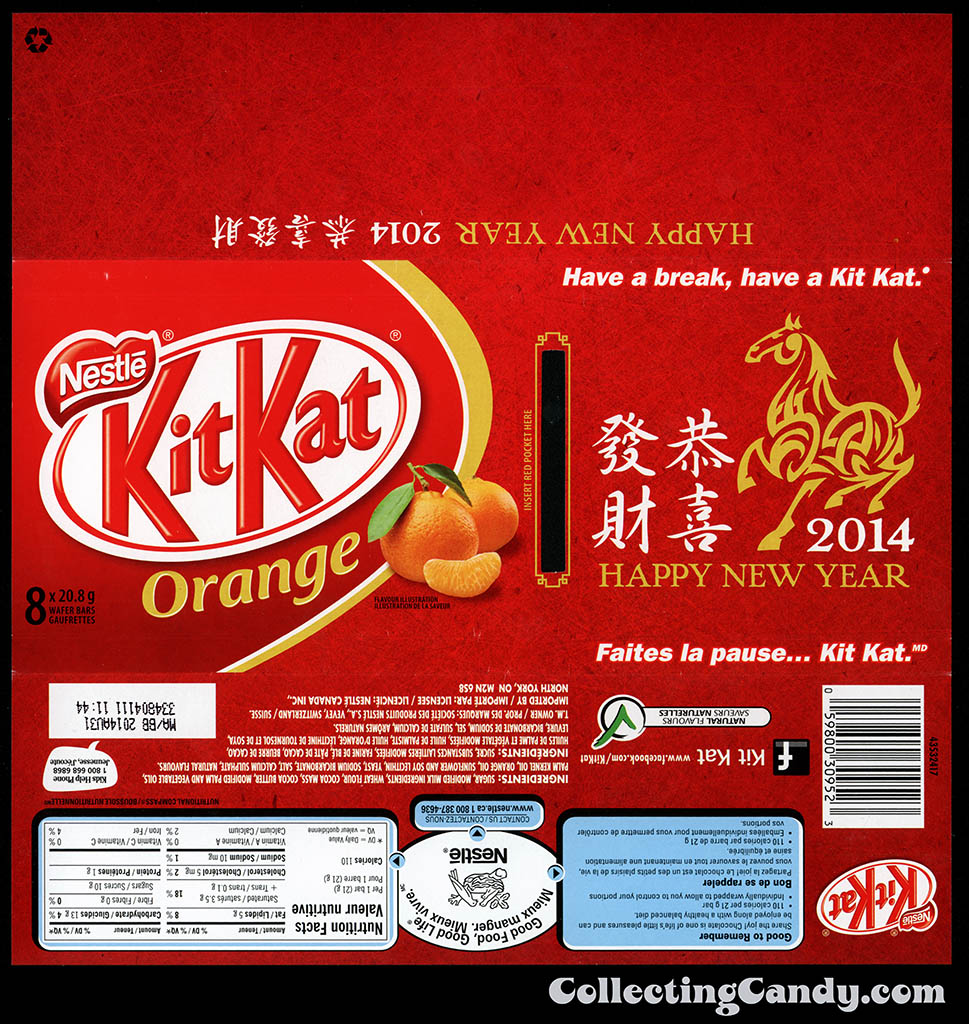 Here’s a scan of the inner pack after being opened and flattened: 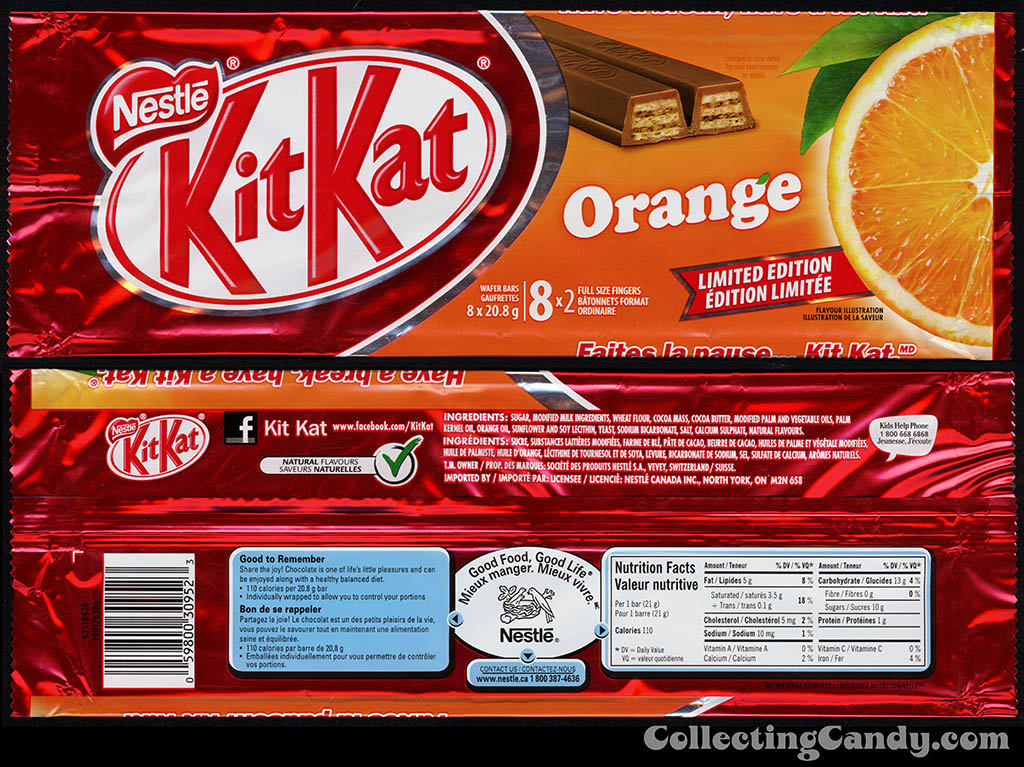 The contents of the 8-pack surprised me as it revealed eight 2-stick Kit Kats, each packed up old school – first with the chocolate wrapped in foil and finishing with a graphical paper outer wrapper.   Here’s a scan of one of those wrappers:

So Happy Chinese New Year to all those that celebrate it – I hope the Year of the Horse is going to be a great one!

Since we are on a Chinese theme today, I wanted to continue with a series of pieces from my collection that came from China.  Some of my favorite candy packages to collect are brands I know offered in the native languages of the countries they were sold in.  One of my favorite pieces in my collection is an M&M’s pack from the Middle East.

With the following candy pieces, I find them especially appealing due to the Chinese characters used.

Last year, I found it fascinating to learn a little about M&M/Mars’ history in Russia – so I wondered if it was a similar story here.  After a quick bit of research, I was able to determine that Mars established its Chinese subsidiary in 1994.

Here are some of the Chinese language packs in my collection: 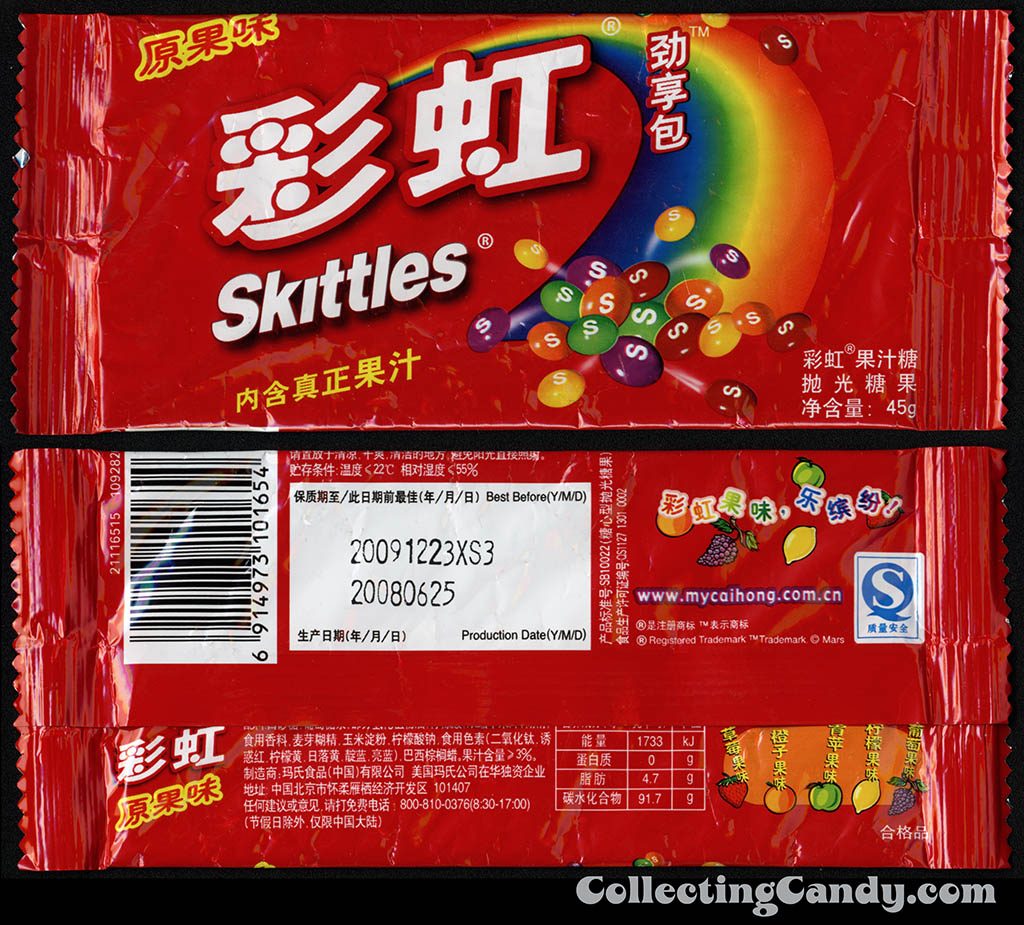 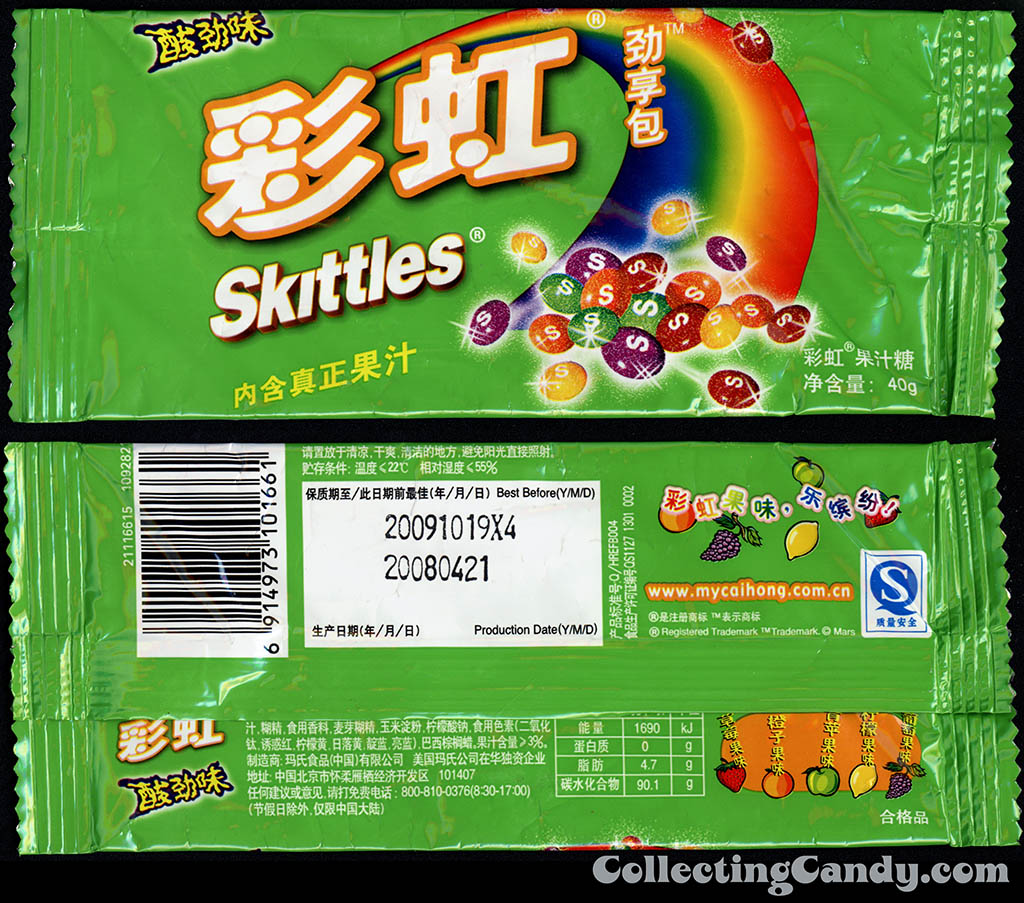 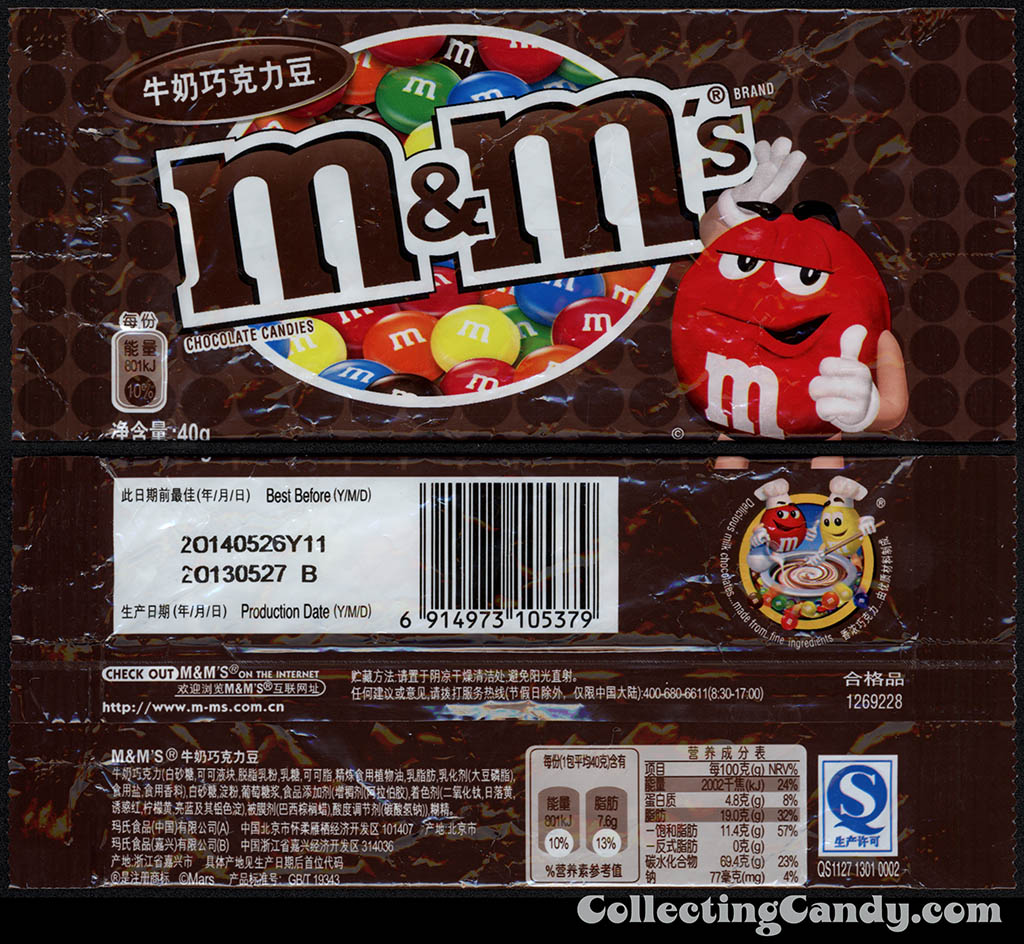 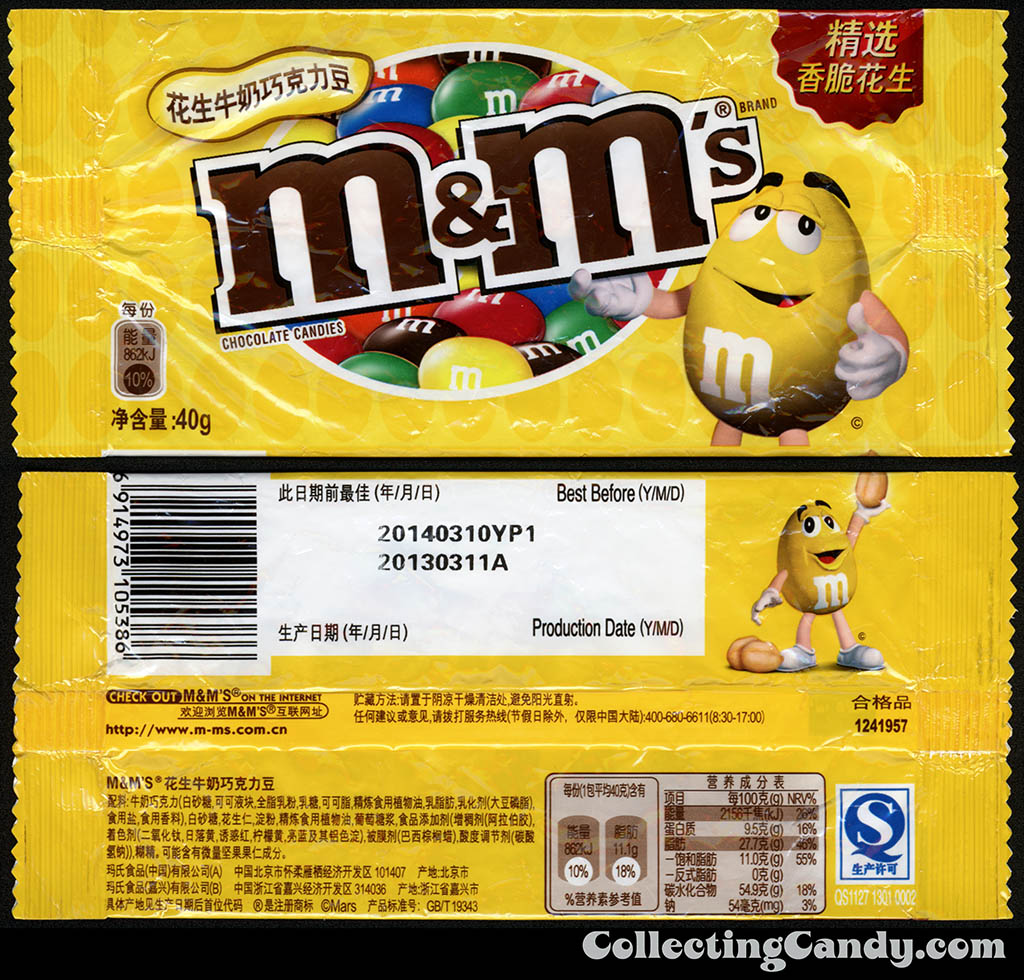 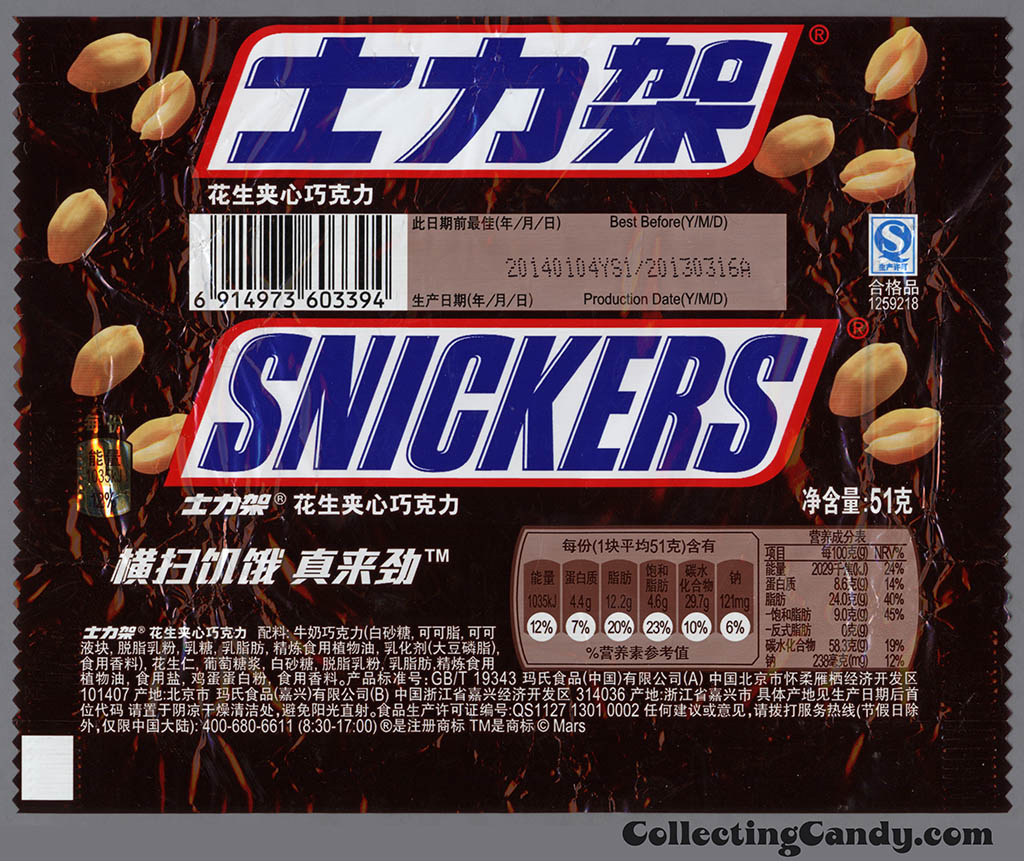 Mars isn’t the only western confectionery company making inroads into China – Hershey has also been aggressive in getting its product into Chinese consumer’s hands: 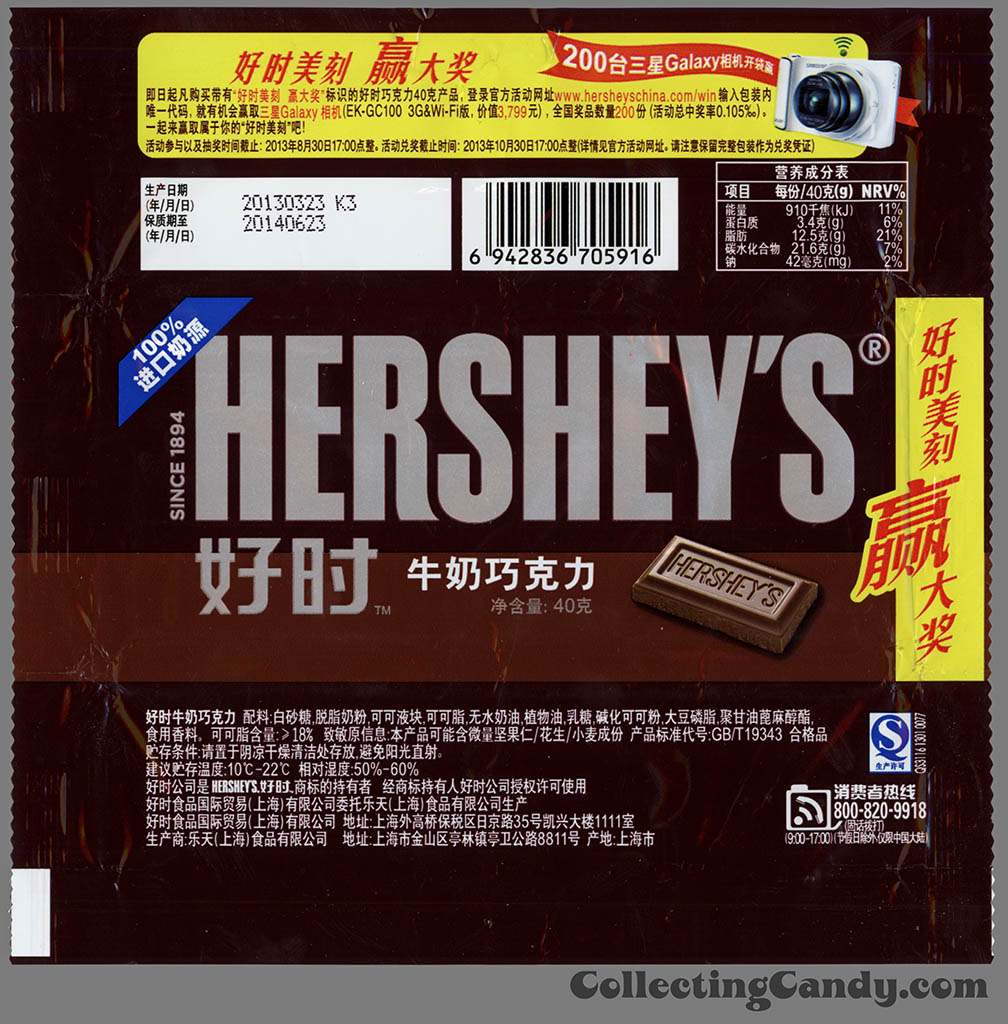 There’s something really cool about the ornate Chinese characters that makes even a plain Hershey wrapper something groovy to look at.

If anyone out there has traveled abroad and saved candy packages like these, I’d love to hear about it.  They make for pretty neat pieces to save.

That’s everything for today – I hope you dug it. 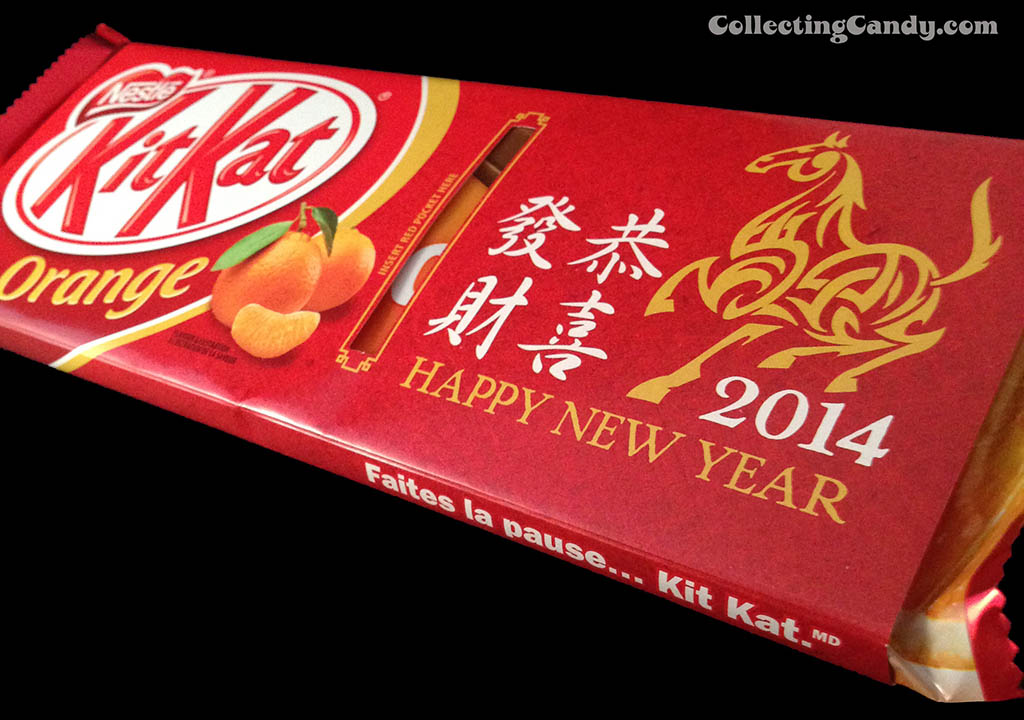 A New York City based writer, editor and sometimes actor. After spending much of the 1990′s in the comic book business helping tell the stories of Marvel Comics’ X-Men as series editor, he has since split his time between developing his own entertainment properties while still consulting and working on others. Having been described as “the Indiana Jones of lost and forgotten candy”, Jason is one of the country’s premier candy collectors and historians with his discoveries appearing in countless blogs, magazines, newspaper articles, and books. Always happy to share his knowledge and unique perspectives on this colorful part of our popular culture, Jason has consulted with New York’s Museum of Food and Drink and has also been a featured guest on Food Network’s Heavyweights, France’s M6 Capital, and New York’s TheActionRoom.com. My Google Profile+
View all posts by Jason Liebig →
This entry was posted in Canadian, Chocolate, Hershey, Holiday, M&M's, Mars and tagged Canada, Canadian, candy collecting, candy collection, candy collector, candy wrapper collection, candy wrapper collector, China, Chinese, Chinese New Year, collectible, collecting candy, confectionery, confections, foreign, packaging, sweets, vintage candy wrapper, wrapper. Bookmark the permalink.

1 Response to Celebrating Chinese New Year 2014! The Year of the Horse!