One of the more clever uses of cellophane in candy packaging had to be when confectioners started utilizing the protective wrapping as a kind of catch-all canvas for lollipops.  By printing up a custom cellophane wrap, they could turn that lollipop into whatever design or fad they thought would sell best.   Such was the case with Spangler’s Zodiac Pops.

In the wake of the counter-culture revolution of the 1960’s, the signs of the Zodiac were more than just the basis of a pickup line – they were a fashion statement and pop-cultural phenomenon.  I recall my mother placing a good bit of Zodiac-emblazoned artwork around our house in the 1970’s and as a child I found the imagery compelling and curious.   Having experienced that popularity firsthand, I was not surprised when I recently discovered that during this era, the Spangler candy company produced a line of Zodiac-themed “Big Pops”.

I would imagine that those Spangler Zodiac Pops looked pretty groovy on shelves.  I’d love to find some of the Zodiac cello wrappers for my collection, though I’d guess that not many survived as opening the candy would have resulted in a good shredding of the cellophane material.

Though I may never find actual examples of the Zodiac Pops, I was able to get a glimpse of what they looked like in color, as they were included on a two-sided Spangler sales flyer I recently picked up.  This flyer also features Spangler’s early 1970’s lineup of Super Pops and Big Suckers – all using the printed cellophane wrapping to provide them with their identity: 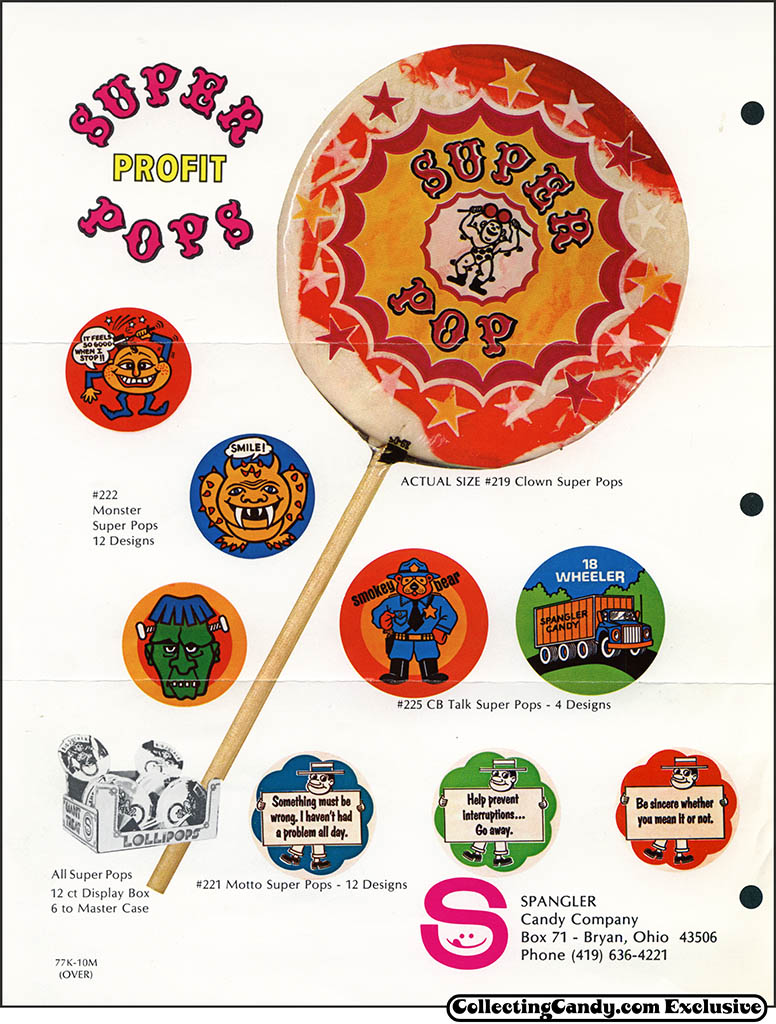 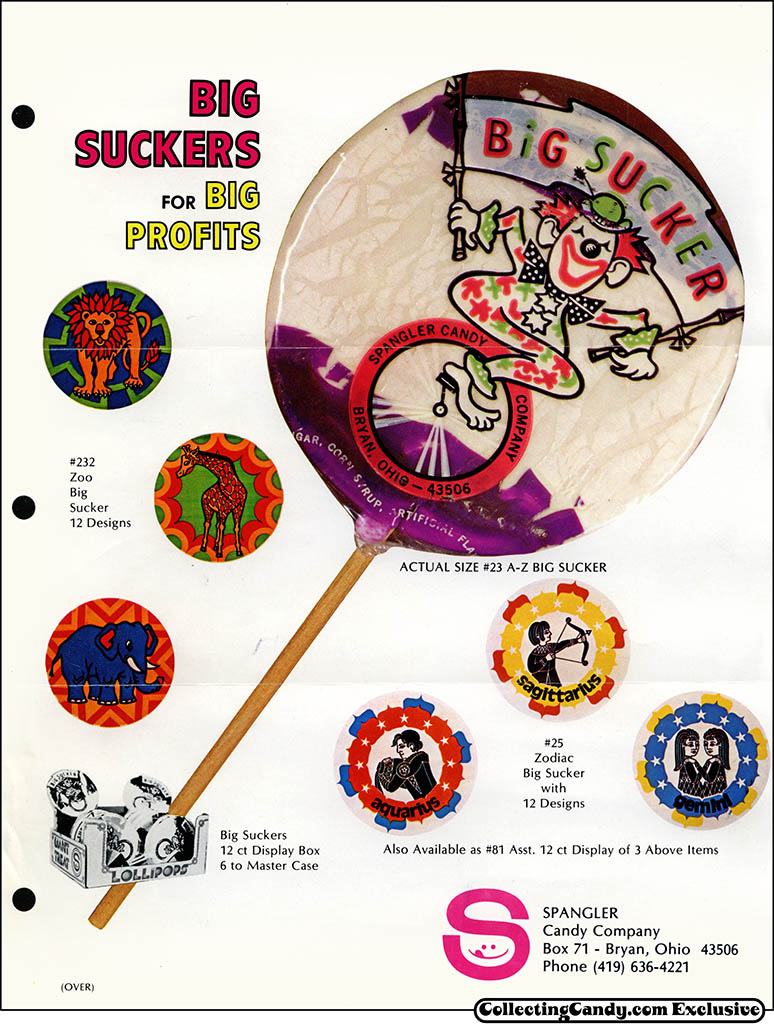 It’s great to be able to see that trio of Zodiac Pops wraps in color.  It’s also interesting to note the variety and scope of the other styles they were using.  For instance, the “CB Talk Super Pops” are a great reflection of the huge CB Radio cultural fad of the 1970’s.

Though it might seem a bit antiquated by today’s standards, this method of packaging lollipops is still used today.  I found examples of it at a Walgreens just a few months ago, with a pair of pops sold under their private label Nice! brand: 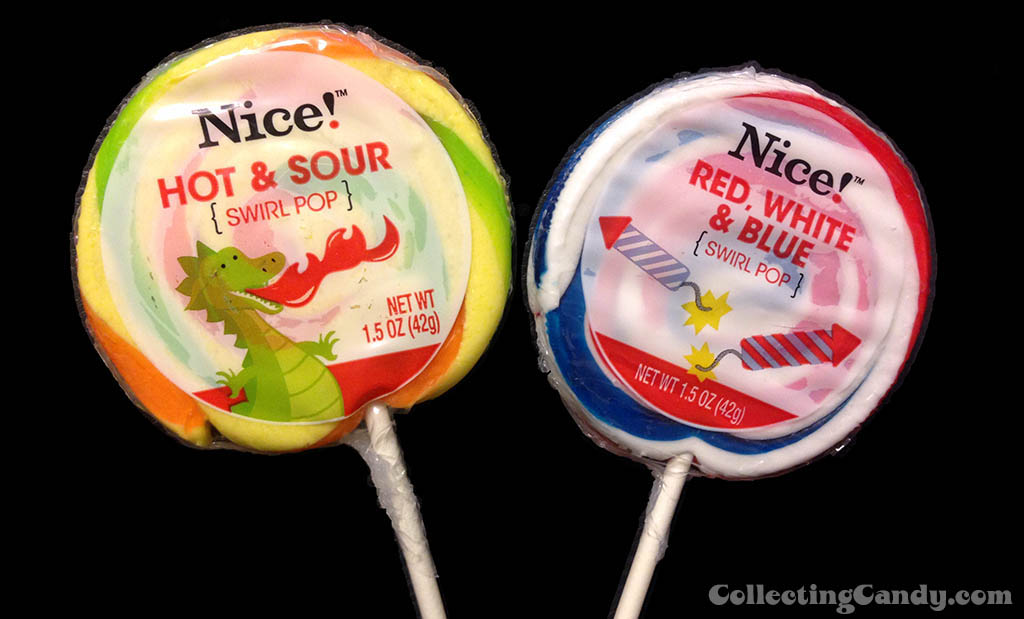 It’s remarkable how easy it is to transform a colorful lollipop into one that reflects whatever character or theme you might want.  But even unwrapped, the canvas is far from plain, and still delicious: 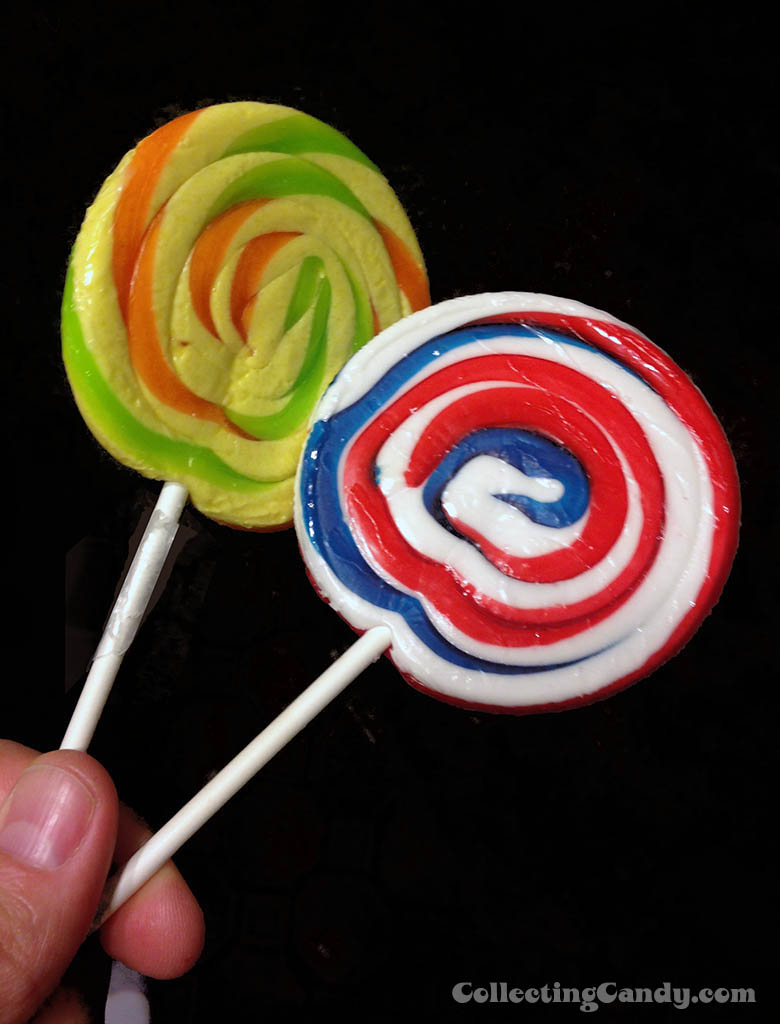 And that’s everything for today’s look back at Spangler’s 1970’s Zodiac Pops (and Super Pops and Big Suckers).

A New York City based writer, editor and sometimes actor. After spending much of the 1990′s in the comic book business helping tell the stories of Marvel Comics’ X-Men as series editor, he has since split his time between developing his own entertainment properties while still consulting and working on others. Having been described as “the Indiana Jones of lost and forgotten candy”, Jason is one of the country’s premier candy collectors and historians with his discoveries appearing in countless blogs, magazines, newspaper articles, and books. Always happy to share his knowledge and unique perspectives on this colorful part of our popular culture, Jason has consulted with New York’s Museum of Food and Drink and has also been a featured guest on Food Network’s Heavyweights, France’s M6 Capital, and New York’s TheActionRoom.com. My Google Profile+
View all posts by Jason Liebig →
This entry was posted in 1970's, Hard Candy and tagged 1970's, 1970's candy, 70's, candy collecting, candy collection, candy collector, candy wrapper collection, candy wrapper collector, collectible, collecting candy, confectionery, confections, Dum-Dum, lollipops, packaging, pops, Spangler, suckers, sweets, vintage candy wrapper, wrapper, Zodiac. Bookmark the permalink.