Back in 1993, M&M/Mars built a seasonal promotion around a group of animated characters from a television special called The Last Halloween.  Today I thought it would be fun to take a look at that brochure and maybe a little of that old TV special, too.

The promotional brochure was designed like a pocketed file folder with an unfolding main section highlighting the various sizes of multipack offerings available to retailers.  Here’s the cover, showcasing the characters interacting with the M&M/Mars products: 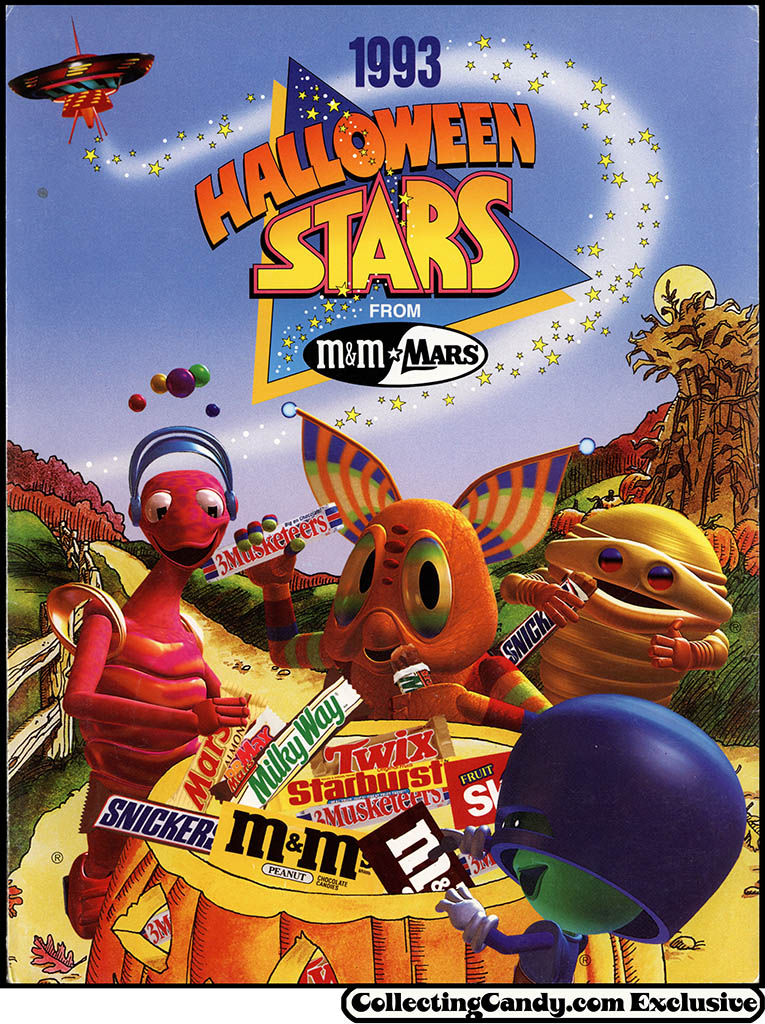 When unfolded, the brochure creates a long single scene: 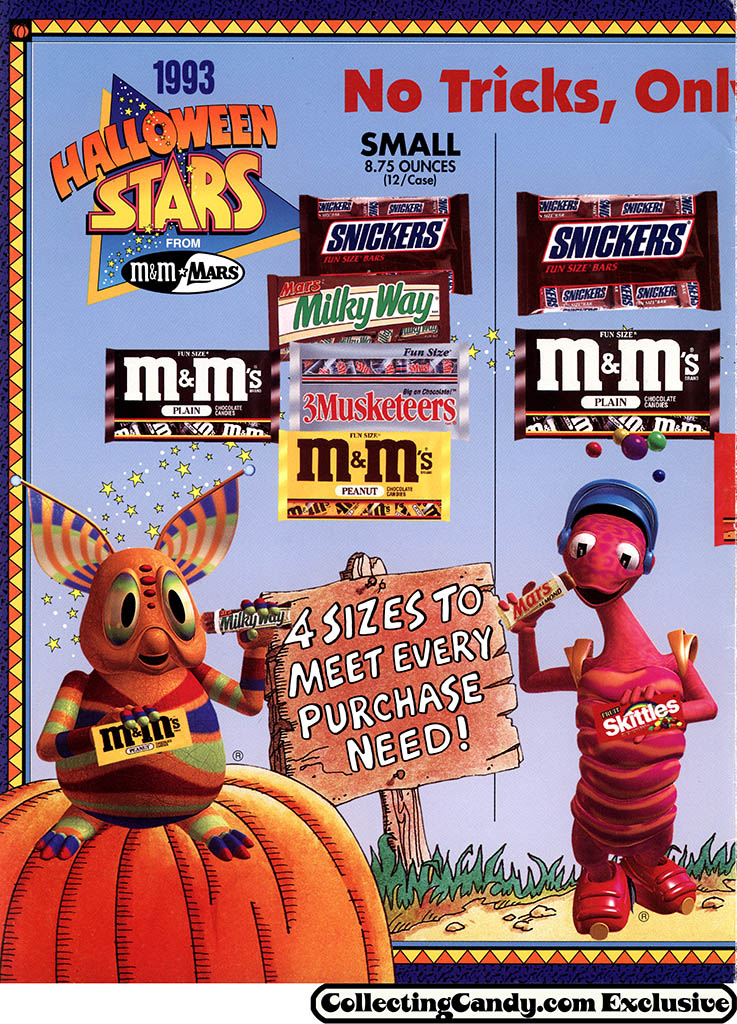 I really dig the PB Max Fun Size pack on this next page – I’ve never come across any of those before! 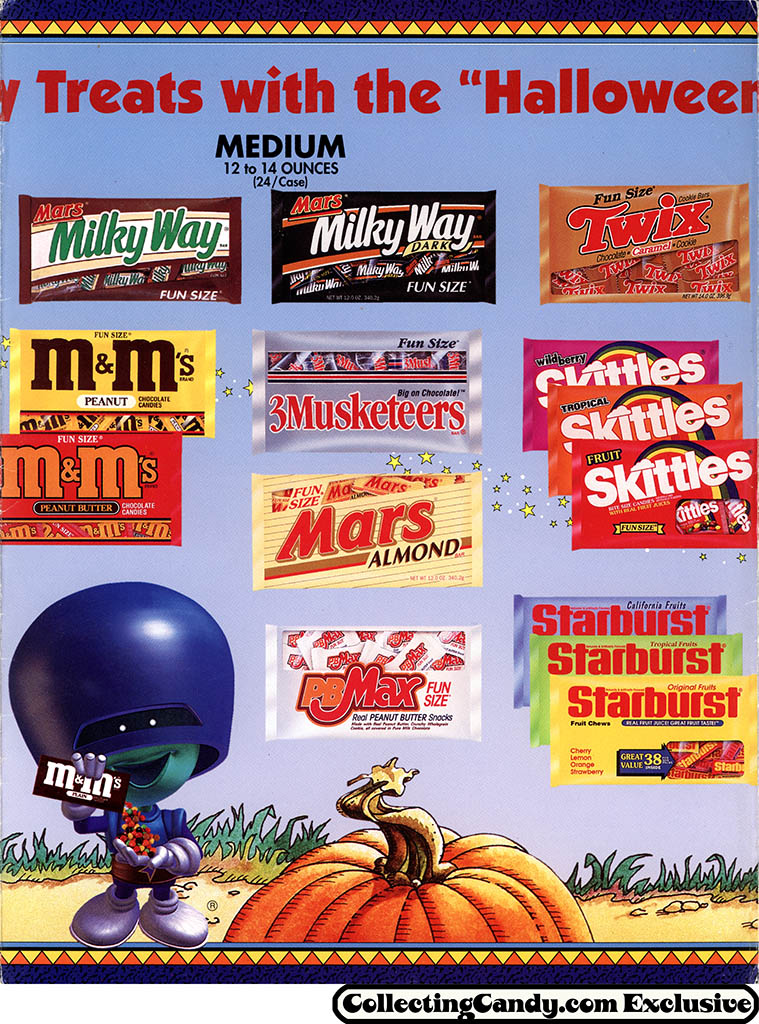 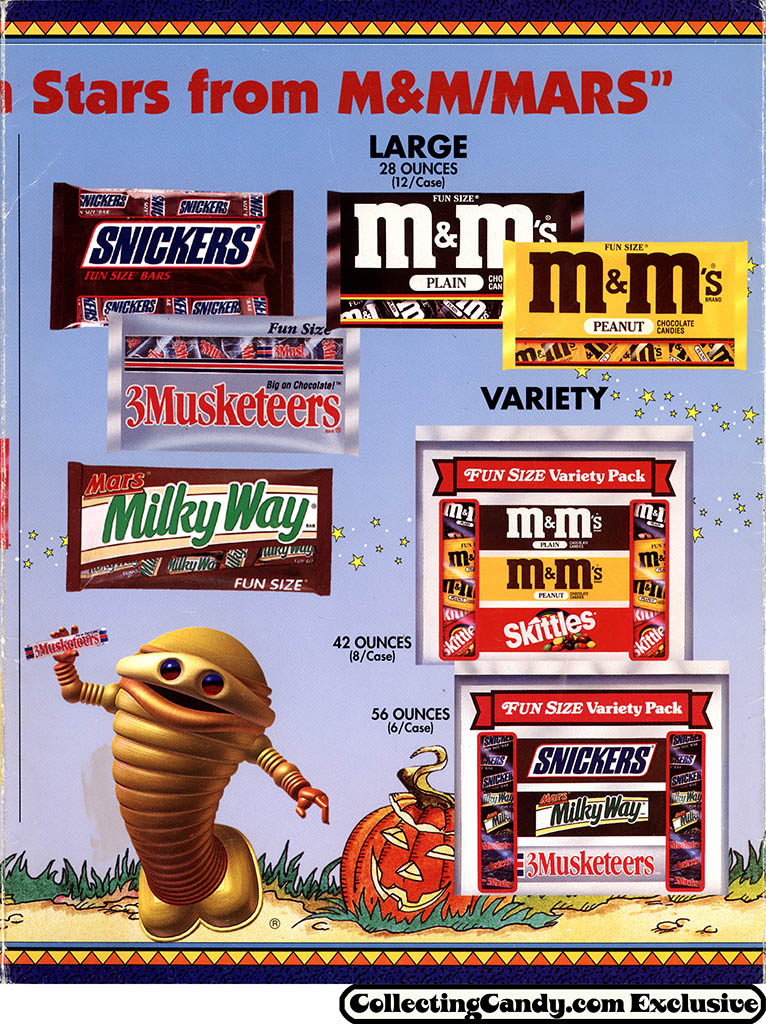 [Note: I don’t have an isolated close-up of page 5, as it is just the pocket page and has no product.]

The back side of the unfolded brochure describes the supporting campaign that M&M/Mars would be doing for the Halloween Stars promotion: 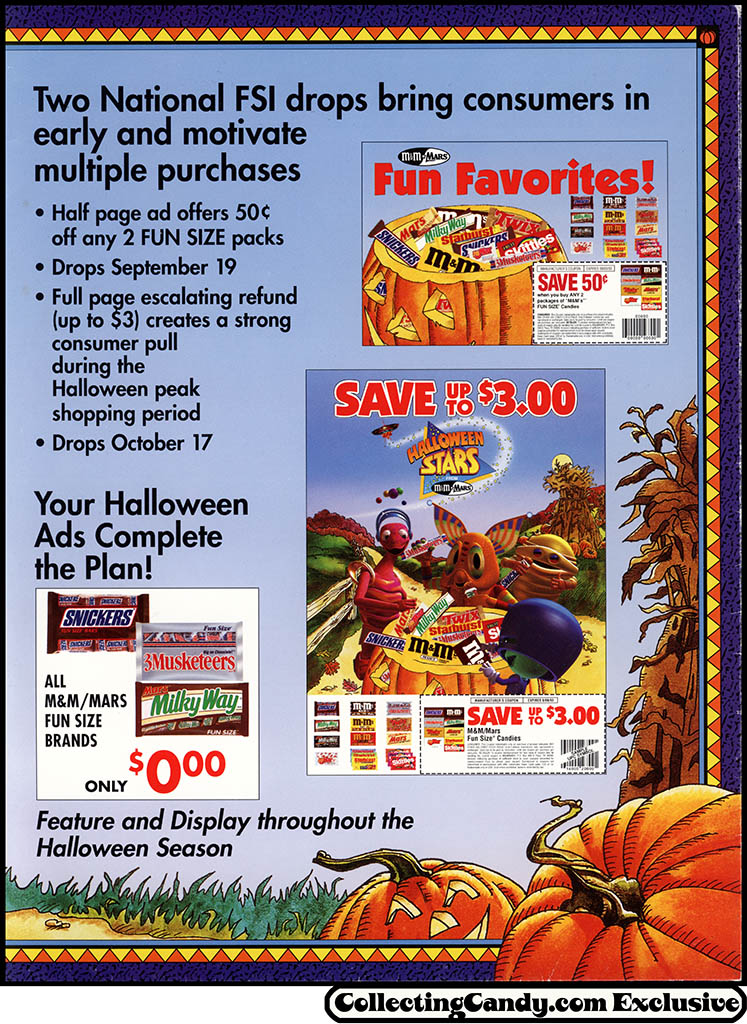 The back cover of the brochure highlights the The Last Halloween TV special tied into this promotion.  The alien characters featured in the special were created and owned by M&M/Mars, so that would seem to indicate that the special was created in association with the confectioner’s marketing plans. 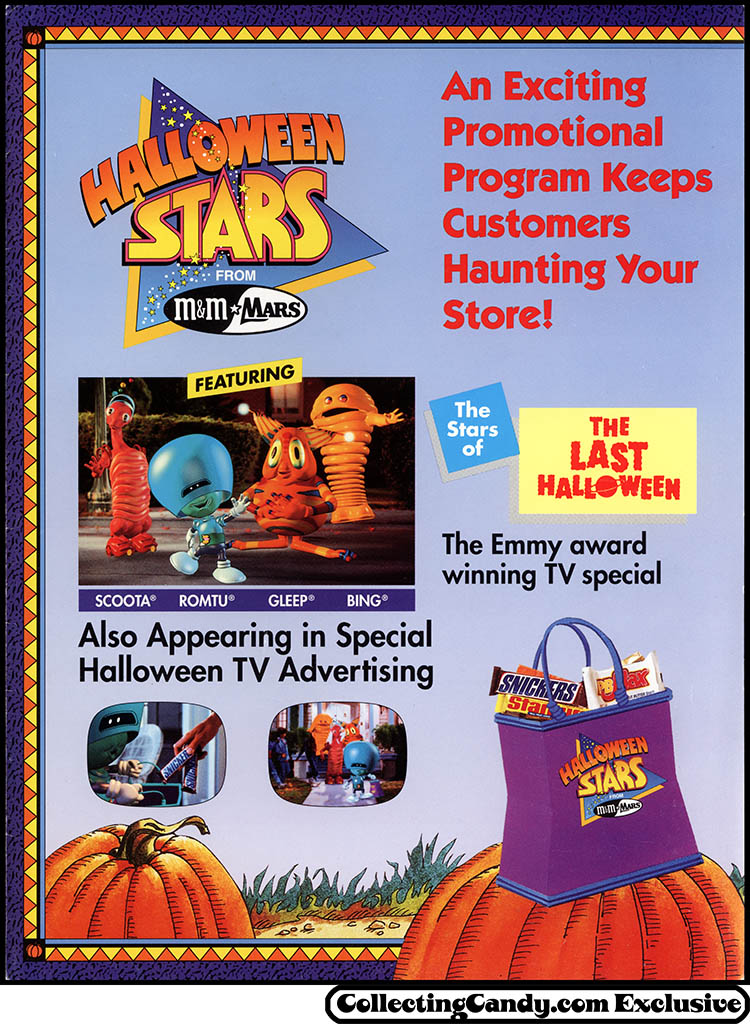 Inserted into the fold-out folder were a few additional pieces of paperwork, including two promotional flyers.  The first one focused on pallet style product display offerings.

One oddball flyer included in this packet was for large Halloween containers.  These might be familiar to some of you as I believe M&M/Mars continued to use them for many years.  I love tracking down pieces like this that put items into their historical marketing context: 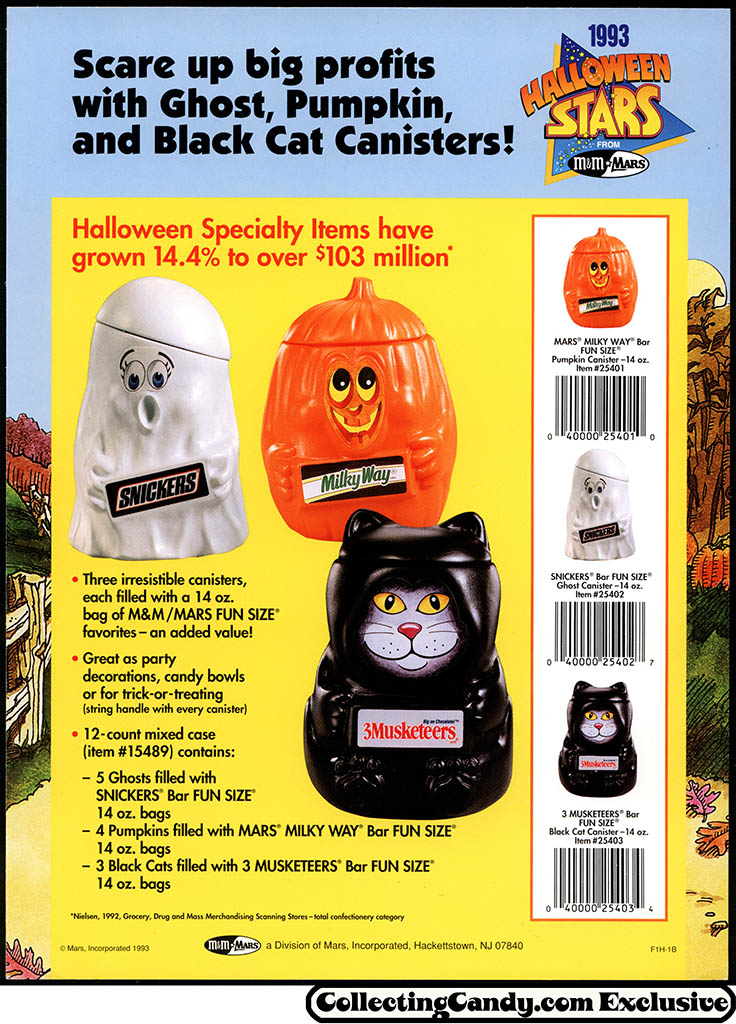 The last item from the brochure I have to show is a clip-art ad slick, featuring the four characters from the TV special.   This could have been used by retailers to create custom newspaper ads.  Since they were owned by M&M/Mars, I’d consider this group of characters as candy mascots of sorts.  The characters are named Scoota, Romtu, Gleep, and Bing: 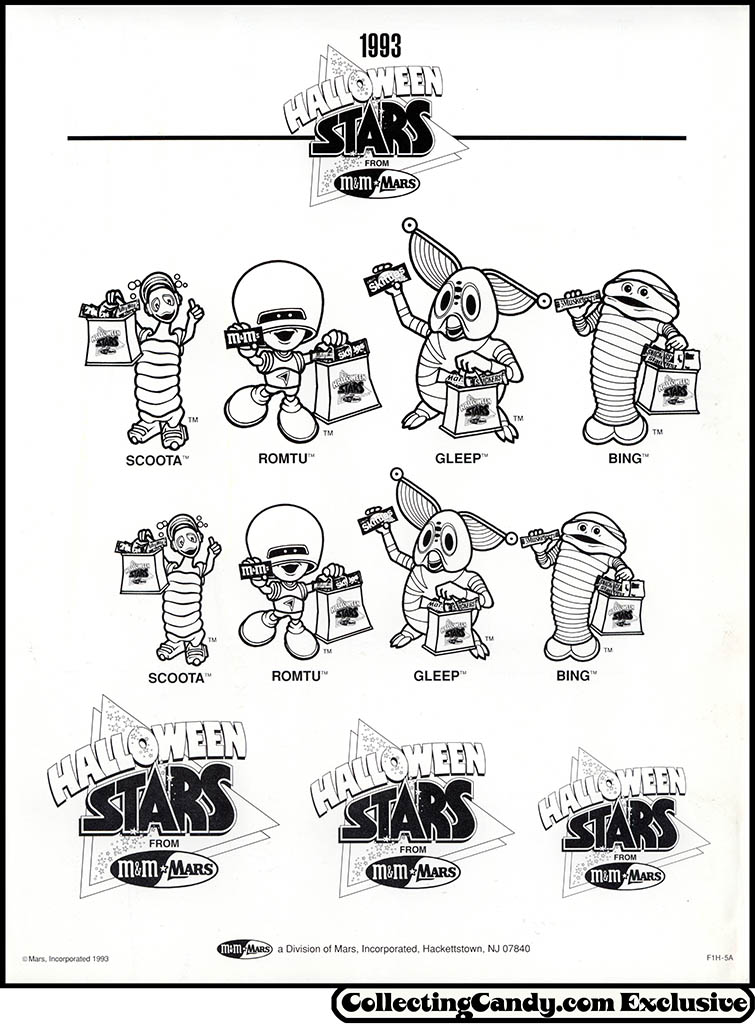 Here’s a shot of just the four characters: 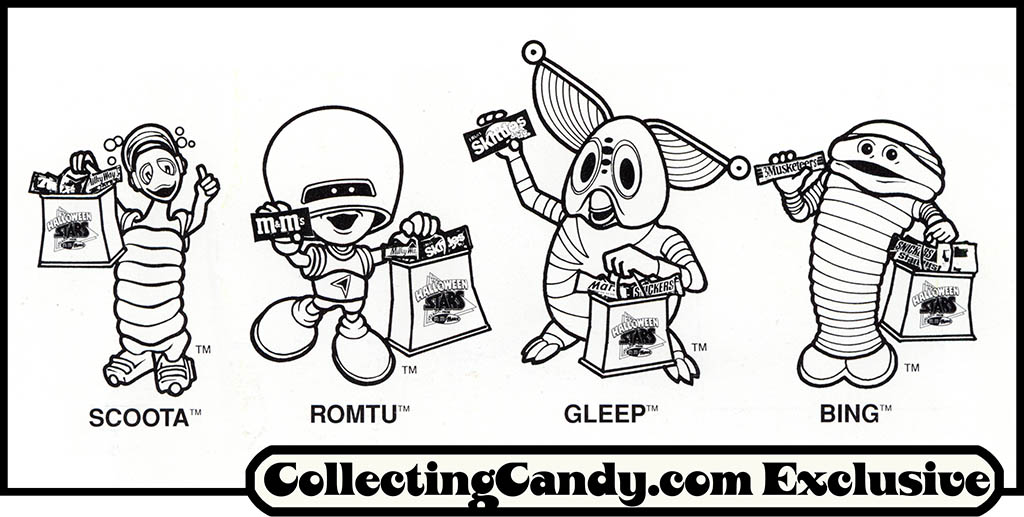 That’s the full content of the promotional brochure and folder.  I do have one more thing to share, which I found on YouTube:  It’s the original The Last Halloween TV special!  Within it you’ll find Scoota, Romtu, Gleep and Bing in action — check it out:

And that’s everything for today’s post on M&M/Mars 1993 Halloween Stars promotion.  See you next time!

A New York City based writer, editor and sometimes actor. After spending much of the 1990′s in the comic book business helping tell the stories of Marvel Comics’ X-Men as series editor, he has since split his time between developing his own entertainment properties while still consulting and working on others. Having been described as “the Indiana Jones of lost and forgotten candy”, Jason is one of the country’s premier candy collectors and historians with his discoveries appearing in countless blogs, magazines, newspaper articles, and books. Always happy to share his knowledge and unique perspectives on this colorful part of our popular culture, Jason has consulted with New York’s Museum of Food and Drink and has also been a featured guest on Food Network’s Heavyweights, France’s M6 Capital, and New York’s TheActionRoom.com. My Google Profile+
View all posts by Jason Liebig →
This entry was posted in 1990's, CountdownToHalloween, Halloween, M&M's, Mars and tagged 1990's candy, 1990's Halloween, 90's candy, 90's Halloween, candy collecting, candy collection, candy collector, candy wrapper collection, candy wrapper collector, collectible, collecting candy, confectionery, confections, Halloween candy, packaging, sweets, vintage candy wrapper, wrapper. Bookmark the permalink.