Count Chocula: he’s one of the edgy rock stars of the cereal mascot world and because of that I thought he was also the perfect spokesman to feature for a Countdown To Halloween post.  And just to be clear; I’m not branching out into cereal here on the site – our laser focus remains on candy – and that includes today’s coverage.

That being said, I’d like to look into some of the curious candy connections that Count Chocula has made over the years, with a few other Monster Cereal tidbits thrown in for good measure.

The earliest confection-connection to Count Chocula I could find dates back to 1982 and comes from north of the border up in Canada.  Up there, the “Big Face” Count Chocula box design was still being used (though it had already been retired in the USA by then).  On the following box from 1982, the “free inside” offer was for two packs of Fleer Dubble Bubble bubblegum: 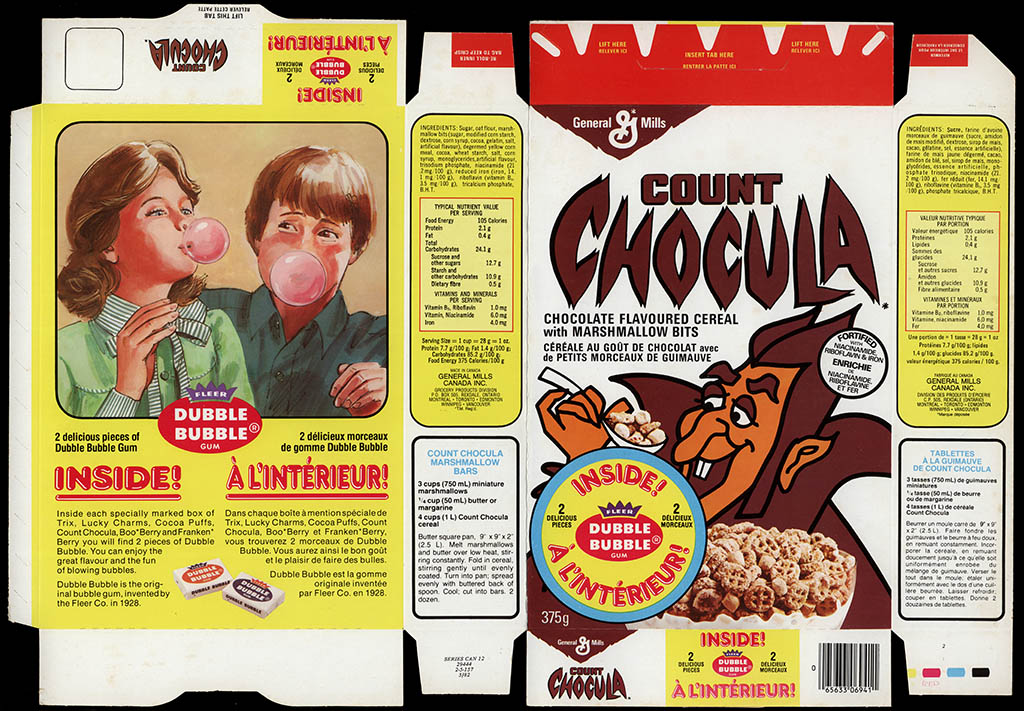 I think that’s a great example of an early candy tie-in for the Count.

The following year in the United States, Count Chocula received a similar bubble gum tie-in.  But this time instead of Fleer it was Donruss and instead of Dubble Bubble it was that brand’s major competitor; Super Bubble.

It’s always fun to see a monster mascot interacting with the in-box premiums offered, and in this case we get all three of them chewing Super Bubble gum and hanging out in their mail-away castle!  It doesn’t get much better than that.

Next up is a box I have in my collection from 1985 which stands as my favorite candy-related cereal piece.  It’s Count Chocula with an in-box offer for Willy Wonka Wacky Wafers.  Not only that, but this box features a mail-away coupon for the Willy Wonka Fun Club! 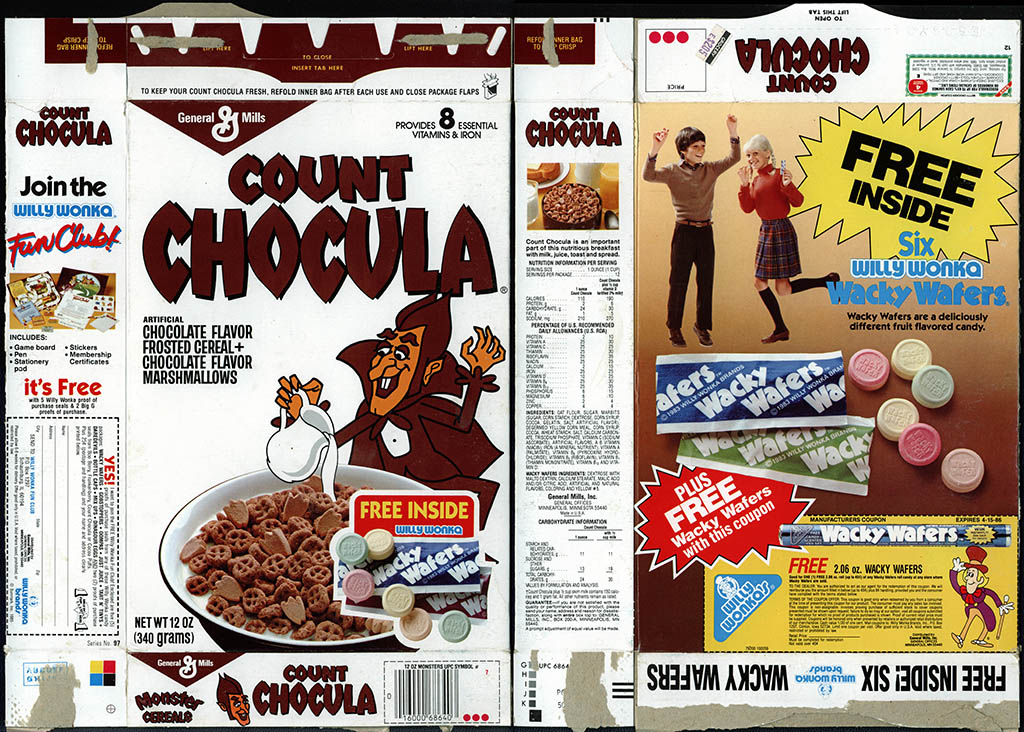 Eight years later, Count Chocula would continue his sugary flirtations by including a pack of gummy spiders candy with each box of cereal.  [Note: I don’t know if they created any special packaging for the included Gummi Spiders – or if it was no-frills.  I’d like to find out!] 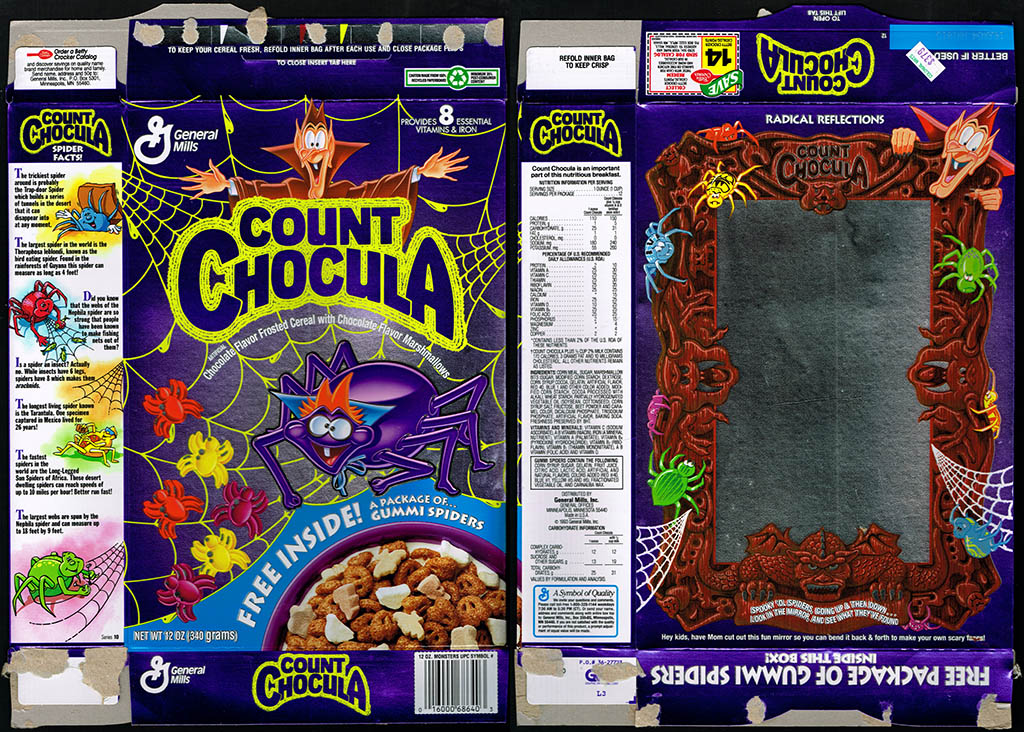 In 1997, Chocula was giving away Hot Wheels and Barbies rather than candy, but he did claim to be using Hershey’s Cocoa in the manufacture of his breakfast offering, so I think it “counts” – ha!: 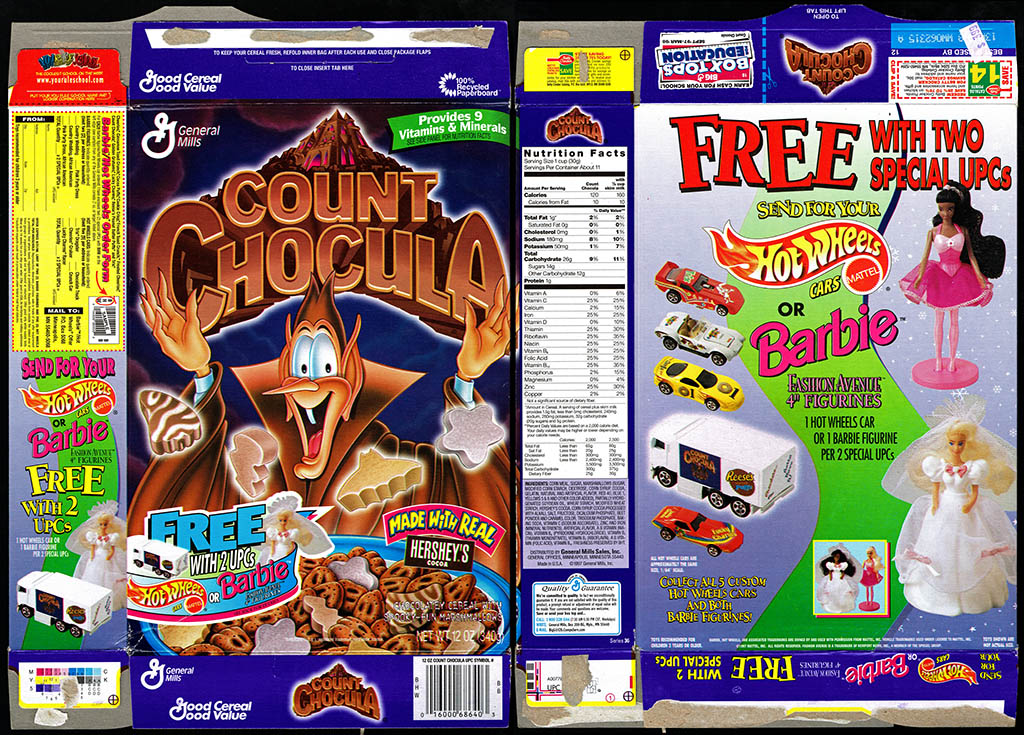 Jumping ahead just a single year to 1998, the Halloween edition Count Chocula box sported a great coupon for multi-packs of Hershey’s candies.   The box art also features the trio of Monster Cereal mascots trick-or treating [Note: Don’t miss a young Hillary Duff as Wendy on the front of the box!]:

For my last candy-to-Count Chocula connection, I offer up what I believe is a new introduction for Halloween 2013:  Count Chocula cereal treat bars:

Cereal bars are a tough item to categorize.  They’re as much “snack” as they are “confection” so I’m hesitant to definitively call them a candy bar, but rather refer to them as a snack bar.  Still, today I think they’re an applicable inclusion for today’s article.   With that in mind, here’s an individual wrapper for Count Chocula’s Treat bars: 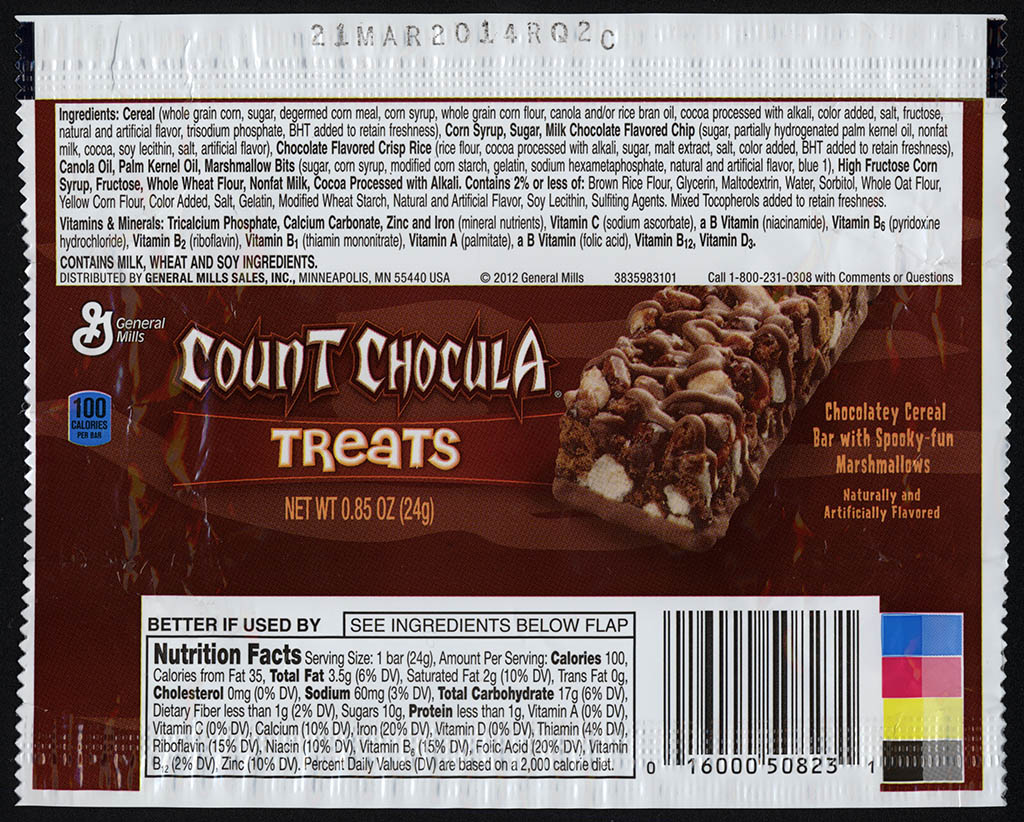 And that concludes my candy-to-Count Chocula tie-ins, but it’s not the end of today’s post.

I thought I might share a little more, since this is the Countdown To Halloween after all, and Count Chocula is so much fun.

This year, the three core Monster Cereals (Count Chocula, Franken Berry and Boo Berry) returned for the Halloween season with two old friends in tow; Frute Brute and Yummy Mummy.  Those two fruit-flavored cereals had been discontinued since the early 80’s and early 90’s respectively, so it was a thrilling surprise to learn of their return. 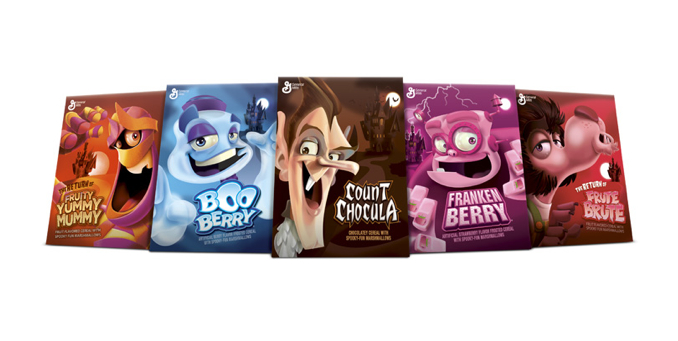 To say that the news was welcomed with quite a bit of celebration by myself and my fellow cereal enthusiasts (yeah, I love cereal, too) would be an understatement – we were blown away.  But even bigger news was soon to follow.

Only days after we had learned of the contemporary return of Yummy Mummy and Fruit Brute, rumors began to swirl that retro boxed versions of all five would be Target exclusives this Halloween season.  It sounded too groovy to be real, but it was 100% true.  And when I realized it, my mind was blown.

Soon the official press release verified the amazing news… that the classic 1970’s Monster Cereal box designs (the classic 1980’s design where Yummy Mummy is concerned) would all be returning as Target store exclusives. 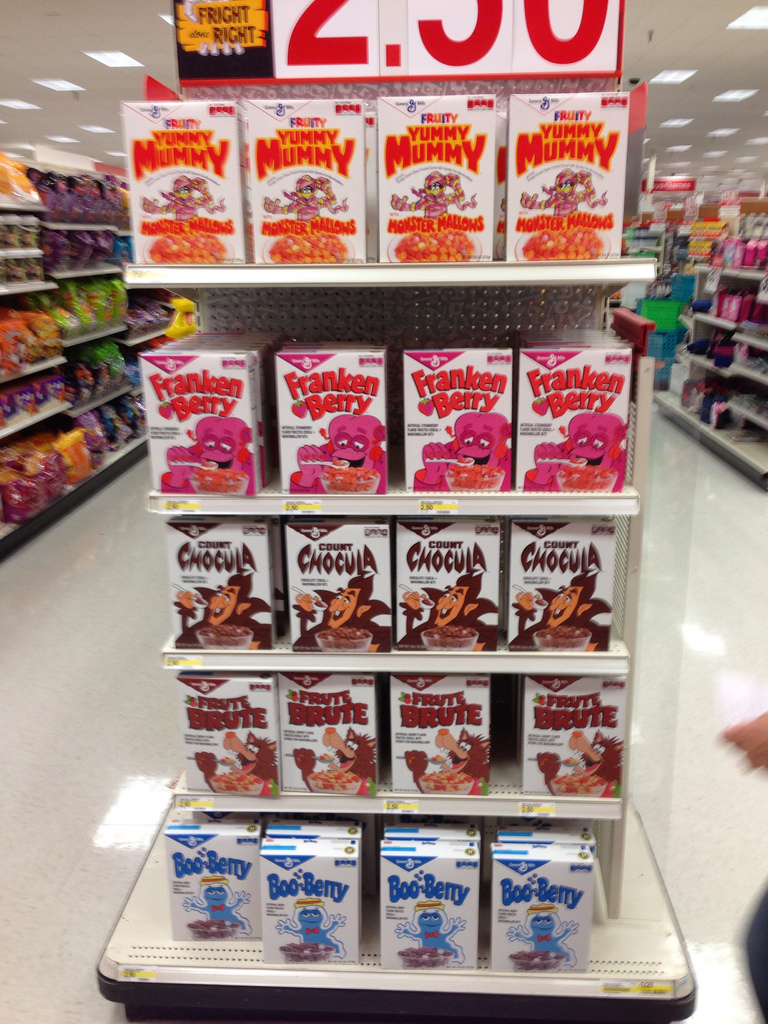 So in an explosion of awesome retro marketing, the original “big face” monster family of cereal boxes have returned to store shelves for Halloween this year.  And that ranks as the coolest group of retro-packaging I’ve ever seen.  It’s certainly made the 2013 Halloween season a particularly fun one.

Before I sign off today, I had a few more Count Chocula boxes I wanted to share from my collection.  These aren’t candy related but they all seem to celebrate the Halloween holiday as all three feature some kind of mask: 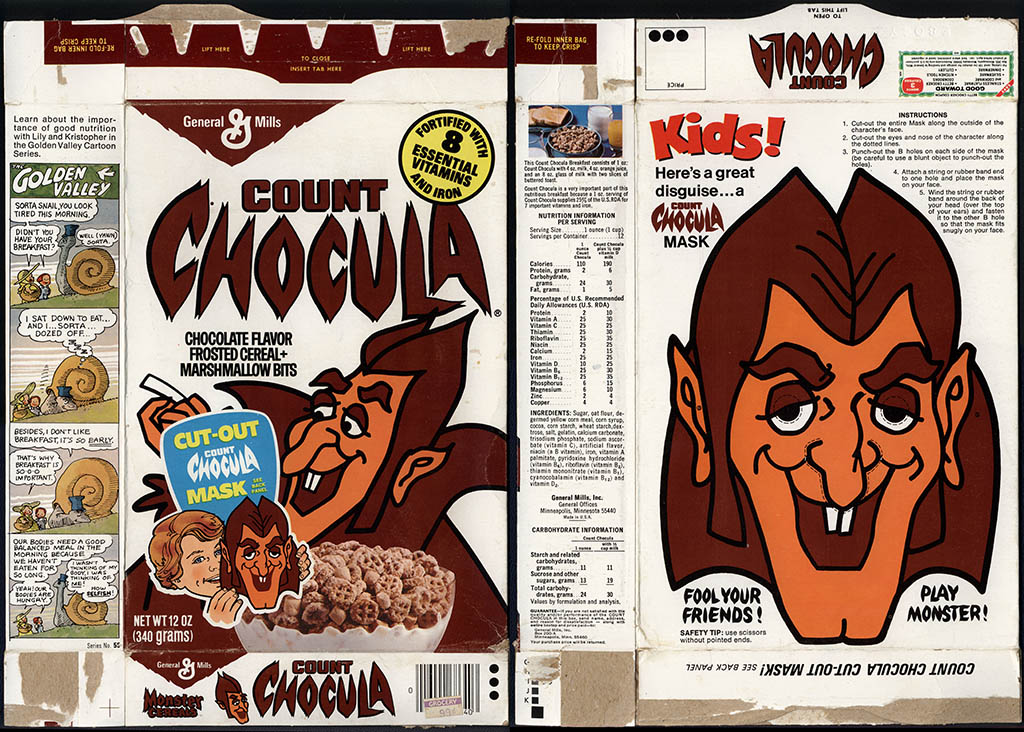 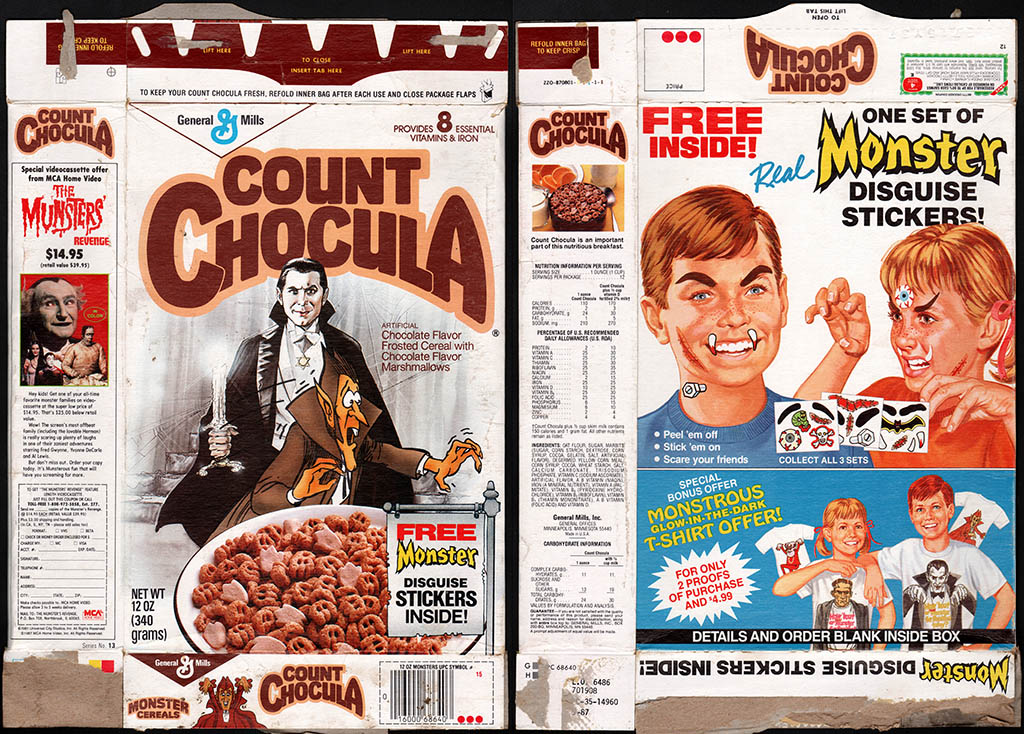 And with that, my coverage of Count Chocula and his candy connections has concluded.

A New York City based writer, editor and sometimes actor. After spending much of the 1990′s in the comic book business helping tell the stories of Marvel Comics’ X-Men as series editor, he has since split his time between developing his own entertainment properties while still consulting and working on others. Having been described as “the Indiana Jones of lost and forgotten candy”, Jason is one of the country’s premier candy collectors and historians with his discoveries appearing in countless blogs, magazines, newspaper articles, and books. Always happy to share his knowledge and unique perspectives on this colorful part of our popular culture, Jason has consulted with New York’s Museum of Food and Drink and has also been a featured guest on Food Network’s Heavyweights, France’s M6 Capital, and New York’s TheActionRoom.com. My Google Profile+
View all posts by Jason Liebig →
This entry was posted in 1970's, 1980's, 1990's, Bubble Gum, Canadian, Chocolate, CountdownToHalloween, Fleer, Gum, Gummies, Halloween, Hershey, Holiday and tagged 1970's cereal, 70's cereal, candy collecting, candy collection, candy collector, candy wrapper collection, candy wrapper collector, cereal box collecting, collectible, collecting candy, confectionery, confections, Count Chocula, General Mills, mascot, Monster Cereals, packaging, sweets, vintage candy wrapper, vintage cereal box, vintage cereal boxes, wrapper. Bookmark the permalink.

8 Responses to Candy, Count Chocula and Halloween (Oh My!)